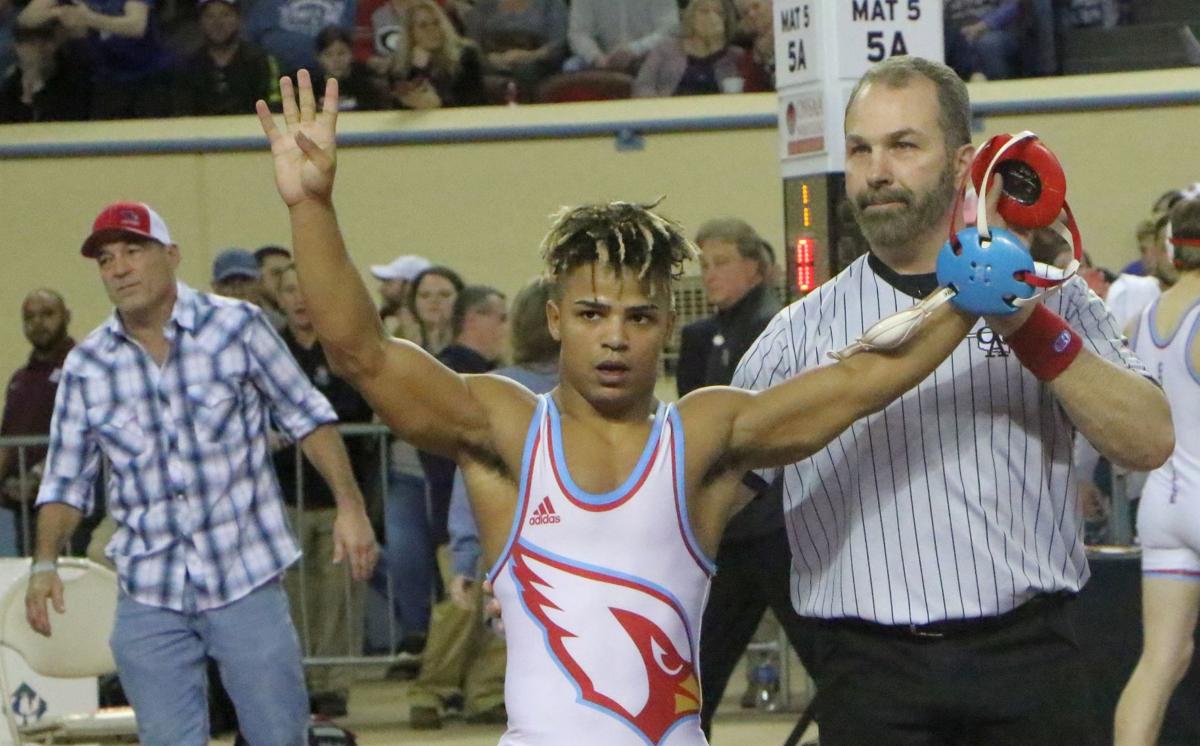 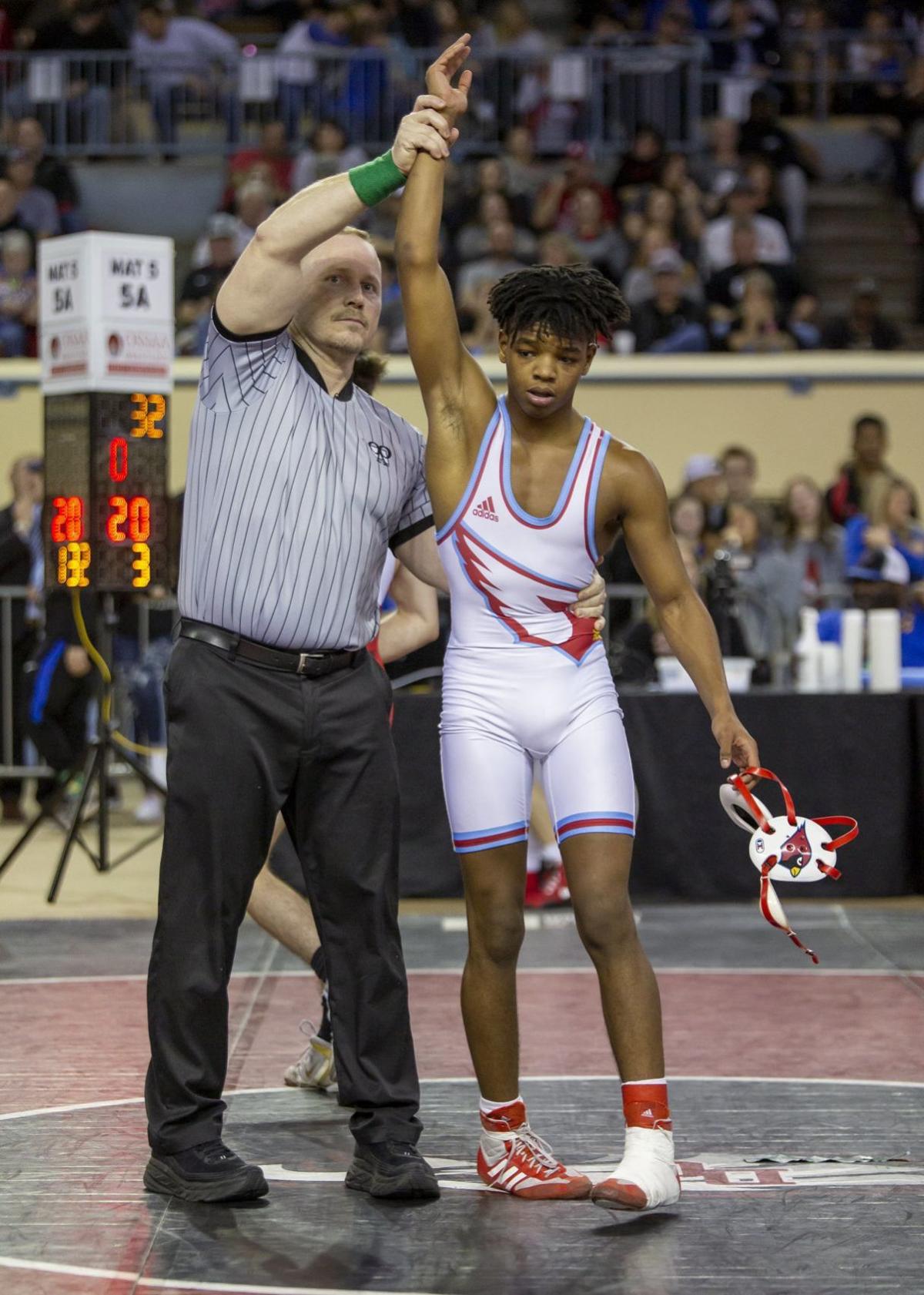 Collinsville's Jordan Williams celebrates winning the Class 5A 126 weight class during the Oklahoma State Wrestling Championships at the State Fairgrounds in Oklahoma City on Saturday. TANNER LAWS/For the Tulsa World

OKLAHOMA CITY — Former Collinsville wrestling standout Gary Wayne Harding was in the building Saturday to root on his alma mater on the final day of the Class 5A state tournament.

Cardinals senior Caleb Tanner was one of those Harding personally spoke with before his 132-pound final at the State Fairgrounds Arena. Tanner went on to defeat Connor Riddles of Duncan 8-3 and claim his fourth state championship.

The OU signee became the third Collinsville wrestler to win four state titles and the first since Harding and Will Stelzlen completed the feat in 2014.

“It’s exciting and nerve-racking,” said Tanner, who completed his first unbeaten season in high school with a 30-0 mark and became the 39th four-time champion in Oklahoma. “When they announced ‘Caleb Tanner, a four-time state champion,’ it was like ‘Oh, wow.’ ”

Tanner was one of four individual champions for Collinsville, which extended its dominance with a ninth team title in 10 years. Cameron Steed (113), Troy Spratley (120) and Jordan Williams (126) also claimed individual titles for the Cardinals, who outscored Highway 20 rival and second-place Skiatook 156-129, one year after the teams tied for the championship.

Collinsville sent seven wrestlers to the finals and finished with eight placers. Despite holding on to the No. 1 ranking in 5A throughout the season, the Cardinals won just two team titles, last week’s east regional and the state tournament.

“We had a tough scheduled and, basically, we try to peak our kids at the right time at regionals and state,” Cardinals coach Wes Harding said. “Every match is the most important match we wrestle this whole year.”

The win capped a 37-0 season for Spratley, but the sophomore said an unbeaten season was never his motivation.

“I just take it one match at a time,” Spratley said. “I don’t focus on what my record is. I just go out there and score points.”

Collinsville essentially wrapped up the team title with a 45-point lead over Skiatook after Friday’s action. The Bulldogs could not close the gap, though they did finish a perfect 4-for-4 in the finals.

Juniors Josh Taylor (138) and Cougar Anderson (160) claimed their third state titles and Brody Gee (106) and Richie Lee (170) also came away with individual crowns for the Bulldogs.

“When you’re just outmanned, you’re outmanned,” Skiatook coach Jake Parker. “We did just about all we could do.”

Taylor’s win over Drake Acklin of Collinsville was one of the more dramatic finals of the evening. Taylor trailed 3-1 through the first two periods, then got a sudden reversal to open the third and, seconds later, he pinned Acklin.

“I kind of just trusted the process,” said Taylor,

who finished 16-2. “I didn’t really think about being down. I just kept wrestling.”

While Collinsville and Skiatook dominated in 5A, Edison’s Whitney Azlin won a 5-3 decision over Coweta;s Caleb Phillips in the finals at 285. Not only was it the first state title for the Eagles senior, Azlin also placed in three trips to state.

“I worked my butt off all season to get to where I am today,” said Azlin, who compiled a 37-4 record.

Considering Broken Arrow had the most chances, it’s fitting the Tigers qualified the most finalists in Class 6A.

The junior star has led her team in every game she has played this season, and is averaging 17.2 points per game. She also recently joined the 1,000-point club.

Pairings for area basketball tournaments that start Thursday in 6A-2A

Area tournaments will continue through Saturday.

Collinsville's Jordan Williams celebrates winning the Class 5A 126 weight class during the Oklahoma State Wrestling Championships at the State Fairgrounds in Oklahoma City on Saturday. TANNER LAWS/For the Tulsa World