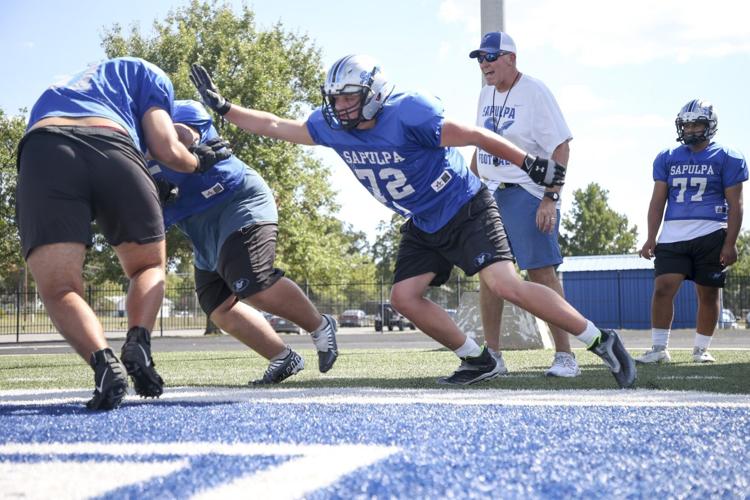 Pictured during a 97-degree practice session on Tuesday, David Alexander is Sapulpa’s first-year offensive coordinator and offensive line coach. In 2018, he coached the Broken Arrow Tigers to the only football state title in that school’s history. 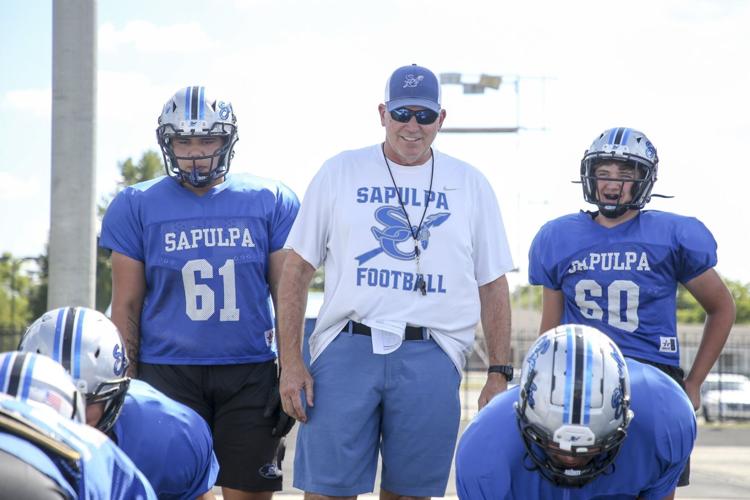 Offensive coordinator David Alexander and the Class 5A seventh-ranked Sapulpa Chieftains followed an opening-night loss to Sand Springs with victories over Tahlequah and Bartlesville. In a District 5A-3 opener on Friday, Sapulpa visits Durant.

The most historically significant of the rings — and, presumably, the most personally gratifying — was the one he got as the head coach of Broken Arrow’s 6AI championship squad.

On Nov. 30, 2020, a few days after a Tiger playoff loss to Union and a 7-4 finish that season, it was announced that the Broken Arrow Public Schools had dismissed Alexander as its head football coach.

It was a jarring story because Alexander wasn’t just from Broken Arrow; he was synonymous with Broken Arrow. As a 1982 Broken Arrow High School graduate, he was an All-State offensive lineman.

While at the University of Tulsa, he was an All-Missouri Valley performer. In spite of three knee surgeries, he had a nine-year NFL career (eight seasons with the Philadelphia Eagles and one with the New York Jets). When a Broken Arrow High School athletics Hall of Fame was created in 1995, Alexander was a member of the inaugural class.

Before Alexander was hired in 2014, no Broken Arrow grad had been the Tiger head man since Frank Banfield during the ’70s.

“This is where I wanted to be,” Alexander said at the time. “This is home.”

“I’m just continuing to follow in Allan Trimble’s footsteps,” Alexander said. “He was a math teacher, also. He taught geometry.”

During Tuesday’s 97-degree practice session, Alexander was as energetic as anyone at George F. Collins Stadium. After practice, he was asked whether he still has scar tissue from having been fired at Broken Arrow.

He replied by saying he still is wounded.

“I’m not scarred up yet,” Alexander said. “That’s why I’ve buried my head into teaching and coaching. I’m a good teacher, and I know I’m a good offensive-line coach.”

Alexander also was asked whether he wants or expects another shot at a head-coaching assignment.

“I don’t know if (a head-coaching) opportunity will ever arise for me again, after what BA did. I just don’t know.”

As he considered options for a post-Broken Arrow life in football, Alexander says he sought advice from coaching friends like Loren Montgomery, Dub Maddox and Kirk Fridrich. Before he scored the BA head-coaching job, Alexander was a longtime member of Trimble’s Trojan staff.

At BA in 2018, Tim Holt Jr. was an Alexander assistant. Holt now is the Sapulpa head man and leans on the experience of two new staff members who were successful head coaches: the 58-year-old Alexander and 62-year-old linebackers coach Pat McGrew, who in 11 head-coaching seasons at Bixby (1999-2009) drove the Spartans to three championship-game appearances.

“(Alexander) can answer my questions before I even ask them,” Holt said. “In-game adjustments — he’s unbelievable. We just have a connection that’s awesome, and the kids love him.”

Said Alexander: “My relationship with Tim is 97% of the reason why I’m in Sapulpa. I believe in Tim and what he’s trying to do here, and I wanted to coach my own position group — a group I could watch film with and really teach them.

“The mission here with Tim is to teach these guys how to win. Teaching players how to win is a lot harder than teaching X’s and O’s.”

Since losing to rival Sand Springs on opening night, Sapulpa has rebounded with victories over Tahlequah and Bartlesville. This week, Sapulpa is ranked seventh in Class 5A. On Friday, the Chieftains visit winless Durant.

After being prepped to face Durant’s wishbone-based option offense, the Chieftains had a little fun at the end of the Tuesday practice. Sapulpa star Tre Morrow is a senior who turned 18 that day. As Holt concluded his post-practice address to the team, two assistant coaches dumped a water-filled cooler on Morrow’s head.

After the Durant trip, Sapulpa braces for District 5A-3 tests against third-ranked Coweta (Sept. 30), at fourth-ranked Del City (Oct. 7) and against top-ranked McAlester (Oct. 28).

Alexander was a staff member with several additional teams that finished as the state runner-up, so he is a veteran of the most meaningful games — the ones played in November and December. As the two-year head man of the Tulsa Talons arena team, he also got a taste of professional coaching. That experience now is a Sapulpa football program asset.

“(The condition of) my shoulders and knees won’t allow me to lift enough weights, so I do cardio and watch what I eat,” he said. “I won’t pass up a piece of pumpkin pie, but for the most part, I eat pretty healthy.”

During a hydration break on Tuesday, Sapulpa senior defensive lineman Anthony Papa approached Alexander and gave him a hug.

“These kids deserve 100% of me,” Alexander said. “I want to be thankful for what I’ve got now and what I’ve had. The kids here at Sapulpa are incredible.”

Alexander had Broken Arrow’s top job, and now he has a painful memory of how that experience ended. Whether another head-coaching opportunity might roll his way, he doesn’t know how his future might look.

It’s a beautiful condition, however, when you’re happy right now. In the moment. Alexander says all his 2022 focus is committed to his Sapulpa coaching colleagues, to his algebra students and to the sophomores who are his starting offensive tackles.

Alexander has bandaged his Broken Arrow wound and seems genuinely happy to be an educator and a ball coach in Sapulpa.

Whether in Sand Springs, Bartlesville or Bixby, people know him — and not for his football play.

Stillwater was kind to the overmatched OKC U.S. Grant football program, and still there was an 85-point shutout.

Verdigris edged Central 35-32 while Lincoln Christian won 14-7 at Berryhill. Central moved up to No. 9.

Sand Springs rallied from a 27-0 deficit and trailed only 27-26 entering the fourth period, but the Sandites wound up with a total of 16 penalties.

247 Sports analyst Eric Bossi: “I think (Parker Friedrichsen) is just scratching the surface of what he can be down the road."

The Eagles were a perennial playoff team until winless seasons in 2018 and '19.

Most teams are playing district openers in Week 4.

Extra Points podcast: It's the Saturday of the year so far in this state

Extra Points podcast: It's the Saturday of the year so far in this state

Aaron Rodgers has his say on the NFL's greatest ever coach

Aaron Rodgers has his say on the NFL's greatest ever coach

Pictured during a 97-degree practice session on Tuesday, David Alexander is Sapulpa’s first-year offensive coordinator and offensive line coach. In 2018, he coached the Broken Arrow Tigers to the only football state title in that school’s history.

Offensive coordinator David Alexander and the Class 5A seventh-ranked Sapulpa Chieftains followed an opening-night loss to Sand Springs with victories over Tahlequah and Bartlesville. In a District 5A-3 opener on Friday, Sapulpa visits Durant.