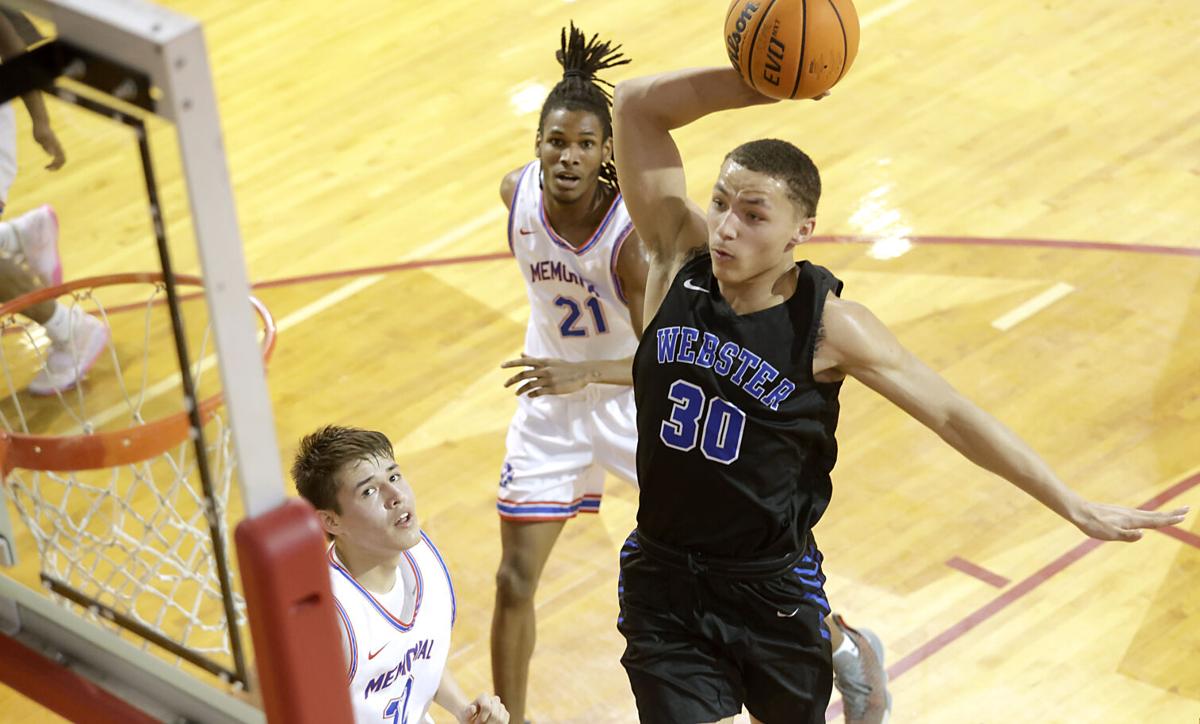 Webster’s Anthony Pritchard converts on a dunk during a recent game at Memorial. In his quest to lead the Warriors back to the Class 4A state tournament, he averages 23.3 points, 7.1 rebounds and 4.9 assists per game. 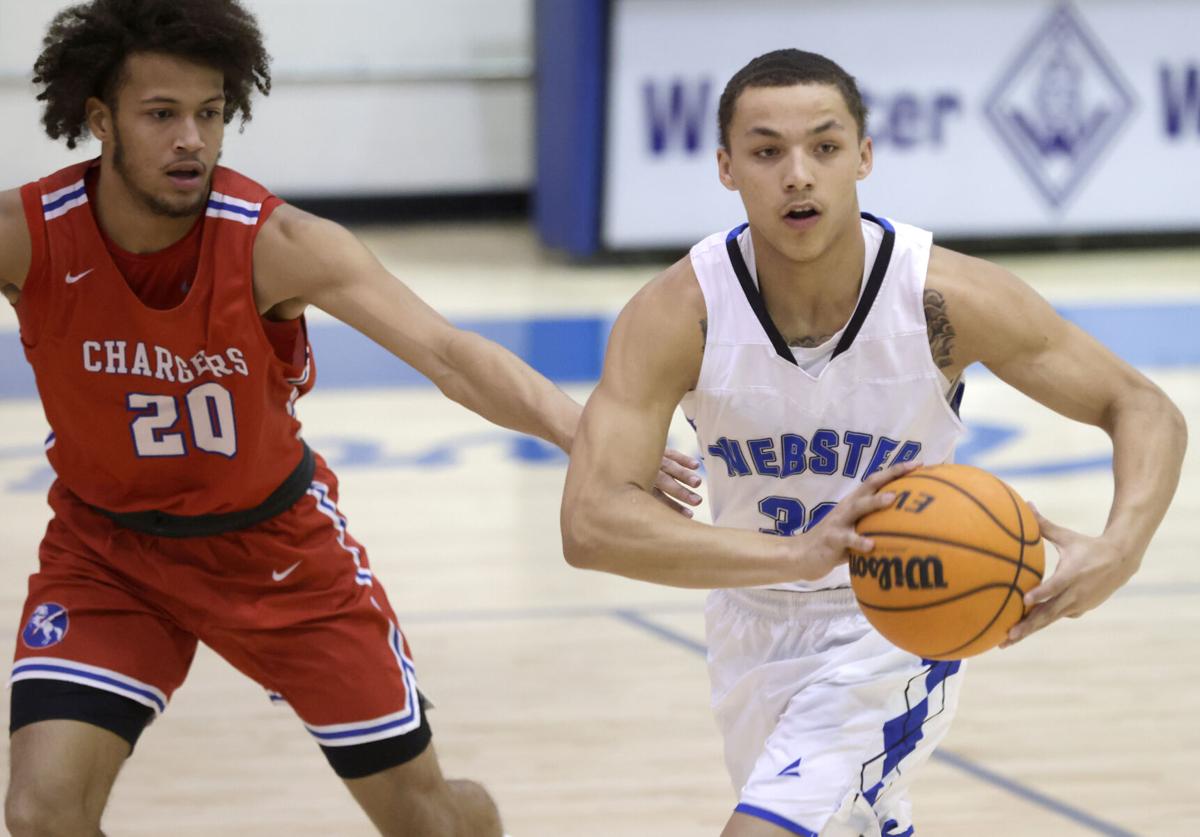 Webster's Anthony Pritchard (right) is pictured during a home victory over Memorial. He has signed a national letter of intent to play basketball at Tennessee Tech of the Ohio Valley Conference. 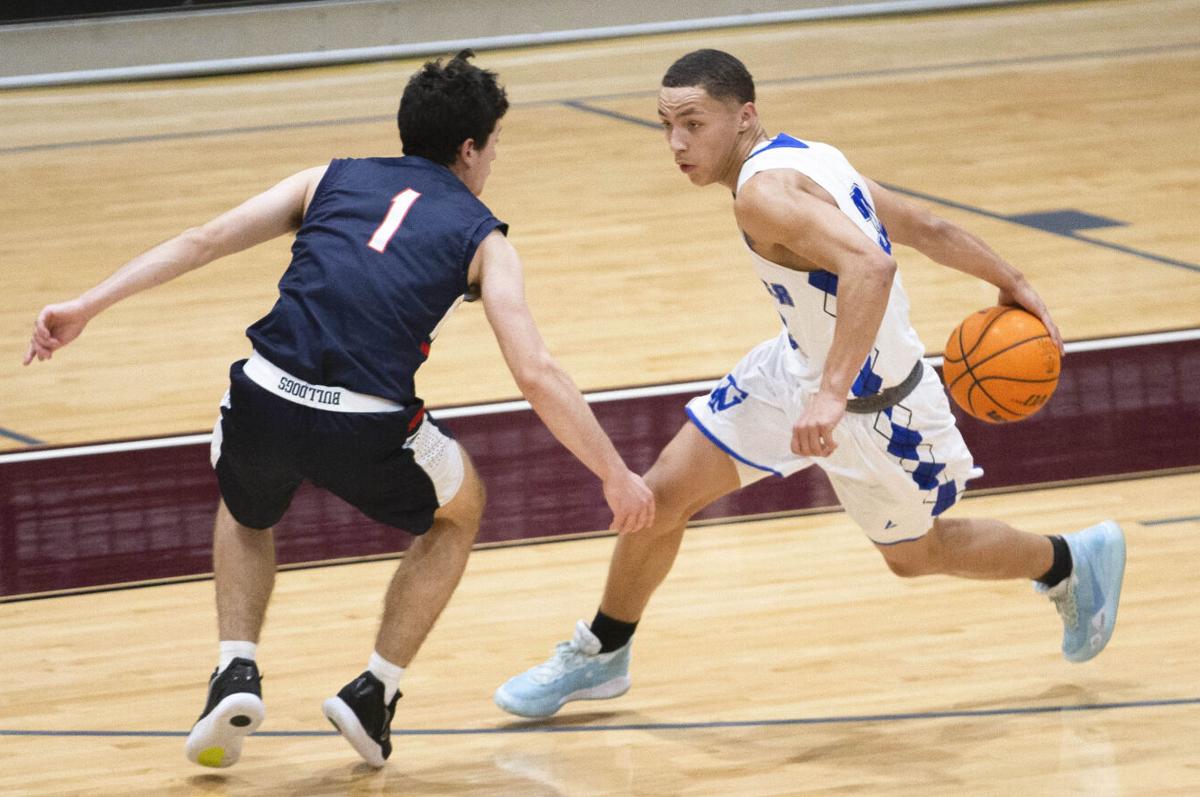 My new favorite basketball player is Anthony Pritchard, a Webster senior for whom there hasn’t always been the security of consistent food or housing.

Over the year, as I became increasingly aware of Pritchard as an elite high school player, I would ask coaches about his major-college viability. The coaches would reply with praise of Pritchard the person. They say he’s a sweet-natured, universally liked guy who never complains about having been dealt a difficult set of life circumstances.

Recently, out of the blue, Pritchard sent a text message to Bowman: “I appreciate everything you do for me.”

“Anthony is an unbelievable kid,” said Rod Thompson, who has coached Pritchard on Playing With Purpose summer AAU teams. “He’s had some tough breaks, but he’s never angry or bitter.

“Unless you’re aware of the challenges he and his family have faced, you’d never know because he never complains. Always positive. Great teammate and a great player to coach. It’s awesome to see him succeed like this.”

The money Pritchard would make from summer yardwork wasn’t spent on headphones or signature shoes — status-symbol luxuries that so many kids take for granted.

“I would give that money to my mom for the light bill,” he explains. “We had to overcome some things. We moved around a lot. Not having lights. Not having food.

“We would go weeks without heat or (power). We used the oven for heat. I remember sleeping on a pallet on the kitchen floor. There were nights when we had no food at all. I wouldn’t eat again until I got breakfast the next morning at school. I would try to eat a lot at school because I knew there might not be anything at home.”

As a ninth-grader, Pritchard was a 5-foot-7, 130-pound freshman point guard for the Warriors. He became a more complete offensive weapon as a sophomore, and even more complete as a junior, and today — at 6-2 and 180 pounds — he’s one of the 10 best seniors in the state.

“I remember when Anthony was an eighth-grader, and I kept hearing about him being the Steph Curry of Tulsa junior high basketball,” Memorial coach Bobby Allison said. “I remember seeing him playing against the Memorial junior high team, and he didn’t miss a shot. It was obvious that he had a great touch.

“Since I became a Memorial assistant in 2006, we’ve competed against a lot of great players from Tulsa and around the state. I don’t know what Anthony’s ultimate level will be, but he would be one of the top five players we’ve played against in my time at Memorial. I’m talking about guys like Shake Milton, Bryce Thompson and Xavier Henry. Anthony makes those Webster players believe they can win every game.”

On Saturday night, the 13-5 Webster Warriors bused to Locust Grove for a regional clash with Stilwell. With a victory in that game, Webster would advance to an area-level opportunity to secure a third Class 4A state tournament berth in Pritchard’s four varsity seasons.

Because his development and physical growth were gradual, Pritchard was overlooked by most of the Division I college programs in and near Oklahoma. This season, he averages 23.3 points, 7.1 rebounds, 4.9 assists and nearly three steals per game, and in November he signed with Tennessee Tech of the Ohio Valley Conference.

Within two years, I bet a lot of college coaches will have the same thought: “I wish I had recruited Anthony Pritchard.”

“A lot of people have helped Anthony because he’s basically been on his own,” Bowman said. “I think he’ll go to Tennessee and be great, and then he can stay involved with basketball for the rest of his life.”

After I mentioned to Bowman that Pritchard’s game reminds of NBA star Damian Lillard’s, Pritchard mentioned to me that Lillard is his basketball role model.

Like Lillard, Pritchard is a clearly defined team leader who can get buckets from any place on the floor. Like the Thunder’s Shai Gilgeous-Alexander, Pritchard has tremendous body control. He can absorb a bump from a defender and still has the strength to finish the shot.

With a four-year scoring average of 19.7, Pritchard needs 27 more points to reach the 2,000 mark for his career. Additional career milestones: he needs four rebounds to reach the 500 mark and 12 assists to reach the 450 mark.

Instead of transferring to a bigger high school with a more high-profile program, Pritchard remained committed to Webster. He wants to be remembered for having driven Webster to its first basketball championship since 1966.

Pritchard says 13 years have passed since he saw his father, who resides in the New York-New Jersey area. Is his father aware that Pritchard has become such an accomplished, college-bound athlete?

“He has no idea,” Pritchard replied. “The next time I see him, I’ll tell him about it.”

When it was determined that Pritchard as a third-grader was thriving at an advanced pace, he was pushed ahead one year. He graduated to the fifth grade instead of the fourth. Before high school, he also played football and soccer. When he tried lacrosse, he immediately was good at it.

Pritchard’s favorite television show is A&E’s “The First 48”, the documentary series that frequently focuses on the Tulsa Police Department’s criminal investigations. “I think I’d be good at criminal profiling,” he says.

All of Pritchard’s interaction with his primary recruiter, Golden Eagle assistant Marcus King, has been by phone or Zoom conferencing. This is how recruiting happens: During the early ’90s, Marcus King and Rod Thompson were teammates on a state championship team at Beggs. Thompson has extensive knowledge of Pritchard’s ability and character.

King spoke with Thompson. Thompson spoke with Pritchard. King introduced himself to Pritchard. Pelphrey got involved, and Pritchard committed.

When Pritchard gets settled at Cookeville, his only mode of transportation will be a bicycle. Those kids who have $400 headphones and a closet filled with Jordan- or LeBron-branded shoes — they typically also have cars. Pritchard has a driver’s license but hasn’t yet gotten a car.

“I’ll work for it. I’ll have a car someday. I’ll change my circumstances.”

Before Friday, I had spoken only briefly with Pritchard. I was told that I would enjoy his company, and I really did. He’s a pleasant, clever guy with a 3.7 GPA. His text messages are written in complete sentences. Who does that?

Oh, and he’s a heck of a basketball player.

Objectivity doesn’t apply here. I hope Pritchard and his Webster teammates win the 4A gold ball, and I hope he has an amazing experience at Tennessee Tech.

Pritchard and I talked while having pasta in a south Tulsa restaurant. A masked member of the wait staff glanced in our direction and said, “You’re Pritchard, right? I’ve seen you a couple of times. You’re good.”

Pritchard thanked him and went back to work on a plate of chicken alfredo. He seemed pleased that a total stranger was aware of his game, and I was pleased for Pritchard.

By the end of a two-hour talk on Friday, I was as inspired as I was impressed.

The 6-foot-3 guard is among the top scorers in Tulsa Public Schools history.

Webster’s Anthony Pritchard converts on a dunk during a recent game at Memorial. In his quest to lead the Warriors back to the Class 4A state tournament, he averages 23.3 points, 7.1 rebounds and 4.9 assists per game.

Webster's Anthony Pritchard (right) is pictured during a home victory over Memorial. He has signed a national letter of intent to play basketball at Tennessee Tech of the Ohio Valley Conference. 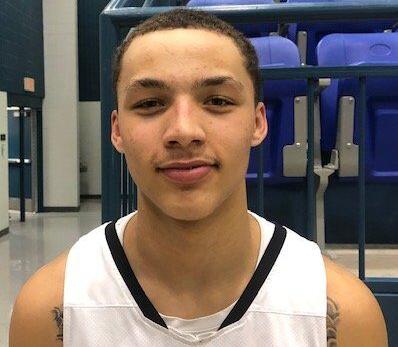