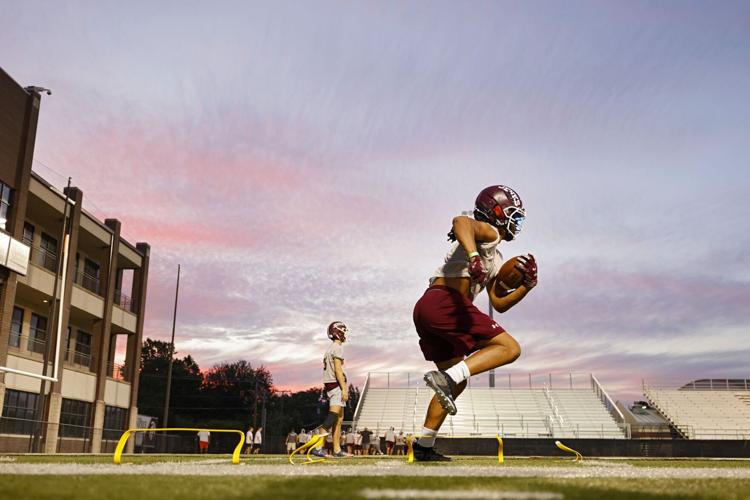 As the sun rises over Allan Trimble Stadium, Jenks running back Jalyn Stanford does an agility drill during the Trojans’ Monday practice. 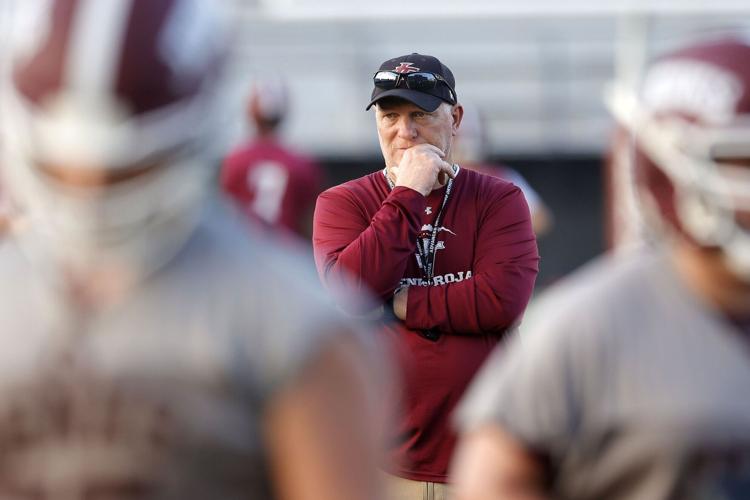 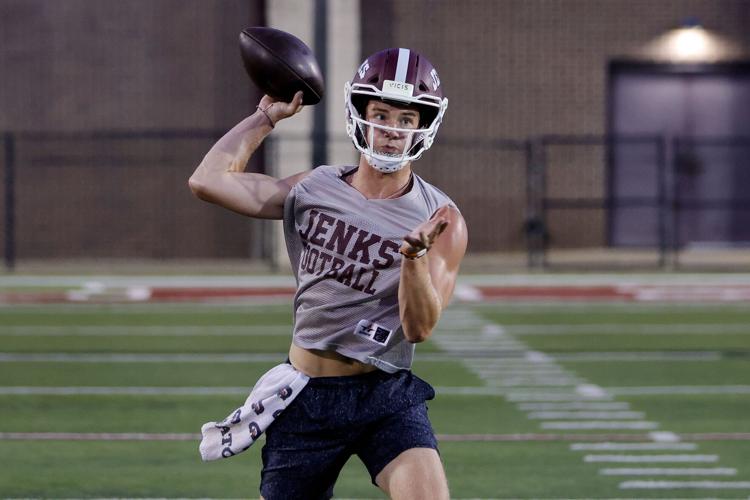 Senior Ike Owens is expected to be the starting quarterback in Jenks' Aug. 26 opener at Edmond Santa Fe. 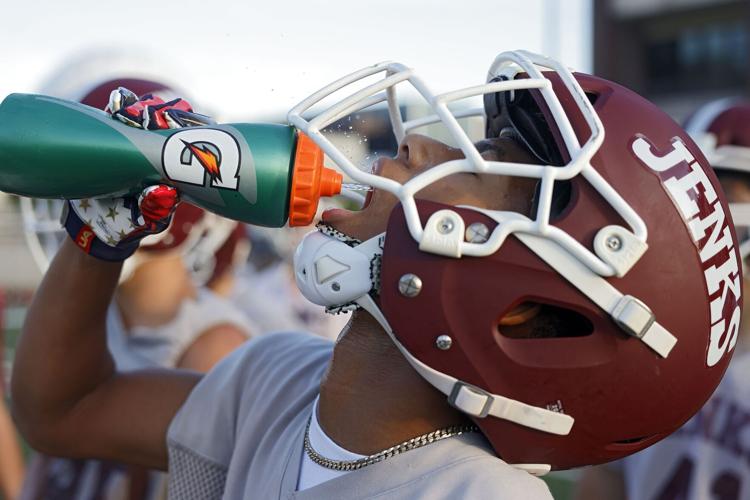 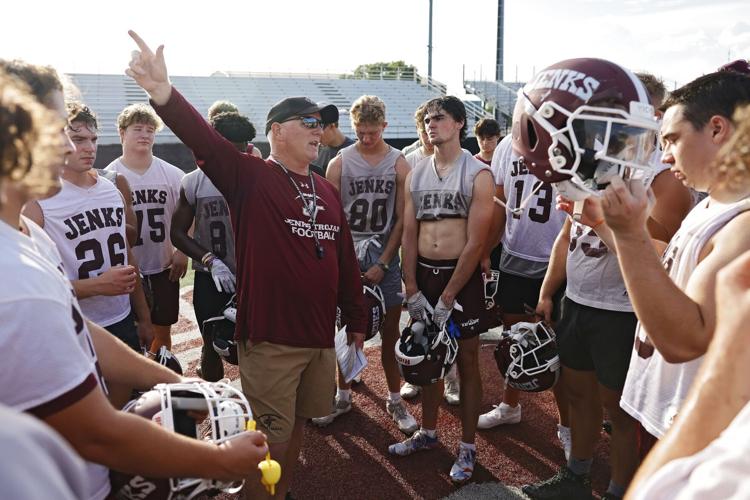 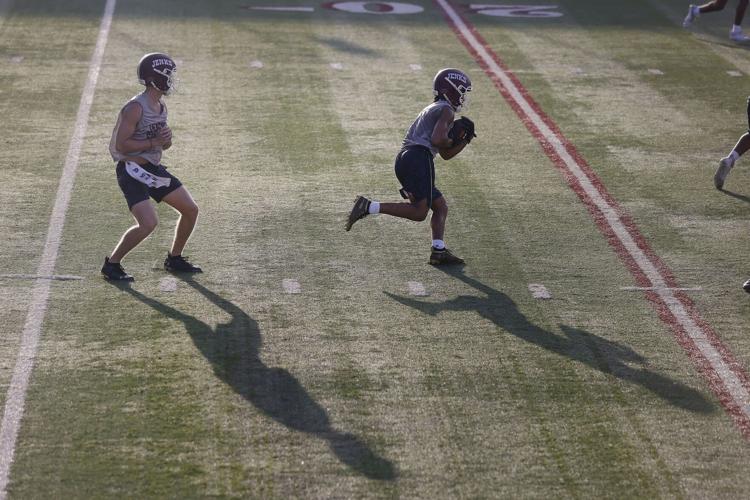 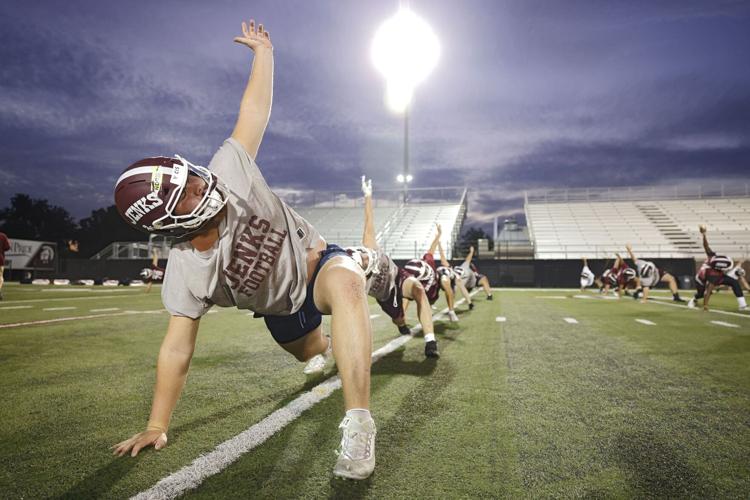 For Landon Zaldivar and his teammates, Jenks' first preseason practice began with a session of stretching. MIKE SIMONS/Tulsa World

JENKS — Most teens aren’t wired for early morning excellence, but Ike Owens was fresh and sharp when the two-time defending Class 6AI champion Jenks Trojans launched the quest for what would be their third consecutive title and the 19th in the history of Oklahoma’s most accomplished program.

After an offseason of news-making quarterback movement at Jenks, Union, Holland Hall, Owasso, Bixby and Bartlesville, the 6-foot-3, 185-pound Owens appears to be QB1 for the Trojans. He certainly looked like a championship-level quarterback on Monday, flaunting impressive arm strength and dropping dimes as Jenks launched its preseason camp with a 6:07 a.m. practice session at Allan Trimble Stadium.

“I’m always excited for it,” Owens said of the first practice. “I didn’t sleep much last night. I’m trying to savor it all up, being a senior. I’m ready to roll.”

“My dad always tells me that people are watching,” Owens said. “Everything I do, I’m going to be judged for it. There’s a big weight on my shoulders. Around this community, I’ve got to be the guy.”

With the start of camp, Keith Riggs begins his fifth season as Allan Trimble’s head-coaching successor. Before Trimble’s retirement after the 2017 season and his December 2019 death (three years after his ALS diagnosis), he had streaks of six consecutive Jenks championships in 1996-2001 and four in a row in 2012-15.

Riggs and the 2022 Trojans are striving for what would be their third consecutive 6AI title. The annual Jenks Trojan Preview scrimmages are scheduled for Aug. 19 and the season begins with an Aug. 26 trip to Edmond Santa Fe. A week later, Jenks hosts Owasso.

On Sept. 9, the Jenks-Union Backyard Bowl is played at Union. It could possibly be a quarterback battle of former teammates Owens and Shaker Reisig. As a Trojan freshman last season, Reisig was 11-0 as the starter. He now is a Union Redhawk.

During the spring, Trojan players and coaches received their 2021 championship rings. Running back Jalyn Stanford says he keeps his 2020 and 2021 rings in a glass case.

It’s a lot easier to respond to a 4:45 a.m. alarm — as Stanford did on Monday — when there’s the potential of a grand prize like a championship ring.

In consideration of a miserably hot Oklahoma summer, Jenks has early practices each day this week. Riggs’ beat-the-heat strategy worked beautifully on Monday. When practice began, there was just a hint of a south breeze and the temperature was a pleasant 79 degrees. By late morning, the Jenks High School campus temperature was 93.

Allan Trimble’s wife Courtney made an appearance on the west sideline. Courtney Trimble always was involved with the Trojan program during Allan’s 1995-2017 run and today is Jenks’ equipment manager.

“I don’t know what we’d do without her,” Riggs said.

The son of former Trojan Richie Calmus and nephew of Jenks legend Rocky Calmus, Jenks junior Jett Calmus is an interior linebacker. Rocky wore No. 20 for the 1997 Trojans — the greatest defense and greatest team in state history — and Jett fittingly has that same number on his back.

Last season, Owens was the starting quarterback for Jenks’ first two games of the season — an overtime victory at Mansfield (Texas) Summit and an eight-point home loss to Bixby.

For the third game — the Backyard Bowl victory at Union — and for the rest of the season, Reisig was the starter. He scored a touchdown during the 6AI championship rematch win over Union.

In May, Reisig was with the Trojans through the entirety of the spring-practice period. One day after the final spring session, Reisig was with the Union Redhawks during a Union team camp. Stunning everyone in the Jenks program, his family had moved to an address in the Union Public Schools district. As a sophomore this season, Reisig is a Redhawk QB.

A highly regarded Los Angeles quarterback prospect — Jackson Presley, son of former Trojan quarterback Brian Presley —arrived at Jenks and played in several 7-on-7 events. Brian planned to relocate his film production company from California to Tulsa, but told the Tulsa World that a tax-incentive bid did not materialize.

Instead of being a ninth-grade member of the 2022 Jenks roster, Jackson Presley now is enrolled at a Los Angeles-area private school. Before he has taken a varsity snap, he has college scholarship offers from Texas A&M, Florida State, Oregon and Arizona.

Through all of that, Owens never budged from his commitment to the Trojan program. He has attended Jenks schools since kindergarten and always aspired to play quarterback at Allan Trimble Stadium.

On Day 1 of preseason practice, Owens looked ready to take the wheel for Jenks’ run at another gold ball.

“I’m super big on faith,” Owens said. “I kept my eyes on the prize, remained on course and worked my tail off. I persevered a lot but I’m glad it’s my time. I’ll take advantage of it.”

A new season kicks off tonight for many Oklahoma high school football teams. See all of our preseason coverage here. #okpreps

As the sun rises over Allan Trimble Stadium, Jenks running back Jalyn Stanford does an agility drill during the Trojans’ Monday practice.

Senior Ike Owens is expected to be the starting quarterback in Jenks' Aug. 26 opener at Edmond Santa Fe.

For Landon Zaldivar and his teammates, Jenks' first preseason practice began with a session of stretching. MIKE SIMONS/Tulsa World