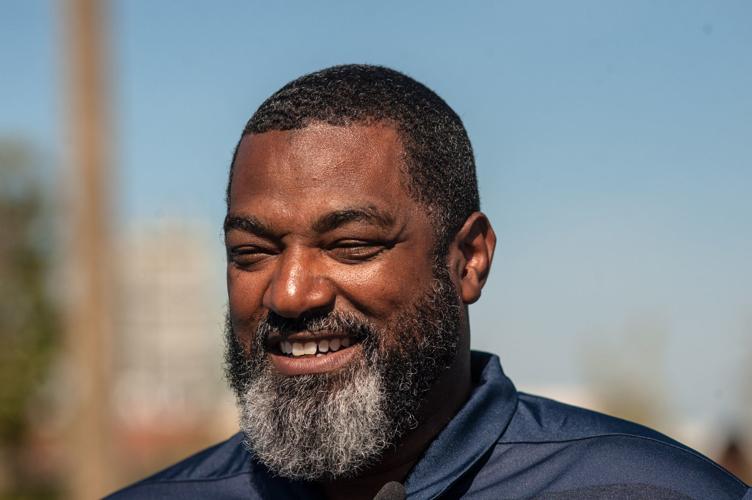 New Cascia Hall boys basketball coach Lee Mayberry has played in the NBA and the Final Four, and also been the Tulsa World’s high school state player of the year while winning a gold ball, but this is his first high school head coaching job. 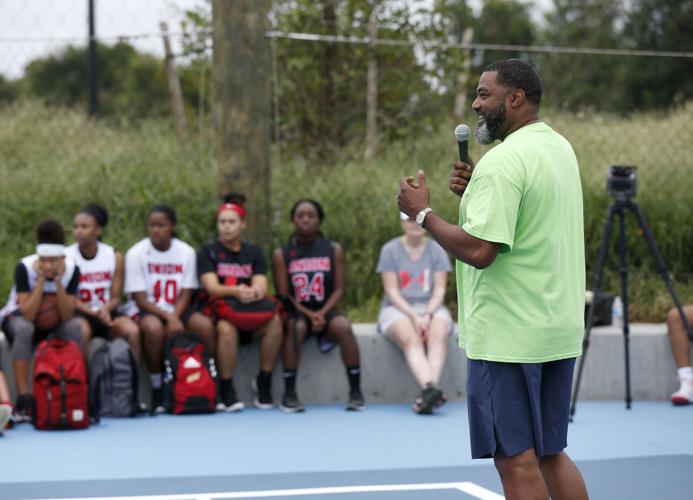 Lee Mayberry gives a chalk talk on the Sports Courts during the opening of the Gathering Place in 2018. STEPHEN PINGRY/Tulsa World

During Lee Mayberry’s basketball career, he has played in the NBA and the Final Four, and also been the Tulsa World’s high school state player of the year while winning a gold ball.

Mayberry, 51, is about to start a new journey in his career.

On Monday, Cascia Hall announced that Mayberry will lead the Commandos’ boys basketball program — his first high school head coaching position. He also will be Cascia’s dean of students.

“This was not just a basketball hire, this was a leadership hire that can positively impact every student on our campus and that was exciting,” Cascia athletic director Dave Reiter said.

Mayberry was an Oral Roberts University women’s basketball assistant the past four seasons until head coach Misti Cussen’s contract was not renewed. He succeeds Danny Hightower, who is retiring after four seasons in that position.

Mayberry’s only previous experience coaching at a high school came during a year with Watson Chapel’s boys team between stints as an assistant on Mike Anderson’s men’s staff at the University of Arkansas and moving to ORU. Watson Chapel is located in Pine Bluff, Arkansas.

“I’m very excited,” Mayberry said. “Watson Chapel was a fun experience. I’m looking forward to the challenge of running my own team. That’s always been in the back of my mind, whether it was high school or college, on the men’s side or women’s side, it’s basketball.”

Mayberry, who has coached AAU teams, was the Tulsa World’s state boys basketball player of the year in 1988 when he helped Rogers win the large-school state title. His head coach that season was Clifford Criddle, who also made the transition from coaching girls basketball.

“He coached my sister, Shannon,” Mayberry said. “He was really good at coaching them both.”

Besides Criddle, Mayberry also played for Lonnie Spencer at Rogers, as well as Nolan Richardson at Arkansas and Mike Dunleavy Sr. with the Milwaukee Bucks.

“For me to get a chance to implement my defensive and offensive philosophies is going to be exciting,” Mayberry said. “I will take a lot of those things I’ve learned and been taught from the coaches I have played for, and try to implement what I want to do — a mix of the best stuff that I think will work for me and what I do. I have been blessed to play for and be around some really good coaches. It’s been great and been fun.”

Mayberry ranks third in University of Arkansas history with 1,940 points, leads in all-time steals with 291 and ranks second with 729 assists. He helped the Razorbacks win four conference titles in four years. Mayberry played in the Final Four in 1990 and Elite Eight in 1991.

After being a Milwaukee Bucks first-round draft choice in 1992, he played seven seasons in the NBA. He didn’t miss a game in his first four seasons, appearing in 328 consecutive games with the Bucks before spending his final three seasons with the Vancouver Grizzlies. He also was a scout for the Golden State Warriors from 2009-14.

“Speaking on the basketball side for me, Lee Mayberry checked every box,” Reiter said. “We wanted someone that will be a great role model and mentor for our teams and school. Secondly, we wanted someone that could help develop our athlete so they can be the best versions of themselves on and off the court.

“Finally, we wanted someone that has that positive workmanlike approach to the game of basketball. Having Lee Mayberry at Cascia Hall makes us better in a lot of area, not just basketball and that makes this such a great day for our community,”

Mayberry inherits a Cascia team that went 6-21 this past season, but was only one win away from reaching the Class 3A area tournament. He has been able to follow high school basketball as his youngest of five daughters, Rhyian, plays for Booker T. Washington. Mayberry’s nephew, BTW senior Aaron Potter, is an All-World player of the year finalist.

Cascia has been in 10 state tournaments, although none since 2012. The Commandos won a state title in 2009 under coach Brian Rahilly.

“Cascia Hall already has a good foundation, a winning tradition,” Mayberry said. “I’m just hoping to build on what Hightower and Rahilly and those before me have done, they have done an exceptional job.”

Taleya Mayberry on Lee Mayberry: 'He does a great job of separating the coach and the dad'

Watch Now: OK Preps Extra podcast: It's the offseason but plenty going on

Tom Brady will become analyst for Fox Sports upon retirement

Tom Brady will become analyst for Fox Sports upon retirement

New Cascia Hall boys basketball coach Lee Mayberry has played in the NBA and the Final Four, and also been the Tulsa World’s high school state player of the year while winning a gold ball, but this is his first high school head coaching job.

Lee Mayberry gives a chalk talk on the Sports Courts during the opening of the Gathering Place in 2018. STEPHEN PINGRY/Tulsa World