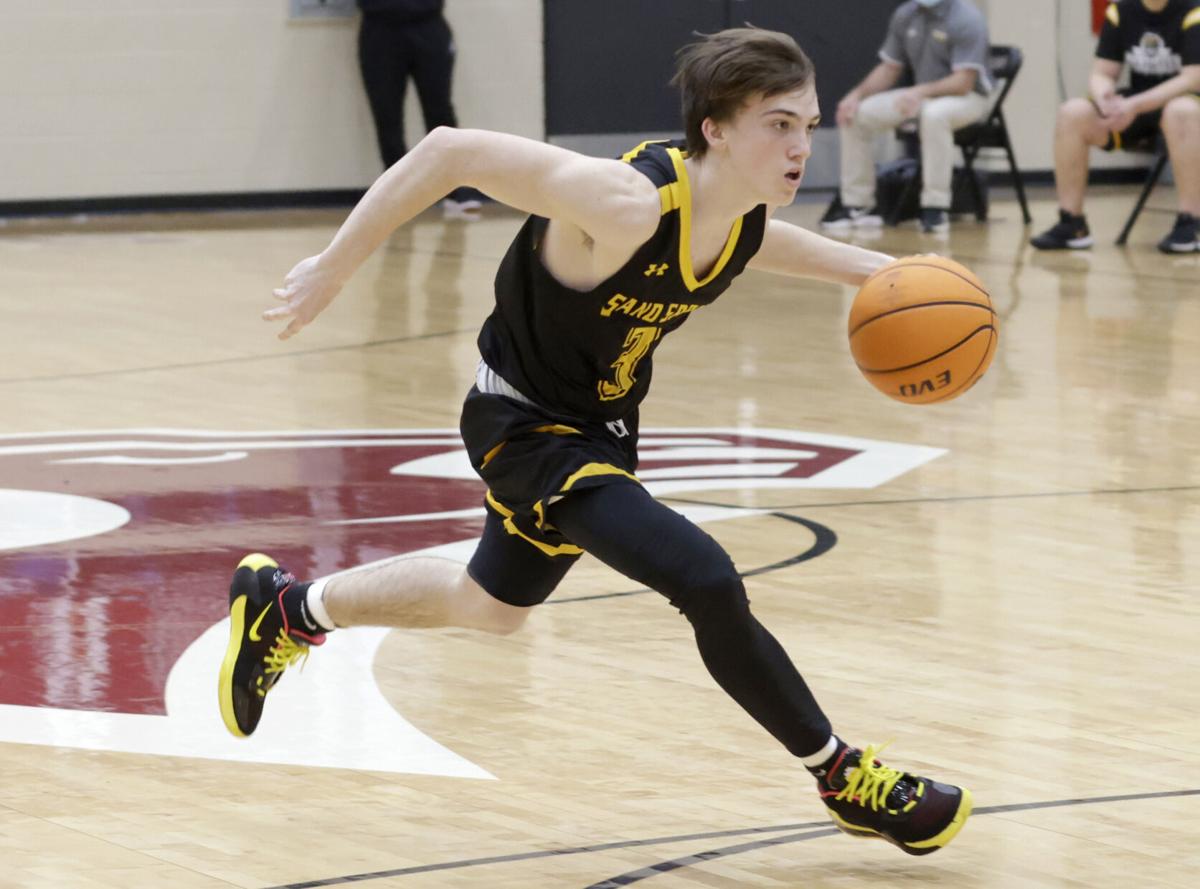 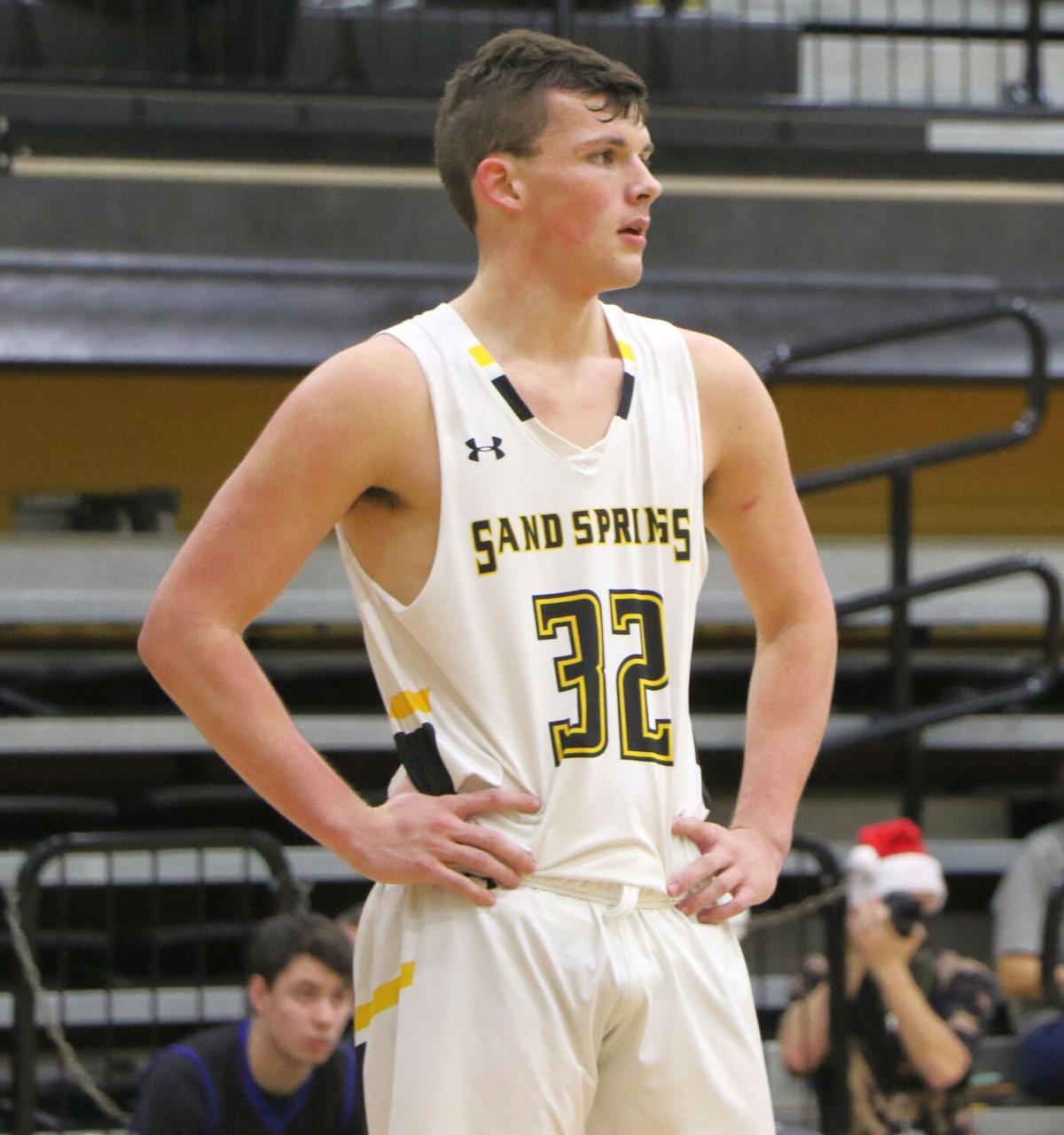 Ethan Oakley had 16 rebounds and 11 points in the season-opening win over NOAH.

Ethan Oakley wasn’t planning on playing basketball his senior year, but two weeks before the season tip-off, he asked his team if they would take him back. The Sandites welcomed his return, and it paid off in the season opener Thursday night.

Oakley double-doubled with 11 points and 16 rebounds from the bench, while Jason Clark scored 19 points in Sand Springs’ 68-57 win over NOAH — the Northeast Oklahoma Association of Homeschools — (1-2) at SpiritLife Church.

“I put it up to the senior players whether they wanted to allow him back or not,” Sandites ninth-year coach Eric Savage said. “I think they know what he can mean to this team. He demonstrated some of that tonight, so we’re glad to have him back, for sure.”

The Sandites had to survive an early upset bid after falling behind 16 points in the first quarter. Clark had four fouls in the first quarter alone and spent half of the game on the bench, while his team of mostly first-year varsity players had to claw their way back into it.

“We’ve got a lot of guys who have been on varsity, but not a lot who have gotten a lot of minutes,” Savage said. “Jason Clark and Ethan Oakley have logged the most minutes the past few years as underclassmen, but the rest of the guys haven’t.

“They’re going to have to learn those roles a little bit. I think they were a little overhyped in the first half but settled in in the second half, started rebounding better and executed better on the offensive end,” he said.

“We finally got Jason Clark going a little bit, and each of those seniors kind of stepped up and made plays there in the second half when we needed them to.”

Down 22-6, sophomore Alijah Roper made a 3-pointer to close out the first quarter and spark a Sandite resurgence.

J.D. Dickson, a senior move-in from Jenks, tied the game up at 27-27 after scoring through a foul from Will Edwards and sinking the free throw, but the Jaguars found their feet again and rolled to a 39-28 halftime lead.

The second half was all Sandites as the visitors outscored their foes 20-10 in the third quarter and 20-8 in the fourth. Clark gave them their first lead with a layup at 44-43, but the Jags led 57-52 early in the fourth.

Then fouls caught up to the home team, which lost Sullivan Wagner, Jack Garner and Connor Hislop. Dickson scored 16 points in his first game as a Sandite before fouling out, but the Sandites had the deeper bench and closed the game on a 19-point run.

Cale Askew also had a big night for Sand Springs, with 10 points and eight rebounds.

This year’s Sandites will look a bit different from the star-studded teams of the past. After graduating four of last year’s starting five, the team will turn to a much younger bench.

“I think it’s going to be a collective effort,” Savage said. “I think this year’s team is a little bit different. We’re not going to just be able to rely on one guy and hope that he can carry us through, so we’re going to have to definitely play together and rely on each other.

“I think Kooper Kelly, a freshman, is going to get better and better as the year goes. That was a huge 3 he hit there late in the fourth quarter after struggling. He’s got the ability; he just had first-game varsity jitters, I think. He’ll grow up as the season goes, but we’re definitely expecting big things from him.

“We’re going to have to develop a little depth off the bench. Kade Holland, we’re looking for him to be able to come in as well as Blake Johnson to come in and provide some significant minutes for us.”

This season will be a unique one for Savage for another reason, in addition to the lack of star power. It’ll also be the first time since 2014 that he hasn’t had one of his sons on the team.

Colt Savage was a four-year starter in 2014-18 and ranks as the No. 2 all-time leading scorer at Sand Springs.

Cale Savage and Cason Savage were also multiyear starters and leading contributors to the school’s deep playoff success the past eight years.

“It’s a different feel for sure,” Savage said. “I definitely miss having them out there. They were kind of the second coach on the floor when I had one of them in the game. They knew what I wanted and knew what I expected, so somebody else is going to have to take on those roles.”

Sand Springs will need a new star or two to rise up in order to keep alive one of the longest eras of success in school history.

The Sandites have made it to the area playoffs seven of the past eight years, including two regional championships from 2019 to 2020.

“It’s going to be a tough year,” Savage said. “We’re going to be hopefully competitive in every game, but the (Frontier Valley) conference is really good.

“I think every team in the conference has at least one college player, if not more, that’s been offered or already committed.

“We don’t have that type of player this year, so for us to be able to compete with that, we don’t have much room for error. We’re going to have to be very disciplined and rely on each other.”

Sand Springs will return to action Dec. 3 in a home rematch against NOAH.

OSSAA: Board may decide Wednesday on site of 6A-5A state tournaments

The OSSAA has bids from Oral Roberts University, the University of Oklahoma and Oklahoma State. Action was tabled last month to determine if all three venues have comparable electronic ticketing processes.

Ethan Oakley had 16 rebounds and 11 points in the season-opening win over NOAH.