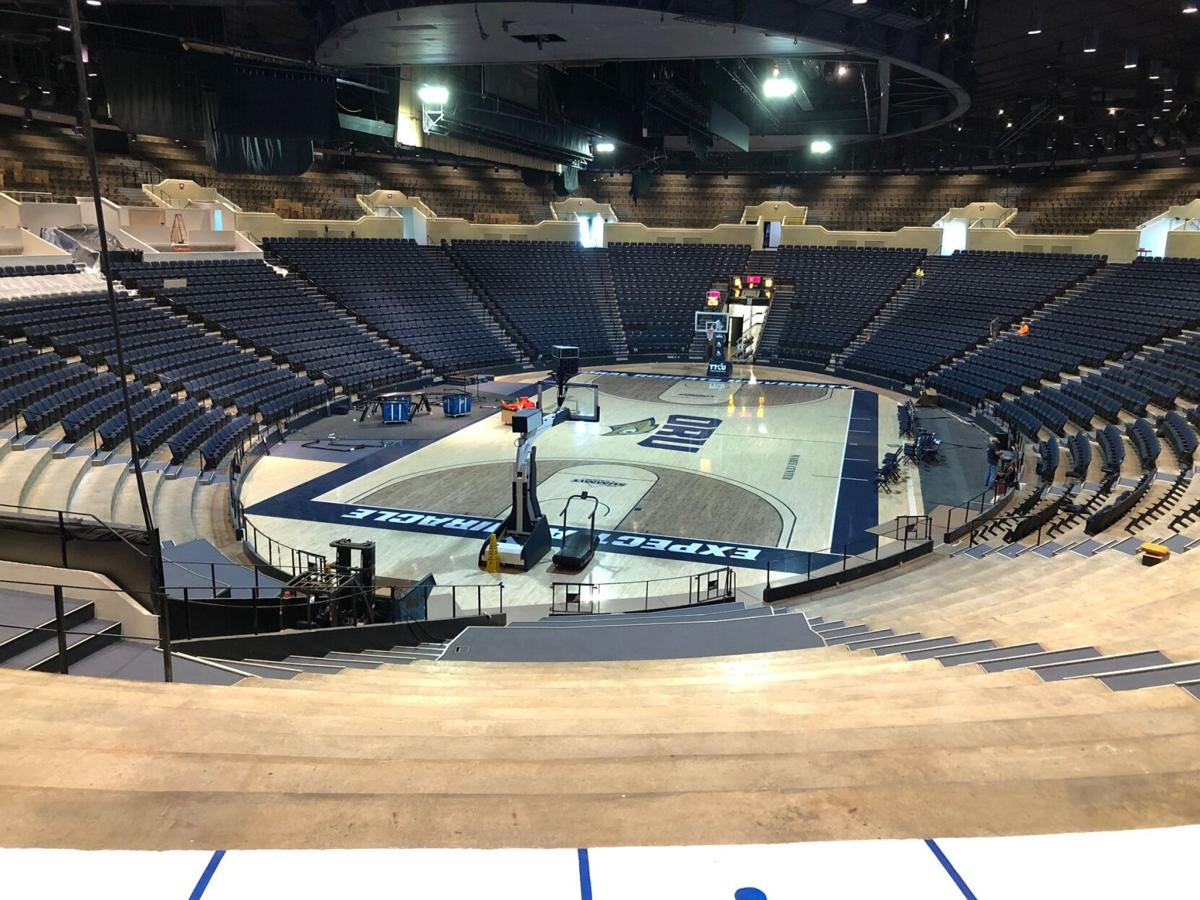 Oral Roberts University is nearing completion of a $5.2 million renovation of the Mabee Center. Every seat in the arena will be replaced by a wider and more comfortable seat. 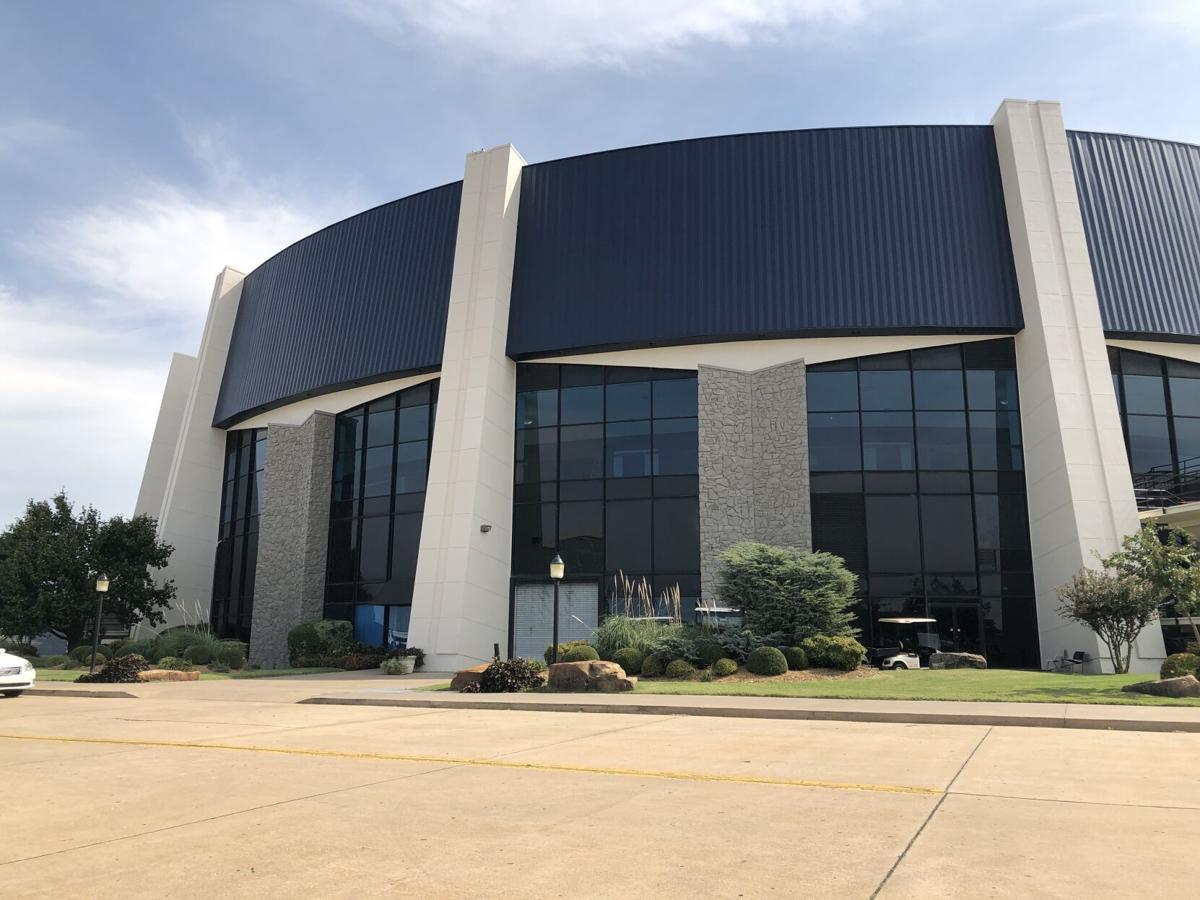 For nearly 50 years, the Mabee Center's primary exterior color was gold. Now, the primary color is navy and all of the new glass is blue. 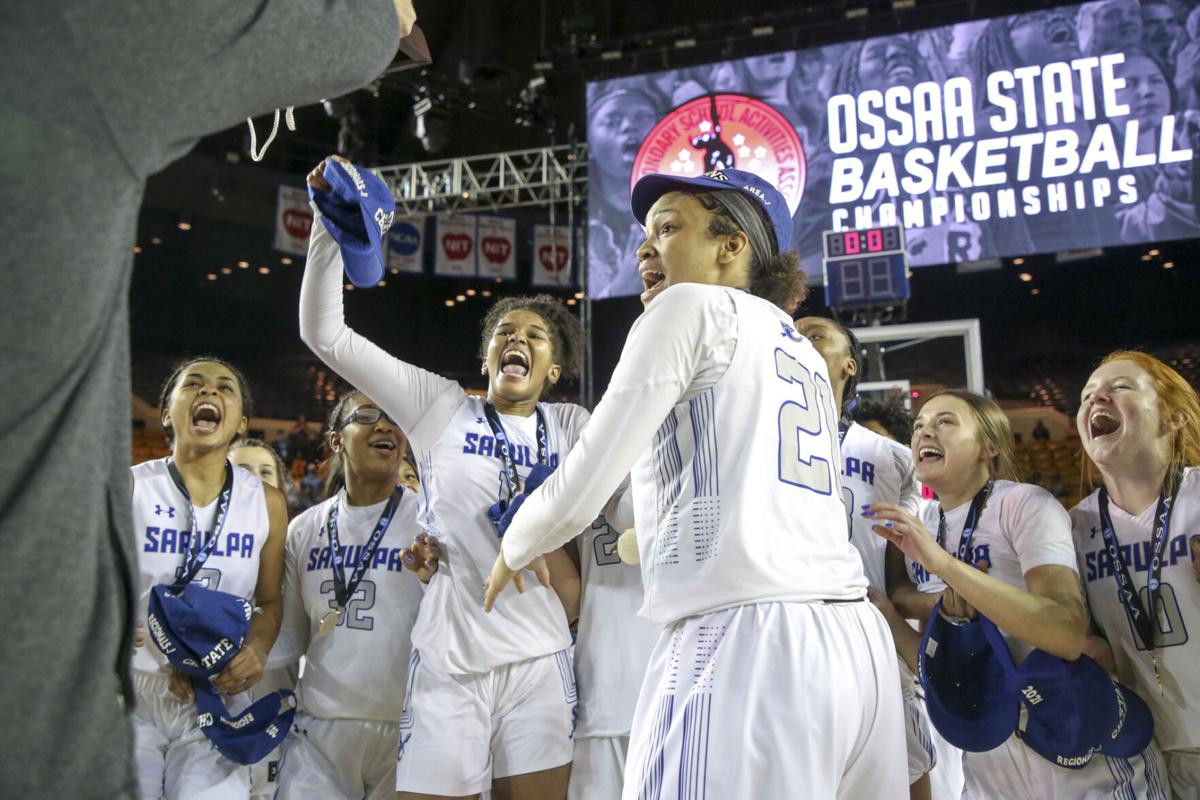 Sapulpa basketball players celebrate after capturing the 2021 Class 5A title at the Mabee Center. 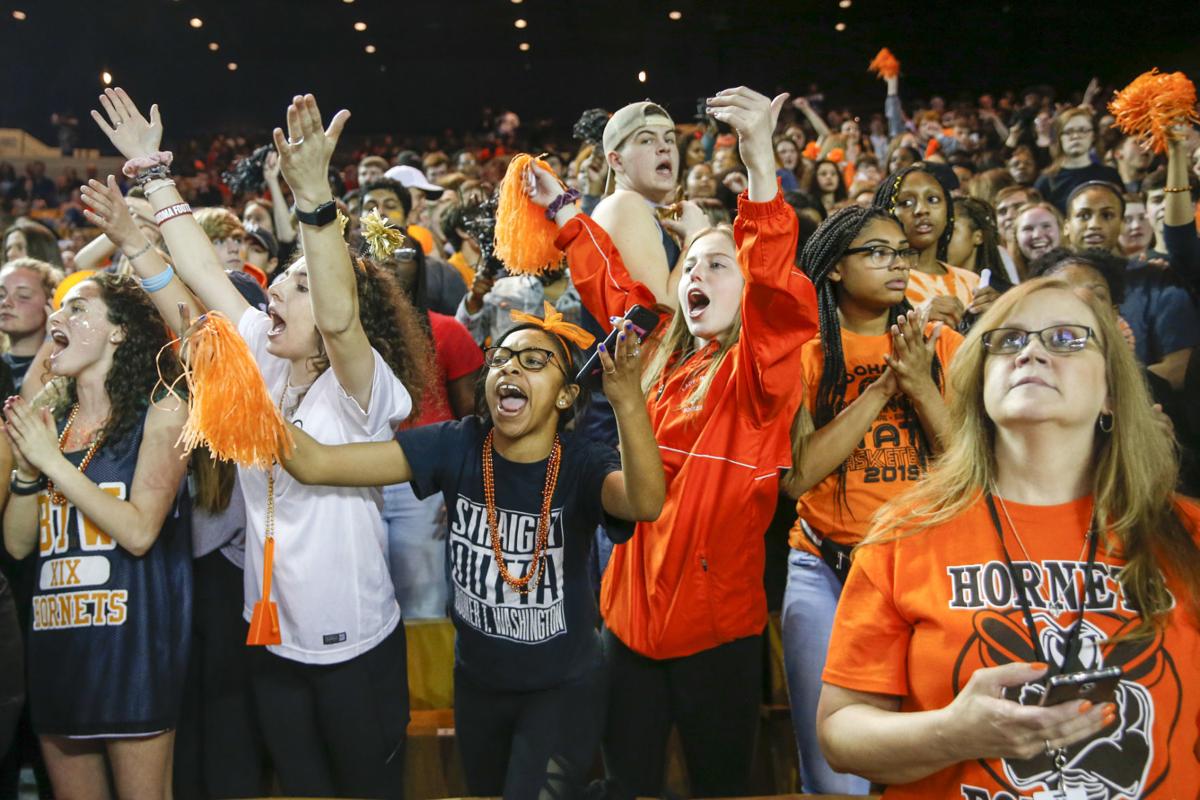 Booker T. Washington students react as the Hornet basketball team captures the 2019 Class 6A title at the Mabee Center.

For the sake of geographic balance and because both venues are ideal, all Oklahoma high school football title games should be played for years to come at the University of Central Oklahoma in Edmond, while Class 6A and 5A state basketball tournaments should remain at Oral Roberts University’s Mabee Center.

It’s a perfect situation for each sport, and especially now that the Mabee Center is better than ever before.

Last week, the Tulsa World’s Mike Brown reported that the Oklahoma Secondary School Activities Association soon will determine the site of the 2022, 2023 and 2024 Class 6A and 5A girls and boys basketball state tournaments. ORU, OU and Oklahoma State submitted hosting bids.

“I have put in what I feel is an incredibly competitive bid,” said Tony Winters, the Mabee Center general manager. “We’ve won the last four bids, and I’ve hardly increased (the OSSAA’s fee).

“We don’t make that much money on it, but it’s always been such a great thing not only for ORU and basketball fans, but for the city of Tulsa and the economy.”

Oral Roberts University’s 2021 will be remembered for the Golden Eagles’ run to the NCAA Tournament’s Sweet Sixteen and for a $5.2 million Mabee Center renovation that began only a few months ago. By Nov. 1, most aspects of the interior-and-exterior project will have been completed.

The Mabee Center has a new sound system. Each of the 700 house lights has been replaced. There is new carpeting in the aisles. There are three new suites and state-of-the-art wireless service for patrons.

On the building’s exterior, the primary color had been the original gold of 1972. Now, it’s navy, and all of the new glass is blue.

I was stunned to learn from Winters that the Mabee Center’s gold lower-bowl seats were the arena’s original seats. All seats in the lower bowl and upper level have been replaced by new ones that are navy in color and “the most comfortable (arena) seats in Oklahoma,” Winters reports.

The width of the old seats ranged from 19 to 22 inches. The new seats range from 22 to 24 inches. For many years, the official seating capacity had been 10,575. Now, because of the wider seats, there is a reduction of about 1,000.

“I’m biased, of course, but I think it’s an incredible arena — a great place for a concert or a basketball game,” said Winters, who attended ORU in 1991-94 and after graduation became a Mabee Center event coordinator. There were promotions in 2002 (to building manager) and 2010 (to general manager).

“The sight lines are great,” Winters continued. “We spent top dollar on the new seats. Those old gold seats — the fact that we made them last for 50 years is a miracle.”

The game floor will be refinished before the start of ORU’s basketball season, which for the men’s program includes home dates with Oklahoma State (Nov. 26) and the University of Tulsa (Nov. 29).

Two years ago, the Mabee Center was outfitted with a spectacular video board that is suspended above the court. As for parking, there’s no better situation anywhere than what ORU has at the Mabee Center.

Soon, there will be the construction of the Mike Carter Athletic Center — a practice facility of more than 40,000 square feet, connected to the Mabee Center.

I wrote this in January 2019 – six weeks after the conclusion of the Oklahoma high school football season: “To some extent, why can’t Oklahoma replicate the Texas model? Each of 12 Texas football title games was played at AT&T Stadium, the home of the Dallas Cowboys.

“On Nov. 30, six Oklahoma title games were played at six different locations. Each game had a 7 p.m. kickoff time. It was impossible for any fan to have attended multiple games. A week later, there were three additional championship games — one in Owasso, one in Oklahoma City and one in Stillwater.”

“Texas championship games are a celebration of high school football,” Union coach Kirk Fridrich said at the time. “It’s not the same here.”

If a title game is played at OU, Oklahoma State or the University of Tulsa, a crowd of 8,500 feels disappointing. At 10,000-seat Wantland Stadium, 8,500 fans can generate the type of atmosphere that the athletes deserve.

I’m told that a majority of the state’s 6A-5A athletes, coaches and administrators — including those from the Oklahoma City area — love the Mabee Center as a championship venue for basketball, and now the Mabee Center has been modernized in a rapid and really impressive manner.

Unless OSU or OU has submitted a shockingly lucrative bid that is far beyond the others, I can’t fathom why the association would move 6A-5A basketball away from Tulsa — and especially if football championship games wind up with a long-term home in Edmond.

Week 1 softball Athlete of the Week: Kammie Smith, Kiefer 2B

Claremore to induct 13 into Athletic Hall of Fame

Ceremony is scheduled during halftime of the Zebras’ home football game against Sapulpa on Oct. 29.

The defending Class 4A girls basketball champs drove from their home in Grady County (west of Norman) on Wednesday.

The high school basketball tournament is scheduled Dec. 27-29 at the BOK Center. Last year's event was canceled due to COVID protocols.

OSSAA tables action on state tournament basketball site; ORU, OSU and OU have each made bids to host

Oral Roberts has hosted the 6A-5A tournaments in the Mabee Center continuously since 2010.

Claremore to induct 13 into Athletic Hall of Fame (copy)

The ceremony is scheduled during halftime of the Zebras’ home football game against Sapulpa on Oct. 29.

Oral Roberts University is nearing completion of a $5.2 million renovation of the Mabee Center. Every seat in the arena will be replaced by a wider and more comfortable seat.

For nearly 50 years, the Mabee Center's primary exterior color was gold. Now, the primary color is navy and all of the new glass is blue.

Sapulpa basketball players celebrate after capturing the 2021 Class 5A title at the Mabee Center.

Booker T. Washington students react as the Hornet basketball team captures the 2019 Class 6A title at the Mabee Center.