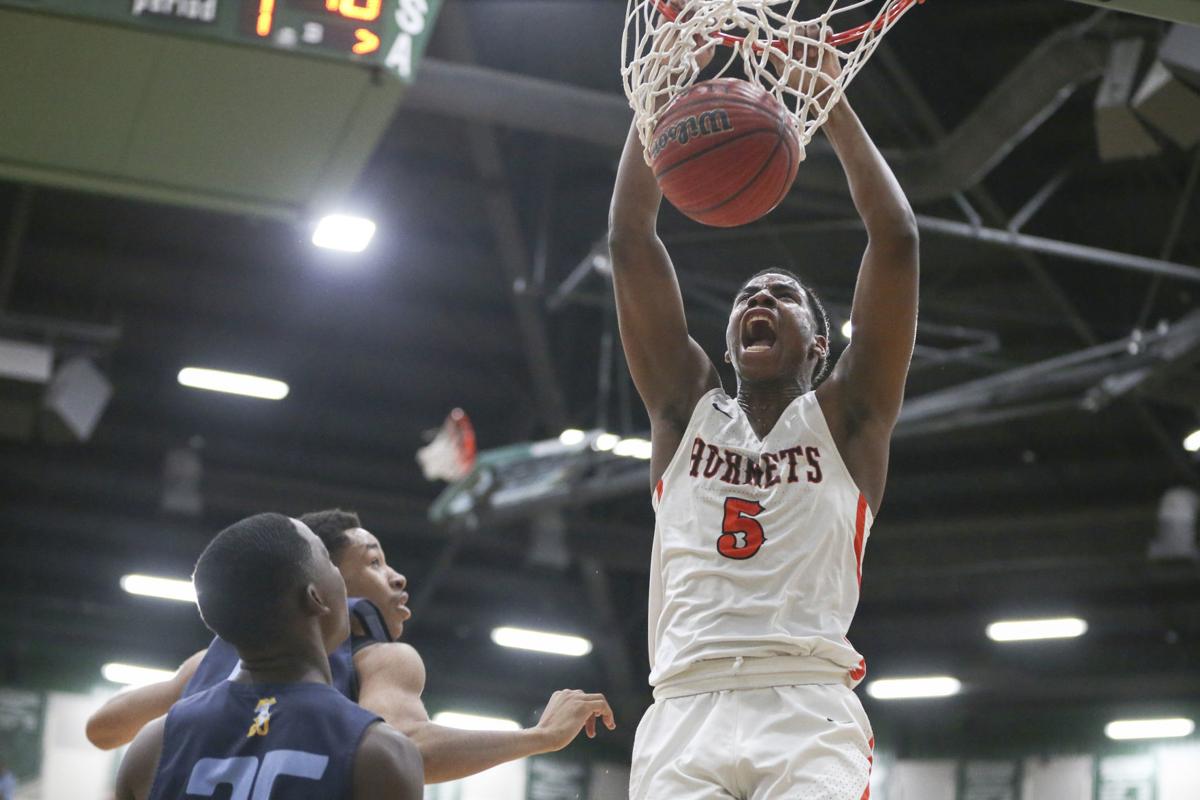 Booker T. Washington’s Seth Hurd yells while dunking over Putnam City West’s Atrocious Washington and Elijah James during the Hornets’ win in the opening round of the Class 6A state tournament Thursday at Catoosa High School. Hurd finished with 22 points and 11 rebounds. IAN MAULE/Tulsa World 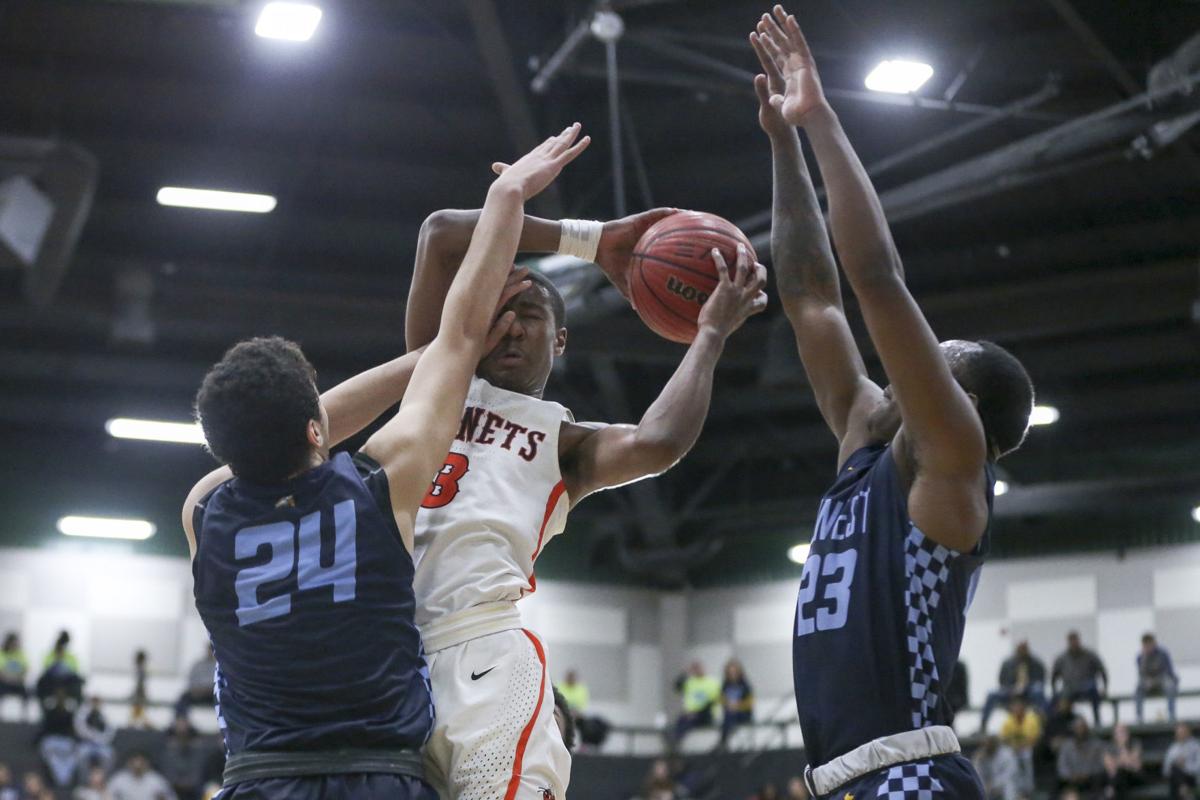 Booker T. Washington’s Bryce Thompson goes up for a shot between Putnam City West’s Donovan Green and Jaylen Rainey during the Hornets’ win in the first round of the Class 6A state tournament Thursday. IAN MAULE/Tulsa World

CATOOSA — For Seth Hurd and his Booker T. Washington teammates, Thursday’s dramatic comeback in the Class 6A state tournament quarterfinal played out very much like theirs’ did last year.

Hurd had 22 points and 11 rebounds while Bryce Thompson also scored 22 to help the second-ranked Hornets rally past No. 7 Putnam West 64-58 at the Catoosa Indians Activity Center.

“It was a battle of wills,” Washington coach Conley Phipps II said.

Washington (24-2), a state runner-up the previous two years, advances to meet No. 11 Southmoore (20-8) in the semifinals at noon Friday at Mabee Center. The Hornets will be the only Tulsa-area team in the 6A boys semifinals as No. 4 Sapulpa lost 61-50 to top-ranked Edmond Memorial.

Last year, Hurd had 24 points and 11 rebounds in an overtime win over Midwest City Carl Albert in the 5A quarterfinals. In both quarterfinals, the Hornets trailed for most of regulation before coming back to win. In both games, Hurd kept making a big impact despite picking up his fourth foul in the third quarter. Thompson also had a big effort in last year’s quarterfinals with 26 points.

Hurd had flashbacks to last year and also to the 2017 6A quarterfinals when the Hornets edged Westmoore 56-51.

“I had to play smart, all three years of experiences helped,” said Hurd, playing in his fourth state tournament.

On a day when the Hornets’ usually reliable outside shooting only produced three treys, the 6-6 Hurd, who averages 15 points and 7.8 rebounds, was a consistent force inside as he has been all season.

“Seth is having a phenomenal year — playing, leading, competing — every game and practice doing all those things big-time players do,” Phipps said.

Hurd’s basket on a follow shot with 1:10 left gave the Hornets a 57-56 lead after they had trailed 52-47 midway through the fourth quarter.

“We knew we had to just keep playing,” said Hurd, who had the tying basket with 28 seconds left in regulation that sent last year’s quarterfinal into OT. “We knew we had an advantage inside.”

Trey Phipps, who averages 17.9 points, was shut out until making 6-of-6 free throws in the final 20 seconds. He also had a key steal in the final minute and had six assists in the game.

The Patriots (20-8) had a 34-26 lead early in the third quarter before Thompson sparked the Hornets, scoring 11 in the period to cut their deficit to 43-42. Hurd’s three-point play tied the game at 47 with 5:31 left before the Patriots reeled off five consecutive points. Thompson’s driving basket started the comeback from that deficit.

“Putnam City West is a great team, I thought they really played well,” Conley Phipps II said. “We were fortunate to win, give a lot of credit to PC West for playing real well. We made some big plays down the stretch.

”They did a real good job of defending Bryce and Trey. When we got it into Seth he did a great job. We didn’t always do a great job getting it to him, but a lot had to do with PC West and the effort they were playing with.”

JV Seat scored 20 points, including eight in the fourth quarter, and Drew Tennial added 15 to lead the Bulldogs (26-2) past the Chieftains (21-5), playing before a capacity crowd of 2,200 in their first state tournament since 1999.

Julian Smith paced Sapulpa with 17 points, including four second-half 3s, and Camryn Dennis had 12 points before fouling out with 2:16 left.

“I’m proud of our guys, they left it all out on the floor,” Sapulpa coach Rickey Bruner said. “It’s not the ending we wanted but this year has been a huge step for our program. These guys made history and we plan on being back.”

Jordan Thompson scored 23 while Sam Godwin had 20 points and 13 rebounds to lead the 11th-ranked SaberCats, who dominated from the start.

Micah Thomas, last year’s state tournament MVP, had 34 points to lead the defending champion Panthers (15-13) past the No. 8 Bombers (20-7). Jeff Nwankwo added 16 points for No. 16 Putnam North, which will face Edmond Memorial in the semifinals at 9 p.m. Friday. JD Ray led Midwest City with 17 points.

Booker T. Washington’s Seth Hurd yells while dunking over Putnam City West’s Atrocious Washington and Elijah James during the Hornets’ win in the opening round of the Class 6A state tournament Thursday at Catoosa High School. Hurd finished with 22 points and 11 rebounds. IAN MAULE/Tulsa World

Booker T. Washington’s Bryce Thompson goes up for a shot between Putnam City West’s Donovan Green and Jaylen Rainey during the Hornets’ win in the first round of the Class 6A state tournament Thursday. IAN MAULE/Tulsa World