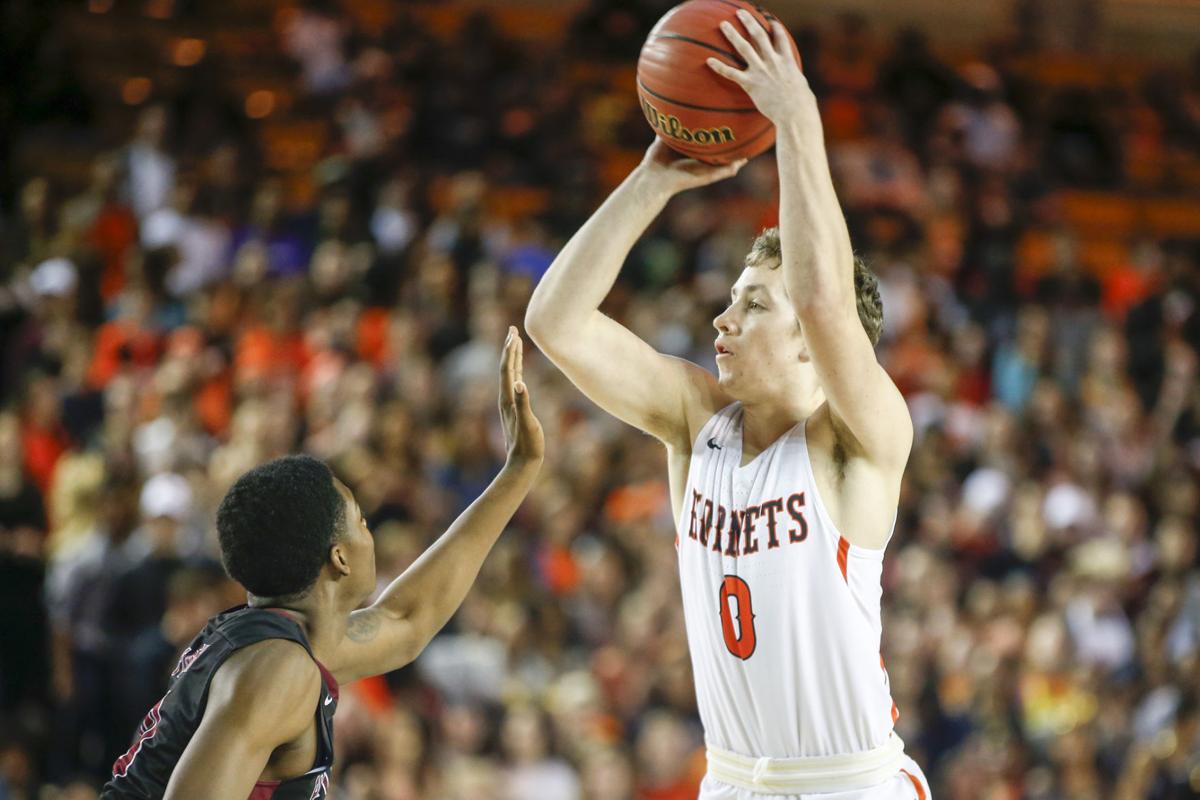 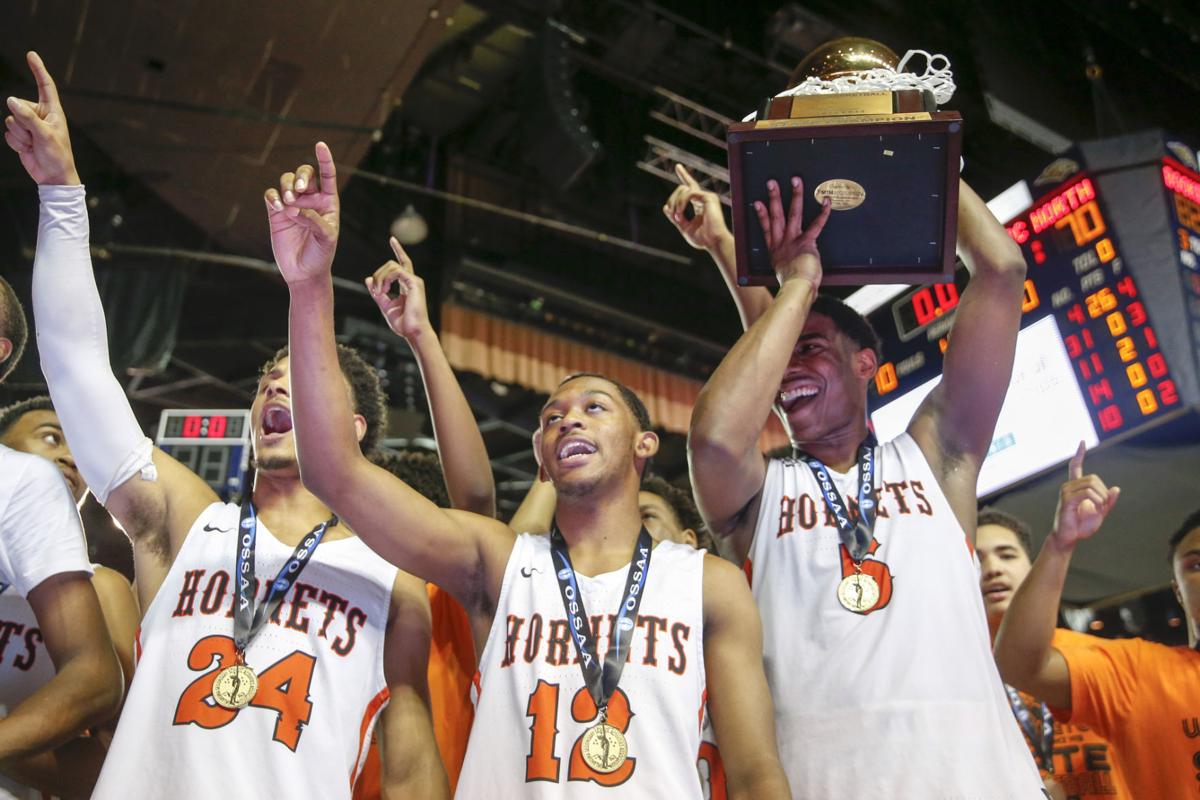 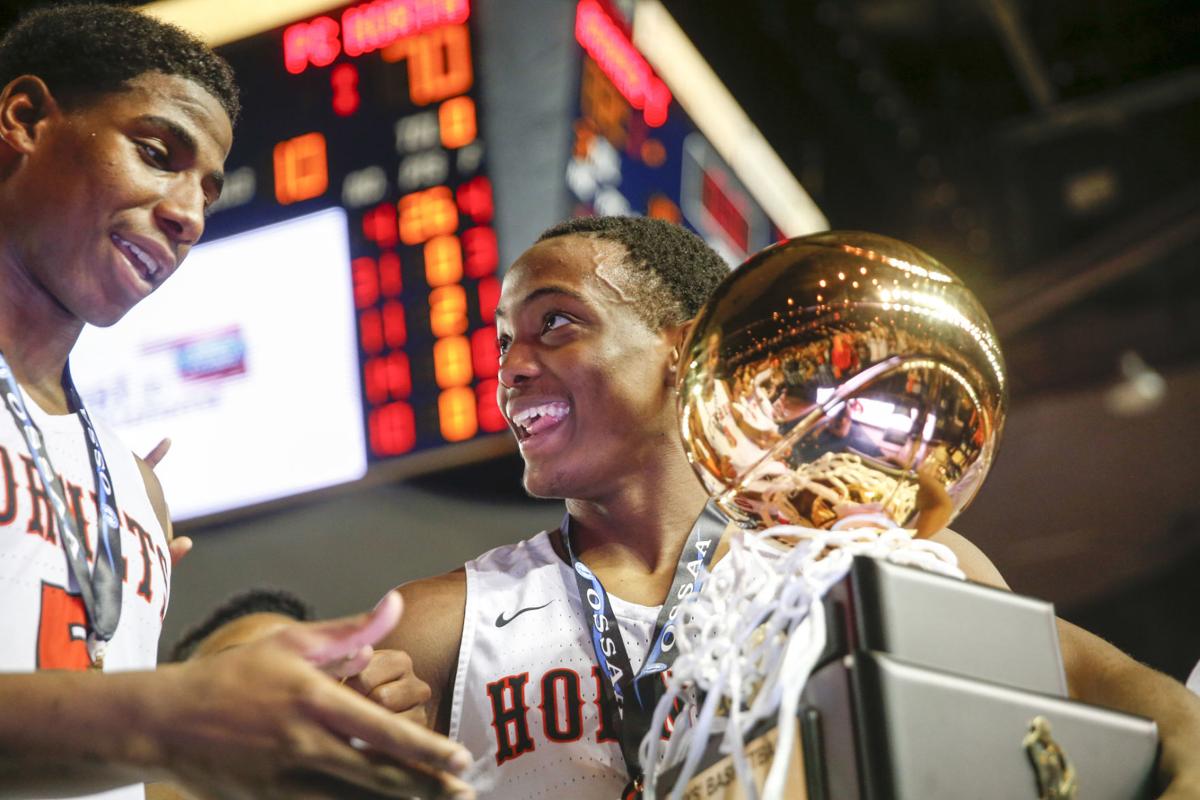 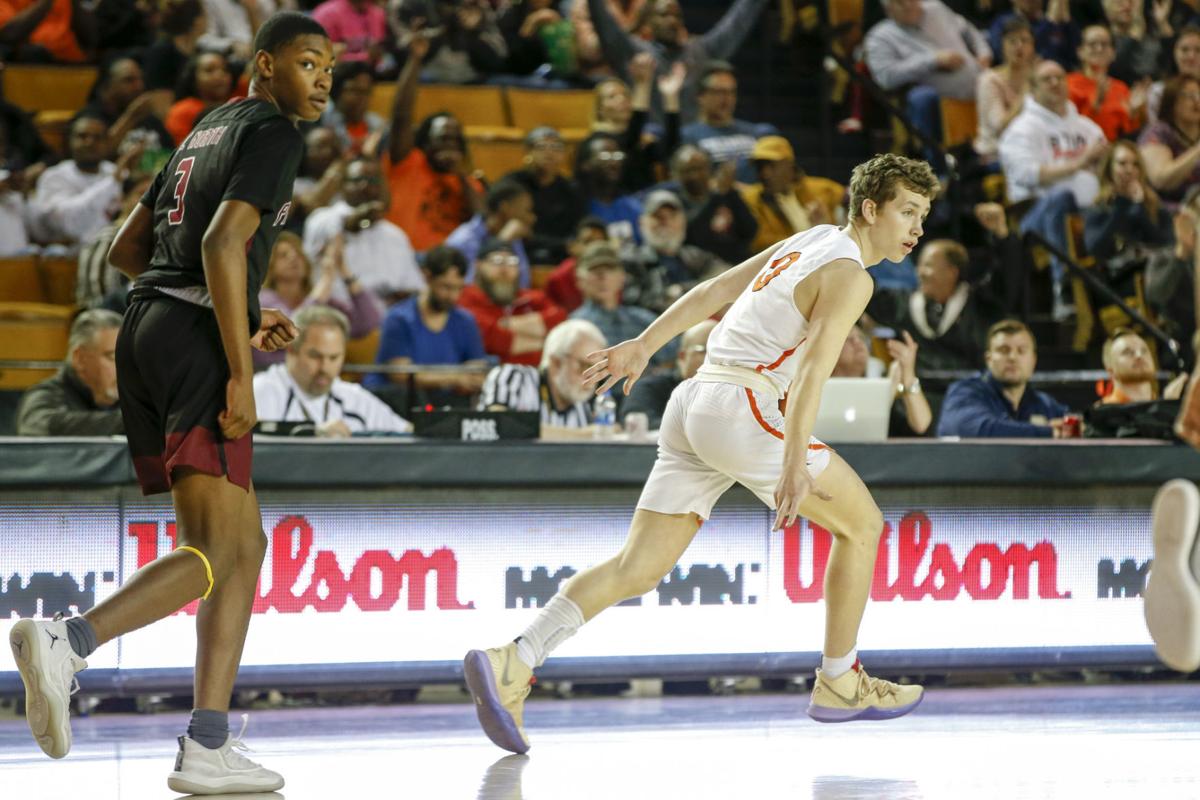 It was fitting Trey Phipps was the first Booker T. Washington player introduced as a state champion Saturday night.

Phipps scored 20 of his career-high 42 points in the fourth quarter to lead the Hornets past defending champion Putnam North 82-70 in the Class 6A boys basketball state title game before an estimated 5,000 fans at the Mabee Center.

“It was fun to watch,” Phipps’ father and Hornets coach Conley Phipps II said. "He works very hard. I knew he was going to have a big game at some point this year. ... I didn’t think it was necessarily going to be tonight and necessarily for 42. I'm proud of him. He earned the right to play that well by all the stuff he does to work on his game. It would have been fun to watch if anyone did it."

Seth Hurd added 22 points and 11 rebounds for the second-ranked Hornets (26-2), who won a state-record 16th boys state title, breaking a tie they had shared with OKC Millwood, which lost an hour later in the 3A state final 60-30 to Kingston in Oklahoma City.

It was the Hornets’ first state title since 2011. They had lost in a state title game the previous two years.

Trey Phipps said after Friday’s dramatic semifinal win that the lessons learned from last year’s 5A state final loss to Memorial would be helpful.

“Last year did not feel good,” he said. “I knew if we were going to win we had to be the aggressor.”

Washington led only 51-48 before Phipps opened the fourth quarter with a trey, and the Hornets were on their way to breaking the game open as Hurd followed with  two free throws and a layup, and Phipps made two free throws to complete an 11-0 run that made it 60-48.

Putnam North’s last hopes were extinguished with 3:51 left after Phipps followed up his own missed free throw with a layup as the Panthers were caught asleep. A few seconds later, Phipps fired in a 3 to stretch the Hornets’ lead to 65-52.

But Phipps and his teammates weren't ready to relax yet.

"I was thinking the whole time up by 12 we've got to keep the pedal to the metal because of what we had done that the last two days coming from behind and winning," said Phipps, a 6-2 junior guard who entered the tournament averaging 17.9 points and is committed to the University of Tulsa.

The Hornets, after a 15-3 run, held their biggest lead at 75-55 with 1:46 remaining and soon were celebrating the historic state title after falling one win short the previous two years.

"This feels amazing," said Hornets junior guard Bryce Thompson, who had 12 points and eight assists. "I couldn't hold back the tears. The last two years, I was going home crying and had nightmares."

“My teammates were awesome, they kept finding me,” Trey Phipps said. “I just needed to do what I needed to, it was just to win. Winning is all that matters. We didn’t care who scored what, it was all about winning.”

Added Thompson,  "He just took over. We wanted to keep getting it to him."

Trey Phipps set the tone for a high-voltage first half with a 3-pointer after only 13 seconds had elapsed.

The Panthers led 19-12 late in the first quarter, but the Hornets moved ahead 29-28 on a Hurd layup off a long pass from Phipps.

The Hornets led at halftime 38-36 on Hurd’s two tiebreaking free throws with 26 seconds left. Phipps had 16 and Hurd 14 points in the first half. Thomas scored 14.

Washington threatened to break the game open in the third after Phipps opened the period with a pair of 3s. The Hornets’ lead grew to 49-39 before the Panthers answered with a 9-0 run -- ended by a Hurd basket -- to tighten the game going into the fourth quarter. But Washington soon regained command and would not be denied its first 6A state title since 1996 - the six since then had been in 5A.

"I'm honored and I know my guys are honored to be a part of that history because I think until you are on a championship team and have a ring you can be a big-time player at Booker T., but you’re not on hallowed ground," Conley Phipps II said.

The Hornets beat Putnam North two other times this season, 82-73 in the Jenks/Union Invitational semifinals on Jan. 25 and 77-70 in the regional final at Washington on Feb. 23. The teams also met for the state title in 1987 at Mabee Center -- Washington won 62-53 for its fourth consecutive gold ball.

Hornets players when they received their gold medals after winning the title were introduced in the order of their uniform numbers and Phipps went first because he wears No. 0.

Trey Phipps said about winning a title with his father, "It’s special, we had a special moment after the game, we were both busting out in tears, it was fun."