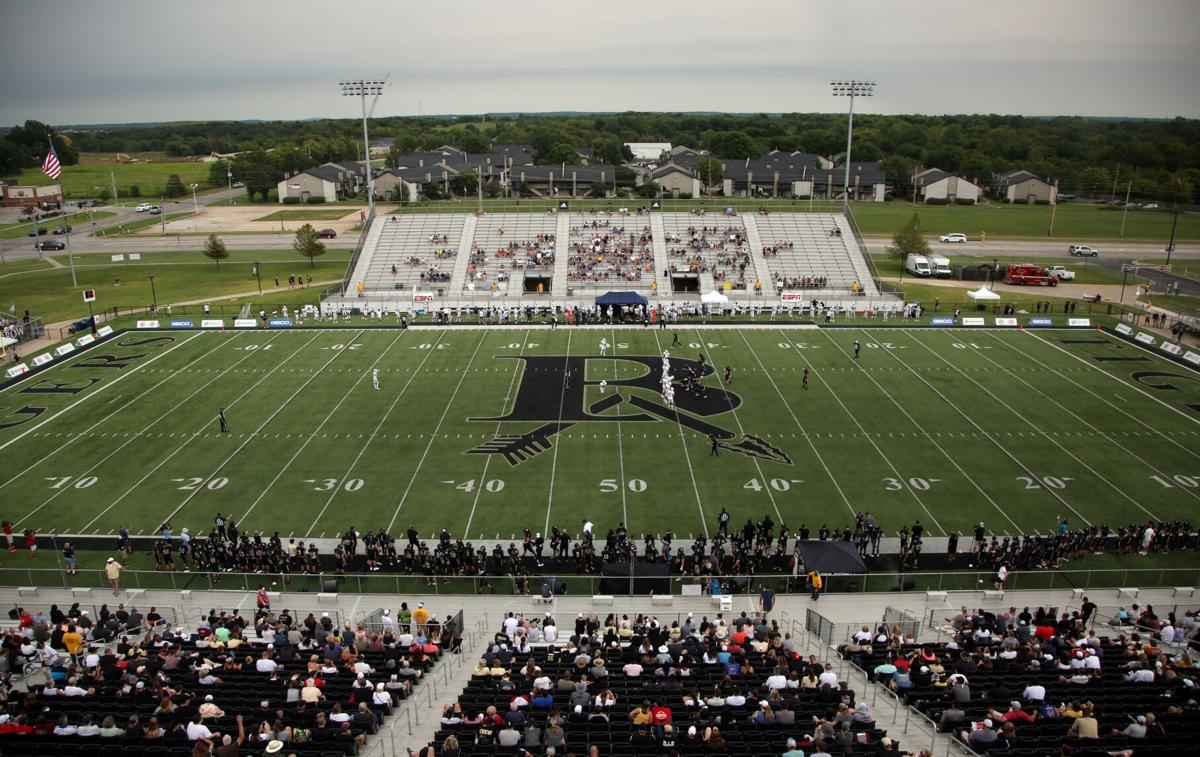 Broken Arrow opened its 2020 season last Saturday at home against Bentonville (Ark.) West. Area administrators said they were satisfied with the way fans adhered to safety protocols in Week 0. 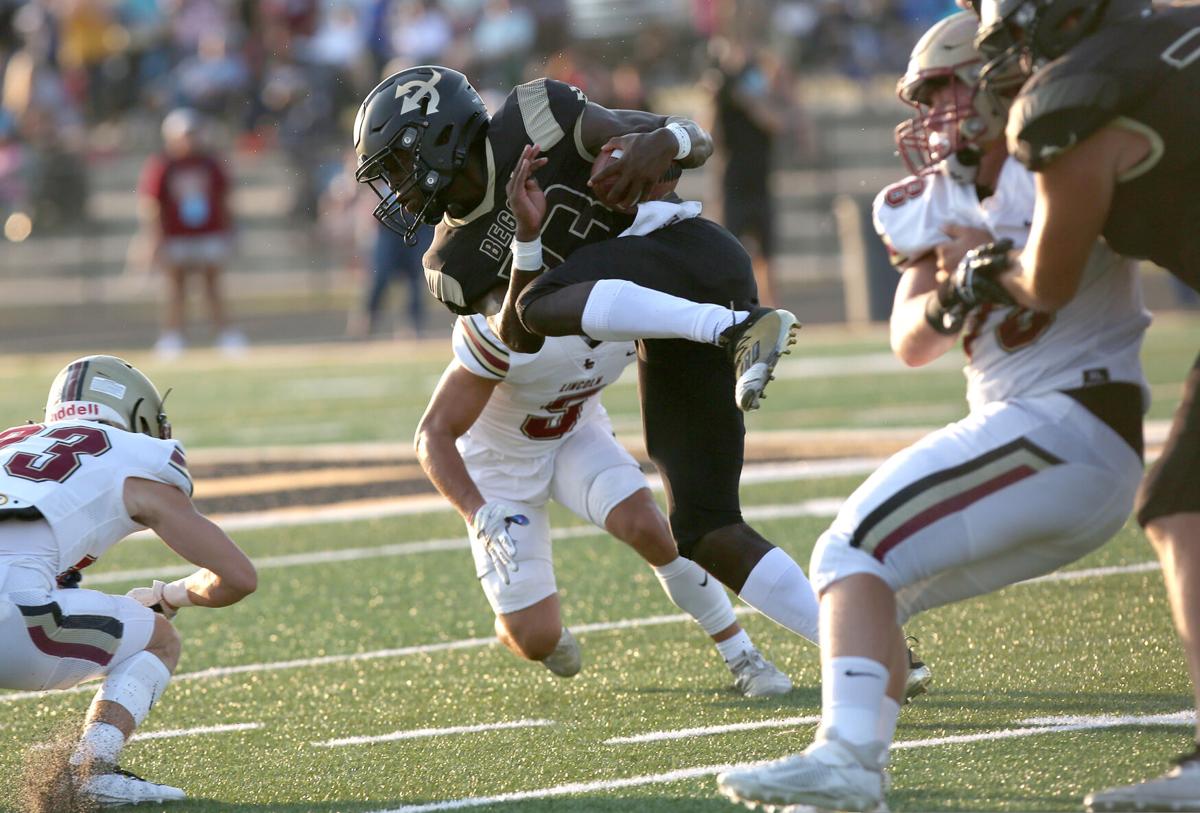 Beggs runnning back CJ Brown carries the ball against Lincoln Christian in both schools' high school football season opener last Friday. On Monday, the school confirmed it has canceled its next game at Rejoice Christian over coronavirus concerns. 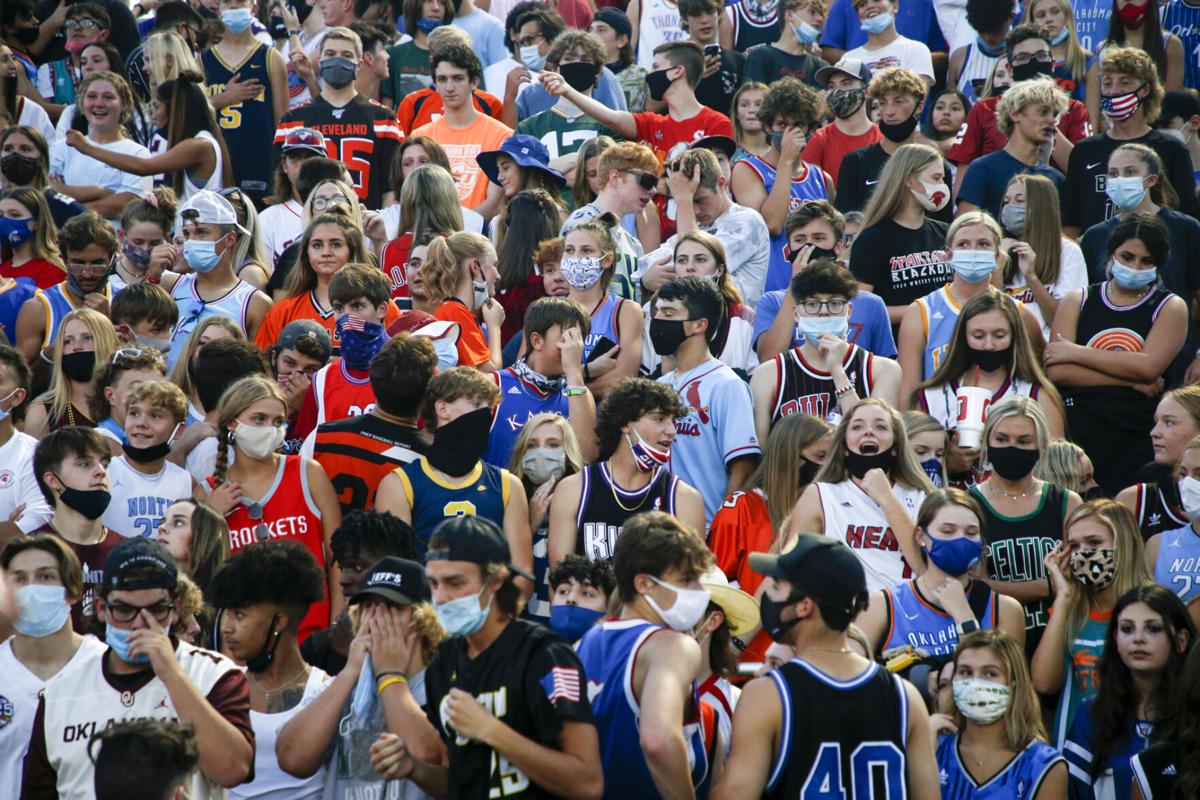 Bixby students talk to one another during a football game between Union and Bixby at Bixby High School last Friday.

Beggs canceled Friday’s contest at Rejoice Christian and the Beggs district went to distance learning until Sept. 9 after “several students and staff members” tested positive for the virus, according to a release on the district’s website.

Lincoln Christian, which opened at Beggs last Friday, took precautions by postponing its home opener against Jones to Sept. 18 when both schools had an open date.

“It is what it is,” Lincoln coach Jerry Ricke said. “Adapt and adjust. We contacted (Jones’ coaches). We saw they had an open date and we just went ahead and moved (the game) in the best interest of everybody.”

Berryhill shut down school for two weeks and canceled games Friday at Fort Gibson and on Sept. 11 at home against Cascia Hall. Fort Gibson has rescheduled with Tecumseh, which had its game vs. Perkins-Tryon cancelled.

Okmulgee added to the list late Monday when it canceled Friday’s home game with Webster.

“I think it was kind of the expectation going into our fall season that there would be some cancellations and postponements,” said David Jackson, executive director of the Oklahoma Secondary School Activities Association. “and we would manage those as they come.”

“Our coaches and teams did extremely well, but it was a bit of a battle to keep our crowd and our students at a social distance,” Bixby director of athletics Jay Bittle said. “We’re working to resolve that before the next game.”

Bixby opened with a 34-0 win over Union and hosts archrival Jenks on Friday night.

Bittle said kids seated in the student section “got a little closer together as the game progressed. We need to do a better job of marking seats where they can and can’t sit and have more adults to remind them when they are getting too close.”

At Broken Arrow on Saturday afternoon, about 300 to 500 spectators bunched shoulder to shoulder in the fenced area off the southwest corner of Memorial Stadium following the Tigers’ 50-23, nationally televised win over Bentonville (Arkansas) West.

Tigers players making their way to the Varsity Training Facility were forced to walk down a narrow passageway between walls of spectators.

Athletic director Steve Dunn said it will be better Friday when when the Tigers host Union.

“In years past, parents were permitted to be on the field with their kids after the game, but not this year,” Dunn said. “It’s just a matter of communicating with them. We’re asking them to leave the stadium, go straight to their cars and not return.”

Jenks limited its crowd to about 30% percent of capacity in Allan Trimble Stadium for the Trojans' 31-15 win over Springdale (Arkansas) Har-ber.

The homeside grandstand was limited to the 1,415 who purchased season tickets. Another 400 students sat in the south end zone, along with the Trojans' marching band, and about 700 tickets went to the visitors.

Jenks athletic director Tony Dillingham said there was room for improvement, "but overall, I thought (the crowd) was good."

He was especially proud of the kids in the student section.

"They were all wearing masks and the (social distancing) was better than it was in the Trojan Preview (held the week before)," he said.

Dillingham said green dots were placed in the student section, staggered between rows “to give them a visual optic about how we think distancing needs to be.”

Gil Cloud said there were no Covid issues with football players after Booker T. Washington hosted Del City on Friday night and McLain hosted Central on Saturday afternoon. But he said the Edison volleyball team has cancelled four matches this week.

Cloud said spectators not wearing masks continue to be a problem.

“We ask you to have a mask when you walk through the gate and use your judgement,” he said. “But if we get a complaint, we’re probably going to go up in the stands and ask you to put on your mask. If you think you can’t do that, you’re probably gonna have to watch from the chain link fence. We may have to spend all of our time going up and down the stairs.”

See Barry Lewis' picks for this week's the top 5 high school football games in the Tulsa Area. B2

Broken Arrow opened its 2020 season last Saturday at home against Bentonville (Ark.) West. Area administrators said they were satisfied with the way fans adhered to safety protocols in Week 0.

Beggs runnning back CJ Brown carries the ball against Lincoln Christian in both schools' high school football season opener last Friday. On Monday, the school confirmed it has canceled its next game at Rejoice Christian over coronavirus concerns.

Bixby students talk to one another during a football game between Union and Bixby at Bixby High School last Friday.