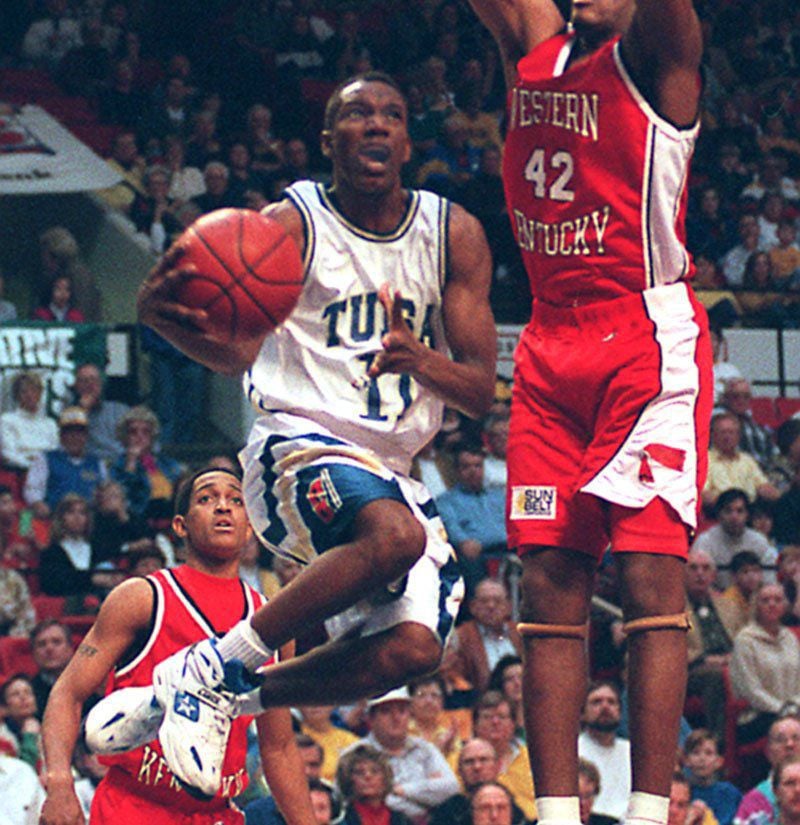 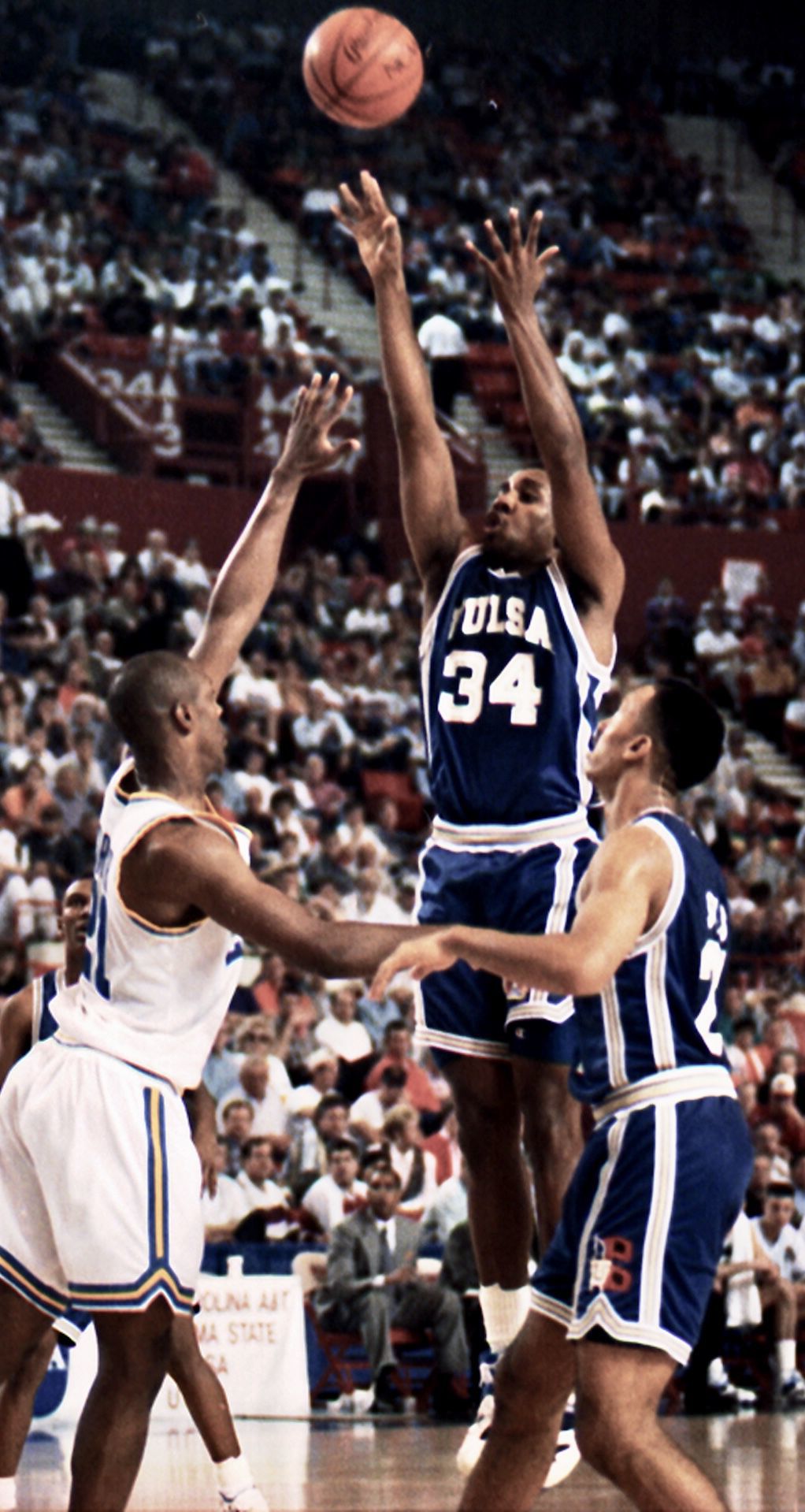 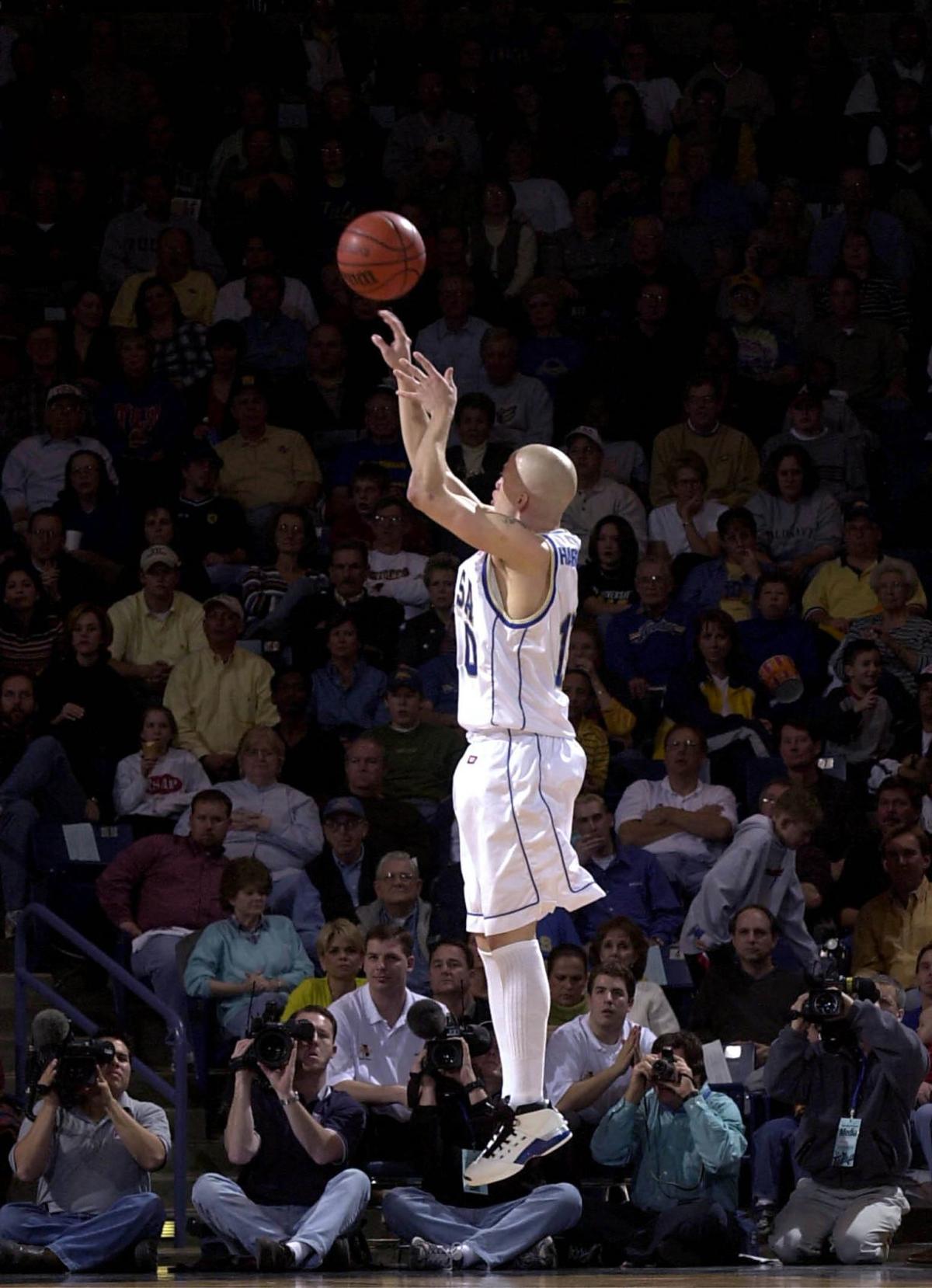 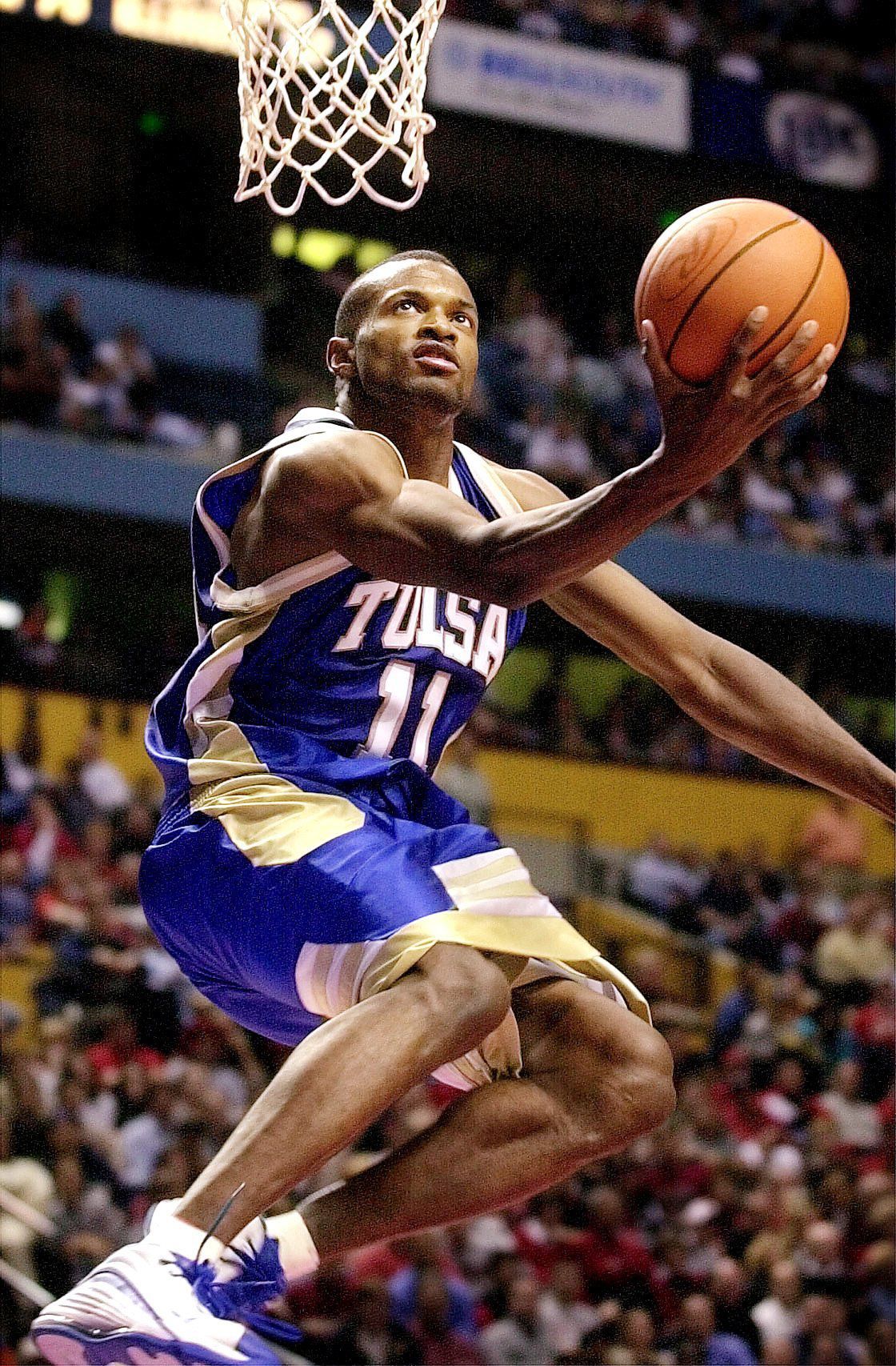 Eric Coley goes up for a shot against Cincinnati on March 19, 2000. Coley did it all in the win over the Bearcats. Tulsa World file 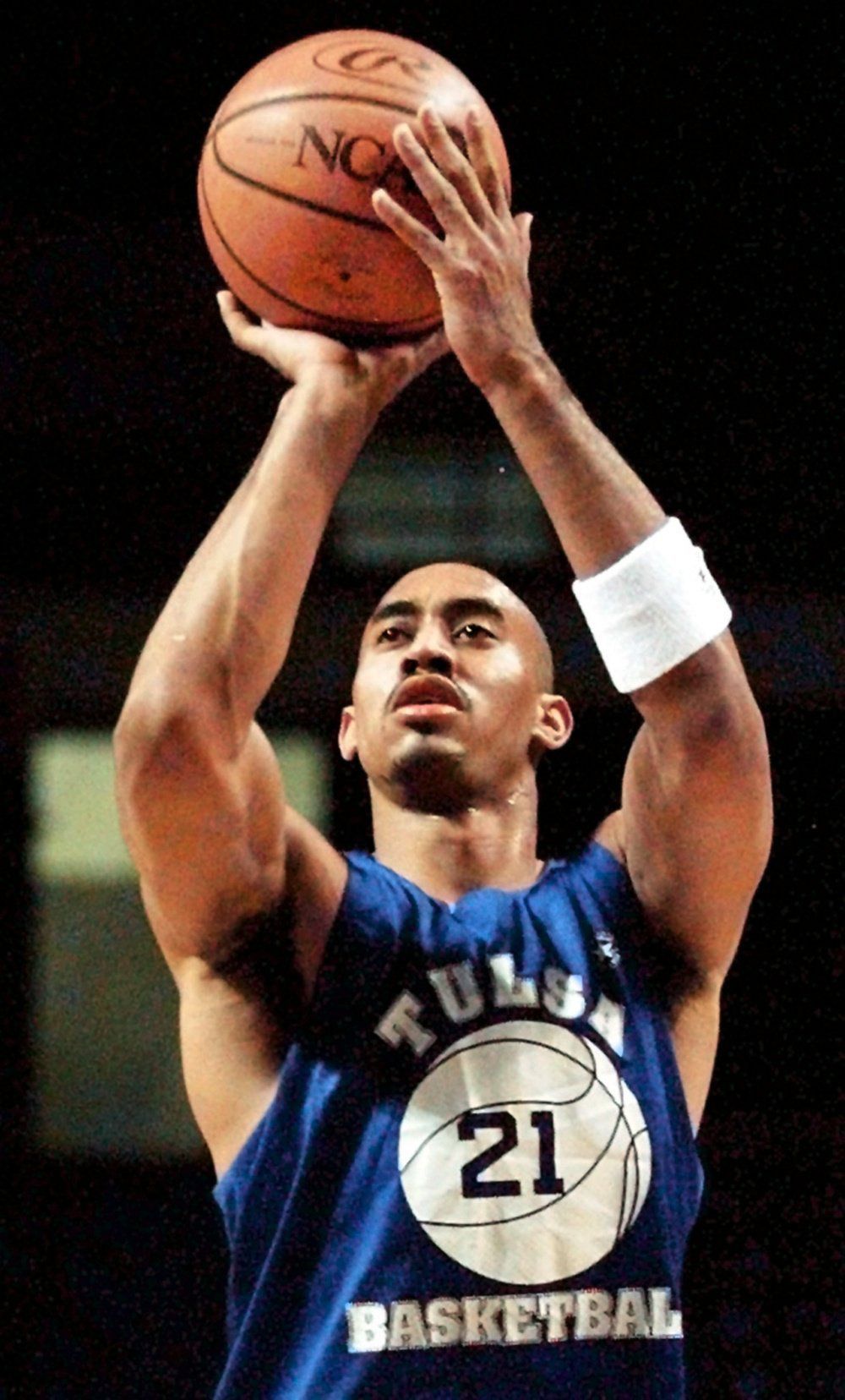 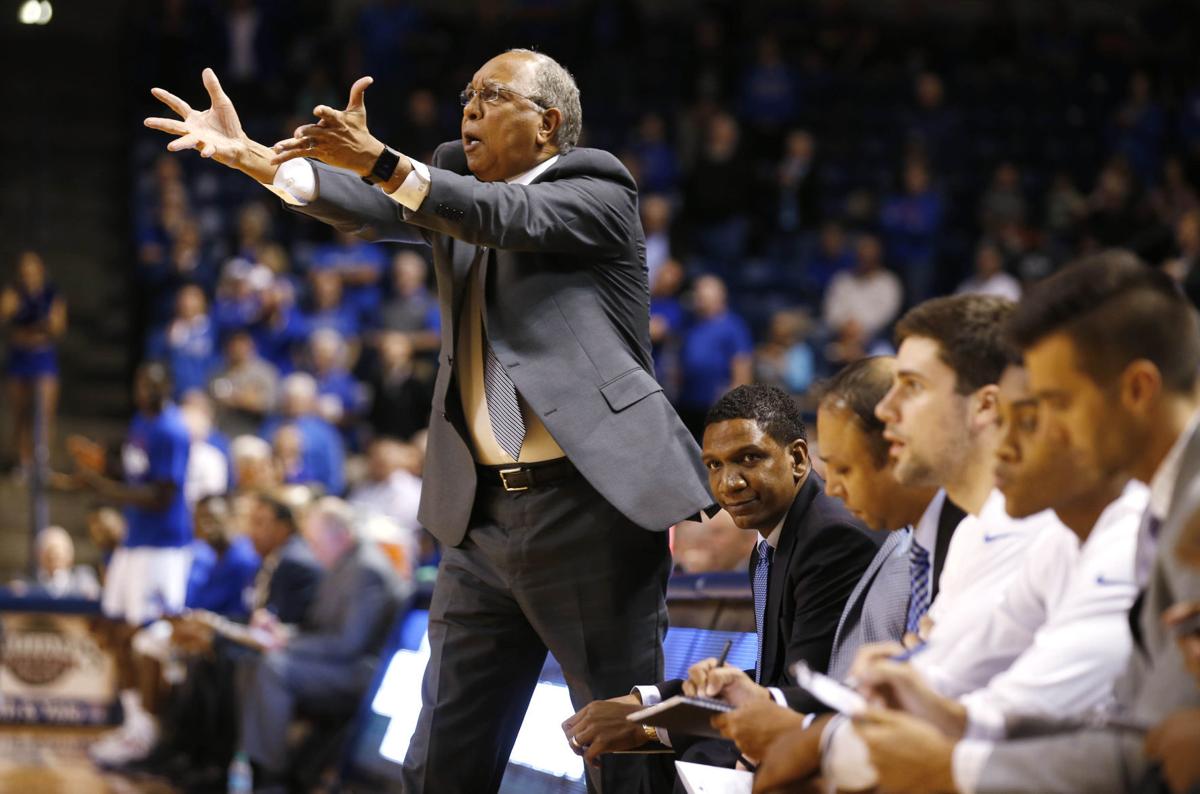 A Beggs native, Williamson was the efficient point guard who helped propel the Hurricane to back-to-back Sweet Sixteen teams. He went on to become TU’s interim coach during the 2004-05 season and is now an assistant at Oklahoma.

One Shining Moment: In the 1994 first-round upset of UCLA, Williamson played all 40 minutes, pouring in 20 points and dishing eight assists. Coupled with a second-round win against Oklahoma State, he totaled 40 points on 19-of-27 shooting with zero turnovers.

The 6-foot-4 Collier worked to develop into an all-around scoring threat in college, and he transformed into the Missouri Valley player of the year as a senior. In his final three games, he made 13-of-27 shots from 3-point range in the 1994 NCAA Tournament.

When Harrington wasn’t scoring, he was setting up his teammates, becoming the career assists leader (551) and setting the single-season record with 201 in 2001. In addition to big plays in the NCAA Tournament, Harrington drained the game-winner in the 2001 NIT quarterfinals, leading to the Hurricane’s championship.

One Shining Moment: In 2002, Harrington helped 12th-seeded TU defeat Dwyane Wade and No. 5 seed Marquette, hitting a go-ahead clutch runner in the lane with 15 seconds left.

A do-it-all player, Coley was the heart and soul of the 2000 team that advanced to the Elite Eight. He remains the program’s career steals leader (299) and delivered seven games with at least seven steals.

One Shining Moment: In a second-round win against Cincinnati in 2000, Coley had an incredible stat line, recording 16 points, 16 rebounds, four assists, four blocks and four steals.

Opting to play for his hometown school, Seals emerged as the leading scorer in program history (2,288 points) along with being TU’s top scorer in NCAA Tournament games (168 points). He is currently a Hurricane assistant coach.

One Shining Moment: As a freshman playing in the first of what would be four consecutive NCAA Tournament appearances, Seals opened with a 20-point, nine-rebound, five-assist outing against UCLA, and he finished with 52 points, 28 rebounds and 16 assists in TU’s three 1994 games.

In his first coaching stop before stints at Georgia, Kentucky, Minnesota, Texas Tech, Memphis and High Point, Smith compiled a 79-43 record in four seasons at TU, highlighted by two Missouri Valley regular-season titles and two appearances in the Sweet Sixteen.

One Shining Moment: In 1994, the Hurricane upset UCLA and OSU before falling to eventual national champion Arkansas. In 1995, TU defeated Illinois and Old Dominion before a loss to UMass. Smith’s success also laid the foundation upon which Bill Self built an Elite Eight roster.

“This is what we’ve worked hard to get to,” TU coach Philip Montgomery said.

Guerin Emig: One player, one problem, one preposterous prediction and one pick for TU-SMU

Four downs: Everything you need to know about TU's big win

Story of the game: Tulsa fell behind 17-0 early in the second quarter before scoring 31 unanswered points.

Eric Coley goes up for a shot against Cincinnati on March 19, 2000. Coley did it all in the win over the Bearcats. Tulsa World file