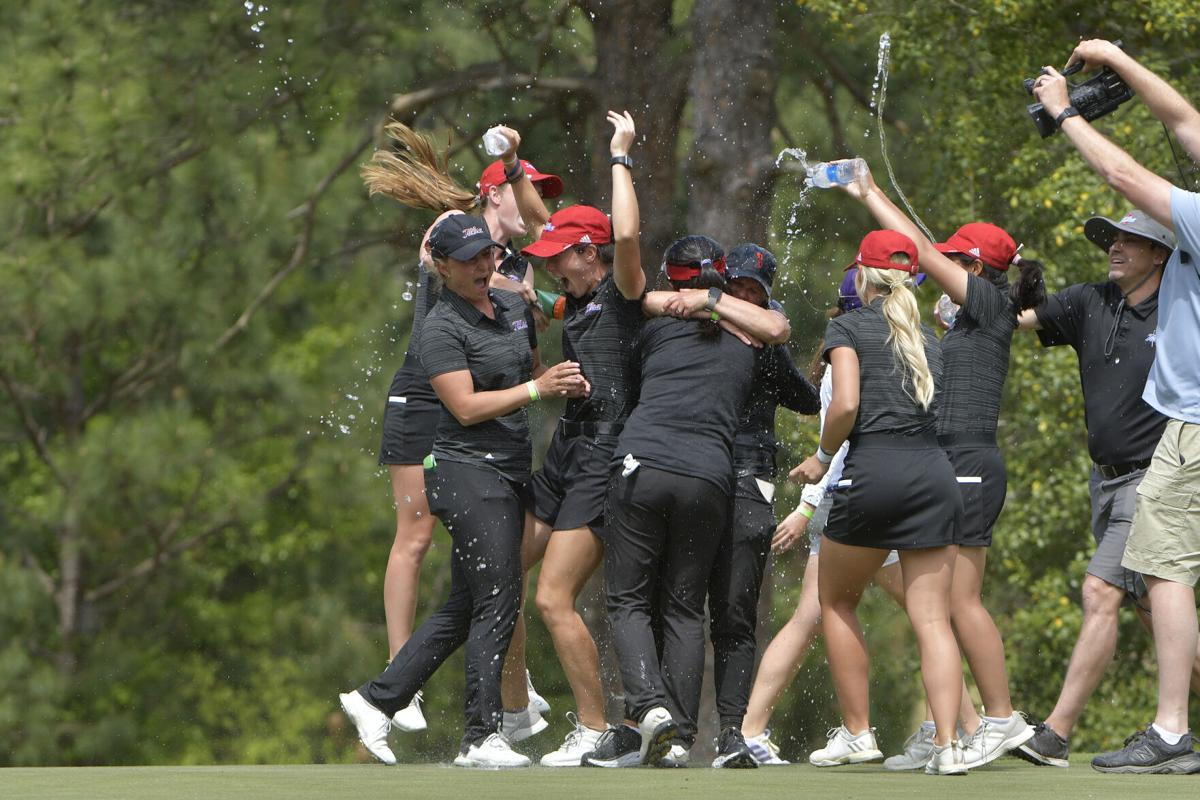 The TU women’s golf team celebrates after winning the AAC Tournament on Tuesday at Pinehurst No. 6 in Pinehurst, North Carolina. 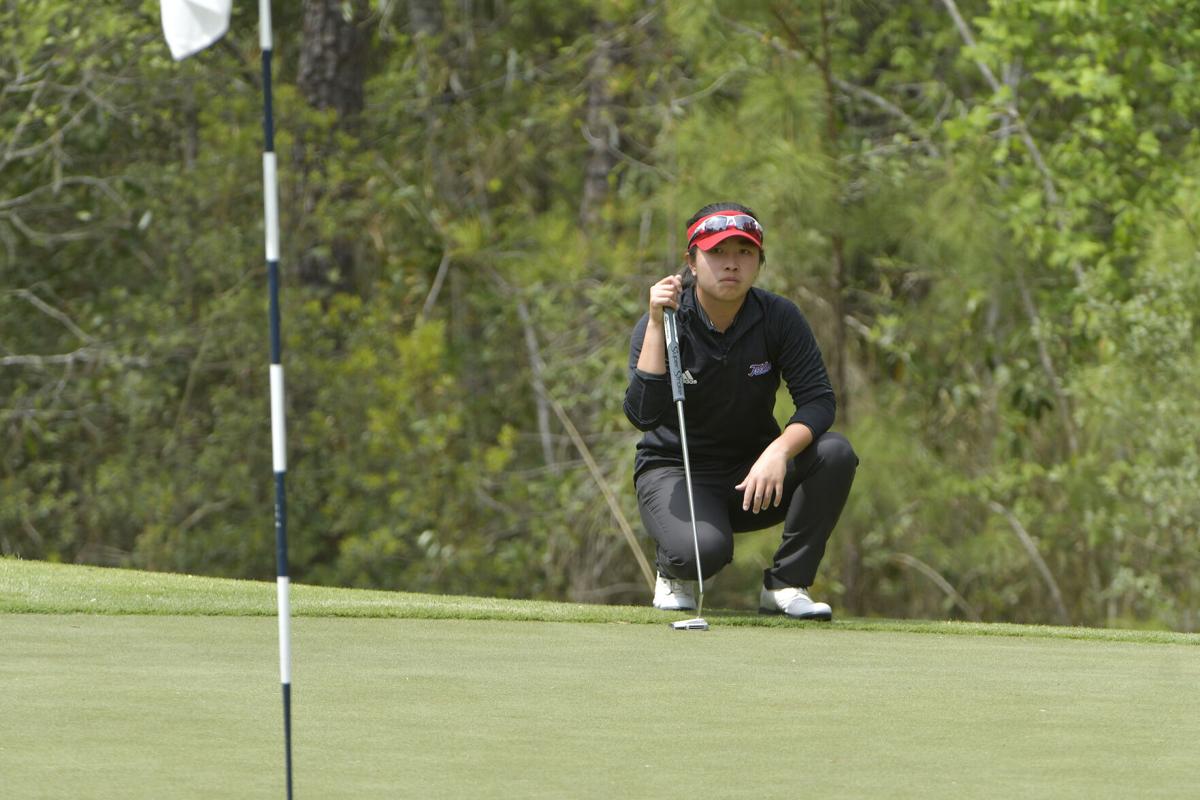 Tulsa’s Lorena Tseng lines up a putt during the final round of the AAC Championship on Tuesday at Pinehurst No. 6 in Pinehurst, North Carolina. Tseng finished runner-up and helped lead TU to the title. 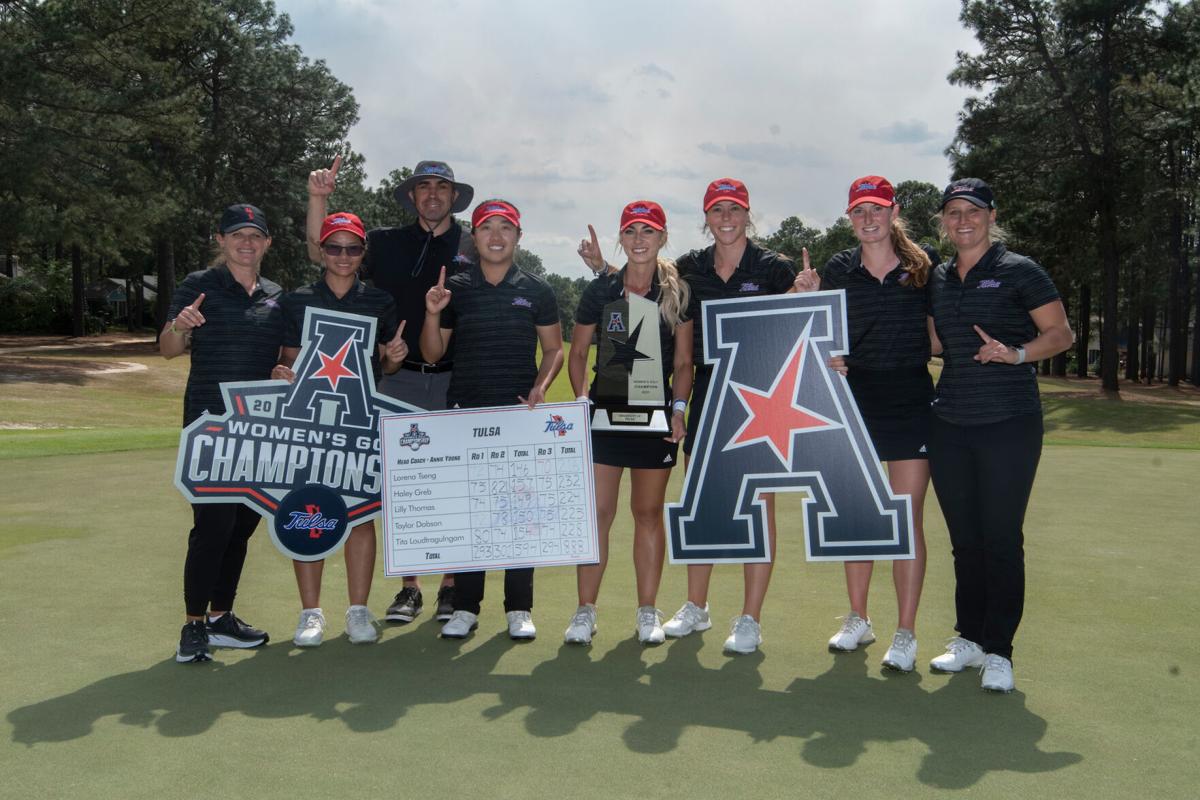 The TU women's golf team won the AAC championship Tuesday at at Pinehurst No. 6 in Pinehurst, North Carolina.

PINEHURST, N.C. — The Tulsa women’s golf team led from start to finish to claim the American Athletic Conference Championship on Tuesday afternoon at Pinehurst No. 6.

The Golden Hurricane were tied atop the leaderboard on the first two days of the three-day event, but finished strong on the final day of the 54-hole tournament with a three-stroke victory over two-time defending champion Houston. TU shot a 294 in the final round to finish with an 888 total. All five golfers placed among the top-30.

Lorena Tseng paced the Hurricane with a 2-under par 70 on Tuesday and moved up from third place after second round play to finish as the tournament runner-up with an even-par score of 216.

Tuesday’s win was the third tournament championship in five events this year for the Hurricane.

“We’ve had just these five girls the entire season. They’re a pretty tough group,” said TU’s third-year head coach Annie Young. “It was a challenge this year, but they’re such a great group of girls. I’m just so impressed and proud of them. It was a gutty performance by our girls.

“They let me push them this year. They’re tough every day. They come ready to work. Last week we got our butts kicked by some really good teams, and they evaluated really, really well that our short game needed to get better and they worked their butts off. I think that was the difference this week, especially today.

“We’ve punched the ticket –– going to regionals. We’re going to enjoy this and then we’ll get back to work.

The victory gives Tulsa the AAC’s automatic bid to the NCAA Championship. It will be Tulsa’s first NCAA Regional appearance since the 2011-12 season.

With Houston already in the clubhouse at 292 and 891 for the three days, East Carolina and Tulsa continued to battle. ECU faltered on the final few holes to drop to third place at 300 on the day, while the Hurricane was able to close-out strong for the win. The Pirates finished six strokes back with an 894 total.

For Tseng, the second-place finish was her 11th career top-5 performance and her 16th top-10 finish in 24 career tournaments. It gave her a top-15 finish in all five events this year.

After totaling 4-over par after four holes in the first two rounds, Tseng began Tuesday 3-under par after those same four holes – shooting par on the first and picking up birdies on holes 2, 3 and 4. The rest of the way Tseng bogeyed two holes and had one more birdie to end as the tournament runner-up, one stroke behind individual medalist Dorthea Forbrigd of East Carolina.

Tulsa freshman Tita Loudtragulngam had her second straight day of 2-over par 74 for her first career top-20 finish as she placed 19th overall with a 228 score. The Hurricane had three 75’s on the final day, coming from Lily Thomas, Taylor Dobson and Haley Greb.

Down the back stretch, Loudtragulngam and Greb each had birdies on hole 16, while Thomas shot 1-under par on the final five holes.

ECU’s Karen Fredgaard held off Tseng on the final hole for a one stroke win with a 1-under par 215.

Tseng’s second-place performance was the best individual finish for a Tulsa golfer in a conference tournament since Sarah Elliot’s second-place finish at the 2009 Conference USA Championship.

The TU women’s golf team celebrates after winning the AAC Tournament on Tuesday at Pinehurst No. 6 in Pinehurst, North Carolina.

Tulsa’s Lorena Tseng lines up a putt during the final round of the AAC Championship on Tuesday at Pinehurst No. 6 in Pinehurst, North Carolina. Tseng finished runner-up and helped lead TU to the title.

The TU women's golf team won the AAC championship Tuesday at at Pinehurst No. 6 in Pinehurst, North Carolina.