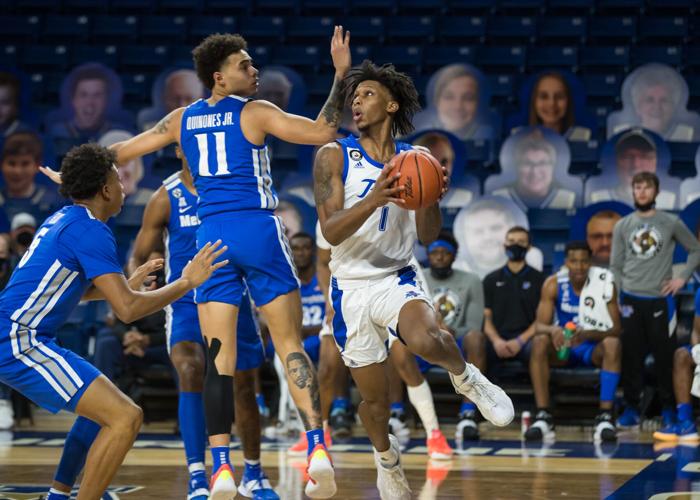 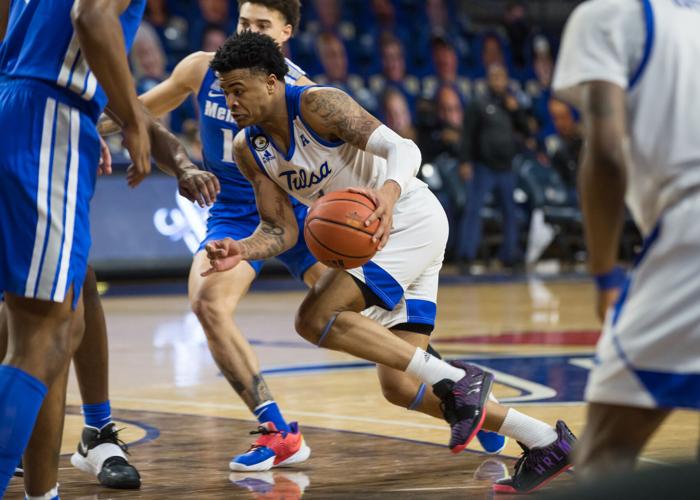 Tulsa’s Elijah Joiner drives past a Memphis player during the Golden Hurricane’s win Sunday at the Reynolds Center. Joiner led all scorers with 14 points. 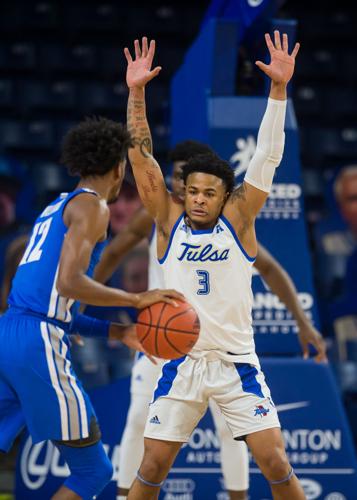 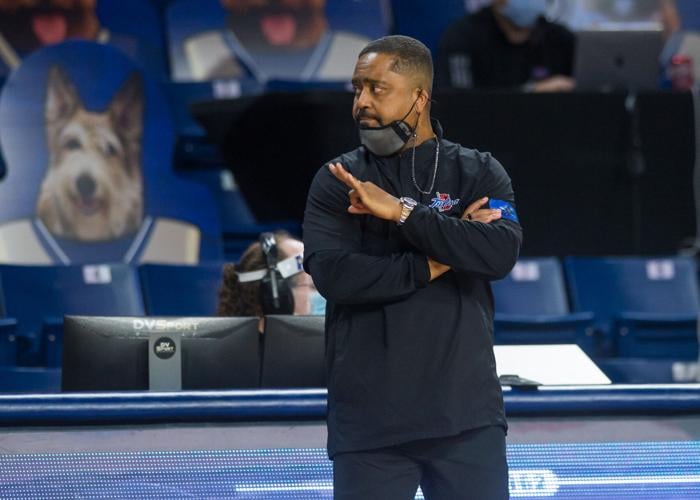 Tulsa coach Frank Haith signals towards the bench during the Golden Hurricane’s victory against Memphis on Sunday at the Reynolds Center. TU rallied to sweep the season series from the Tigers.

Brandon Rachal took the inbounds pass and hurled it down the Reynolds Center court, allowing the clock to run out by the time the ball landed and sealing the University of Tulsa’s 58-57 comeback win against Memphis on Sunday afternoon.

Despite not making a field goal in the final four minutes, the Hurricane effectively executed down the stretch to complete the season sweep against the Tigers and stay undefeated against them at home in the American Athletic Conference era.

“We’re capable of winning these types of games,” senior point guard Elijah Joiner said. “When we step out on the floor, it’s just about doing it and I feel like that’s what we did tonight.”

TU (8-4, 5-2) trailed for almost 30 minutes and was in serious danger of dropping a second game in a row. Joiner knotted the score with six minutes left as part of a 9-0 run for the Hurricane, which relied on crucial baskets from Rey Idowu and Keyshawn Embery-Simpson in that stretch.

Lester Quinones twice nailed corner 3-pointers to trim Memphis’ deficit to two, with the second coming at the one-minute mark. After Joiner made one of two free throws, Rachal picked off a pass but had his shot blocked, giving the Tigers another opportunity with 21 seconds to go.

Landers Nolley, who had repeatedly burned TU in the game, missed a 3-pointer and teammate DeAndre Williams scored on a putback with 2.8 seconds left. In a timeout, the Hurricane drew up the final inbounds play to burn what was left on the clock.

“There’s three seconds left — no time to get fouled,” coach Frank Haith said. “It would be a tough play for them to catch it and turn and shoot. Good execution there on our guys’ part.”

After rallying from an eight-point halftime hole at Memphis last month, TU was down six at halftime Sunday, having shot 36% from the field and turning the ball over on 11 occasions. The offense ignited early in the second half behind Joiner’s ability to drive to the basket.

Joiner, who finished with a game-high 14 points, delivered two and-one plays to briefly put his team on top before the Tigers responded with a 10-2 run that included back-to-back dunks from Malcolm Dandridge.

For the next nine minutes, Memphis (6-5, 2-2) didn’t have a field goal and recorded five turnovers.

Over the past few days, several names have been out in the public as possibilities for the University of Tulsa football coach position.

An Omaha World-Herald source says a family friend was trying to get Joseph to focus on the interview with TU.

Former TU receiver now an up-and-coming Texas assistant who still has quite a story to tell.

Braxton, who started the final two games of the season in place of injured starter Davis Brin — leading the Hurricane to wins over South Florida and Houston — posted to social media Wednesday that he was entering the transfer portal.

It is TU Vice President and Director of Athletics Rick Dickson’s task to sift through the pile of names and come up with the best fit for Tulsa.

Guerin Emig: Philip Montgomery a good man who fell through too many football cracks. Next TU coach can't make that mistake

Montgomery's successor must thrive in margins like discipline and special teams, not fail in them.

While homeless, TU’s Brennan Marion kindled dream of Division I football as he slept in a locker room.

Montgomery had just completed his eighth season as the football’s team head coach. He had a 43-53 record, playing in four bowl games (going 2-2).

Tulsa’s Elijah Joiner drives past a Memphis player during the Golden Hurricane’s win Sunday at the Reynolds Center. Joiner led all scorers with 14 points.

Tulsa coach Frank Haith signals towards the bench during the Golden Hurricane’s victory against Memphis on Sunday at the Reynolds Center. TU rallied to sweep the season series from the Tigers.