Watch live: the State of the Union address 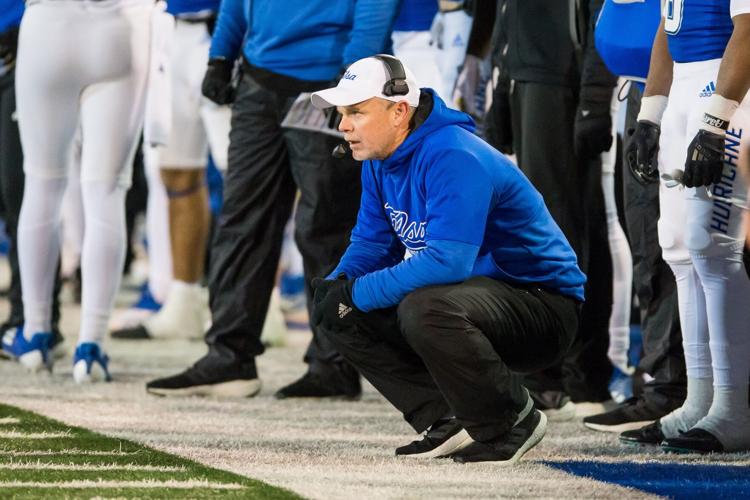 Tulsa Golden Hurricane head coach Philip Montgomery looks on during the game against the South Florida Bulls at H.A. Chapman Stadium in Tulsa on Nov. 18. TU announced it had parted ways with Montgomery on Sunday. 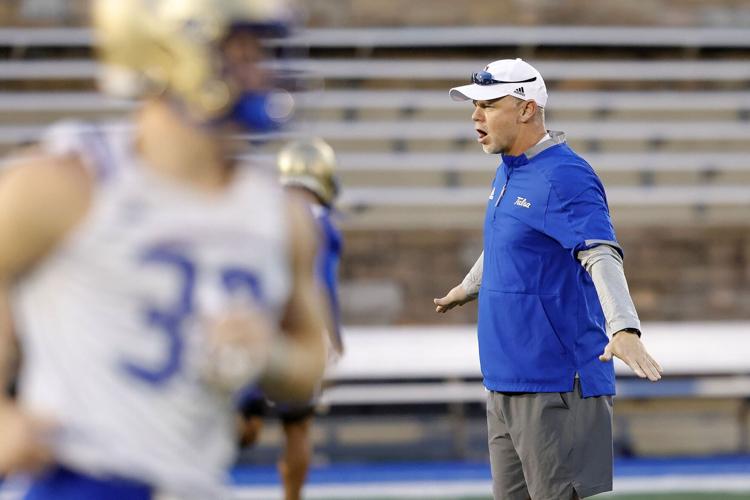 Philip Montgomery had just completed his eighth season as the team's head coach, ending with a 37-30 comeback win over Houston on Saturday night, before he was dismissed by the school on Sunday. 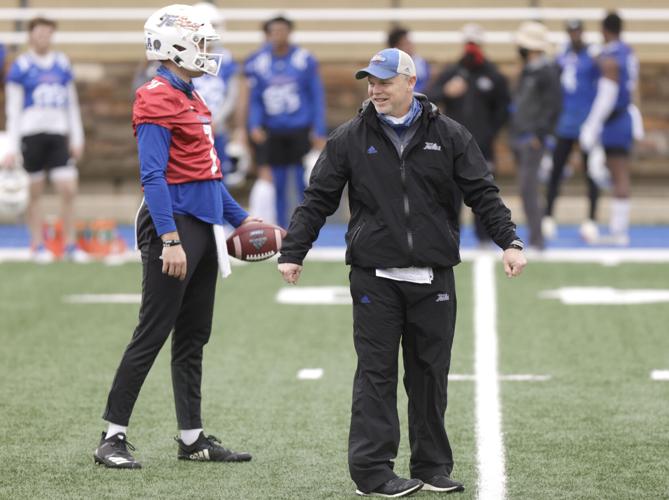 Tulsa QB Davis Brin (left) and Philip Montgomery talk at midfield during a 2021 practice. Brin led the nation in passing after the first three games of 2022 but was injured against Ole Miss, and the Tulsa offense lost some of its edge.

Bill Haisten: Montgomery's departure the end of a tough run

Guerin Emig: Philip Montgomery a good man who fell through too many football cracks. Next TU coach can't make that mistake

The Philip Montgomery era is over.

The University of Tulsa has “decided to make a change” in leadership of the Golden Hurricane football program, parting ways with head football coach Montgomery, TU Vice President and Director of Athletics Rick Dickson announced Sunday.

Montgomery had just completed his eighth season as the team's head coach, ending with a 37-30 comeback win over Houston on Saturday night, leaving the Hurricane with a 5-7 record (3-5 within the AAC) and out of a postseason bowl game.

Over the span of his tenure, Montgomery fashioned a 43-53 record, playing in four bowl games (going 2-2). His 96 games coached ranks third among TU coaches, while his 43 wins leaves him sixth on Tulsa’s all-time coaching list.

“This was an extremely difficult decision, one that affects a number of individuals and is never easy for anyone involved,” Dickson said in a statement. “Philip’s dedication to our student-athletes is unquestioned and we thank him for his tireless efforts in leading our young men. He has represented TU with class and character. We appreciated Philip’s commitment to the University of Tulsa, our football program and the Tulsa community.”

The university will begin a national search for Montgomery’s replacement immediately, Dickson said.

“I’m certainly disappointed that I won’t have the opportunity to continue leading this program,” he was quoted in the school's news release. “For the past eight years, I’ve given the University of Tulsa, our players, and staff everything I have. I’m proud of the way we locked arms and battled through adversity at every turn.”

Montgomery often talked about his team as being part of his family, even invited his players to his house for Thanksgiving dinner last Thursday. He encouraged his players and his coaching staff to mingle their families, and in Sunday's release talked about how much his family will miss the their TU family, invoking his wife Ashli, son Cannon, who played at TU from 2018-21, and daughter Maci, who is currently a TU senior on the Hurricane cheerleader squad.

“Ashli and I will forever be grateful for the relationships and memories created at Tulsa,” Montgomery said. “Our son played here, our daughter cheered here and I’ll always consider those times a blessing. I’m most thankful for the players and staff, past and present, who believed in our vision and gave their all for the team. They mean the world to me, and I’ll always be here for them.”

None of the Tulsa assistant coaches were let go at this time. They will remain on staff through the search process, and their status will be determined by whoever replaces Montgomery.

After Tulsa went 2-10 in 2014 under Bill Blankenship, Montgomery was hired as Tulsa’s 29th head coach on Dec. 11, 2014. He had spent the previous seven years as an assistant coach at Baylor, the last four as offensive coordinator, where the Bears won the Big 12 title in 2013.

But Montgomery led the team to perhaps its best season in his tenure in 2020, when the Hurricane went 6-0 in AAC play, reaching the conference championship game, where it lost 27-24 to then-No. 9 Cincinnati on a field goal as time expired. Then they lost to Mississippi State in the Armed Forces Bowl, 28-26, in a game that was marred by a postgame brawl, as TU finished 6-3 in the COVID-19-shortened season.

The 2021 campaign followed a path similar to this season, as TU started out 1-4 and 3-6, but the Hurricane won its final three regular-season games to become bowl eligible. Then it defeated Old Dominion, 30-17, in the Myrtle Beach Bowl to wind up 7-6 for Montgomery’s third winning season.

Tulsa opened this season with a 2-1 record, then suffered close losses to then-No. 13 Ole Miss and Cincinnati on back-to-back weeks. Quarterback Davis Brin led the nation in passing after the first three games but was injured in that Ole Miss game and the Tulsa offense was never the same again.

After going 1-6 over a span of seven games from the end of September through mid-November, the Hurricane won its last two games, defeating South Florida 48-42 on Nov. 18 and Houston 37-30 on Saturday, with backup QB Braylon Braxton, a redshirt freshman, leading the way offensively.

In the postgame Zoom press conference after Saturday’s game, senior cornerback Tyon Davis, perhaps sensing this move was coming, discussed how much he appreciated playing for Montgomery.

“I love Coach Monty, it’s easy to play for a guy like him,” Davis said. “He’s such a good coach and he’s such a good guy. It’s like, how could you not root for him and not want to play hard for him and not play your heart out? That’s why I’ve stayed this whole time, that’s why I’ve been working hard. I want to make him proud, I want him to know that I trust him and believe in him.”

As for this season’s disappointing record, it’s hard to fault Montgomery for the injuries to Brin that derailed the offensive consistency over the middle stretch of the season, but other moves could be questioned.

For example, the decision to play Brin against Cincinnati, when he could barely move around and was sacked nine times in Tulsa’s 31-21 loss. He also started in the 26-10 loss to Memphis on Nov. 10 and was subsequently pulled in the second quarter for performance reasons and never returned to the field.

“On behalf of the Trustees, I thank Philip for his commitment to TU,” Carson said. “He and his coaching staff have built a program centered on the student-athlete, both athletically and academically. TU remains committed to those student-athletes through this transition.”

This is a developing story. Check back for updates.

As the University of Tulsa launches its search for a head football coach, here are a few of the names who could emerge as candidates:

• Justin Fuente: A former Union and OU quarterback and formerly the head coach at Memphis and Virginia Tech.

• G.J. Kinne: The Incarnate Word head coach is a former TU quarterback who was on the Hurricane roster as recently as 2011.

• Seth Littrell: The North Texas head coach was a football star in his hometown of Muskogee and a team-captain member of OU’s 2000 national championship team.

• Loren Montgomery: As the Bixby head coach, Montgomery built a dynasty that recorded 58-game win streak and this week bids for its eighth state title in nine years.

• Barry Odom: The Missouri head coach in 2016-19 and the Arkansas defensive coordinator since 2020.

• Holman Wiggins: Alabama’s wide receivers coach. In 2011, as a member of Bill Blankenship’s Tulsa staff, Wiggins coach the Hurricane H-backs. This year, Wiggins was the primary recruiter of Owasso receiver Cole Adams, who committed to the Crimson Tide after having considered OU and Arkansas as finalists.

Philip Montgomery’s record at Tulsa over the years

Bill Haisten: Shaker Reisig as TU's next Shea Seals? It could happen

If Shaker Reisig does eventually commit to TU, it could influence other Oklahoma stars to more strongly consider the Hurricane.

The Hurricane wound up with the reigning Tulsa World high school football players of the year.

Tulsa basketball coach Eric Konkol: "To be discouraged means there’s an absence of hope, and that’s not acceptable here.”

TU signing day: A look at the players who signed Wednesday

Tulsa Golden Hurricane head coach Philip Montgomery looks on during the game against the South Florida Bulls at H.A. Chapman Stadium in Tulsa on Nov. 18. TU announced it had parted ways with Montgomery on Sunday.

Philip Montgomery had just completed his eighth season as the team's head coach, ending with a 37-30 comeback win over Houston on Saturday night, before he was dismissed by the school on Sunday.

Tulsa QB Davis Brin (left) and Philip Montgomery talk at midfield during a 2021 practice. Brin led the nation in passing after the first three games of 2022 but was injured against Ole Miss, and the Tulsa offense lost some of its edge.