TU at No. 11 Oklahoma State: Miscues doom Hurricane in painful 16-7 loss
Share this
{{featured_button_text}}
1 of 2 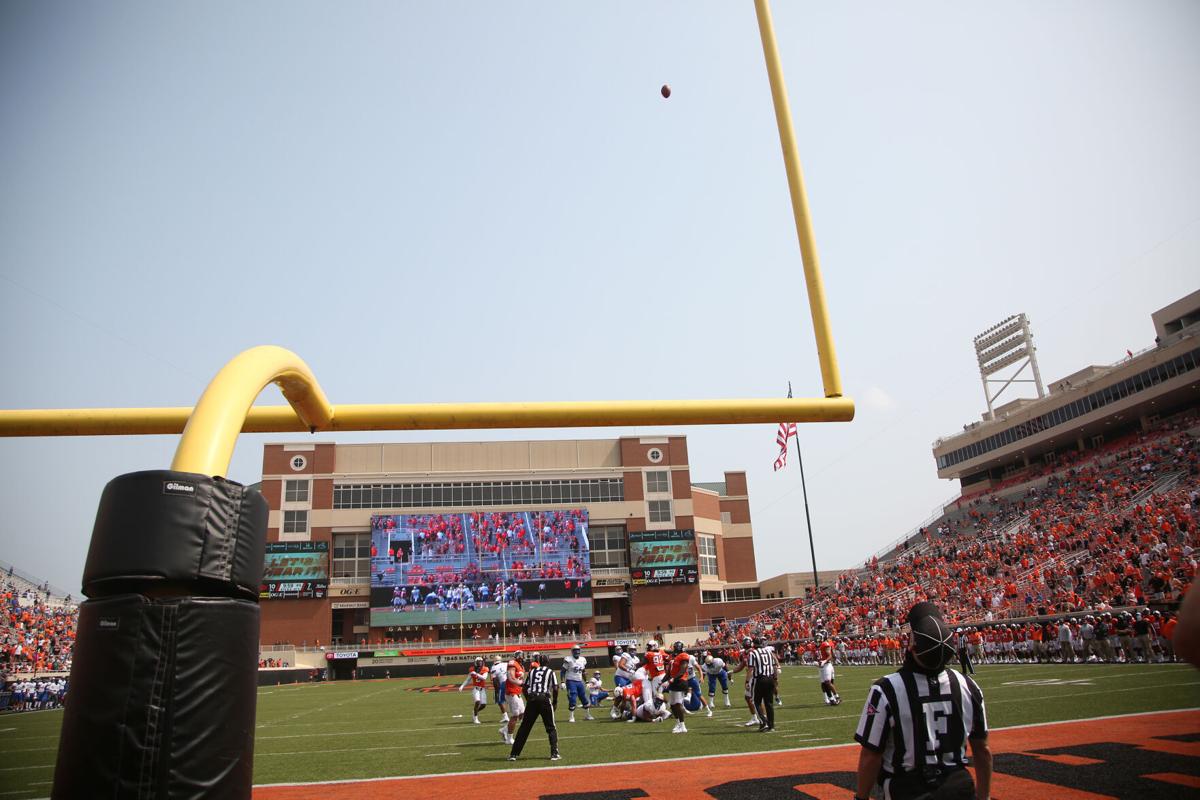 A field-goal attempt by Tulsa, which would have tied the game at 10, sails wide left during the second half of the season opener Saturday at Boone Pickens Stadium in Stillwater. 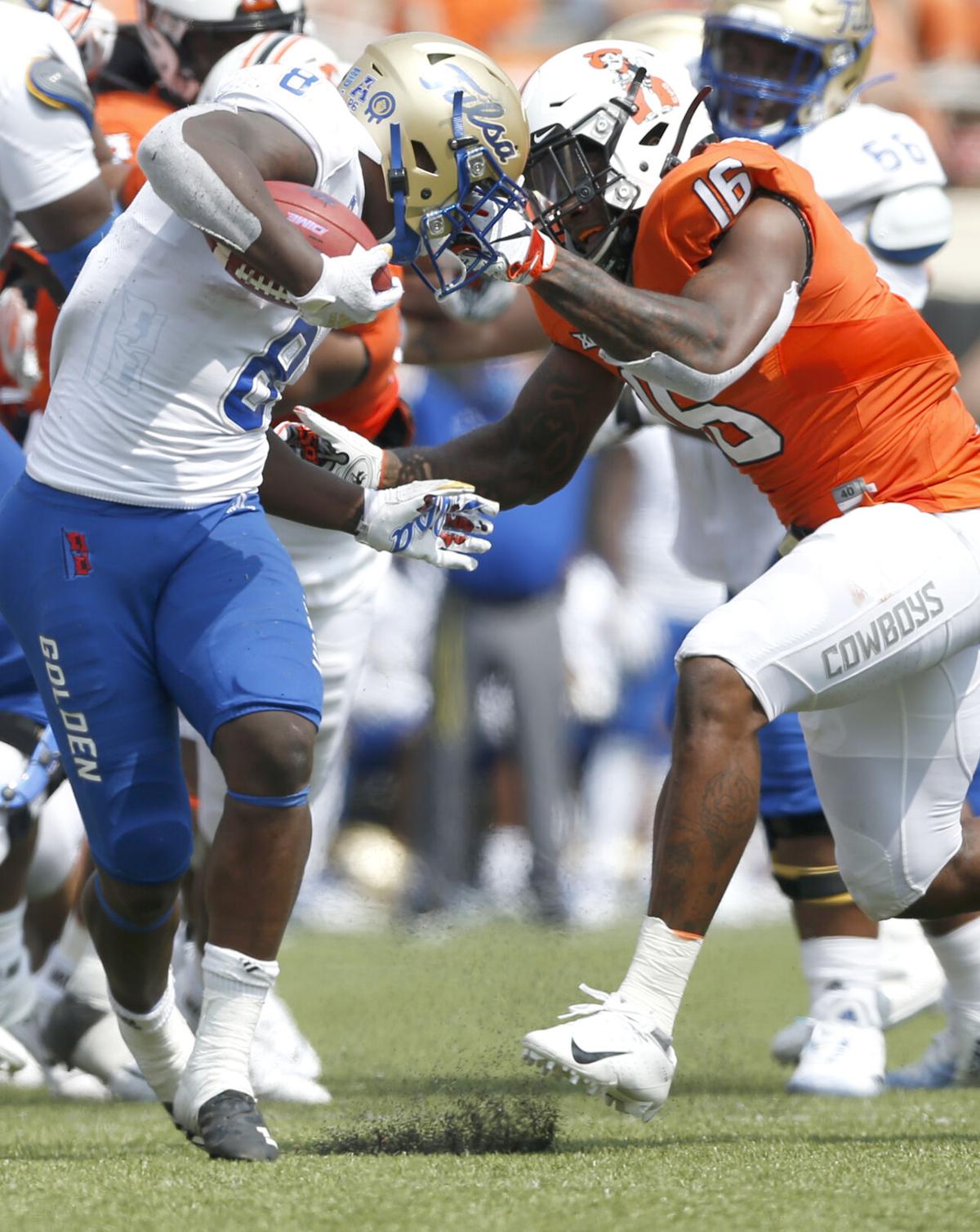 Tulsa running back Deneric Prince’s face mask was pulled by Oklahoma State’s Devin Harper during a carry Saturday. Prince received the majority of TU’s carries with Shamari Brooks (torn ACL) and Corey Taylor II (returning from quarantine) both out.

STILLWATER — Instead of opening the season with a historic win, the University of Tulsa left Boone Pickens Stadium with flashbacks of previous losing seasons defined by miscues.

In Saturday’s 16-7 defeat to No. 11 Oklahoma State, the Hurricane went 0-for-11 on third down, had 15 penalties, including one that negated a touchdown, missed a field goal and got another taken off the board because of an ill-timed timeout.

“We hurt ourselves with too many penalties; we just had too many penalties as a team today,” coach Philip Montgomery said. “Some of that is first-game stuff that we’ve got to get corrected. We’re going to learn a lot from this tape.”

Film sessions will be painful. In a particularly brutal moment, TU led 7-3 when it faced third-and-2 in the third quarter. What followed was a delay-of-game penalty out of a timeout, leading to a punt.

“It just seemed like every time we had something substantial we had a penalty or were shooting ourselves in the foot in some way or another,” quarterback Zach Smith said. “It’s hard to get a rhythm going whenever that stuff’s happening. We’ve got to clean that up, which we will.”

After the Cowboys took a 10-7 lead on the first play of the fourth quarter, the Hurricane produced a solid drive that included big plays from running back Deneric Prince. He received the majority of the carries with Shamari Brooks out after tearing his ACL in practice this week and Corey Taylor II recently coming out of quarantine.

Prince put TU inside the 10-yard line, but the opportunity was wasted. A false start occurred on a perfectly executed touchdown play and then freshman Tyler Tipton missed a short field goal.

“We had a chance to go down and answer right there,” Montgomery said. “We took the ball straight down the field and had to fight through some adversity to get the ball inside the 5-yard line. Then we were down there in all the noise and got delayed on the snap.

“It’s frustrating, but we’re going to learn from it. From an effort standpoint, you can’t question the effort we gave throughout the game in all three phases. Now, we just have to learn and get better.”

With the offense experiencing limited success because of penalties, the defense was exceptional for much of the game. OSU quarterback Spencer Sanders left with an early injury and backup Ethan Bullock struggled under pressure from the Hurricane, which had six sacks through eight series.

Three of those were from linebacker Zaven Collins, whose third-quarter departure for the locker room to get fluids coincided with the Cowboys finding rhythm offensively. Collins didn’t play for most of the second half, when OSU gained 180 of its 277 yards.

OSU running back Chuba Hubbard and wide receiver Tylan Wallace, two of the best skill-position players in the country, were limited to fewer than 100 yards apiece. The Hurricane also forced two turnovers — an interception and a fumble.

TU’s lone score came late in the first half on a pass from Smith to Josh Johnson, and the Hurricane had a chance to win the game in the closing minutes but instead committed three penalties and gave up a sack on fourth down, a sequence that likely haunted the team for the 72-mile bus ride back to campus.

“They’re the No. 11 team in the nation,” Montgomery said. “We had our opportunities to win this game, for sure.”

The unfortunate reality of a COVID-ravaged season: At this point, the University of Tulsa could be well on its way to a special year.

Until the coin toss, University of Tulsa coach Philip Montgomery might doubt whether Friday night’s game at South Florida will be played.

The stop-and-start nature of the season has been difficult to navigate, with three games canceled and two others postponed because of COVID-19.

Bill Haisten: A first since 1941 – an October Saturday without football involving OU, OSU or Tulsa

Saturday was empty for fans of the Sooners, Golden Hurricane and Cowboys. It was the first such Saturday since Oct. 4, 1941.

TU at USF: Storyline, matchup and player to watch

Bill Haisten: TU loses opportunity to get a signature win on a significant TV platform

Through the first six weeks of the season, college football television ratings are substantially below 2019 ratings.

TU national team of the week

A field-goal attempt by Tulsa, which would have tied the game at 10, sails wide left during the second half of the season opener Saturday at Boone Pickens Stadium in Stillwater.

Tulsa running back Deneric Prince’s face mask was pulled by Oklahoma State’s Devin Harper during a carry Saturday. Prince received the majority of TU’s carries with Shamari Brooks (torn ACL) and Corey Taylor II (returning from quarantine) both out.