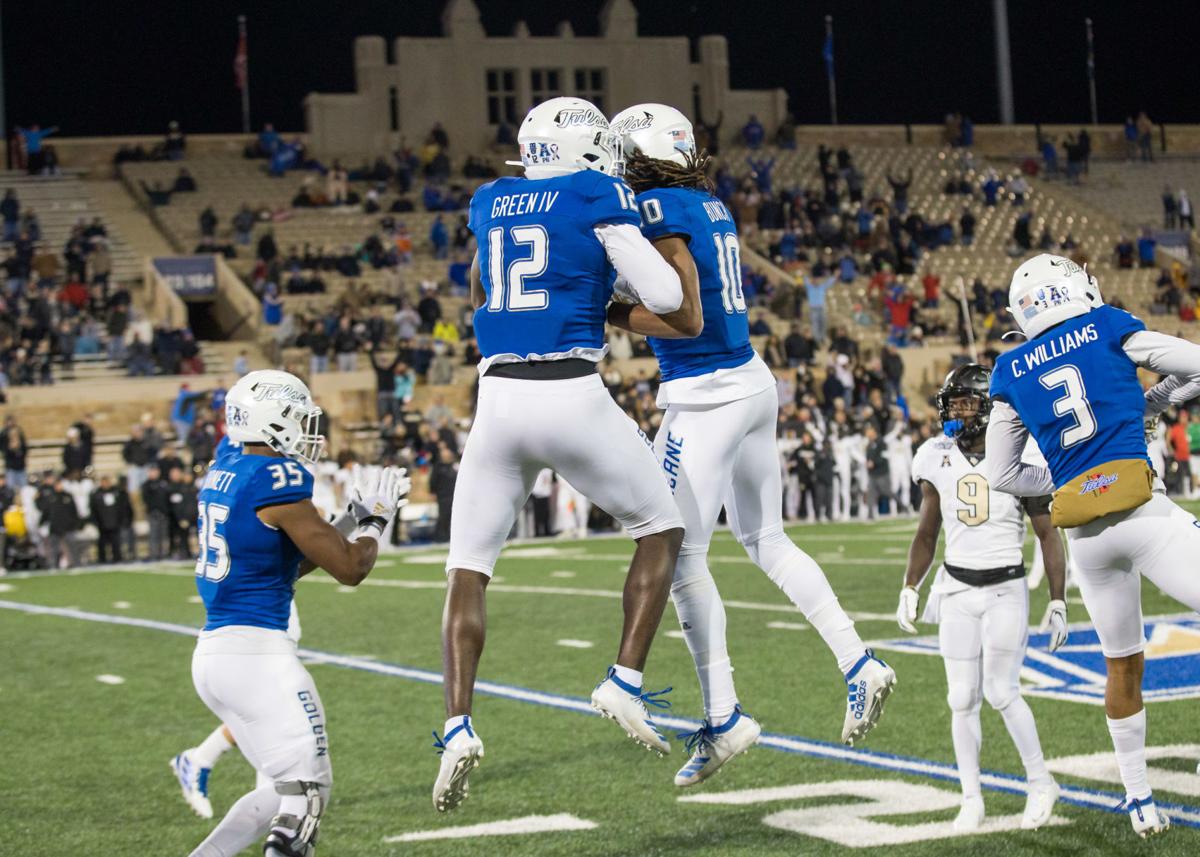 Tulsa defensive backs Allie Green IV (second from left) and Manny Bunch jump in the air to celebrate after stopping UCF on fourth down late in the game Friday night. BRETT ROJO/for the Tulsa World 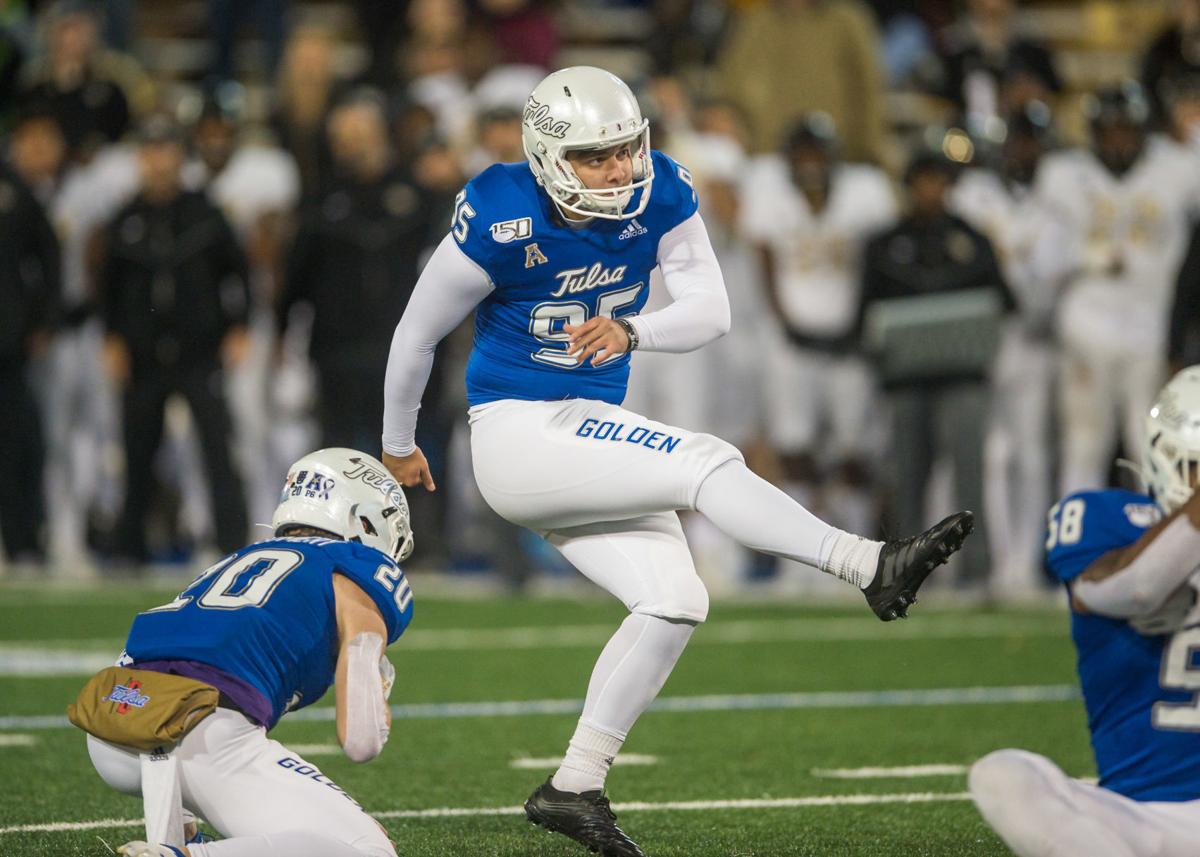 Tulsa Golden Hurricane place kicker Jacob Rainey (right) kicks a field goal to put Tulsa up 34-31 late in the fourth quarter against the UCF Knights during the football game at H.A. Chapman Stadium in Tulsa, OK on 11/8/19. BRETT ROJO/For the Tulsa World

This time, Jacob Rainey’s kick went through the uprights.

Rainey, the University of Tulsa’s freshman place-kicker, made a 23-yard field goal with 5:09 remaining Friday night that ultimately gave the Golden Hurricane a 34-31 victory over UCF at H.A. Chapman Stadium.

“Couldn’t be happier for (Rainey),” TU coach Philip Montgomery said. “Very proud of his resilience through the tough times because our team did a great job of rallying around him.

“He got a lot of unnecessary, undue stuff from the outside part (after the miss against Memphis), but our team stayed solid with him. He stepped up, made some big kicks tonight and (we) couldn’t be happier for him.”

While games have not ended well for TU recently, they haven’t started great, either. But it was a different start and finish for the Hurricane on Friday.

TU was the first to score, on a Shamari Brooks’ 1-yard run on the Hurricane’s second possession. Brooks’ score was TU’s first first-quarter TD since Week 3 against Oklahoma State.

UCF answered with back-to-back touchdowns, though, to end the first quarter up 14-7. Rainey ended the Golden Knights’ run with a 31-yard field goal early in the second quarter. The Hurricane’s next score came via a TD pass from Zach Smith to Keenen Johnson for 35 yards. Smith left the game later in the half with a left knee injury and never returned. Montgomery said after the game he did not know the severity of Smith’s injury.

Seth Boomer, who started eight games for TU last season, replaced Smith and played the second half, during which the Hurricane outscored UCF 17-3 after trailing 28-17 at intermission.

Boomer hit Sam Crawford Jr. in the corner of the end zone for a 17-yard TD to tie the game at 31 with 9:14 left. A play before that, the two connected for a 19-yard gain to convert a fourth-and-9.

“That was huge,” Boomer said. “We absolutely had to have that.”

The next score was Rainey’s field goal before the TU defense stymied UCF and the Hurricane ran out the clock.

TU’s win ended a five-game losing streak and improved the Hurricane to 3-7 before its second bye week. It was also TU’s first game since its bowl chances were erased with a loss to Tulane last week.

“Pride is something that we carry high,” TU defensive end Trevis Gipson said. “After those tough losses that we’ve encountered throughout the season, it gets us down a little bit, but at the end of the day, we just come back and work hard and persevere.”

View from the field: See the best images as Tulsa hosts a Friday night game against UCF

Guerin Emig: One player, one problem, one preposterous prediction for TU-Ohio State

When the University of Tulsa played at Ohio State five years ago, the crowd of 104,410 was by far the largest for a game in Hurricane history.

TU at No. 9 Ohio State: Everything you need to know about the game in four downs

Tulsa came close to pulling off only the second win in program history against a top-10 team.

Instead of dwelling on what could be viewed as bad luck, University of Tulsa linebacker Yohance Burnett is counting his blessings.

Including Saturday's 28-23 loss at Oklahoma State, the University of Tulsa has dropped 13 consecutive games against teams from Power Five conferences.

TU at No. 9 Ohio State: Opportunity awaits for the Hurricane

The Hurricane is a four-touchdown underdog going up against a top-10 team on the road, in front of 100,000 fans rooting for its demise.

Tulsa at No. 9 Ohio State: Top storyline, key matchup, player to watch and who wins

A look at Saturday's game between Tulsa and No. 9 Ohio State.

Through three weeks of the college football season, the University of Tulsa finds itself among nine FBS teams looking for their first wins.

Three things we learned from TU's 28-23 loss to OSU

After two losses determined by a total of seven points, the University of Tulsa heads into Week 3 as a four-touchdown underdog at No. 9 Ohio State on Saturday.

Four starters were among the players who did not play due to suspensions stemming from the postgame bowl brawl against Mississippi State in December.

Tulsa defensive backs Allie Green IV (second from left) and Manny Bunch jump in the air to celebrate after stopping UCF on fourth down late in the game Friday night. BRETT ROJO/for the Tulsa World

Tulsa Golden Hurricane place kicker Jacob Rainey (right) kicks a field goal to put Tulsa up 34-31 late in the fourth quarter against the UCF Knights during the football game at H.A. Chapman Stadium in Tulsa, OK on 11/8/19. BRETT ROJO/For the Tulsa World