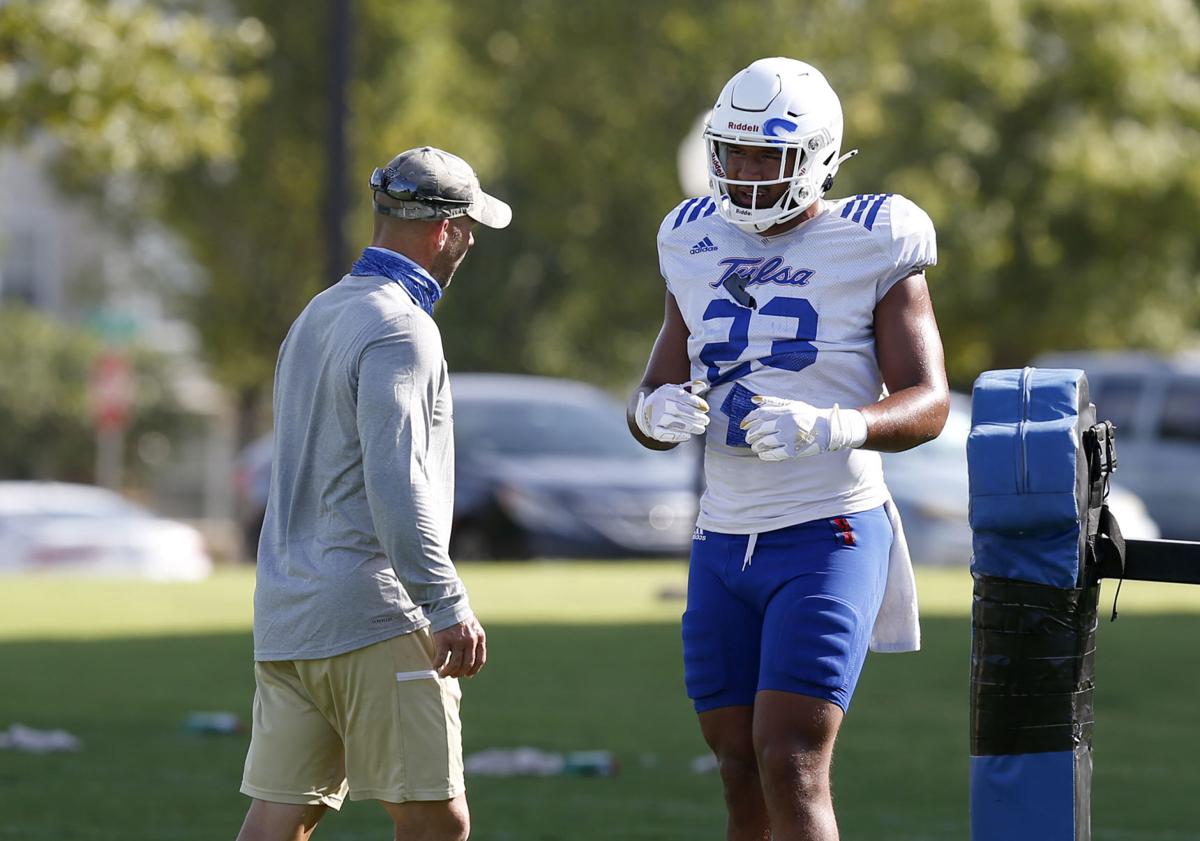 After several years of struggles on the defensive side of the ball, the Hurricane switched to a 3-3-5 alignment in 2018 under coordinator Joseph Gillespie (left). Zaven Collins (right) leads TU with 7½ tackles for loss.

In Year 3 of its defensive system, the University of Tulsa is on track for a record-setting season.

The Hurricane is averaging a dozen tackles for lost yardage, well above the record total of 7.9 per game established by the 2012 team.

“We’ve got guys with experience that have been playing in this defense now for a little bit longer and figuring out opportunities to really be aggressive and attack,” TU coach Philip Montgomery said. “I think a lot of that just goes back to really doing a good job of tackling.

“Our guys have really swarmed the football and we’ve created some pressures and opportunities to get those tackles for losses by being aggressive.”

The sample size is small — TU has played two games through six weeks and is coming off an open date — but the defense has been overwhelmingly impressive. Twelve players have contributed to the TFL total, led by 7½ from standout linebacker Zaven Collins.

“They’re flying around getting to the football,” Montgomery said. “We’re tackling as well as I’ve ever seen us tackle and we’re doing a great job of putting pressure on offenses.”

The Hurricane is allowing 369.5 yards per game, having played two elite offenses: Oklahoma State and Central Florida. After losing to the 11th-ranked Cowboys on Sept. 19, TU bounced back two weeks later with a thrilling comeback at No. 11 UCF.

In that game, the high-powered Knights were limited to three points after halftime.

“We were focused in,” Collins said. “I think it was due to the maturity of our defense. ... I think we did a good job of not losing sight of what we wanted to do and that was win.”

After several years of struggles on the defensive side of the ball, the Hurricane switched to a 3-3-5 alignment in 2018 under coordinator Joseph Gillespie.

The impact was immediate, with a decrease of more than 120 yards per game. Last season, TU gave up fewer than 400 yards per game for the first time since 2012.

The ceiling is high for this year’s unit, which has a chance to match the production of the 2012 defense that helped deliver a Conference USA championship. Each position group has excelled in the early going — a disruptive defensive line, a relentless group of linebackers and a speedy secondary.

“This is a defense that really plays well with each other,” Montgomery said. “It is our defense as a whole that makes us who we are. Those guys are playing with a ton of confidence.”

No. 11 Cincinnati at Tulsa

Eric Bailey: Lasting memory was photo with my son, who was in the TU band

The blue fedora with a red feather is worn on the sidelines by a Hurricane player who scores a touchdown.

The University of Tulsa was head and shoulders better than an American Athletic Conference opponent, something that has rarely happened since the 10-win season in 2016.

East Carolina at Tulsa: Storyline, matchup and player to watch

The Hurricane has played more games this season in Florida (wins against UCF and USF) than it has in Oklahoma (a loss at Oklahoma State).

The Hurricane has finished better than its preseason projection in each of the previous six years in the league including at least two spots higher five times.

John Flanders: 'I didn’t know I caught it at first'

After several years of struggles on the defensive side of the ball, the Hurricane switched to a 3-3-5 alignment in 2018 under coordinator Joseph Gillespie (left). Zaven Collins (right) leads TU with 7½ tackles for loss.