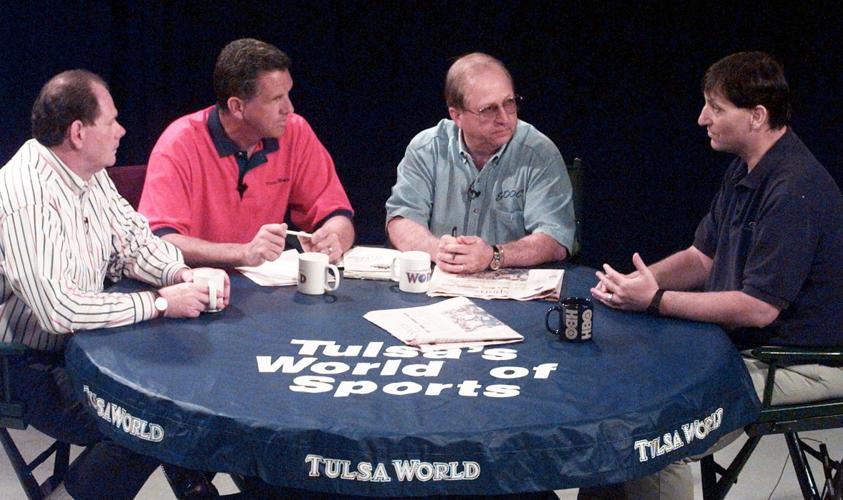 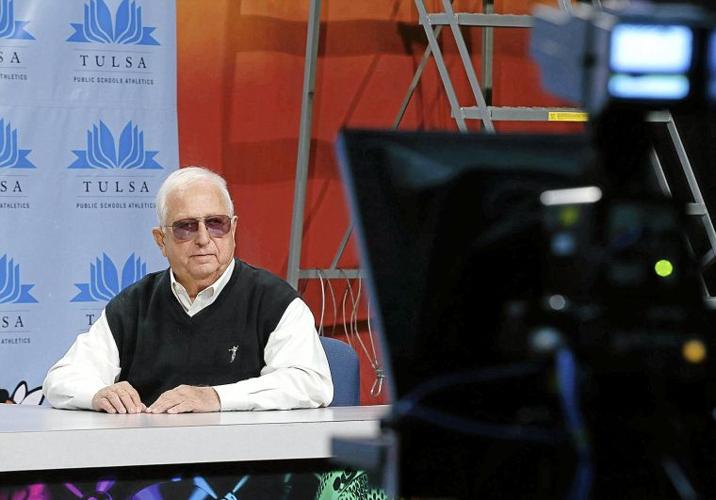 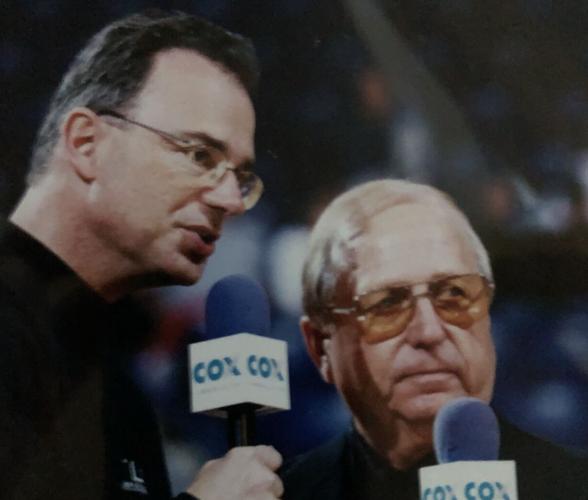 Don King (left) and J.V. Haney are pictured during a 2002 Cox cable telecast. On Wednesday, Haney died at 89. 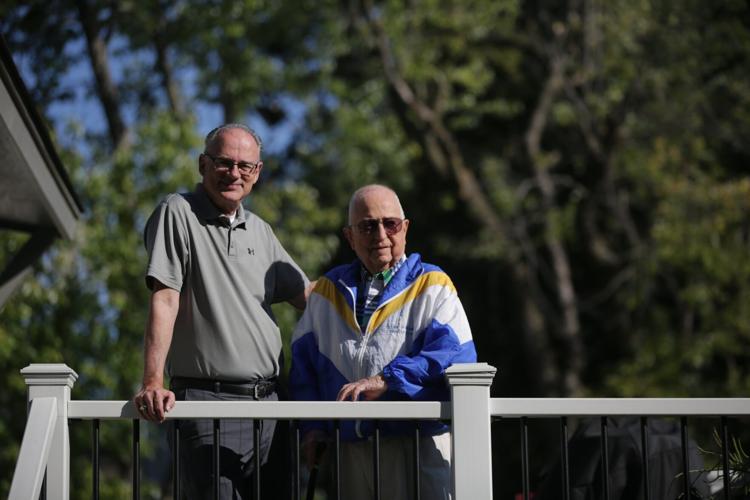 J.V. Haney became renowned on each side of the sports aisle — first as a participant and then as a media figure.

After his retirement from high school coaching, Jerome Vance Haney became a fixture on various Tulsa radio and television platforms. In addition to having co-hosted sports-talk shows with Bill Land and partnered with King on Cox cable’s presentation of hundreds of live events, Haney was the University of Tulsa’s football sideline reporter in 1994-2003 and the Golden Hurricane’s basketball analyst in 1994-2006.

“He was my colleague, my friend and in many ways my mentor,” longtime TU play-by-play voice Bruce Howard said of Haney. “He was a reminder that what we were covering was just a game, and his positivity was infectious. People may not remember what a good coach he was. It also made him a good analyst. He helped me see and understand the game.

“I would be spitting about an early 12-5 (basketball) deficit at the first commercial break, and he would comment, ‘No, we’re all right. (The opponent) won’t continue to shoot 7-of-7 from the field for the rest of the game, and TU is getting good shots.’ Sure enough, by halftime, Tulsa would have a 30-27 lead.”

“He was so enjoyable and fun to be around, and such a kind-hearted person,” Tomkalski said. “He made you feel at ease, no matter the situation, and his stories and experiences are legendary.

“We have lost an outstanding ambassador for sports in the state of Oklahoma.”

Haney was a Big Cabin native whose senior class had only 12 students. He played baseball at Northeastern Oklahoma A&M in Miami, graduated from Northeastern State in Tahlequah and flourished during a 30-year career of coaching Tulsa-area high school basketball (313 career victories), football, golf and baseball.

With the Owasso basketball program in 1964, Haney was the Tulsa World Coach of the Year.

During the ’80s, King says, Haney was an influential force in compelling Cox and various local stations to televise Tulsa-area prep football and basketball games.

“We would do 50 events each school year — football basketball, softball and baseball,” King recalled. “In 1988-92, we did dirt-track racing shows together in Owasso. I did play-by-play and J.V. did interviews with drivers and owners in the pits. J.V. was great at everything he did in any sport.”

Inspired by the prestigious Westminster Kennel Club Dog Show, Haney once persuaded Cox to televise a dog show from the Tulsa State Fairgrounds. This show, however, was a competition of mixed-breed mutts. As King and Haney anchored the coverage; the champion mutt received a year’s supply of dog food.

At KRMG in 1981, Land got Haney involved in everyday radio. For several years, Land and Haney co-hosted the “Tulsa World of Sports” cable show.

“It’s really hard for me to express how much J.V. has meant to me and my family,” said Land, now the television voice of the San Antonio Spurs. “He greatly impacted not just my life but (wife) Gayle and (sons) Taylor and Cooper.

“J.V. was so much more than a partner of mine on radio and TV shows. I could go to him as if he was my father. Many times, I treated him like an older brother, and he was always the best friend that anyone could ever ask for.

“I don’t think you can measure the number of people’s lives that he impacted in a positive way. It’s a sad, sad day that is only made better by knowing he is truly in a better place and at peace.”

Haney sustained his relationship with Northeastern A&M. He served on the school’s Development Foundation board of directors, was a commencement speaker and in 2002-10 was the chair of the Puddin’ Haney Classic NEO Alumni Golf Tournament.

Haney is survived by sons Mike and Pat. Haney’s wife, Kathy, died in 2021.

Howard described Haney as having been “an example of humble servanthood.”

“Not a month would go by without hearing about something J.V. did for someone else,” Howard said, “whether it was helping out an old coach or a former player, or organizing a charity golf tournament for some cause.

“The last few weeks and months, what he most often said was, ‘We sure had some fun.’ I won’t forget the priceless good times and the life lessons I learned from J.V. Haney.”

Guerin Emig: One player, one problem, one preposterous prediction and one pick for TU-Houston

Clayton Tune might have been snubbed by O'Brien Award committee, but he won't miss shot to feast on TU

Tulsa at Houston: Top storyline, key matchup, player to watch and who wins

With nothing left to play for but its pride, Tulsa has a chance to spoil the season for Houston.

TU closes out disappointing season on road at Houston

Saturday’s game will mark the end of TU’s season, the first time in three years that the Golden Hurricane will not play in a postseason bowl game.

TU soccer back in NCAA third round, hosting Creighton again

Tulsa (10-4-2), the No. 15 overall seed in the 48-team tournament, received a first-round bye, then advanced with a dramatic 1-0 overtime victory over Georgetown last Sunday at home.

University of Tulsa wide receiver Keylon Stokes ranks fourth in the nation with 1,177 yards and 14th with 69 receptions, along with seven touchdowns.

He wasn’t the first choice to be playing quarterback, but backup Braylon Braxton stepped into the lineup Friday night and delivered an outstan…

Jamari Smith had 19 points, Jacobi Wood flirted with a triple-double, and Murray State defeated Tulsa 77-60 in the third-place game of the Myrtle Beach Invitational.

Who has scored the most World Cup goals of all time?

Who has scored the most World Cup goals of all time?

Some prep coaches opt to pray, while others punt

Some prep coaches opt to pray, while others punt

Don King (left) and J.V. Haney are pictured during a 2002 Cox cable telecast. On Wednesday, Haney died at 89.