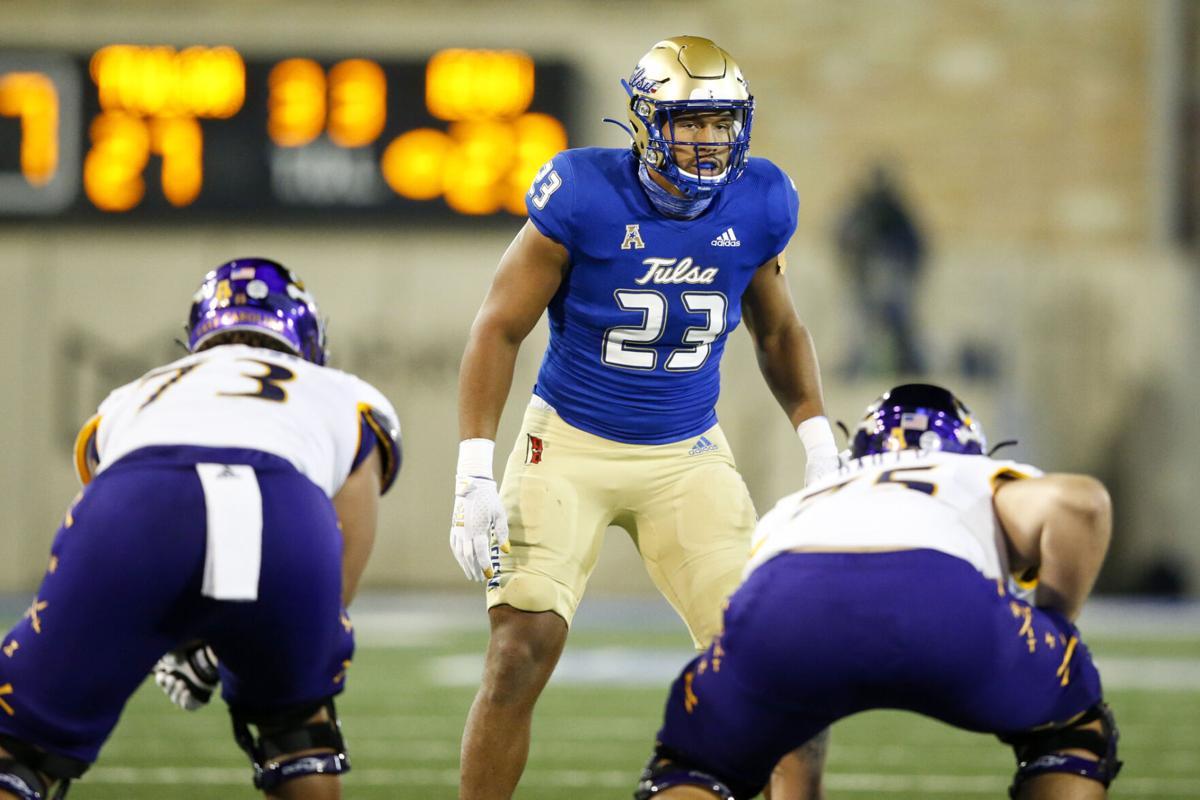 Former Tulsa linebacker Zaven Collins, seen here lining up for a play against East Carolina on Oct. 30 at Chapman Stadium, is projected as a likely first-round pick in the NFL draft, which begins Thursday. 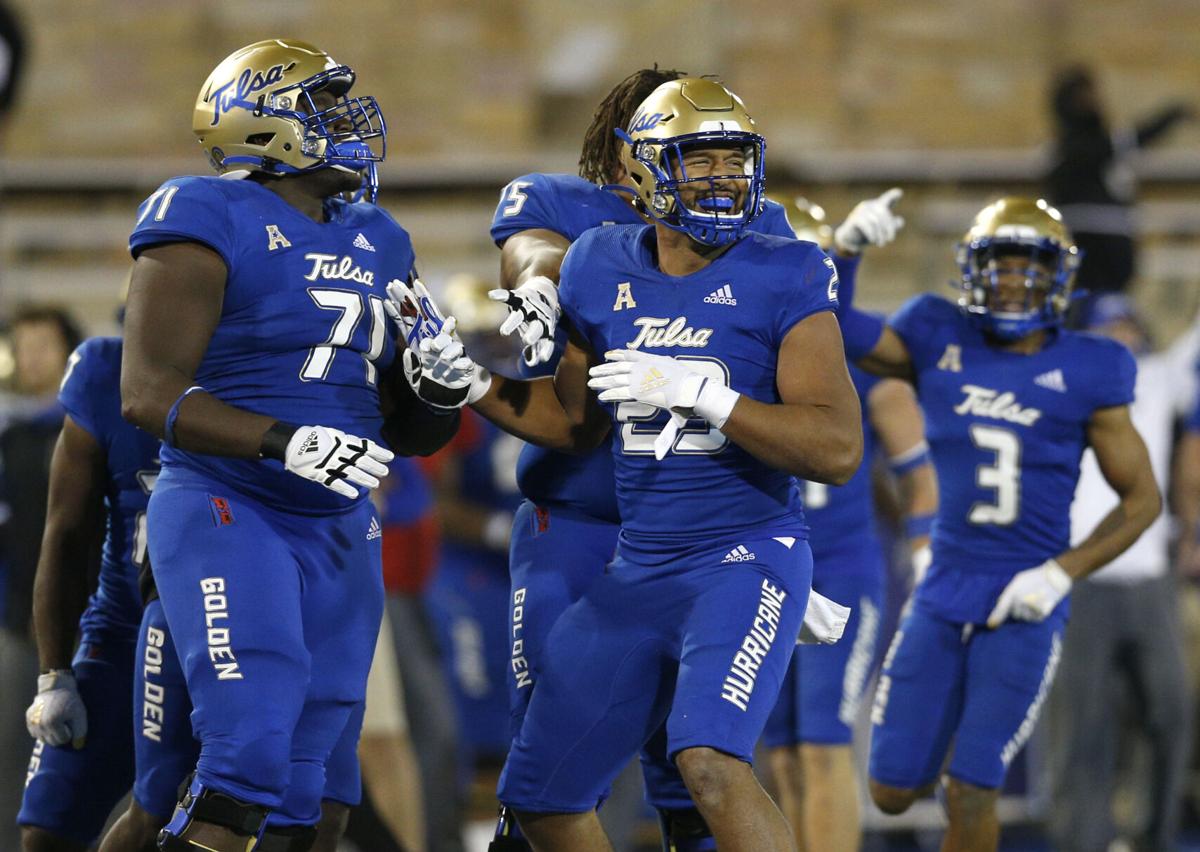 Tulsa’s Zaven Collins (front right), celebrates with teammates after his interception helped seal a win against SMU at Chapman Stadium on Nov. 14.

On his way to the NFL, Zaven Collins has been a vocal ambassador for the University of Tulsa.

“It’s time that we kind of made a statement for Tulsa and put them back on the map,” Collins said during a recent interview. “We’re blue-collar people. We like to go to work every day. We don’t like stuff handed to us. We work for what we’ve got. Every guy in the locker room is like that.

The Hurricane, after all, was the only Division I program willing to take a chance on Collins, an overlooked quarterback and safety out of nearby Hominy. His only other offer was from Division II Central Oklahoma.

“I had all the tangibles: My grades were high. I was valedictorian. I had a great ACT score. I had no off-field issues,” Collins said. “Everything was perfect. I played well enough. They just said my school was too small and my level of competition was not high enough to translate to the D1 level and they didn’t want to take a chance on a guy like me. I kind of told some of those people to p—- off.”

Motivated by the doubters, Collins became one of the best players in TU history and emerged as the top defensive player in college football last year, shining in the biggest moments to elevate his draft stock. Heading into the NFL draft that begins Thursday night, Collins is a projected first-round pick.

“Collins’ tape is fun to watch because he just wrecks plays,” ESPN analyst Mel Kiper Jr. said in his final prospect rankings, which include Collins at No. 34. “He has a rare blend of size and skills, and he could play any linebacker spot — maybe some defensive end, too — at the next level.”

According to Pro Football Talk, the Pittsburgh Steelers are eyeing Collins and Alabama running back Najee Harris at No. 24. An intriguing prospect because of his size, athleticism and versatility, Collins could go as high as No. 16 to the Arizona Cardinals.

Wherever he lands, Thursday night will launch the next chapter in Collins’ already incredible journey. In advance of his junior season, he thought he might have a chance to get drafted but worried about the effect COVID-19 might have on the season.

Unaffected by the explosion of publicity surrounding him, Collins kept plugging away with his workouts after deciding to leave early for the NFL. He has targeted goals for himself along the way, going from hoping to be drafted to wanting to be a top-20 pick.

“I’m sure some people would say I’m crazy, but it’s just something that I have to set for myself to keep me going, to keep me driven,” he said. “Same thing whenever I get to the NFL, whether I’m drafted 250th or No. 50 or No. 15. I don’t know yet what it’s going to be, but I can tell you that I’ve just got to keep setting goals for myself to help me succeed.”

Collins has been true to himself throughout the draft process, not apologizing for his small-town background. Rather than attend the draft, he opted for a low-key gathering in Tulsa with no media in attendance.

“I like to be outdoors, enjoy family and friends, (go to) church on Sundays,” he said. “That’s basically who I am. I’ve been raised that way my entire life and I really don’t plan on changing.”

Throughout his countless interviews with NFL teams and various media in recent months, Collins has credited his TU coaches and teammates for their roles in his development, continuing to put the Hurricane program in a positive light after his departure.

“The amount of exposure that our program has gotten but maybe even more importantly that our university has gotten that Zaven has brought to the table, that didn’t cost anything,” TU coach Philip Montgomery said. “I think we all should be very thankful for the way it’s played out and obviously Zaven is going to be an ambassador for us and for this university for many years to come. We’re all rooting for him and feel really good about where he’s headed.”

Former Tulsa linebacker Zaven Collins, seen here lining up for a play against East Carolina on Oct. 30 at Chapman Stadium, is projected as a likely first-round pick in the NFL draft, which begins Thursday.

Tulsa’s Zaven Collins (front right), celebrates with teammates after his interception helped seal a win against SMU at Chapman Stadium on Nov. 14.