Guerin Emig: We didn't listen to TU football player Keanu Hill when he took a knee in protest four years ago. We damn sure need to hear him now
Share this
Return to homepage × 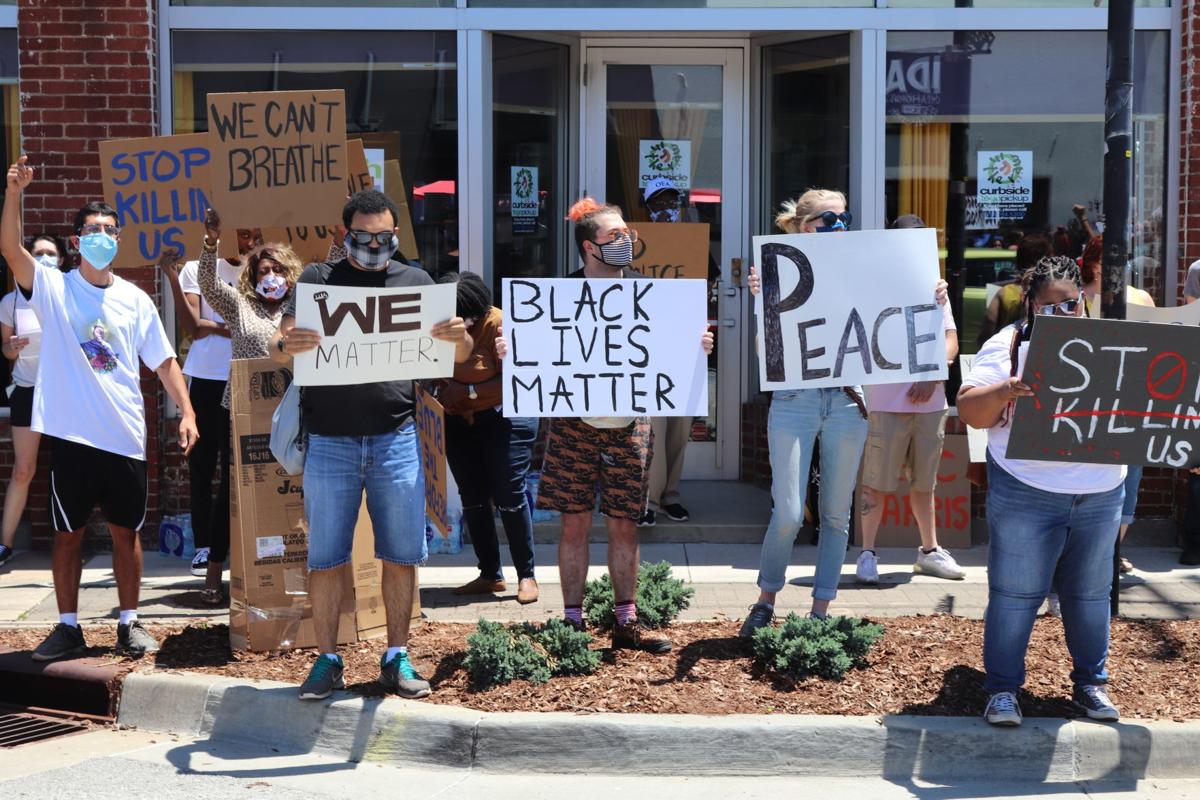 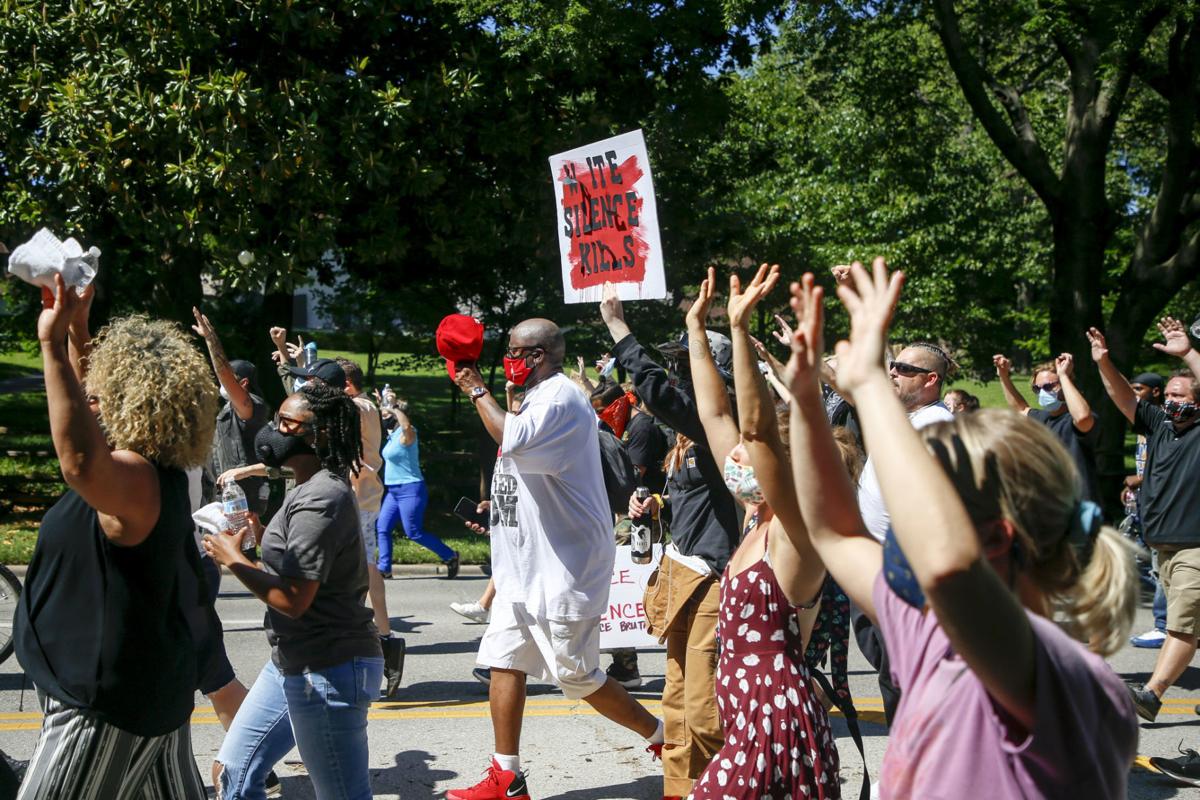 Protesters march down 41st Street toward Peoria Avenue during a march on Saturday following the death of George Floyd in Minneapolis earlier in the week. IAN MAULE/Tulsa World 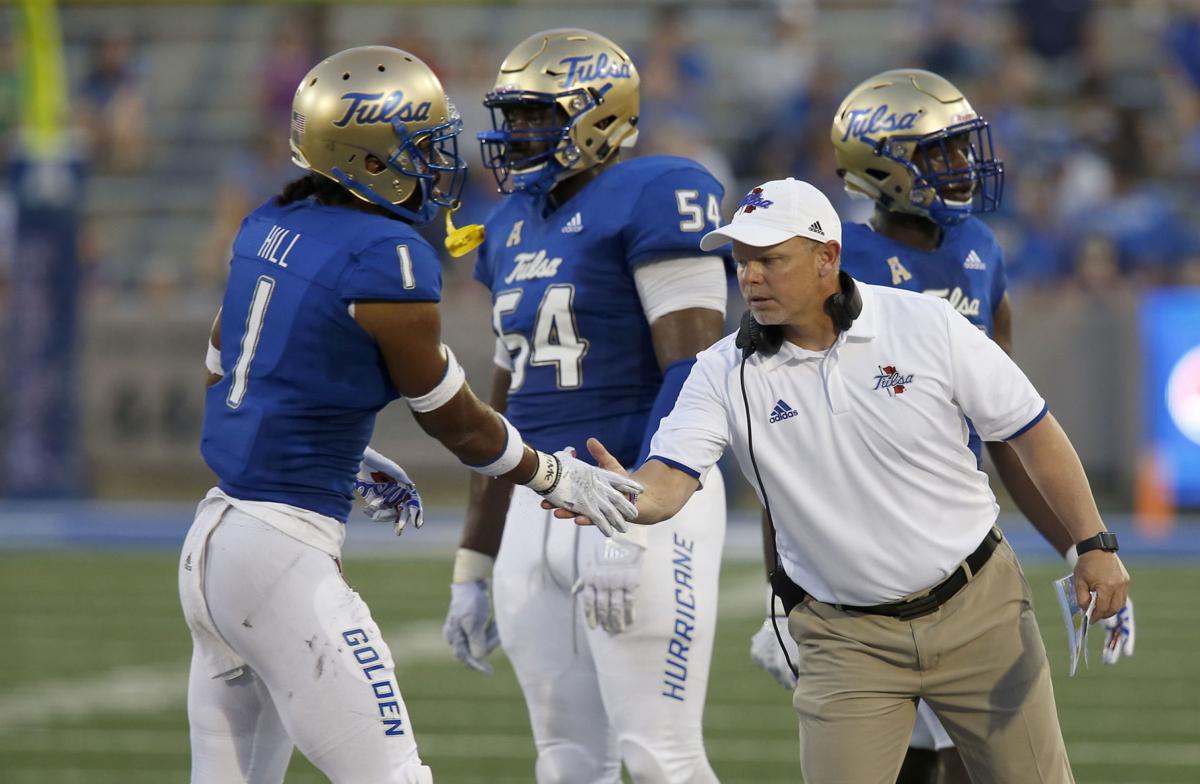 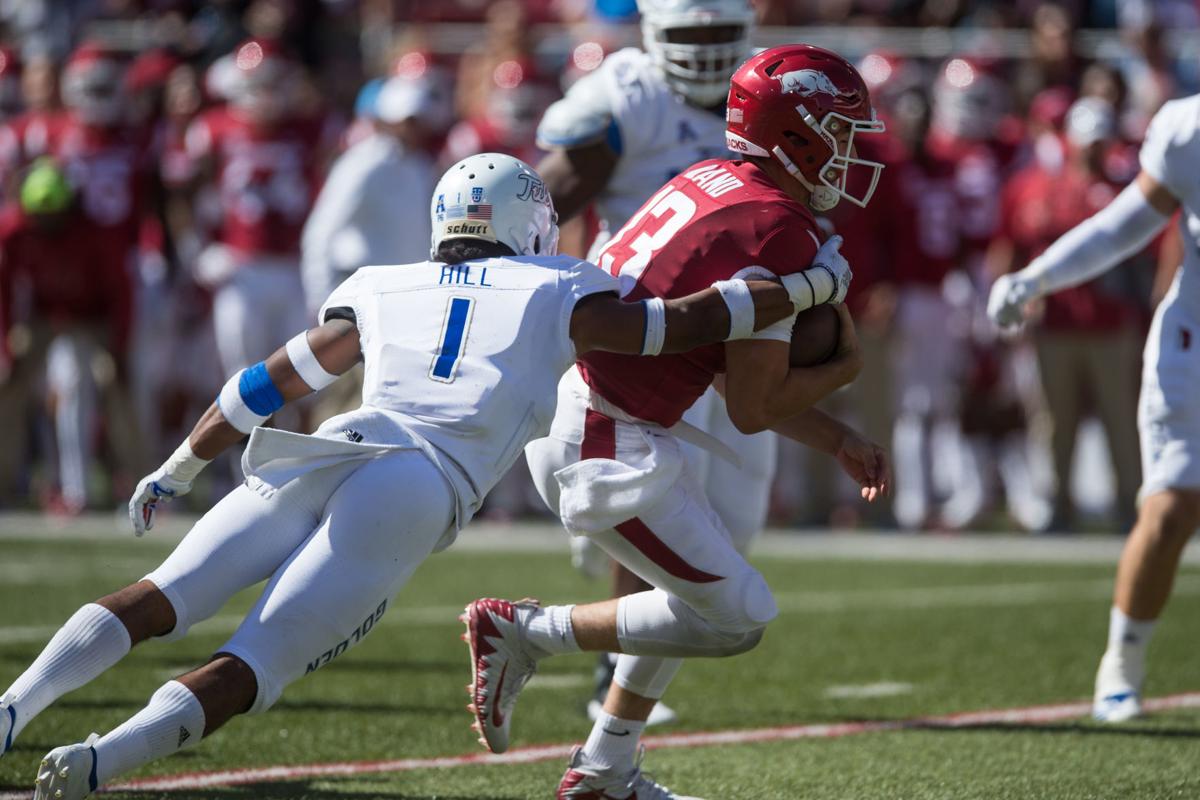 Keanu Hill knelt on the turf during the national anthem before Tulsa’s football game at Ohio State on Sept. 10, 2016. That’s all we knew then and all we know now, and we should feel awful about that as we consider George Floyd’s death and black America’s despair and rage.

Hill, then a 22-year-old TU cornerback, was trying to tell us something, same as other football players following Colin Kaepernick’s lead by dropping to a knee to protest police brutality against Americans of color and systemic racism that fosters such despicable behavior.

A first step toward correcting that, in the aftermath of what happened to Floyd and what is happening in cities across our country in response, is to listen now.

“That was the only time in my Tulsa career that I was on the field for the national anthem,” Hill says by phone from Los Angeles, where he is pursuing a career as a firefighter. “This was the same year that Kaepernick was doing his silent protest. I didn’t even think about it. It was never a planned notion. It was never ‘I’m about to take a knee during the national anthem.’

“We were doing our team prayer and once everybody was done praying, they stood up. I was continuing to pray and I heard the national anthem start. That’s when I decided. It was very instinctual of me to stay on my knee.”

Why was it instinctual?

“I come from L.A.,” Hill says. “I’ve experienced police brutality. I’ve watched it. I’ve been through it. I’ve been pulled out of cars for no reason on my block. I’ve been surrounded by over 10 cops with over eight cop cars just because I’m sitting outside a car with four of my friends. We were simply sitting there. They got a call saying there were four black males who looked sketchy, so they pulled us out of our car and threw us on the ground. That’s pretty normal where I come from.”

There is more to Hill’s perspective. His mother, who raised him in a single-parent household, is Samoan. His aunt has Caucasian and Hispanic ethnicity.

“So I’ve seen both sides of the spectrum,” Hill says. “I was pretty aware of how white and black people lived. That was a blessing.”

It opened his mind wider to the world, its prejudices included. If his action at Ohio State was instinctual, so was his reaction to the discord it caused.

He says TU staff worried he had painted the program in a controversial light, and that there might be financial repercussions if ticket buyers made good on threats to pull their support as a result of the protest.

He remembers the statement TU issued in response, reading in part: “A university setting is a place of free expression and open discussion of differing perspectives and opinions. However, the actions of one do not speak for an entire group and — in this instance — not for University of Tulsa athletics.”

He says his mom worried he had jeopardized his safety in Tulsa and his future in football by taking a knee.

“‘If I can use my platform to speak up, that’s definitely what I’m going to do.’”

Hill looks back on his use of his platform with some positive feelings. He remembers a white teammate approaching after the fact and saying something to the effect of “Bro, I wish you would have told me. I would have taken a knee with you.”

There were enlightening conversations with other teammates and some professors. There was assistant coach Dan Bitson’s effort to get Hill and other African-American TU players in front of kids in north Tulsa elementary schools. Hill says he met Crutcher’s nephew at Hawthorne that way.

There was the night Hill joined a group for a bite at a Tulsa Buffalo Wild Wings.

“A waiter came by and gave me a note,” Hill recalls. “It said, ‘Thank you for being the hero that you are. We need more people like you in this community. Continue to be you. Peace and blessings.’”

Mostly, though, there is regret four years later. Because here we are again.

“What we did wasn’t enough. It obviously didn’t change anything,” Hill says. “I guess it made it more open for people to talk about. But what is talking without action? As far as George Floyd, my condolences go out to his family and to every other family who has lost someone to police brutality. But to this point, I’m numb to it.”

He sounds distraught more than anything. It’s heartbreaking.

Hill wants badly for America to permanently latch on to the issues in play here, and not make them a cause du jour. He has seen where that hasn’t occurred, though.

“Since we took a knee four years ago, what has really happened since then?” he says. “Significant people and role models and people we look up to, when we see them talk about it, we see the NBA come out with their ‘I Can’t Breathe’ shirts (in 2014 to signify Eric Garner’s death after police put the African-American in a chokehold). OK, that came and went. Hashtag Black Lives Matter came and went. Martin Luther King Jr. came and went. Malcolm X came and went. Muhammad Ali came and went. It’s going to continue to come and go sadly.”

Hill, for his part in the narrative, wouldn’t mind a do-over. He was given a platform. He did use it in a prominent setting. He’s just upset he didn’t see it all the way through.

There was a team meeting where he explained why he took a knee.

“I don’t think I apologized. I might have,” Hill says. “Even now when I think about it, it’s pretty sickening.”

He believes he should have pushed harder. He wishes he would have challenged his coaches stronger, although he does recall referring head coach Philip Montgomery to a book by noted black writer Ta-Nehisi Coates.

“‘Between the World and Me,’” Hill says. “I was really big into reading.”

As such, Hill educated himself on Tulsa’s toxic racial history, the city’s Race Massacre. He couldn’t believe that subject wasn’t taught in Tulsa schools.

Hill had so much trouble on his mind. He says he tried to compartmentalize that trouble for the sake of his surging team — TU finished 10-3 in 2016.

Now there is so much more trouble. It’s hard to know exactly what to think or do about it.

My inclination is to call Hill. He tells me he appreciates my effort.

He also sends a bull’s eye into white America’s sympathetic but uninformed heart.

“I feel like because you guys don’t live and experience it, it’s going to just come and go,” he says. “Trayvon Martin, Ahmaud Arbery, George Floyd ...”

Terence Crutcher ... not one week after Hill took a knee.

He went pretty far. A 22-year-old college football player taking a knee in front of 104,410 fans? That shows more conviction than we ever had at that age, and likely most of us ever will have.

In retrospect, the mistake was ours, not his. We didn’t receive the message.

Well, at least we can start here. We can give Hill the attention he deserved four years ago.

Jerry Ostroski has more friends in this city than TU has students, so the signing of Owen Ostroski would have been a popular, natural, common-sense play for the Hurricane.

Despite playing in less than three quarters before leaving with severe cramping, Collins totaled six tackles including four for lost yardage and three sacks.

Bill Haisten: As there were 15 penalties at OSU, a lingering TU issue is ‘getting hard to watch’

So far this season, TU is the only team in the country with as many as 15 penalties in a single game.

In Saturday’s 16-7 defeat to No. 11 Oklahoma State, the Hurricane went 0-for-11 on third down, had 15 penalties, including one that negated a touchdown, missed a field goal and got another taken off the board because of an ill-timed timeout.

In the 16-7 loss, TU displayed a stunning amount of ineptitude and ineffectiveness, totaling 15 penalties for 120 yards and going 0-for-12 on third downs.

Yohance Burnett, who would have started at middle linebacker for Tulsa, also is out for the year with a torn ACL.

Bill Haisten: In interim AD process, the circumstances of 2020 double the pressure on TU to get it right

At Boone Pickens Stadium, one luxury suite is reserved for the visiting athletic director and guests. On behalf of TU, who occupies that suite on Saturday?

Yohance Burnett, who would have started at middle linebacker for Tulsa, also is out for the year with a torn ACL.

TU at No. 11 OSU: After delays, Hurricane ready to open season

When a season that hung in the balance and was twice delayed finally gets underway, the University of Tulsa won’t be satisfied simply to take the field.

Protesters march down 41st Street toward Peoria Avenue during a march on Saturday following the death of George Floyd in Minneapolis earlier in the week. IAN MAULE/Tulsa World 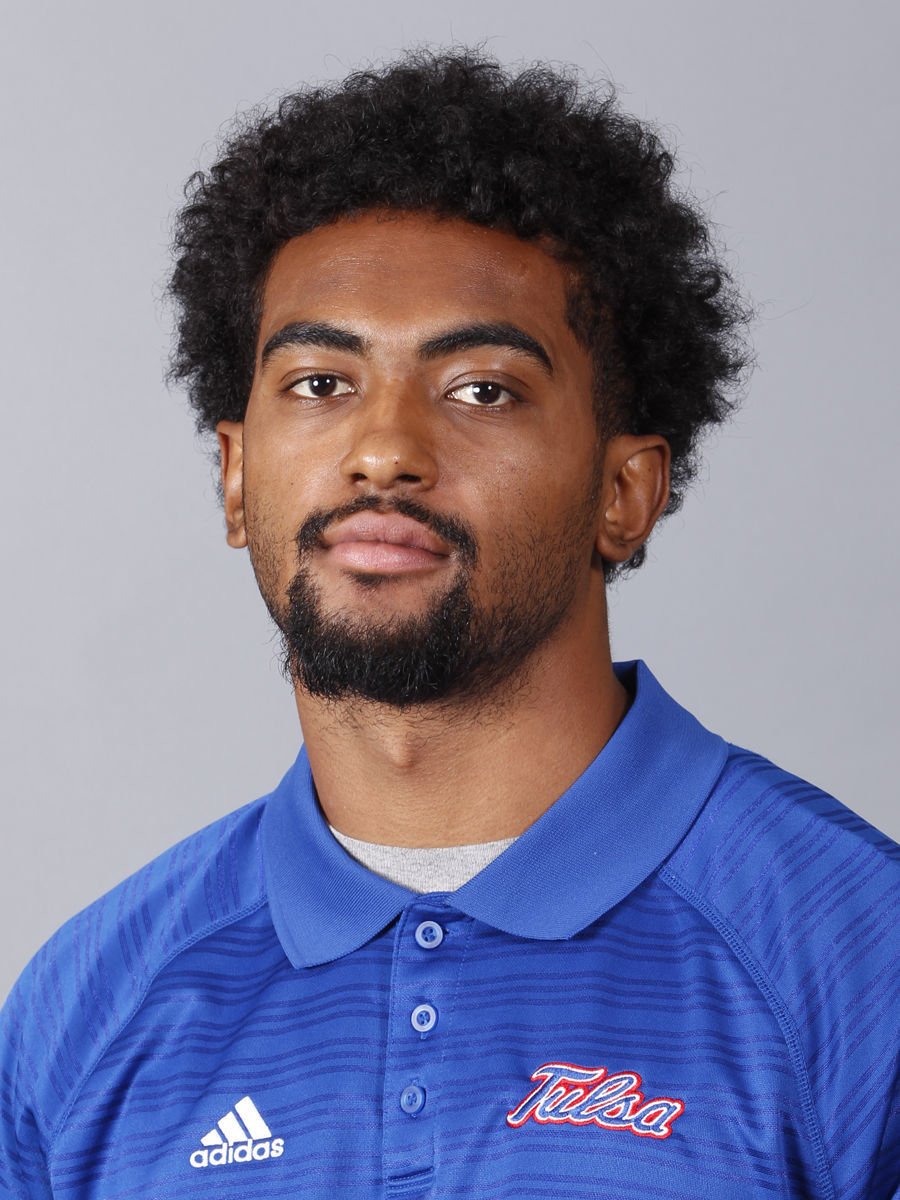