Guerin Emig: 'I've been able to be with my guys' -- college coaches as impassioned to play on as their players
0 Comments
Share this
{{featured_button_text}}
1 of 2 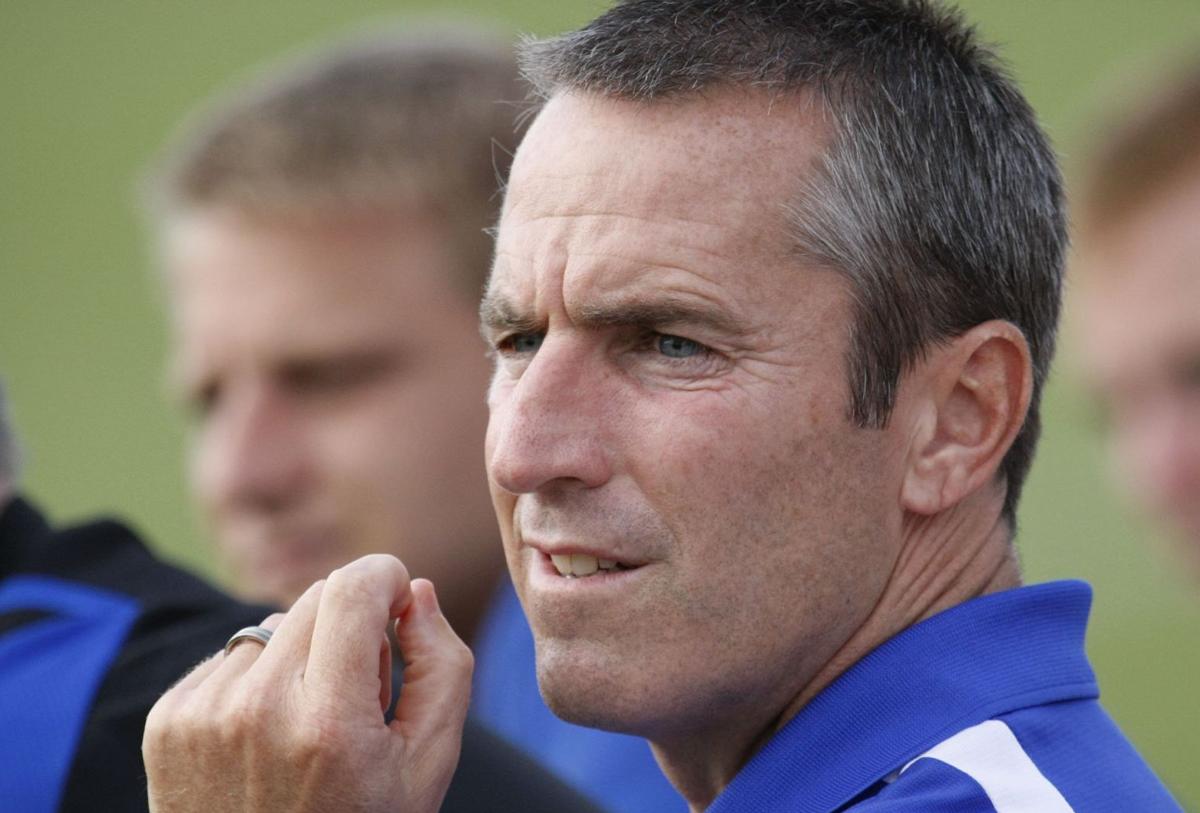 TU men’s soccer coach Tom McIntosh says it’s been great getting back with his players after being away from each other because of the COVID-19 pandemic. Tulsa World file 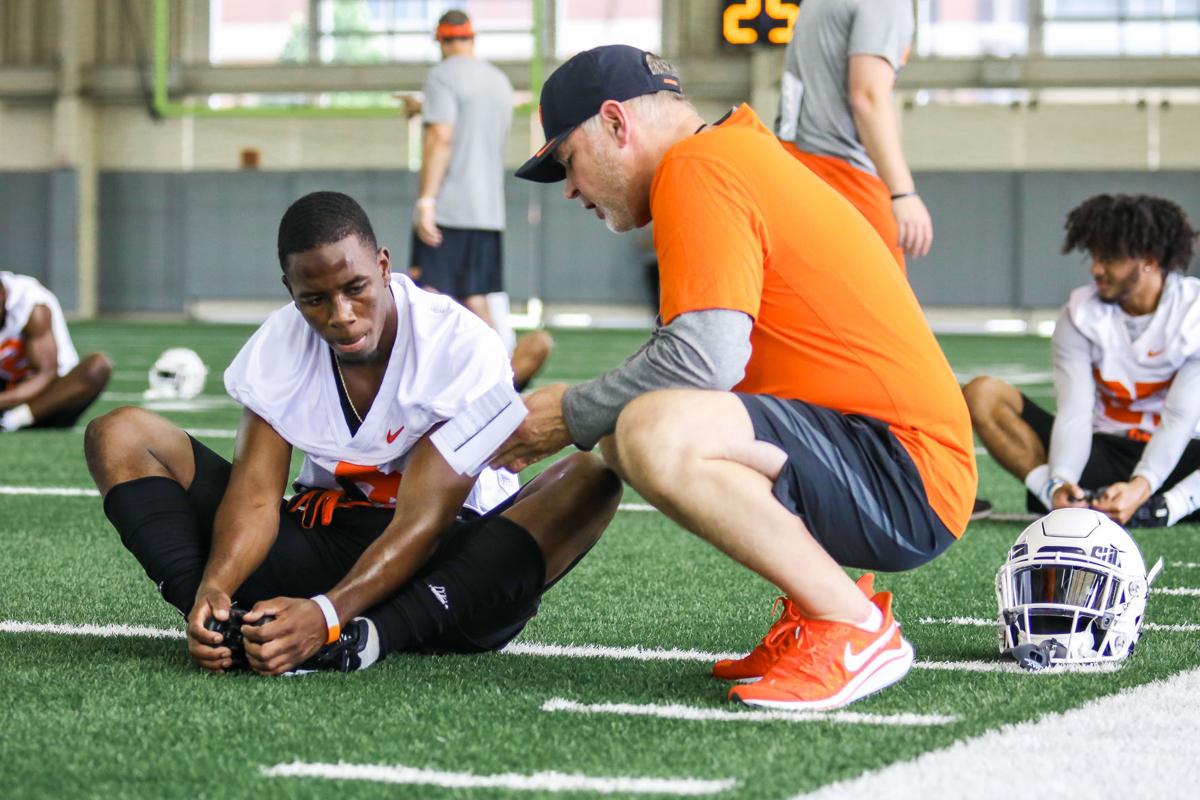 When asked how the past five months have been for him, OSU assistant Jim Knowles (right) says, “I appreciate the question because most people think we’re robots.” Tulsa World file

Tom McIntosh was talking about the challenges of coaching the University of Tulsa men’s soccer team through the pandemic the other day when his blue eyes peeking out over his neck gaiter suddenly glistened.

“Yeah ... I don’t mean to get emotional about it but ... to me ... you love your athletes,” McIntosh said through a few quick breaths. “When I see them every day and I get to look in their eyes? I know what they feel. Right? I want ... I want what’s best for them.

“We have to make sure that we’re all looking in the eyes of our athletes and saying, ‘I’m trying to do what’s best for you.’ ”

As we weigh the athletes’ desire to play through this mess, whether due to their passion for their sport and team or for their mental health or for their physical wellness under university supervision, McIntosh’s emotional reckoning reminds us the stakes are awfully high for coaches, as well. And not just because they are the ones getting paid, the ones whose livelihoods are on the line.

Coaches feel the brunt of the pandemic, too. I mean, literally feel it.

Last week when I asked Oklahoma State defensive coordinator Jim Knowles how he had managed the past five months, he said: “Coaches are people, too. If you cut us, do we not bleed? I appreciate the question because most people think we’re robots.”

The day before, OSU offensive coordinator Kasey Dunn said he was so happy to see students strolling the campus again that he spontaneously called his wife.

“This is nice,” Dunn told media during his Zoom call. “This is what you sign up for.”

Over at Oklahoma, Sooners defensive coordinator Alex Grinch said: “Not to sound too euphoric about it, but just the sheer joy of players and coaches alike going back a couple weeks. There is a reason why you chose to be a football coach, to actually be on the field with the guys and coaching the game.”

Is it right that coaches are on the field with their guys again? That’s open to interpretation depending on how doctors and scientists analyze what data.

Is it right that coaches are as happy as they’ve been in years to be with their guys again? Is it OK that they worry about the countless offshoots of COVID-19 while still cherishing every day they are allowed to practice?

Hell, yes. This is closed to interpretation, unless you believe Knowles and his like really are androids.

“It’s the environment you grew up in,” said McIntosh, the 26-year Golden Hurricane coach. “I mean, these last seven days have been some of the best seven days I’ve had in the last five months. Because I’ve been able to be with my guys. That’s important for coaches.”

You think players are the only ones whose mentalities have been endangered since March? You think they alone benefit from structure and camaraderie?

Last May, as coaches started seeing timelines for players returning to campus, TU football coach Philip Montgomery was asked how he might feel seeing his kids return.

“I probably will get no sleep the night before,” he said. “Kind of like right before Christmas as a little kid: If I go to sleep, is it going to come faster?”

There are financial, budgetary aspects to college athletics’ pandemic crisis. But does Montgomery sound like an automaton consumed with what’s at stake professionally?

McIntosh, for his part, has taken a voluntary pay cut. He has had to reconsider his budget.

“They (TU administrators) asked, ‘Are there avenues you can cut that don’t really affect the experience for your student-athletes as much?’ ” he said.

McIntosh is following football’s progress, football being the budgetary bar-setter at TU and just about everywhere else in Division I sports. He is following cuts that Division I programs have already made, sports that have been discontinued, men’s soccer included.

“Obviously there is concern,” he said. “Cincinnati dropped their soccer program. They were in our conference.”

McIntosh soon won’t have an athletic director with Derrick Gragg’s impending departure for an NCAA position. He is down a player who decided to opt out this season. He is down half of his schedule as TU hopes to play conference-only games.

He has NCAA, American Athletic Conference and university decisions pertaining to issues ranging from testing protocol to player eligibility to the possibility that fall sports might yet be postponed into the spring or gosh knows when.

We have come to understand the burden of all of this crashing down on players’ psyches as they attempt to play. We have come to realize that the overriding reason they continue to push forward is they really, really want to do so.

It is the same for coaches who love their players as much as the players love their teammates. And while that isn’t enough to justify playing on if consulting doctors and scientists determine that playing on isn’t safe, it is worth recognizing.

It is worth appreciating.

“Yeah, it’s been tough,” McIntosh said. “But right now we’re doing what we love to do. It’s all part of getting an education. The education process isn’t just in the classroom. That can be for any student.

TU men’s soccer coach Tom McIntosh says it’s been great getting back with his players after being away from each other because of the COVID-19 pandemic. Tulsa World file

When asked how the past five months have been for him, OSU assistant Jim Knowles (right) says, “I appreciate the question because most people think we’re robots.” Tulsa World file