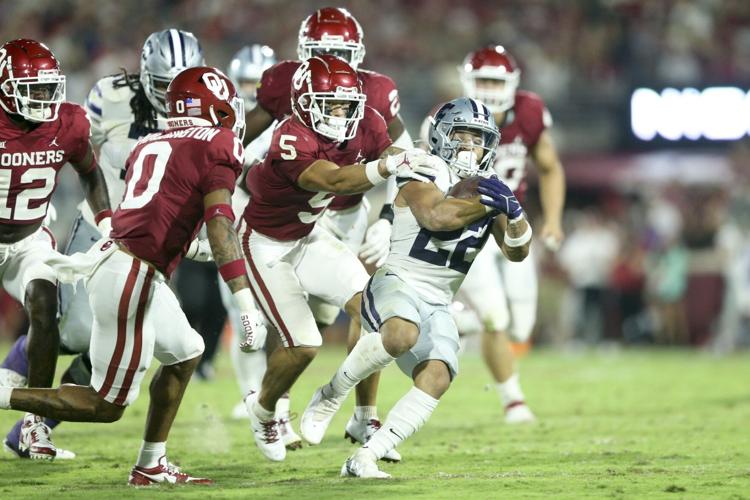 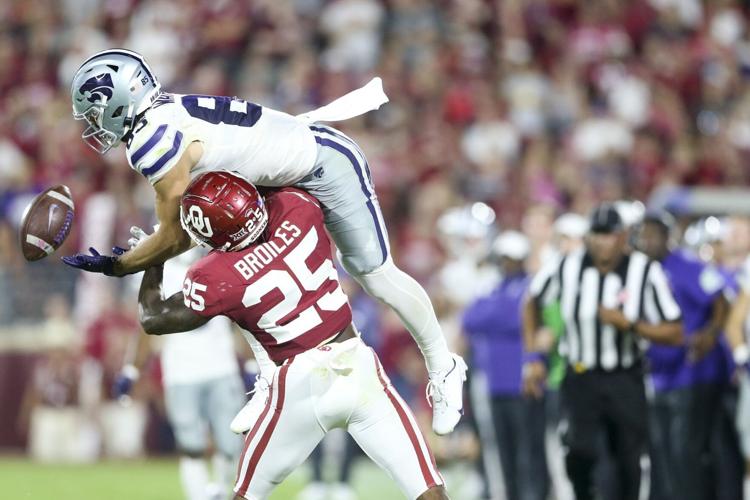 Kansas State wide receiver Kade Warner attempts to catch a pass while defended by Oklahoma defensive back Justin Broiles during Saturday's game at Gaylord Family Memorial Stadium in Norman. Broiles was called for pass interference on the play. 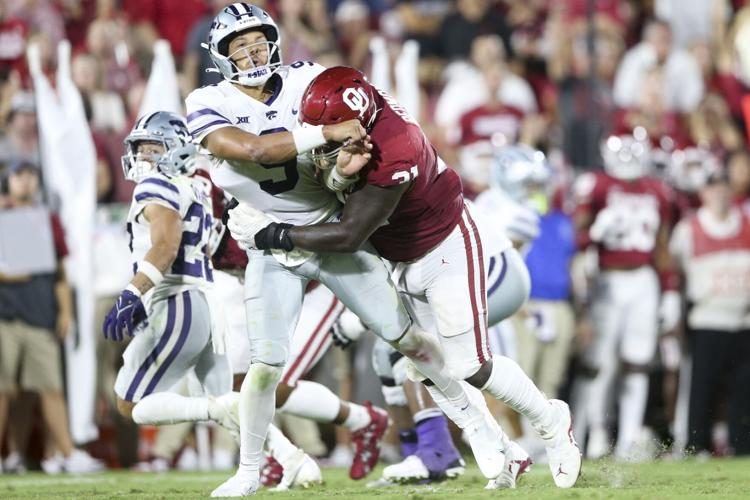 NORMAN — Only moments removed from the sideline at Owen Field, still basking in the glow of the first win of his head coaching career on Sept. 3, Brent Venables was already preparing to turn the page.

“I want them to enjoy this one,” the Oklahoma coach said of his players following the Sooners’ 45-13 win over UTEP. “But on Monday, we’re gonna strip this thing back down to the studs and start over again.”

No different this week, No. 18-ranked OU — and its defense, in particular — is stripping it down once again as the Sooners return to their feet from a 41-34 defeat to Kansas State, the program’s first loss under Venables and perhaps its most significant setback since Lincoln Riley left for USC last November.

As coordinator Ted Roof highlighted Monday, OU’s defense lost the physical battle, struggled to tackle and lacked for third-down stops in the Wildcats’ visit for the 2022 conference opener. In Norman on Saturday night, that paved the way for Adrian Martinez’s five-touchdown performance, 275 rushing Kansas State rushing yards and the Wildcats’ third win in four tries against the Sooners.

Now 3-1 entering Week 5, OU is hitting the reset button and working to strike the balance between what has been and what lies ahead with a trip to unbeaten TCU waiting for the Sooners on Saturday morning.

“You start completely over every single week,” Venables said Tuesday. “That’s the way that I know how to do it and has proven over time that that’s the right way. You learn from your past. That’s how you grow and improve. This is the greatest opportunity to teach and lead is right now, through a loss. I know that without question.”

So, following a trio of impressive defensive performances to open the season, what went wrong for the Sooners in Week 4?

After the loss on Saturday, linebacker DaShaun White mentioned a Tuesday that practice that “wasn’t a great;” Roof on Monday acknowledged the sluggish session, too, and said the defense “picked it up” in the days that followed. In the days since the defeat, both defensive end Reggie Grimes and tight end Brayden Willis — the former speaking to reporters Monday night and the latter on the “Podcast on the Prairie” — referenced the “rat poison” of media attention seeping in following the Sooners’ unbeaten start.

But both White and Roof honed in more on OU’s lack of execution in tackling, alignments and physical play. Venables’ brought a similar focus to his diagnosis Tuesday.

“What I saw was guys afraid to make mistakes,” he said. “We played on our heels. We weren’t physical at the point of attack. We haven’t been that way. That’s what I saw. I saw guys pressing; trying to do a little bit too much.”

As for those other factors?

“I don’t know about rat poison,” he said. “Interesting term. Handling success is a very difficult thing for everybody. I’ve always taken tremendous pride in being the anti-success, patting everybody on the back. We worked hard at that last week. I’m not sure if whether or not that had anything to do with it or not.

“That’s not what I saw on the field.”

For the Sooners, there’s only so much time to harp on the Week 4 showing before they meet their next test. In search of a bounce back, OU’s defense runs into a TCU attack on Saturday that is averaging 510 yards and 46.3 points across three wins to open the season.

On Monday, the Sooners opened the critical game week with a sharp practice.

“It was focused intensity,” explained Grimes, the Sooners’ sack leader. “It was a lot more technical, a lot more detail-oriented than we have been on Mondays. That was important. Because obviously, if you watch the game, the little things are what beat us.”

And multiple OU defenders noted the difference in reaction to this loss under the new coaching staff compared with others under the previous regime in Norman. Rather than focusing on all that went wrong in Week 4, Grimes said, the emphasis this week has been on pulling the good from the bad.

Another wrinkle: defense-wide film sessions over film study broken down by position group.

For the first time under Venables, OU has a loss and a setback to respond to. In Week 5 at TCU, that response will be tested quickly.

The Oklahoma Sooners are on the road again, and coming of the first loss of the season. Here's all of our TCU week pregame coverage.

Tom Brady reveals the reason he hates the 49ers

The potentially legendary outcomes of the World Cup

The potentially legendary outcomes of the World Cup

The craziness of the 1930 World Cup

The craziness of the 1930 World Cup

Five players who have played at five World Cups

Five players who have played at five World Cups

Kansas State wide receiver Kade Warner attempts to catch a pass while defended by Oklahoma defensive back Justin Broiles during Saturday's game at Gaylord Family Memorial Stadium in Norman. Broiles was called for pass interference on the play.