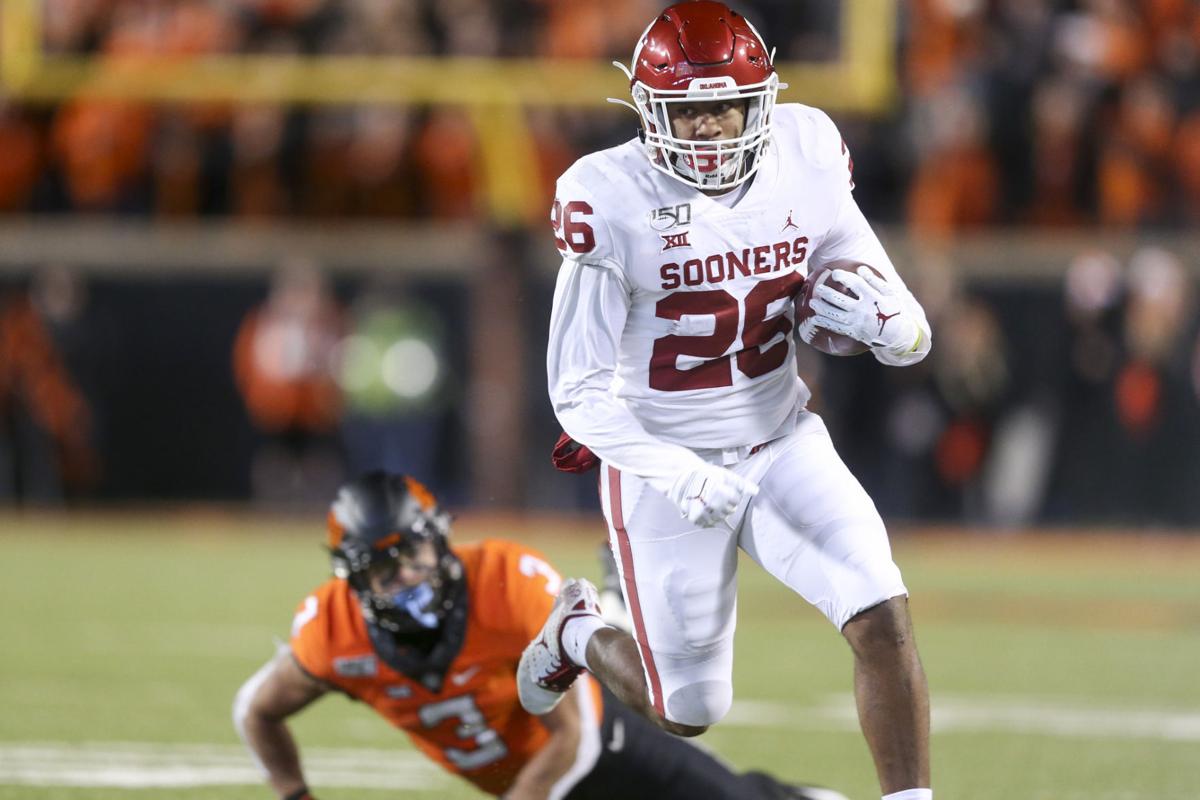 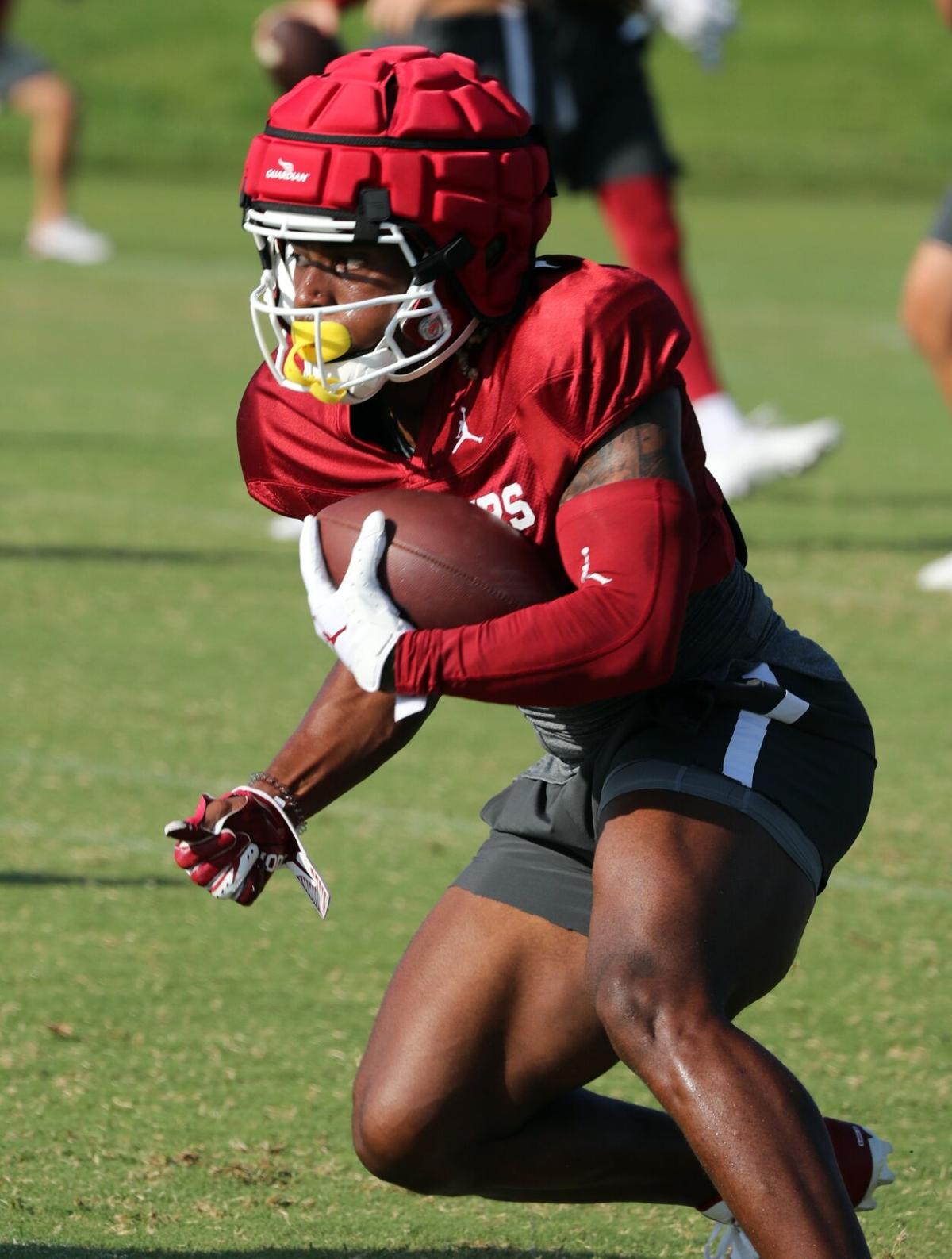 Eric Gray is one of only two scholarship running backs remaining on Oklahoma’s roster entering the 2021 season.

NORMAN — Lincoln Riley doesn’t make many mistakes when recruiting for his prolific offense. A trophy case that includes Heisman and Big 12 hardware reflects that.

Running back Tre Bradford — who left LSU to join Oklahoma during the summer and was elevated to a third-team spot after continued attrition at the position — left the program last week and surfaced in the transfer portal on Monday. Is “abandoned” too harsh a word for his abrupt decision? Maybe not for Sooner Nation.

Riley can’t afford to dwell too much on Bradford’s choice, but it does impact the game plan heading not only into Saturday’s 11 a.m. season opener against Tulane but also the 2021 campaign.

“It was a strange situation. It’s part of the deal with the transfer portal. And then even in a COVID year, you’re bringing in some people that you flat out know less about,” Riley said during Tuesday’s news conference. “Do all the homework you want, you just don’t know. I will say up to this point the transfers we’ve brought in, the majority has been fabulous. Excited to see them play on Saturdays this fall, but within our program, buying into our culture, being good teammates, these guys by and large have exceeded our expectations.

“But on (Bradford), we swung and we obviously missed and we made a mistake.”

Before spring football, no one could have predicted that Seth McGowan and Mikey Henderson, who was moving to running back, would be dismissed from the program. Last week, it was learned Marcus Major, a third running back, will miss the fall due to academic issues.

And now there are only two scholarship running backs — Kennedy Brooks and Eric Gray. Both are experienced, but didn’t play a snap at OU last season. Brooks opted out after back-to-back 1,000-yard rushing seasons, while Gray transferred from Tennessee.

It is a good time for Oklahoma fans to get familiar with the names Jaden Knowles and Todd Hudson, two walk-ons who could see more-than-expected work at running back.

Riley said he expected Gray and Brooks to get more work than usual. Think back to the Samaje Perine and Joe Mixon days.

The fifth-year Oklahoma coach hinted that other skill players could play running back in a pinch, but the season will start with this quartet.

“We’re not going to jump the gun here. We may look at a few guys here early, see what they do, look at a few guys behind the scenes,” Riley said. “But I would say right now, obviously if we have injuries and lose other people, we’ll have to adjust, but we feel pretty good with those four guys right now going in.”

Gray was expecting to take a large role in the OU offense, but that will be expanded even more.

He also shared a little about Knowles and Hudson. Some fans know about Knowles’ love for meteorology, and his teammates have nicknamed him “the weatherman”. But not many know about Hudson’s desire to be a pilot.

Gray’s looking forward to the pair making an impact this season.

“Both of them have done a great job all camp, learning, getting ready for this situation, getting ready for this opportunity for them. This is an unbelievable opportunity for both of those guys,” Gray said. “They are very good runners. They are very hard workers. They try to learn all the time. They’re asking me all the time, ‘So what do we have on this? What if this happens? What if this happens?’ So they’re soaking up a lot of knowledge and they’re doing a great job.”

Bradford’s loss will be a learning experience for Riley and his staff.

The coach mentioned there have been success stories within the transfer portal as recent as this year with Tennessee transfers Wanya Morris and Key Lawrence, who were recruited out of high school and circled back to OU.

Oklahoma’s recruiters built a relationship with those two.

“You’re not going to hit on every single one. You look at the whole group of transfers that we brought in, from buy-in and culture guys and guys doing the right thing, we’ve added a tremendous percentage,” Riley said. “But we missed on this one. We just we flat out did. And so you’re going to continue to go back, learn, evolve your processes, keep trying to figure out, like we would in any situation, whether it was a transfer, high school recruit, if we did miss, why did we miss? What did we miss? Could we have seen that?

College football is finally here. In Norman, there's national title aspirations with a potential Heisman Trophy candidate at quarterback and an emerging defense under Alex Grinch. In Stillwater, hopes are high with a veteran returning at quarterback to go along with one of the Big 12's top defenses. At Tulsa, an abundance of depth might help the Hurricane get over losing one of the best players in college football last season and there's excitement over the return of a talented running back.

Tulsa kicks off its season at 6:30 p.m. hosting UC Davis while Oklahoma State and Oklahoma begin their seasons Saturday.

Scroll below for all of our 2021 College Football Preview stories, as well as videos on TU, OSU and OU. You can also pick up a copy of the 2021 preview in the Sunday Tulsa World.

We are sure to enjoy this fall more than the 2020 belly flop, provided everyone takes care to help keep each other healthy

There are national-title aspirations for the Sooners and while OU is loaded at many positions, there are some questions

Athletes turning to companies such as MAGZ Sports for NIL help

In a new age where the select few are partnering with professional agencies for NIL guidance, such as Oklahoma quarterback Spencer Rattler, and others are fending for themselves, MAGZ and companies like it around the country offer a middle ground.

With the season almost here, what type of success can fans expect from OSU and who are the players to watch?

The rule change that took effect July 1 prompted QuikTrip to tweet a few days later: “College athletes who love QT hit us up.”

With Zach Smith opting to pursue professional football, the quarterback reins have been handed to Davis Brin, a fourth-year junior who orchestrated the rally against Tulane last year.

Zaven Collins is gone, but this team has depth and swagger and Shamari Brooks poised for special season.

Will Oklahoma win its seventh consecutive Big 12 championship? Or will upstart Iowa State try to shake things up?

Despite the departures of three valuable defensive starters, the 2020 runners-up have more depth than in Philip Montgomery's previous six seasons. With Davis Brin at QB, the offense should be more productive.

Tulane at No. 2 Oklahoma

There are national-title aspirations for the Sooners and while OU is loaded at many positions, there are some questions

Eric Gray is one of only two scholarship running backs remaining on Oklahoma’s roster entering the 2021 season.