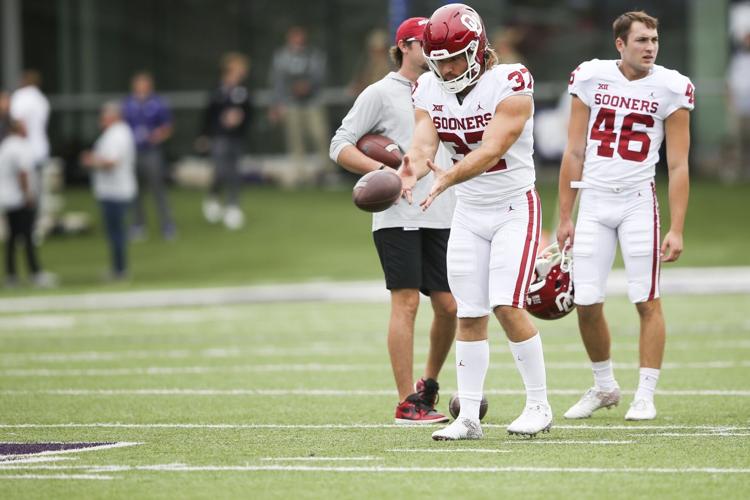 Oklahoma punter Michael Turk (37) warms up before a NCAA football game between Oklahoma and Kansas State in Manhattan, Kansas on Saturday, Oct. 2, 2021. 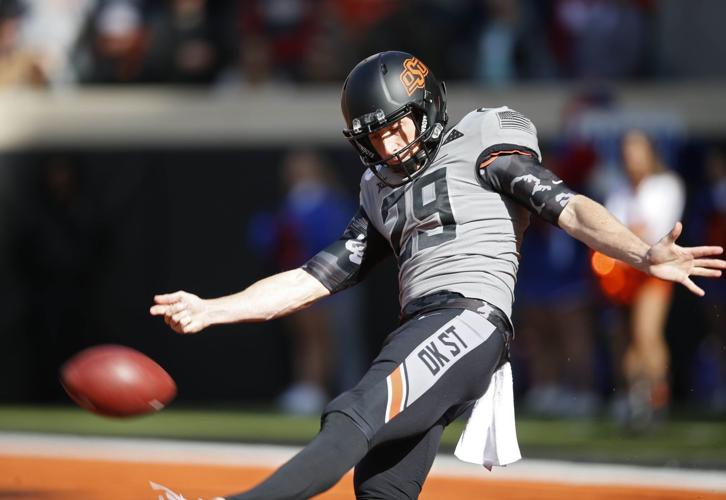 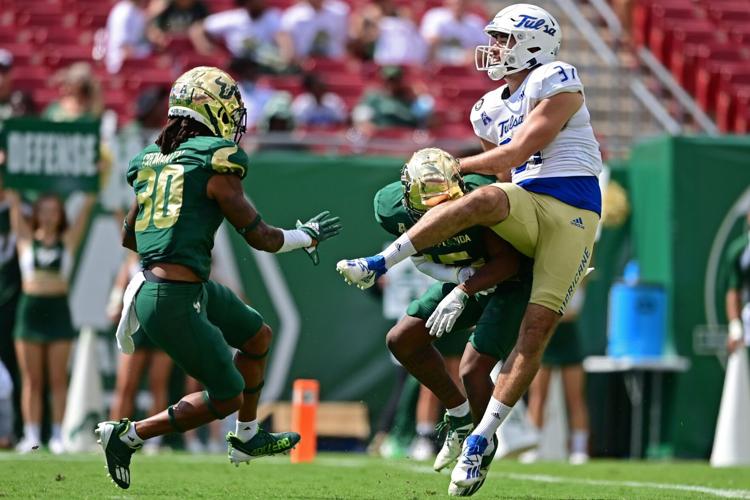 Tulsa punter Lachlan Wilson is roughed by South Florida’s Jayden Curry during the second half of their game, Saturday afternoon at Raymond James Stadium. Tulsa won 32-31.

Oklahoma’s Michael Turk, Oklahoma State’s Tom Hutton and Tulsa’s Lachlan Wilson were among the 48 punters included on the 2022 Ray Guy Award preseason watch list Wednesday morning. The award is given annually to the most outstanding punter in college football.

Turk, the fifth-year senior, returns to Norman this fall for his second season with the Sooners after transferring from Arizona State in 2021. Turk averaged a conference-best 51.2 yards per kick on 35 punts en route to an All-Big 12 first team selection in debut season. He was the lone OU player selected to the All-Big 12 preseason first team earlier this month.

Hutton, the Cowboys’ 32-year-old punter from Australia, helped OSU lead the Big 12 and finish second in the nation in yards allowed per return in 2021. His 42.4 yards per punt ranked No. 8 in the conference last fall while Hutton paced the Big 12 with 32 fair catches.

Like Hutton, Wilson’s path to football and the Golden Hurricane began in Australia on the pitches of Australian-rules football before the redshirt junior came to TU in 2019. His 45.7 yards per punt in 2021 ranked third in the AAC.

OSU’s Matt Fodge (2008) remains the only punter from Oklahoma’s FBS football programs to claim the Ray Guy Award since its inception in 2000.

While the punters across the state landed on the Ray Guy Award watch list, Golden Hurricane kicker Zack Long appeared on the preseason watch list for the 2022 Lou Groza Award, given each year to the nation’s top kicker.

Long connected on 22 of 23 field goal attempts last fall, leading the AAC with a conversion rate of 95.7%.

Venables statement: "(Gundy) chose to read aloud to his players, not once but multiple times, a racially charged word that is objectionable to everyone and does not reflect the attitude and values of our university or our football program."

Guerin Emig: Why defensive-minded Brent Venables is the right coach at the right time for OU's offensive players too

Lincoln Riley didn't leave the Sooners in a rut, but there is no question his successor's iron-tough mentality has translated to a welcome culture change, and not just for linebackers

When Oklahoma opens the Brent Venables era against UTEP on Sept. 3, the Sooners’ first-year coach will see a familiar face on the opposite sideline.

'Everything goes through them': Venables, Roof intend to lean heavily on OU's linebackers in 2022

Speaking to reporters days before the start of preseason camp, Oklahoma coach Brent Venables made clear the role he expects his linebacking corps to play in the Sooners’ defense, both in 2022 and beyond.

Washington, who spent four seasons as wide receiver at the University of Missouri from 2010-13, joined Brent Venables’ staff in January as an offensive analyst and assistant receivers coach.

Oklahoma is in the top 10, while Oklahoma State received its highest preseason ranking since 2017.

What can Sooner Nation expect from Brent Venables? We polled Big 12 coaches, who talked current 'DNA' and SEC future

A handful of Big 12 coaches got familiar with Brent Venables during his days at Clemson.

Fall camp has arrived, so let's catch up on the 2022 Sooners with Eric Bailey and Eli Lederman.

Brent Venables and the Sooners kicked off August right where they left off in July with Monday's commitment from four-star defensive end Colton Vasek, the 10th commit to Oklahoma's class of 2023 since July 1.

Oklahoma punter Michael Turk (37) warms up before a NCAA football game between Oklahoma and Kansas State in Manhattan, Kansas on Saturday, Oct. 2, 2021.

Tulsa punter Lachlan Wilson is roughed by South Florida’s Jayden Curry during the second half of their game, Saturday afternoon at Raymond James Stadium. Tulsa won 32-31.