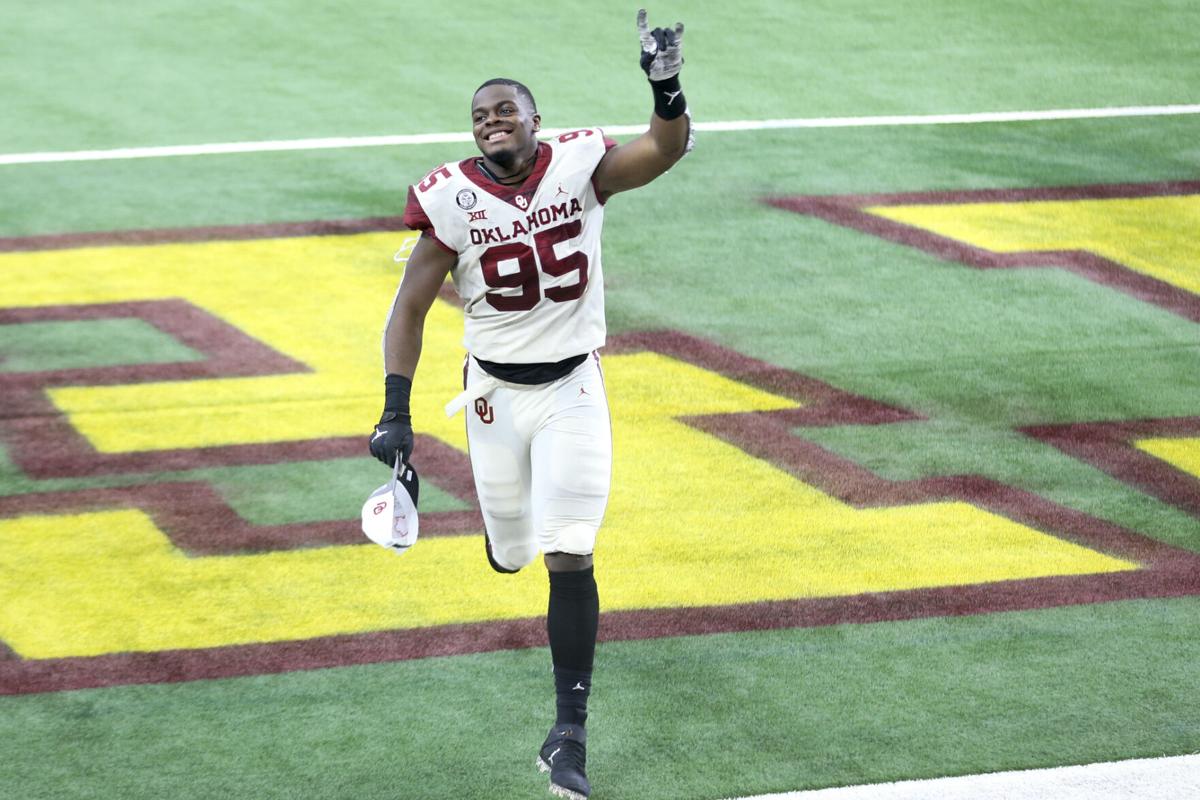 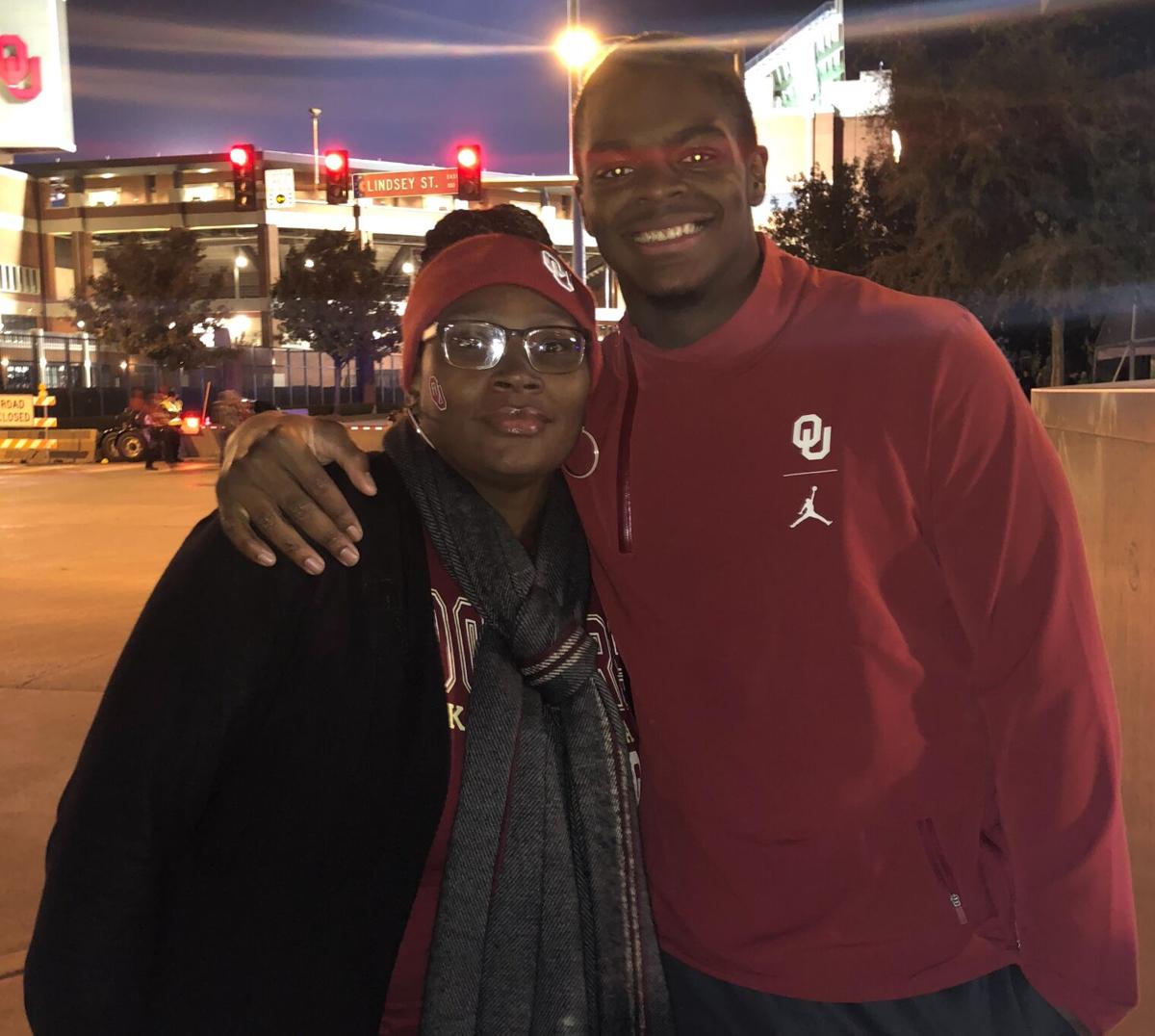 Isaiah Thomas poses for a photo with his mother, Leslie Sones, following an Oklahoma football game. 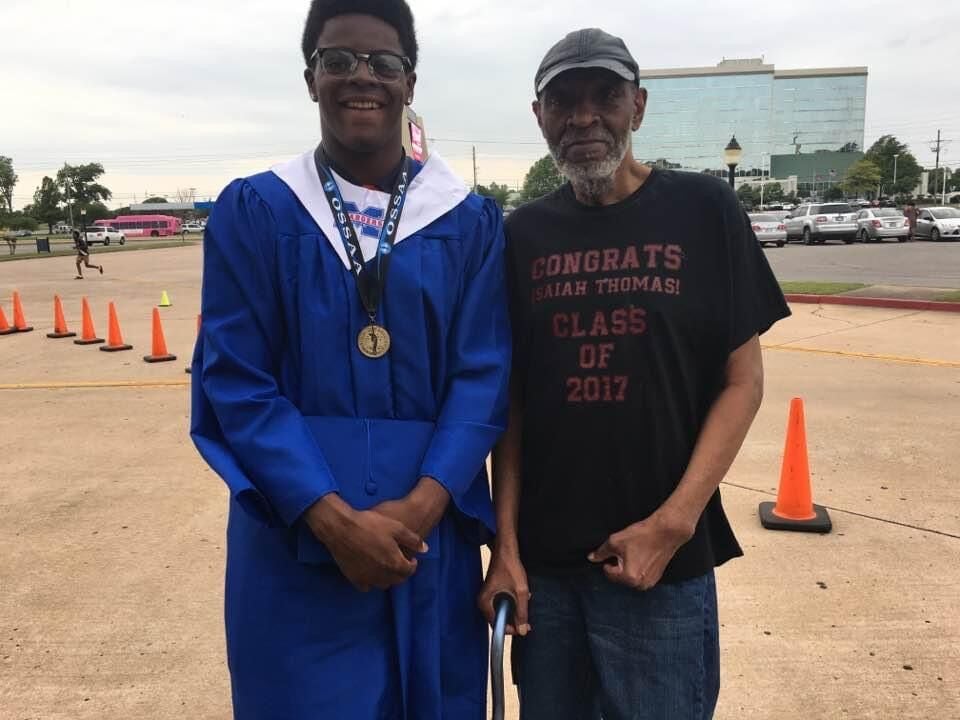 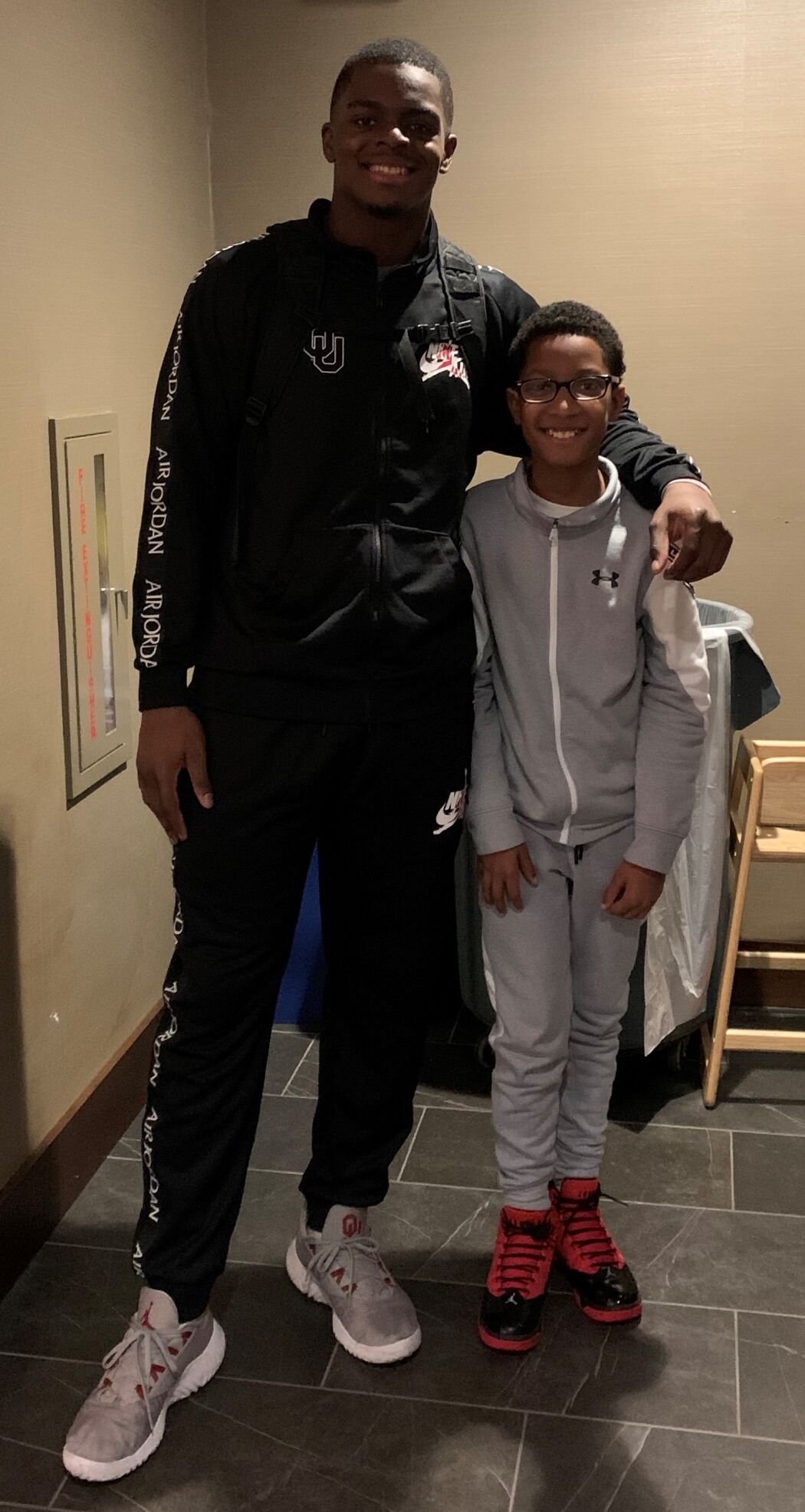 Isaiah Thomas poses for a photo with his younger brother Victor Brown at the Peach Bowl. 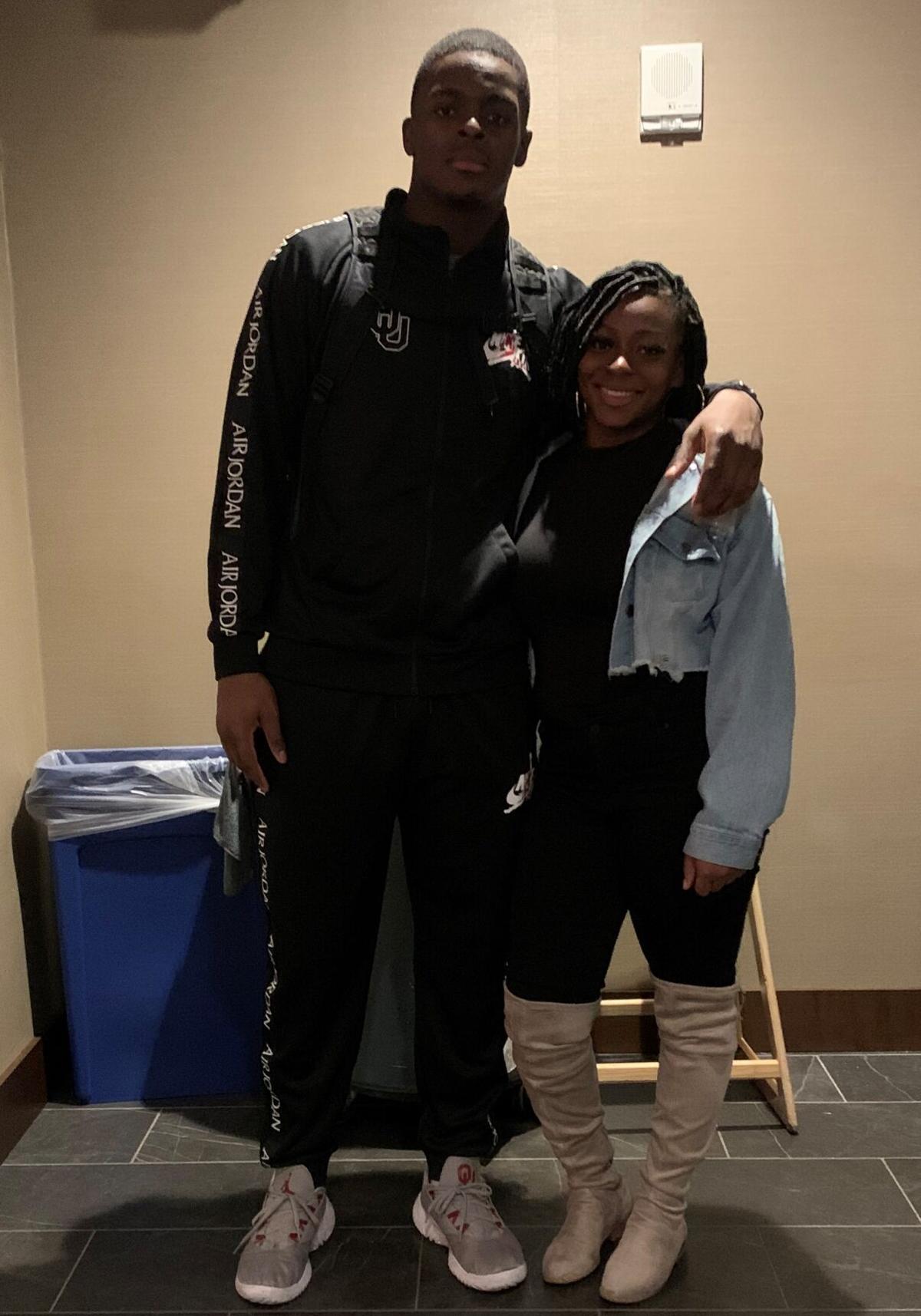 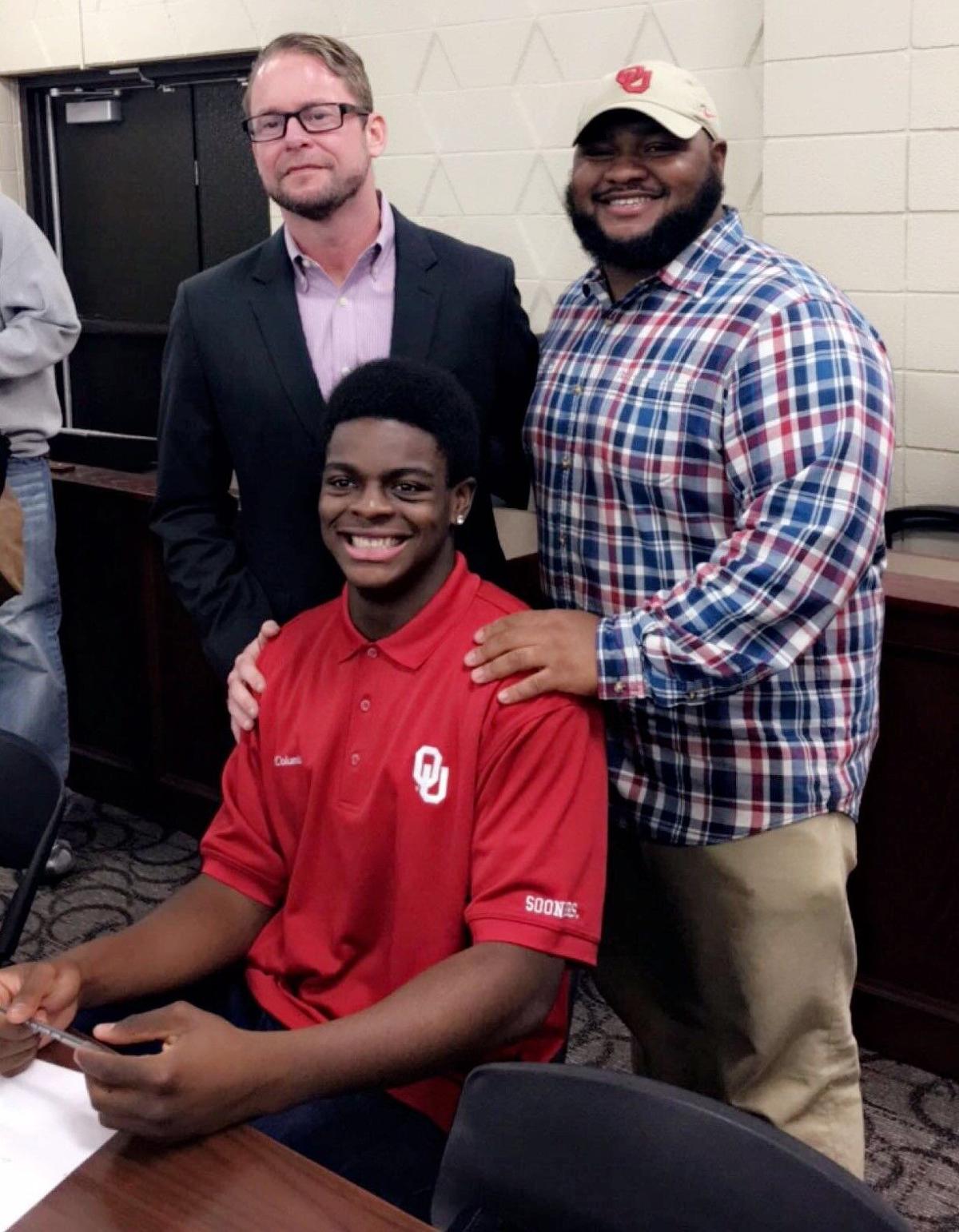 Isaiah Thomas poses for a photo with his uncle Bobby Brown and Memorial High School coach Ryan Reed at Thomas' signing day in 2017. 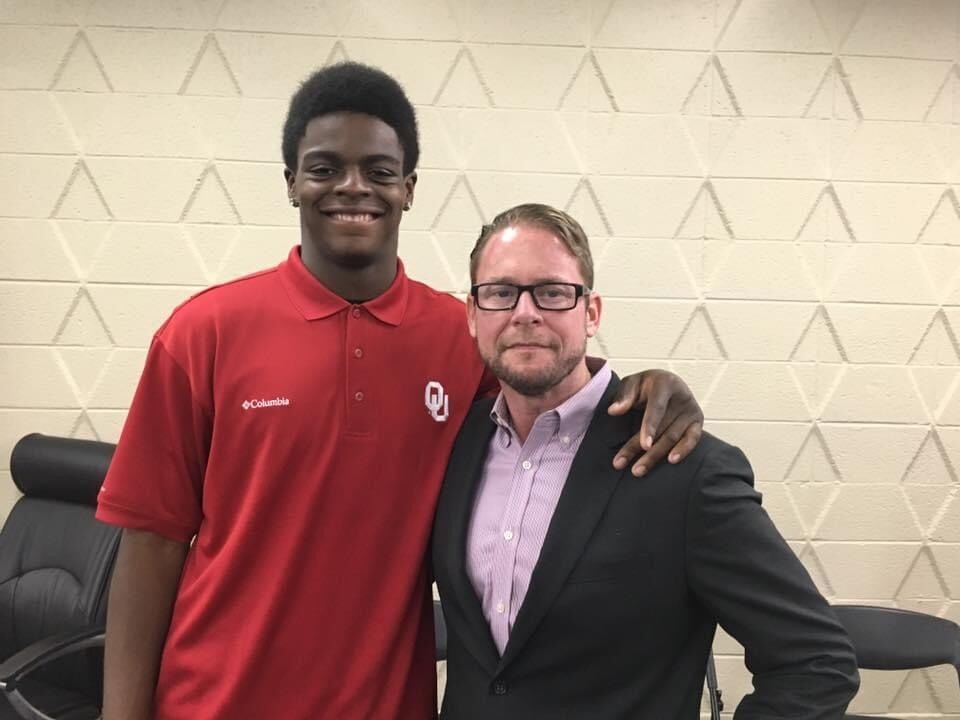 Isaiah Thomas, taking a photo with then Memorial High School coach Ryan Reed, signed with the University of Oklahoma in 2017. 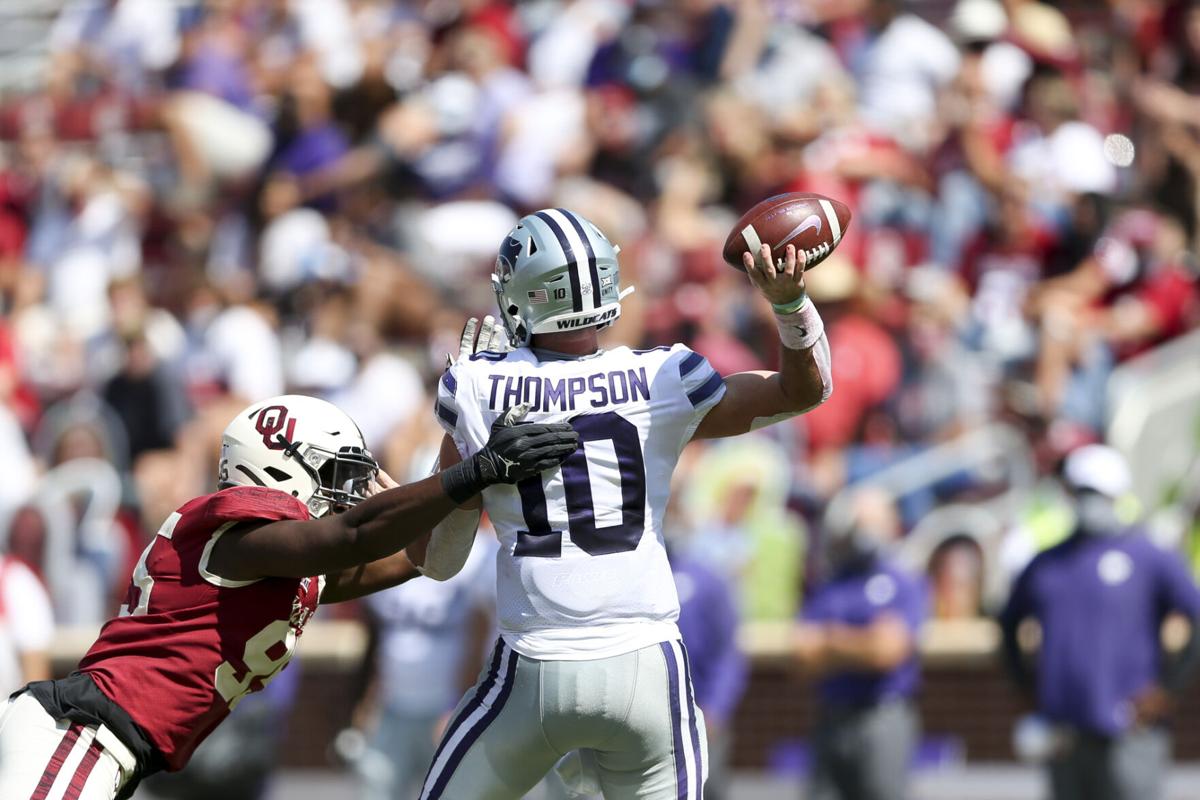 His grandson, Isaiah Thomas, has developed into an outstanding young man. On the football field, the Oklahoma defensive star terrorizes opponents with vicious play that earned him an Associated Press All-Big 12 first team selection on Thursday.

Off the field, Thomas is delicate with his feelings toward family, jokes it up with his friends and simply enjoys life.

On Christmas Day, the family will be together as one. There will be laughter, joy and reminiscing about role models like Leonard Ferguson, who helped mold Isaiah into the man he’s become today.

Family is needed during the good times and the tough times. They’ve celebrated when Thomas has made significant plays on the field. They encouraged him when early playing time wasn’t available.

Thomas’ outgoing personality is a reflection of his family.

“I have so many people being many key factors for the reason that I’m here,” Thomas said. “It always falls back (on) that they risked and sacrificed so much for me to get here. Why not make the most of it and be the best that I can be? I think of that before every single game. I can’t believe the supporting class that I have at home.”

Leonard Ferguson passed away on Aug. 1, 2017. Just months earlier, he wore a shirt that said “Isaiah Thomas Class of 2017” to his grandson’s Memorial High School graduation. He never got to see his grandson play at OU. But he helped mold Thomas into the person that many see today off the field.

“That’s the biggest inspiration I probably ever had in my life. I was his oldest grandson. I would always spend the night over there. He would always talk to me. He was such a wise man,” Thomas said.

Leslie Sones, Isaiah’s mother, was Leonard Ferguson’s only daughter. The father-daughter relationship wasn’t lost on Thomas, who absorbed everything.

“He showed me how to carry myself as a young man. His wisdom, his guidance and his leadership, I can’t speak about that enough,” said Thomas, who has a graduation picture with his grandfather as a screen saver on his iPad. “He taught me how to treat women. It was just by far something I haven’t experienced from another man. He was a great man and everything he did, he did to his greatest capability.”

Thomas said his father hasn’t been a part of his life, meaning Leslie Sones handled all parental duties.

But what happens when a young man needs a heart-to-heart talk with a male figure?

“He’s been a mentor to me and like a father figure to me,” Thomas said. “He showed me the ropes. When I wasn’t at home, I was at my grandmother’s house with him. He showed me what it is like to take that leadership of being the man of the house.”

Imogene Ferguson, Isaiah’s grandmother, is the glue that keeps everything together. He laughed when saying she’s the cook and the voice of the family.

Thomas wore No. 55 in high school because Brown did. He wanted the number at Oklahoma, but teammate Kenneth Mann already possessed it. Thomas said if he plays in the NFL, he knows what number he wants to wear.

“He’s the closest thing I have to a father in my life. He means more than anything to me,” Thomas said. “He took me to get my ears pierced, he helped me get in my first year of football, he got me a pair of shoes every year before school. He did everything in his power that he could to be a role model, to be that father figure for me.”

Brown was one of the first people Thomas communicated with after drawing a football offer to Missouri. But when OU showed interest, the recruiting race was over.

During Thomas’ first two seasons, there wasn’t much playing time. It would have been easy to get discouraged. But Thomas didn’t look to transfer. He stayed true to his OU commitment.

Sooners coach Lincoln Riley has mentioned multiple times that Thomas’ story is a testament to what happens if you don’t give up too early.

What was Brown’s advice to his nephew during the down times?

“I was trying to keep him encouraged,” Brown said. “Anytime you aren’t getting the opportunity that you would like to get, there’s definitely frustration that could set in. But he really kept a level head and a determined mindset throughout the entire process. It’s kind of a cliché, but he really just kind of waited his turn and kept working until he got that opportunity.”

Leslie Sones raised four children on her own. Like many working families, they’ve faced tough times. But they never did without, thanks to the hard work of his mother.

Sones’ oldest son will always be her baby. After three hours of physical football, she’s always ready to look after him. It’s not just at OU. It was also when he played as a youngster.

Thomas recovered a fumble during his fifth-grade season with the south Tulsa Raiders and landed on the ball. He stayed on the field and appeared injured. He just had the wind knocked out of him.

His mom, from the stands in the Jay, Oklahoma, stadium, didn’t know that.

“Her baby boy got hurt on the field,” Thomas said, chuckling while revisiting the story. “All I remember is going to the sideline and my mother was surrounded by several parents on the team.”

She had a shattered tibia after jumping over a fence to get to the field. After the game, the mother and son rode in an ambulance to a nearby hospital.

Sones knew her son was going to be an active person. Even as a baby, Isaiah would track down food off a friend’s plate or was just bouncing off the walls.

He loved basketball — he was named after former Detroit Pistons star Isaiah Thomas — and played through high school.

Isaiah Thomas grew fast. He was wearing men’s size 12 shoes when he was eight, his uncle said.

Perhaps some of the mother’s proudest moments were watching Isaiah volunteer for community events like reading to children at elementary schools and helping with Fall Festival parties.

Brown is impressed with his sister Leslie’s parental guidance, especially with her oldest daughter getting an academic full ride to Oklahoma State and Isaiah earning a full-ride scholarship at Oklahoma.

“She’s done everything she can to raise great kids,” Brown said. “The proof is in the pudding. She’s really sacrificed the time to for her children. She’ll do anything for her kids.”

“As you know, girls mature faster than guys. I was the knucklehead who would play around and be a goofball,” Thomas said. “Alexis was always so poised and in control. She would make dinner for the family when she was 12 years old. She’d make sure my younger siblings would go to bed if I had a late game or if my mother had late-night shifts at work.”

Alexis, who is scheduled to graduate this spring from Oklahoma State, likes watching her brother off the field.

Thomas is nine years older than Victor, his youngest brother. Similar to the relationship he has with his uncle Bobby, Thomas is a role model to Victor.

They played video games together and they played basketball games together. When Victor would get upset after a loss, Isaiah had one message to little brother: “Who cares? Try harder.”

“They are close. If Vic gets in trouble at school or something is going on, Isaiah will talk to him and encourage him. If he needs to discipline him, they will. They are extremely close,” Sones said.

“Our relationship is more so (giving) advice. What type of guys are there to look out for? What’s it going to be like outside of high school? I know she has Alexis. But I’m there for her for advice or someone to talk to. I’m always there for her,” Thomas said.

Thomas has a strong locker-room presence. Everyone knows what he’s like on the field. But what is he like off the field?

If Thomas didn’t have football, what would he be doing?

“Anything that involved interacting with other people is my strong suit,” Thomas said. “Even acting. I love acting. I took acting classes here at OU. I love that kind of stuff.”

Former Memorial coach Ryan Reed, who had both Bobby Brown and Isaiah Thomas on his teams, will always be impressed with Thomas.

“It’s just infectious. You want to hang out with him. His smile lights up a room,” Reed said. “You could have him go to an elementary and read to kids or you could have him talk to the school board. He’s extremely humble.

“His whole family is that way. The biggest testament to Isaiah is he’s just a product of a great family.”

Isaiah Thomas poses for a photo with his mother, Leslie Sones, following an Oklahoma football game.

Isaiah Thomas poses for a photo with his younger brother Victor Brown at the Peach Bowl.

Isaiah Thomas poses for a photo with his uncle Bobby Brown and Memorial High School coach Ryan Reed at Thomas' signing day in 2017.

Isaiah Thomas, taking a photo with then Memorial High School coach Ryan Reed, signed with the University of Oklahoma in 2017.