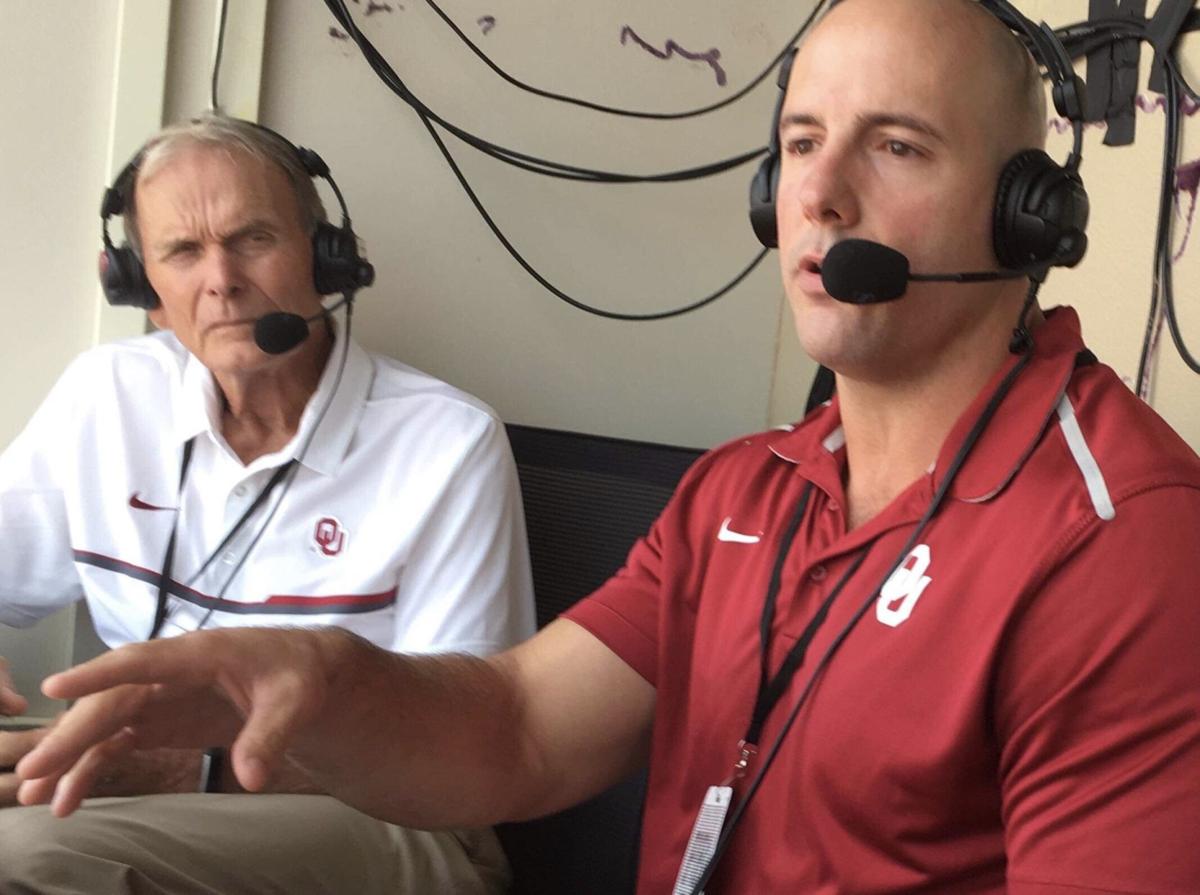 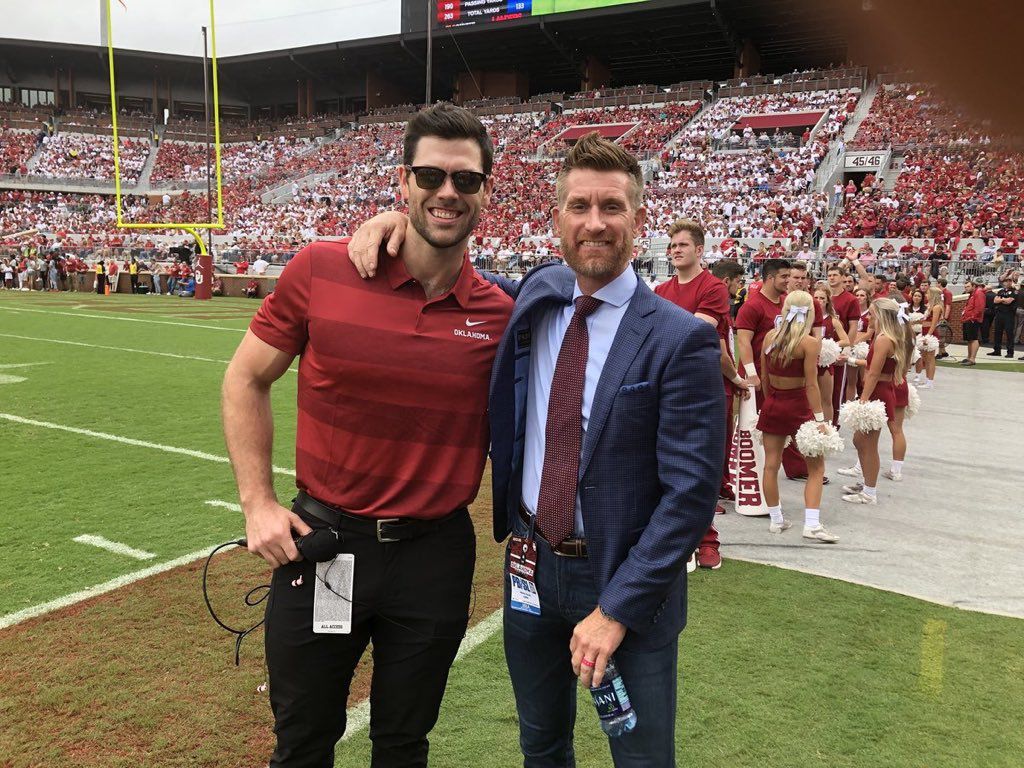 Teddy Lehman never believed he would join the media.

Oklahoma’s former star linebacker would give one-word answers when questioned during his college career, which ended in 2003. He now works with current players as an OU radio analyst and enjoys every aspect of the job.

Gabe Ikard, an All-American center, enjoyed the banter with reporters. That made his transition into a sideline reporter during OU games a smooth one.

The pair recently created “The Oklahoma Breakdown” podcast, with a goal to have discussions about sports and life, including a heavy dose of OU football.

“Our vision is for the podcast to be something that people in this area of the country can relate to and enjoy. There’s lots of sports podcasts out there. We know that. But how many of them understand the people around here?” Ikard said. “To some of these popular sports podcasts based in Los Angeles or New York City, Oklahoma isn’t even worth mentioning. For us, Oklahoma is everything. It’s home.”

Lehman said some of the best podcast content comes when they aren’t on the air and this gives them an outlet to capture those moments.

Oklahoma athletic director Joe Castiglione jokingly called the former players’ move to the media a jump to “the dark side.” He says he’s proud of the pair.

“It’s a ‘180’ move,” Castiglione said, adding a laugh. “They are great guys and have a lot to offer with loads of personality. And they are super smart and really insightful.”

Lehman, a Fort Gibson native, has been with the OU radio network and host of “The Rush” afternoon show on Norman’s KREF-FM 99.3 since 2012.

He says Toby Rowland, the Sooners’ play-by-play announcer, has been his mentor.

“I don’t know where I’d be or if I would even be doing this if Toby Rowland wasn’t there,” Lehman said. “He’s so fun to work with and so professional. He is more than happy to help and give advice.”

Rowland has been impressed with Lehman’s growth as a broadcaster. Lehman started on the sideline and moved to the broadcast booth prior to the 2018 season.

“I don’t know that I’ve ever seen anybody who is better in getting a complicated thought in a short amount of time in a concise manner than he is,” Rowland said. “He’s able to describe complicated football schemes and explain what coaches are trying to accomplish on offense or defense. You’ve got 8-to-10 seconds to do that before the next play.”

During Lehman’s playing career, which included winning the Butkus Award (top linebacker) and Bednarik Award (top defensive player), he wasn’t a fan of the media. Rowland chuckled when saying he’s shocked that Lehman has chosen this field.

“I made it a point of giving one-word answers,” Lehman said. “There were a lot of guys that were good with the media and enjoyed it. I wanted to leave and get out of there. I knew the worse I did at interviews, the less likely they’d ask me to do it again. Looking back at it, it was a horrible way to approach it and I wished I embraced that process a little more.

“It’s funny because there’s no way that I ever thought this would be the route that I took.”

Ikard was the opposite with the media during his OU playing career between 2010-13. A consensus All-American in 2013, he is a graduate of Bishop McGuinness in Oklahoma City.

Ikard was an OU fan during Lehman’s playing days and became friends with the former linebacker on the sideline during his playing days.

His own turn to media, like Lehman’s shift, caught him off-guard.

“I always enjoyed talking to reporters after practices and games, but it never really crossed my mind that it could turn into my career. I was planning on being a doctor,” Ikard said. “That was still the plan even when I went to play in the NFL. But after four seasons, a lot in my life had changed.

“Some sports media opportunities had come my way unexpectedly and medical school didn’t sound quite as appealing anymore. I have no regrets. I’m really enjoying talking about sports and entertaining people. It doesn’t feel like work and I feel like that’s the whole goal in life, right? I’m going to keep at this because I love doing it.”

Ikard has been doing the OU pregame show for the last two seasons and had a 2.5-year sports talk run with Oklahoma City radio station KRXO 107.7 The Franchise recently end. He’s also coming up on two years doing Big 12 Today on the SiriusXM Big 12 channel.

What would Ikard be doing if not for media or football?

“I would be a doctor or lawyer. My mom constantly reminds me that there’s still time for me to go to medical school or law school,” Ikard said.

“With how much I’m enjoying doing what I am doing, I can’t imagine doing anything else.”

Teddy Lehman: “The two Baylor games (in 2019) were great. There was a lot of fun. There was some really interesting gamesmanship stuff happening. They were tight football games, the one down in Baylor with the comeback that was great. It was a loss, but the Georgia game in the Rose Bowl was so much fun. There were so many high-level players on the field and great action back-and-forth. That game had everything.”

Gabe Ikard: “The OU comeback against Baylor last year in Waco. That game was nuts, being down 28-3 with everything possible going wrong in a hostile road environment. No CeeDee Lamb. Feeling the momentum shift in that second half was incredible. That's the most fun I've ever had at a football game that I wasn't playing in. The energy on the sideline as the Sooners came back to win 34-31 is hard to describe if you weren't there. That game was one of those things that just makes you appreciate how great sports really are.

Lehman: “The LSU game (in 2019). There’s a lot of buildup leading up to it. You are so excited for the huge platform, the College Football Playoff game. This is an amazing opportunity. And it is over in the first quarter. You have to find a way in the remaining three quarters to make it interesting, to find something to talk about, to spin positives and look forward to the next season. That’s not what you want to be doing during a College Football Playoff broadcast.”

Gabe Ikard: “The Orange Bowl against Alabama in 2018. I liked the Sooners chances a little more in that game than I did against LSU in the Peach Bowl. That was a really good OU offense with Kyler Murray and that game was 28-0 and over so quickly. It was unfortunate to see them take so long to get going in that game. Some people may call me a homer, but I always try to be honest and fair when I speak about the players when OU has a disappointing loss. I was a part of a few of those when I played there, so I know how it feels. It's not great. No one wants to win more than the guys in that locker room.”

OU football: Reinstatement process for suspended players 'not as clear cut' as Lincoln Riley thought it would be

Trejan Bridges, Ronnie Perkins and Rhamondre Stevenson now have missed six games, which is equal to a penalty for a failed drug test by the NCAA.

Emig: Sooners in race to realize their spectacular offensive potential

The idea here is to appreciate this version of OU offense for what it can do right now, and to anticipate what it might do in the future.

OU at TCU: Everything you need to know about OU's win in four downs

Big plays, players and matchups from Sooners' game in Fort Worth

Oklahoma at TCU: A look at the matchups plus who wins the game

Motley's pro career began as an undrafted free agent with the Tampa Bay Buccaneers, where he made preseason news by intercepting quarterback Tom Brady in practice.

“We got on the field and everyone was saying, ‘We’ve got to get to the 30 for a field goal,’ and I told the guys, ‘Screw that, we’re going to win it,’” Mayfield said of their game winning drive after the game.

Westbrook's injury happened during the third quarter of the Jaguars' Sunday 39-29 loss to the Los Angeles Chargers.

The Sooners will have seven nonconference games while including home games against Florida and Alabama and road contests at Xavier and UCF. The Sooners will postpone a much-anticipated series with Arkansas until next year.

Shepard missed the past four games after suffering turf toe at Chicago on Sept. 27.