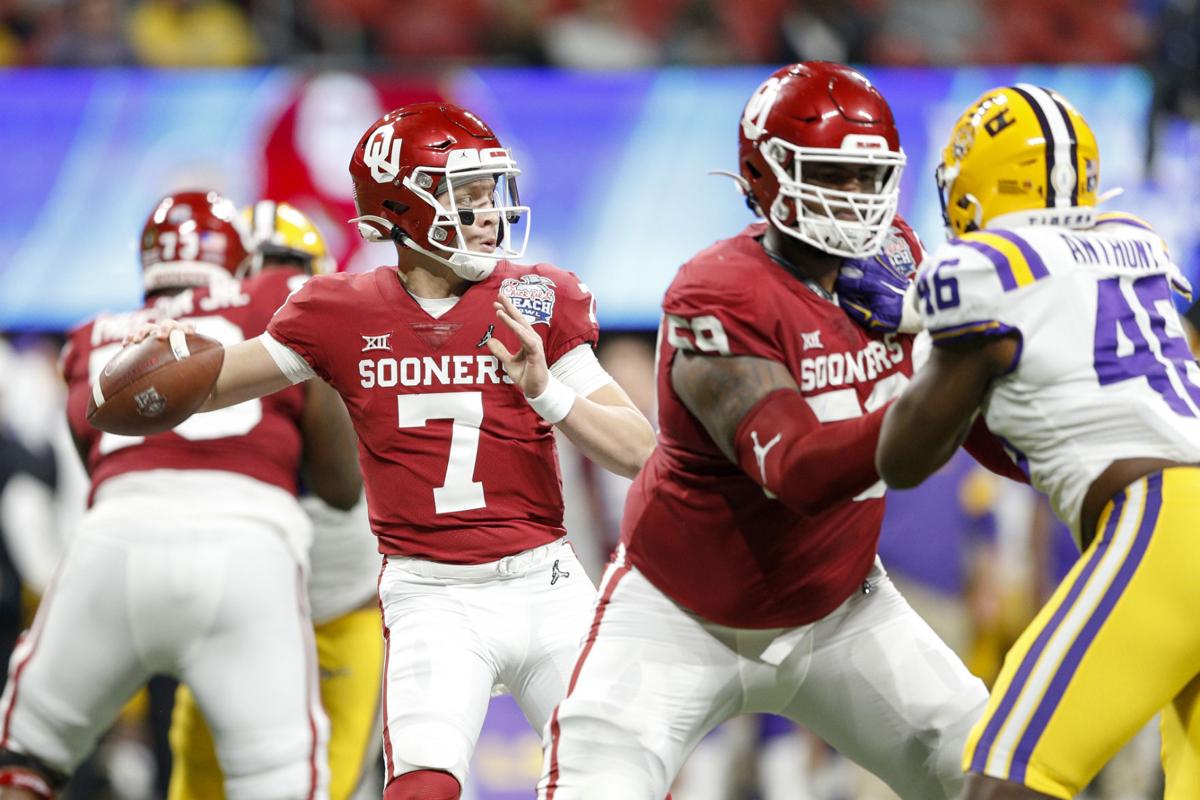 Oklahoma redshirt freshman Spencer Rattler, dropping back to pass against LSU in the Peach Bowl in December, will be the fourth quarterback to start an opener in as many seasons under coach Lincoln Riley. 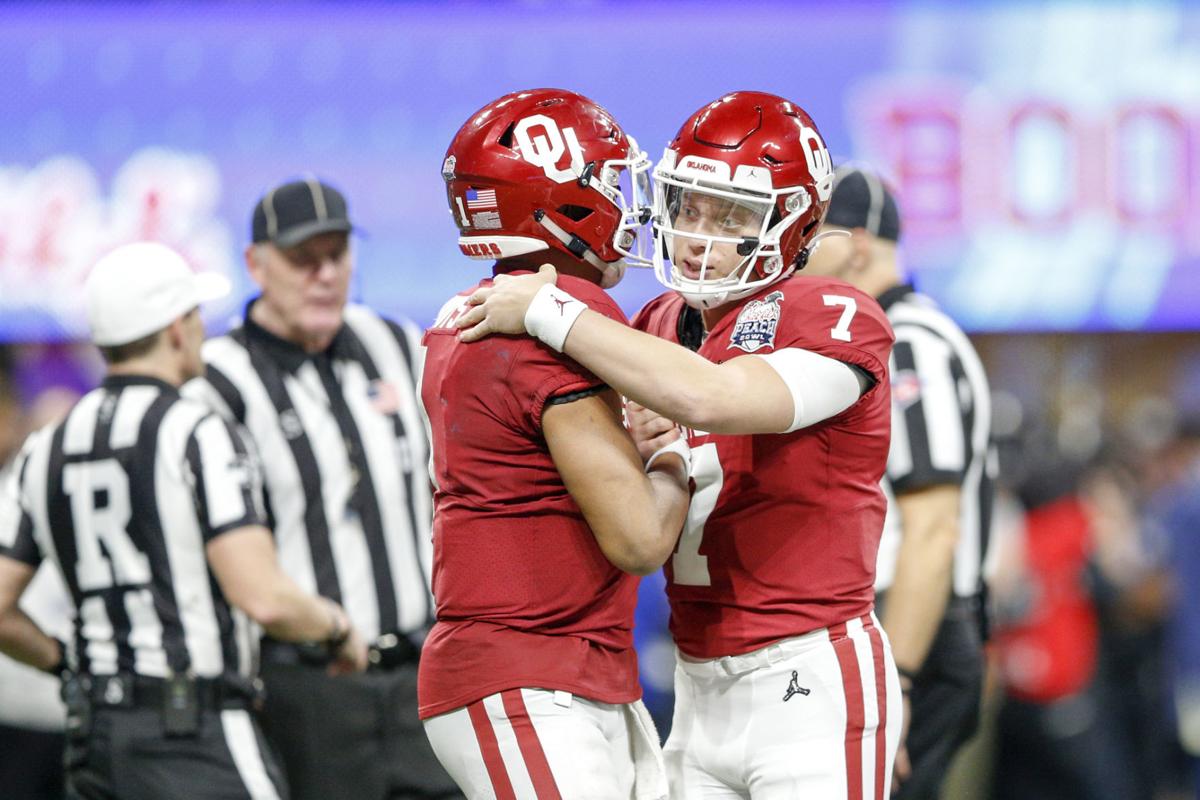 Jalen Hurts (left) hugs Spencer Rattler as he takes over at quarterback late in the fourth quarter of the Peach Bowl against LSU. Rattler is taking the reins from Hurts as OU’s starter.

The Spencer Rattler era is here.

There has been plenty of hype surrounding the Oklahoma quarterback since his arrival on campus.

Last season, Rattler learned coach Lincoln Riley’s system while a reserve behind Heisman Trophy runner-up Jalen Hurts. He saw limited time in three games, which allowed Sooner Nation a glimpse at what was to come.

Does he think it is unfair that Heisman odds are attached to his name? Is it something that he embraces?

“Just being the player I am, I try to just let my play do the talking,” Rattler said this week. “Of course, you're going to see this and that, but that's the last thing I'm worried about.

“I'm worried about just working with my team right now. We've got a great group of guys ready to attack the season, and that's my main focus right now.”

Defensive back Brendan Radley-Hiles was also a five-star recruit out of high school. Hype followed him to OU, as well. What advice would he give Rattler?

“Hype is just talk,” Radley-Hiles said. “He’s got to do it at the end of the day. He has to put it on tape. There’s nothing to talk about.”

When the OU-Missouri State game kicks off at 6 p.m. Saturday, it will pair two men who have coached three of the past four Heisman Trophy winners. Baker Mayfield (2017) and Kyler Murray (2018) earned the award for the Sooners, and Lamar Jackson captured the 2016 honor when current MSU coach Bobby Petrino was at Louisville.

Petrino, who also coached at Arkansas, said he has been impressed with Riley’s reign as an offensive coordinator (2015-16) and head coach (2017-present) for the Sooners.

“I’ve always been a big fan of his, going back to his days at East Carolina, and the things that he’s done there and how much new he’s brought to offenses and schemes,” Petrino said. “He’s also done a heck of a job recruiting quarterbacks. There’s no question about that.

“The other thing is to get quarterbacks to play really well, you have to get the other 10 guys around them to play really well. His ability to utilize the guys on the field, the skill players and the offensive linemen, and make it all work for the quarterback is something that I really respect that he’s done a great job of doing that.”

Petrino said he doesn’t know a lot about Rattler, but he did say there’s a characteristic in the young quarterback that stands out in comparison to Jackson.

“Like Lamar, it’s the ability to make plays with your arm and your legs,” Petrino said. “When you can throw the ball down the field and make all the throws that there is, the game becomes a lot easier for you.”

Riley likely will have the same message for Rattler as he did for Mayfield, Murray and Hurts: Try not to do too much. Just play football.

“Allow him to get into a routine, allow him to get comfortable,” Riley said. “Try to have a plan that they're very comfortable with and then I think, too, it's just guys have gotta understand that you're the starter here for a reason. Just need to relax and go play like it.

“It comes down to knowing their personalities, settling into a routine and eventually, that's (what) guys came here to do. They came here to go play. Here's your chance.”

Stats: 23-of-33 passes for 388 yards; three passing touchdowns and one rushing touchdown.

NORMAN — Merv Johnson, who has been involved with the Oklahoma football program for the last 41 years, announced his retirement as the Sooners' radio analyst Friday.

Johnson, 84, began his OU career as an assistant coach in 1979 under head coach Barry Switzer and served in that capacity until 1997. He then began a 20-year run as the program's director of operations, and was hired by athletics director Joe Castiglione as radio analyst in 1999, working alongside play-by-play announcers Bob Barry Sr. and later Toby Rowland. Johnson worked 513 OU games in a row from 1979-2019.

"I felt very fortunate to have coached and broadcasted for so many years," Johnson said. "Year in and year out I've been so proud to be associated with such a great university and football program. I'm looking forward to spending time with my family. My family is all around me here. I'm going to love watching the games with them."

Oklahoma redshirt freshman Spencer Rattler, dropping back to pass against LSU in the Peach Bowl in December, will be the fourth quarterback to start an opener in as many seasons under coach Lincoln Riley.

Jalen Hurts (left) hugs Spencer Rattler as he takes over at quarterback late in the fourth quarter of the Peach Bowl against LSU. Rattler is taking the reins from Hurts as OU’s starter.