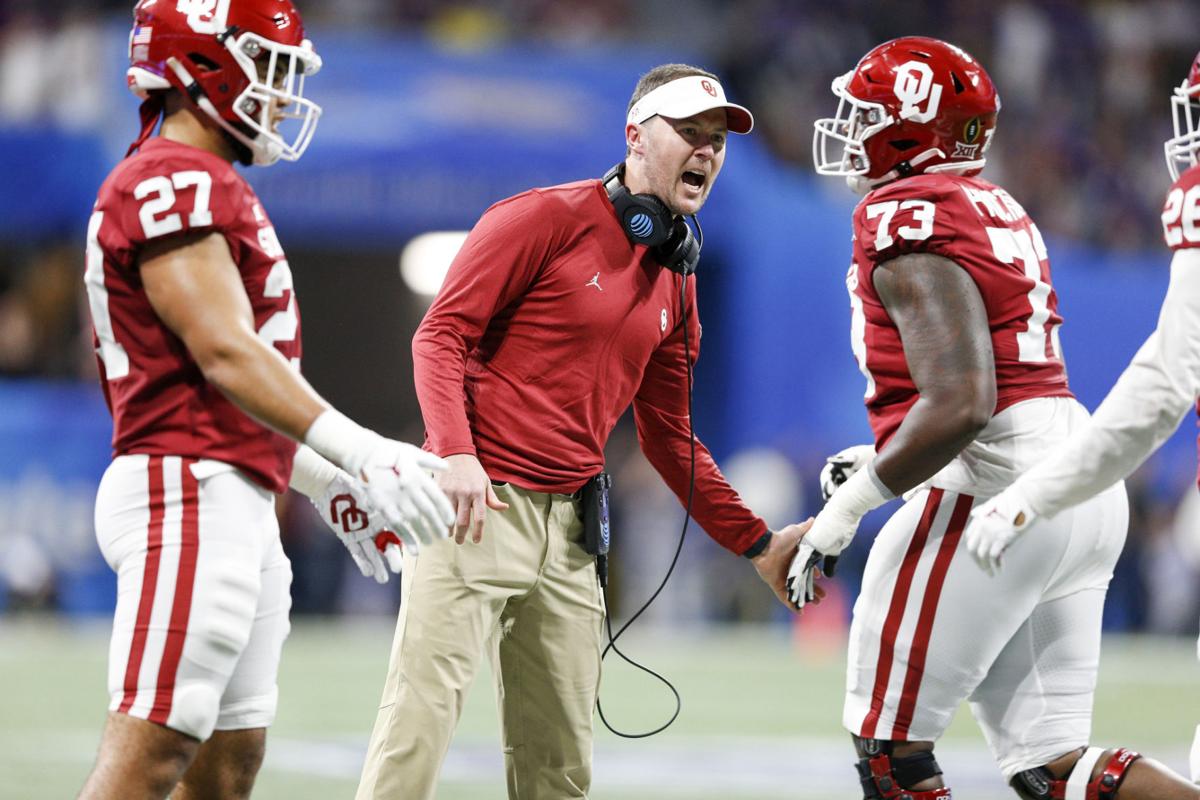 Oklahoma coach Lincoln Riley celebrates with his players after the Sooners scored a touchdown during the Peach Bowl against LSU in December. On Tuesday, the OU Board of Regents extended the coach’s contract by two years. 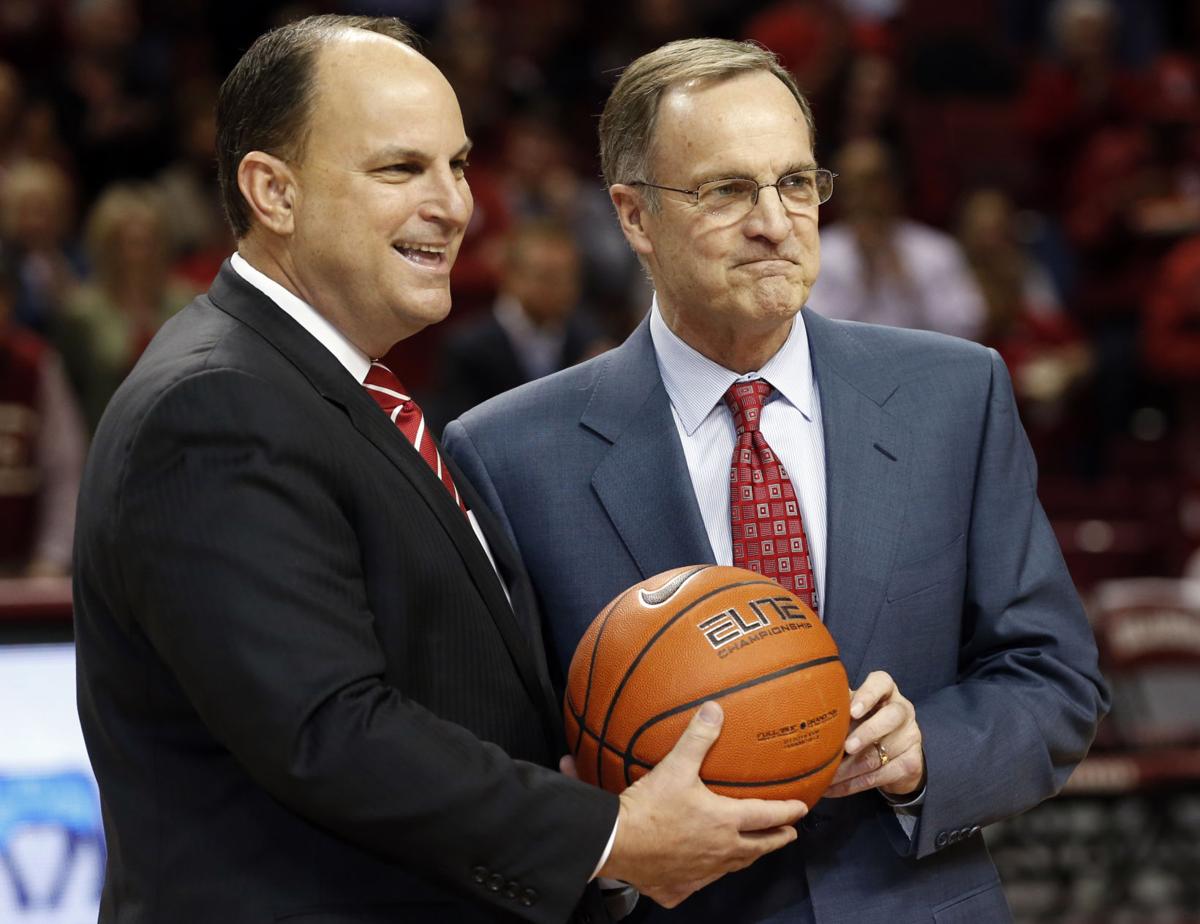 NORMAN — Lincoln Riley’s new contract, which includes a two-year extension through Oklahoma’s 2025 football season and has an average salary of $7.535 million, was approved during a Tuesday meeting of the OU Board of Regents.

New contracts, including raises, were also approved for assistant football coaches, while many other OU coaches received contract extensions.

The football coaches agreed to new contract terms before the current pandemic gripped the nation, OU director of athletics Joe Castiglione told reporters after the meeting at Headington Hall.

“We agreed in principle back in February, both with him and the assistant coaches,” Castiglione said. “We felt obviously that it’s important for us to keep our commitment. We’re very, very understanding of the unique times that we’re in, but in our normal proactive way, we started conversations back in early December that resulted in an agreement in principle in February.

“With that said, it’s reflective of the marketplace. Most importantly, it allows Oklahoma, our program and our fans to have the certainty that our coaches are connected to us for an extended period of time.”

Riley is scheduled to make $45.2 million over the next six seasons, which averages $7.535 million per year.

Did the pandemic affect the framework of the new contracts?

“Coach Riley, and several other coaches that you have already written about have stepped forward to assist in some challenging times by voluntarily contributing part of their salary so that we can make sure we uphold our commitment to student-athletes in areas of scholarships and other student services that are needed, elements of our program that basically keep us going. We thank them for that,” Castiglione said.

“On the other hand, we are still in a significant period of uncertainty. Everyone here understands that. We don’t have all the information, so it’s impossible for us to say exactly how this is going to turn out. People can do their best guesswork and land where they may, but we understand that whatever the future holds, all of us are going to have to be part of contributing to whatever plan that allows us to keep moving forward, sustain ourselves through a very difficult period of time and to be positioned to be successful when we emerge from these challenges for however long they last.”

Defensive coordinator Alex Grinch received a $400,000 raise to $1.8 million. He is the highest paid assistant coach in OU football history.

Prelude: Honoring the '99 Sooners, and their extraordinary place in OU history, 20 years later

Part 2: Some quit, others got in the best shape of their lives. How Jerry Schmidt transformed OU's roster

Part 3: Many want to transfer, but Trent Smith urges players to stay, saying: 'Let's go be part of history'

Part 4: 'Special moments' during season meant, 'We’re so on the cusp of doing something special''

Sounding off: An insight to what players, coaches were thinking during a crucial time in OU history

Where are they now?

A season in photos: The best images from 1999

A game-by-game look at the '99 season

A list of Oklahoma football assistants and their 2019 salaries as approved by OU’s Board of Regents on Tuesday:

Note: First-year coaches Jamar Cain ($435,000, outside linebackers/defensive end) and DeMarco Murray ($350,000, running backs) had contracts approved during a March meeting of the OU Board of Regents.

*** Grinch has a three-year contract; All other assistant coaches with exception of Murray have two-year contracts. Murray has a one-year deal.

Guerin Emig: One player, one problem, one preposterous prediction and one pick for OU-Nebraska

Sooners quarterback Spencer Rattler comes up big, the Huskers not so much

Sooners looking to cut down on mistakes after surviving Nebraska scare

What Oklahoma cornerback D.J. Graham did with his right hand Saturday afternoon will live on for decades.

In the past But players — especially those in the Heartland — made their choices between the Sooners and the Cornhuskers long before the scholarship offer arrived.

The top 10 games in the storied Oklahoma-Nebraska series

Whether it was the Game of the Century in 1971 or OU's signature 2000 win on its way to a national title, the OU-Nebraska series has produced …

Guerin Emig: 'This was Celtics-Lakers, Cowboys-Redskins for the last time' -- a tribute to OU-Nebraska 2010, the rivalry's least appreciated game

With the Huskers Big Ten bound, there was a lot more than a Big 12 championship at stake at Cowboys Stadium 11 years ago

Nebraska at No. 3 OU: Everything you need to know about the game in four downs

The Sooners prevailed on the strength of their defensive front.

Oklahoma coach Lincoln Riley celebrates with his players after the Sooners scored a touchdown during the Peach Bowl against LSU in December. On Tuesday, the OU Board of Regents extended the coach’s contract by two years.