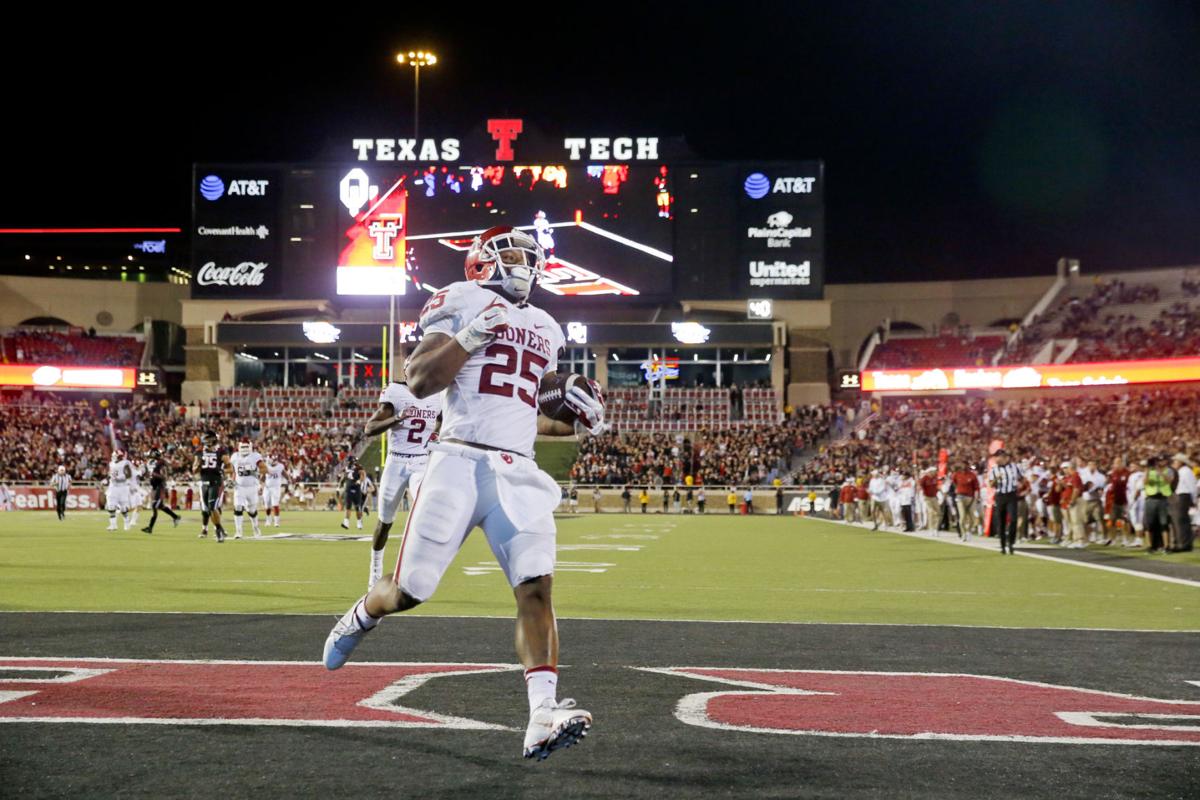 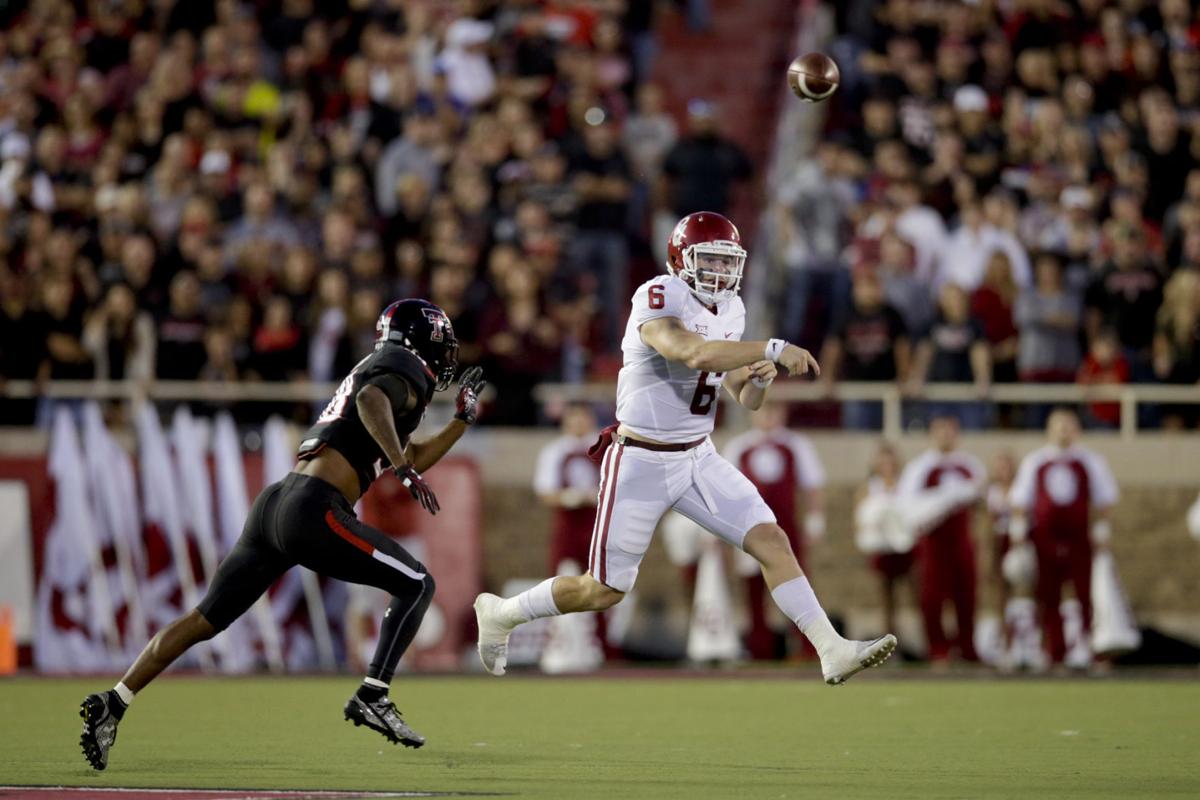 Oklahoma quarterback Baker Mayfield gets off a pass while being pressured by Texas Tech defensive back Kisean Allen in Lubbock, Texas, on Oct. 22. Mayfield has thrown for 359.2 yards per game in Big 12 play. IAN MAULE/Tulsa World 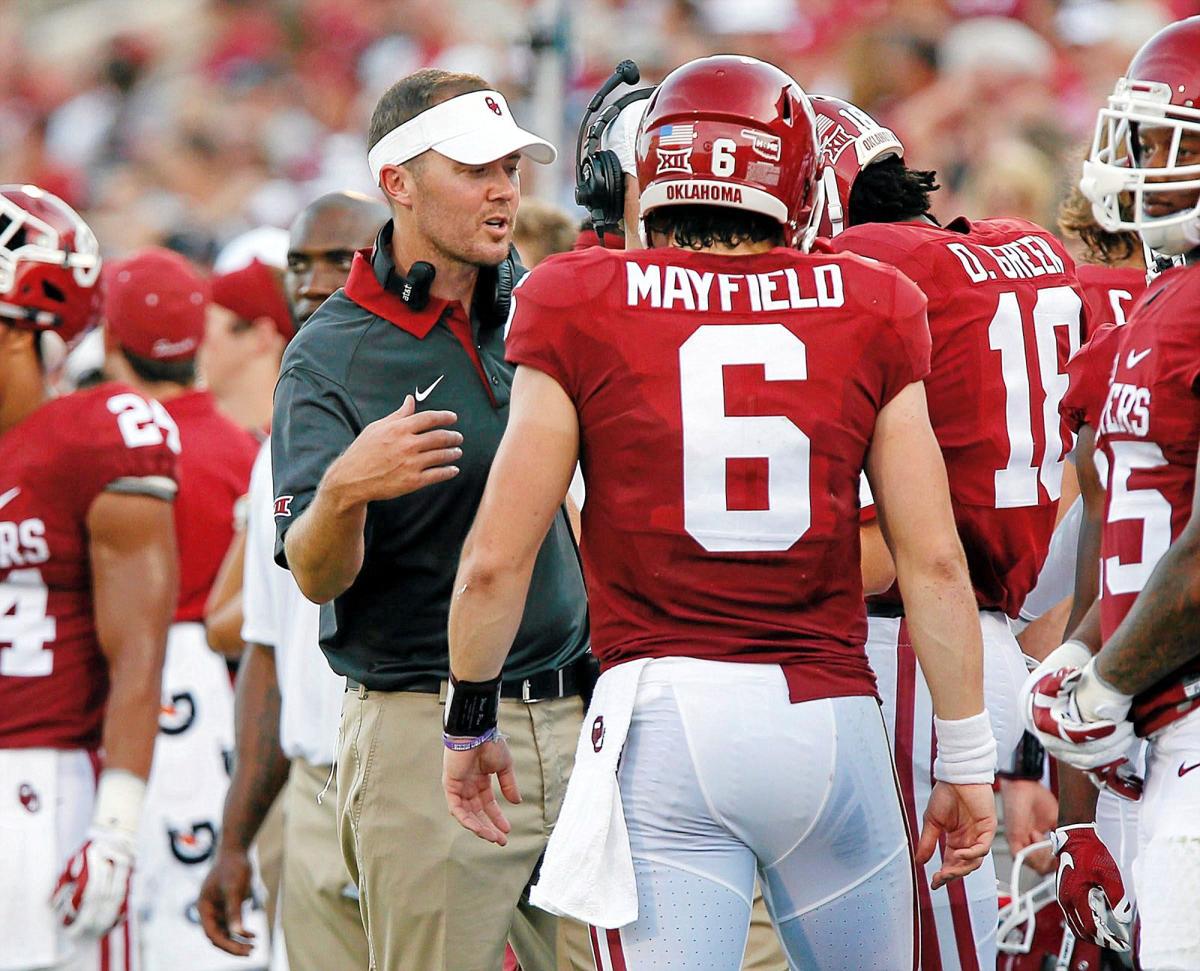 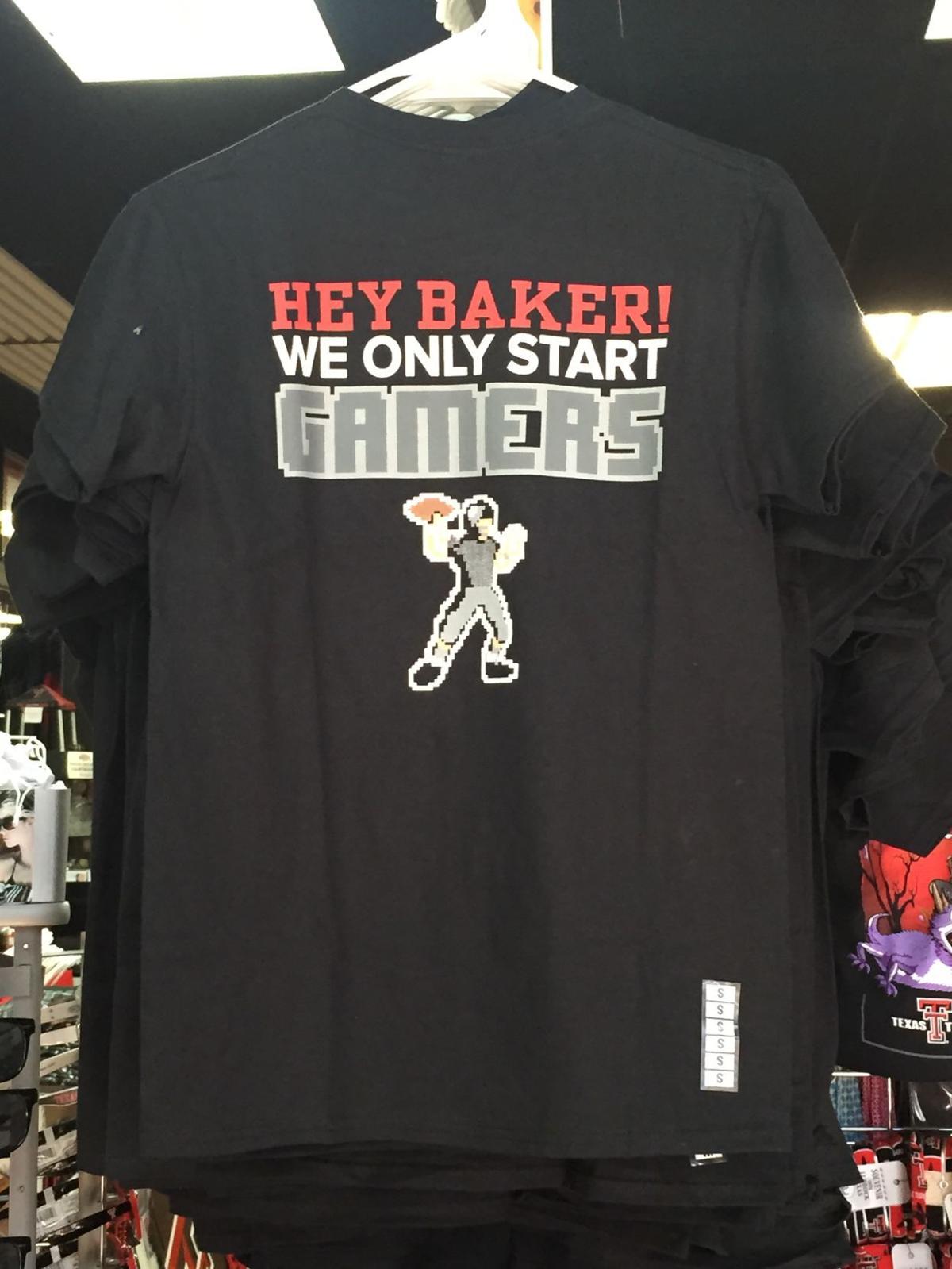 No. 16 Oklahoma at Texas Tech game pulse: Baker Mayfield is player of the game

When the dust settled, the Sooners left Lubbock with a 66-59 victory over Texas Tech in a game that was void of defense.

This wasn’t a football contest.

This was a backyard game in the neighborhood. This was firing up the video game and going for the big play on every snap.

This was Big 12 football.

There is no love for defense in this conference. Offensive fireworks are exciting for fans, but how often should a team score 66 points and still have to sweat out a victory?

Only one thing was attractive about this shootout for Oklahoma.

It was a victory.

“We did what we needed to do to win,” OU coach Bob Stoops said after the four-hour, 10-minute marathon of a game. “Made enough plays to win. Frustrated by just the defense’s ability to make plays, in particular on third down ...

“Now that’s on us. Just not good enough. But sure elated with our offensive performance, Coach (Lincoln) Riley, the staff and the players, just their execution.”

No. 16 Oklahoma (5-2 overall, 4-0 in Big 12) won thanks to a three-headed monster featuring quarterback Baker Mayfield (545 passing yards), running back Joe Mixon (263 rushing yards) and wide receiver Dede Westbrook (202 receiving yards). OU became the first college football team to have a 500-yard passer and a 200-yard rusher and receiver in the same game.

Meanwhile, an OU defense was battered and bruised by Texas Tech quarterback Patrick Mahomes and a bevy of Red Raiders receivers.

Obviously, there were different temperatures on both sides of the football after the shootout. Westbrook and linebacker Jordan Evans were asked the same question:

“That’s the fun part,” Westbrook said. “Those guys drive down the field and they have the momentum and their crowd behind them and we come and shove it right down their throat with our offense. We just keep fighting and make them be quiet.”

Said Evans, when asked if it was a frustrating night: “That’s embarrassing. It was frustrating. Offense did their job and I felt like we didn’t. I can’t be upset because we still got the win and I’m proud of (the offense). We’ve got a lot of stuff we need to get corrected to get better.”

This was supposed to be Mayfield’s triumphant return home to Lubbock. But the former Texas Tech quarterback shared the spotlight with a sophomore running back that gets better each week.

Mixon was magical Saturday night. He was asked to carry much of the load because of an injured Samaje Perine and not only scored two touchdowns at running back, but he caught four passes and scored touchdowns on three of the receptions.

“It was real fun,” said Mixon, who did a post-game interview with OU’s TV production crew. “Coach Riley told me to put the team on my shoulders, and I basically was feeding off our receivers and Baker. The line did a hell of a job. I’m going to treat them to something this weekend or Monday or whatever. It was fun, it was real fun.”

Mixon finished with 114 receiving yards to become the first OU player with 200 rushing and 100 receiving yards in a game. Four of his five touchdowns covered at least 40 yards.

Oklahoma (5-2, 4-0) only trailed for 20 seconds in the game. After Tech took a 24-23 lead with 37 seconds remaining before intermission, the Sooners added a two-play drive capped by Nick Basquine’s 23-yard touchdown reception from Mayfield.

Mayfield couldn’t ignore a Texas Tech student body targeting him before the contest.

After pregame warmups, the OU quarterback didn’t put his head down and jog to the locker room. Instead, he sprinted in front of the fans — some wearing black shirts with “traitor” on it — and waved his arms to further ignite a rowdy crowd.

This week, Mayfield tried to downplay his first return to Lubbock. But during the contest, he couldn’t hide his enthusiasm.

“It’s great to come in here and get a victory,” Mayfield said. “Obviously, there’s a lot of history with the fact that I came to school here.

“But the college football part, people yelling the chants, that’s what makes it fun.”

While Mayfield was enjoying the chance to throw a school-record seven touchdown passes, the defense couldn’t get stops. Texas Tech was 20-of-25 on third down, including a perfect 7-of-7 when facing third down-and-10 or longer.

“I was very disappointed in our effort and our coaching. It’s unacceptable,” defensive coordinator Mike Stoops said. “It’s disappointing when we thought we were making some improvements to really fall on our face like this.

“We’ve got to reevaluate a lot of things we’re doing, who we’re playing. We’re thin in a lot of areas but just to throw the ball up there and catch balls, it’s not good football by anybody’s imagination.”

With five games remaining — including two (home against Kansas and road at Iowa State) in 12 days — OU has to find some way to improve on defense.

“Oh, we were frustrated. You’re gonna get frustrated,” Evans said. “You just have to keep your composure and stay as a unit. You can’t point fingers. You have to build people up because no one was happy with that (performance). If you get down on each other, people are going to get into a shell. We just stayed as a team. It wasn’t pretty, but we got the win.”

Oklahoma quarterback Baker Mayfield gets off a pass while being pressured by Texas Tech defensive back Kisean Allen in Lubbock, Texas, on Oct. 22. Mayfield has thrown for 359.2 yards per game in Big 12 play. IAN MAULE/Tulsa World