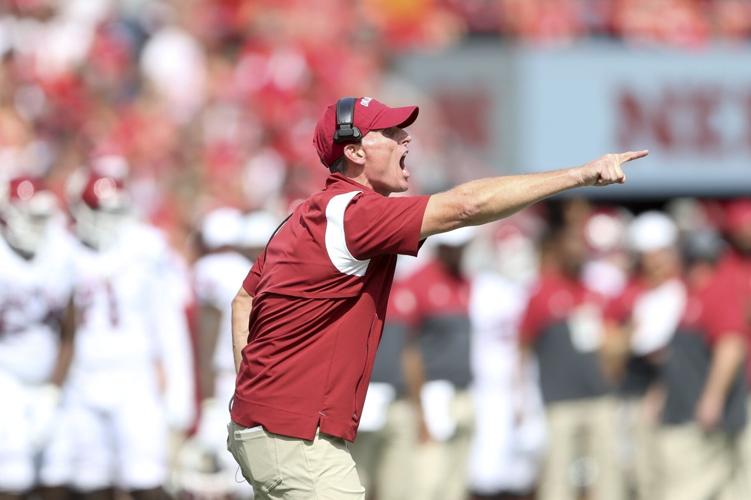 Oklahoma head coach Brent Venables yells to his players during Saturday's game against Nebraska at Memorial Stadium in Lincoln, Neb.

Kansas State coach Bill Snyder talks with head linesman Carl Johnson during the first quarter of a game against Kansas on Oct. 31, 1998, in Lawrence, Kan.

“That might have been the hardest of all of them,” Venables said Tuesday, “because of relationships and loyalty and the opportunities that were presented for me there.”

“Loyalty” is the operative word as we fit Venables’ feelings about Snyder, his first coaching mentor, into Saturday’s Oklahoma-Kansas State game, Venables’ first as OU head coach. Loyalty is as woven into Venables’ DNA as competitiveness.

Asked this week about his feelings for Venables, Snyder called his linebacker-turned-graduate assistant-turned linebackers coach at K-State in the ‘90s “caring,” “committed,” “hard-working” and “respectful” before landing on “extremely loyal.”

“Those values have carried over in Brent’s life from that time,” Snyder observed. “He has had so many opportunities to move from place to place. But once again his loyalty is something very special. He was loyal to Clemson and that program. He had so many offers, but I think Oklahoma was probably the only one that he would have responded to.”

When Stoops, the K-State assistant who encouraged Snyder to make Venables a GA in 1993, offered Venables the opportunity to coach linebackers and assist Mike Stoops as defensive coordinator on Stoops’ first OU staff in late December of ’98, loyalty pulled on Venables fiercely.

While Clemson’s defensive coordinator in 2019, Venables told Tigerillustrated.com he broke down crying after leaving a one-on-one meeting in Snyder’s hotel room the night before K-State’s Alamo Bowl against Purdue Dec. 29, 1998.

Something Venables didn’t say then about that 24-year-old inner turmoil:

“My mom, she’s telling me about loyalty,” Venables recalled Tuesday of his late mother, Nancy Schumaker, a guiding force until her 2005 passing. “Opportunities were given there for us, and I didn’t disagree. It was really hard.”

What swung the decision for Stoops and the Sooners?

“I knew I needed a tremendous amount of more growth,” Venables said Tuesday. “And I worried that if I had to just figure it out on my own, it was going to take longer. I’ll be honest. I wasn’t ready to be the defensive coordinator at that time.”

With Mike Stoops, then K-State’s defensive coordinator, certain to join his brother in Norman, Snyder was ready to have the then-28-year-old Venables take over the Wildcats’ defense.

Snyder studied Venables carefully in the eight years he went from walk-on linebacker to ace linebackers coach. He knew what he had.

“Being around him and seeing his commitment and his attention to detail, all those characteristics that I think are a good necessity for being a good on-the-field coach,” Snyder recalled. “Then his interaction with teammates indicated to me that he would be a good individual in regards to teaching intrinsic values. As I observed him as he went through our program, it was easy to see that he would be successful. Of course that’s why we wanted to keep him on as a graduate assistant when he finished school.”

And keep him on as coordinator in ’98?

“There’s that emotional feeling that you have when those that you think so highly of move on,” Snyder indicated. “But when they got to that point that they were so deserving, you wanted to see it. So it was with mixed emotions.

“You wanted to see him be able to take those steps.”

Venables figured he needed to take them, to glean some more under the defensive-minded Stoops brothers. It was still an agonizing decision.

Over the course of Tuesday’s press conference, Venables referred to Snyder as “brilliant,” “fabulous” and “a man of class and grace.”

He recalled his three-year GA apprenticeship and said of Snyder: “He always made me feel valued.” That’s about the highest praise you can offer a boss.

No wonder loyalty nearly won out 24 years ago.

“There’s a lot that went into that,” Venables said. “Went through prayer. Just trust in your instincts.”

Instincts and fate – Venables told Tigerillustrated.com that when he got off the elevator on his floor after meeting Snyder the night before the Alamo Bowl, he noticed the carpet and wallpaper were crimson — kicked in. Venables moved on.

Both men moved on. Neither got over the other.

Asked if he missed Venables, Snyder said: “We miss ’em all. I’m proud of ’em. As I’ve always indicated, I want them to develop into the type of individuals, not just coaches but people, that others would like to have in their program. If they did that, I would support them dramatically. And Brent is certainly one of those guys.”

Asked if Saturday would be difficult for him, Snyder said: “Well certainly I pull for individuals as much as teams. I’m pleased that the game is being played at Oklahoma and I’m not going. If it were here I’d be here watching it and that would be even harder.”

Venables made the tug his old coach has on him quite clear Tuesday.

He shared that he and Snyder exchanged text messages before and after OU’s victory at Nebraska last Saturday. Snyder wished him well toward getting win No. 4 the following week, before sending another text a little while later hoping he might wait two weeks before winning a fourth.

“He must have checked the schedule,” Venables grinned. “He said ‘not against us.’ I love the loyalty. No surprise. Amazing man.”

The most meaningful relationships prosper beyond their most tormented moments. That certainly goes for two head football coaches at Kansas State and Oklahoma, one retired, one just getting started but both perpetually intertwined.

“I admire Brent, the type of person he is,” Snyder said. “Certainly he’s been a highly successful football coach, but I think his manner and the quality of individual he is what sets him apart from so many.”

OU’s coaches may have changed, but the Wildcats have found a celebratory way to leave Norman with road victories in four of their past six visits.

Oklahoma head coach Brent Venables yells to his players during Saturday's game against Nebraska at Memorial Stadium in Lincoln, Neb.

Kansas State coach Bill Snyder talks with head linesman Carl Johnson during the first quarter of a game against Kansas on Oct. 31, 1998, in Lawrence, Kan.