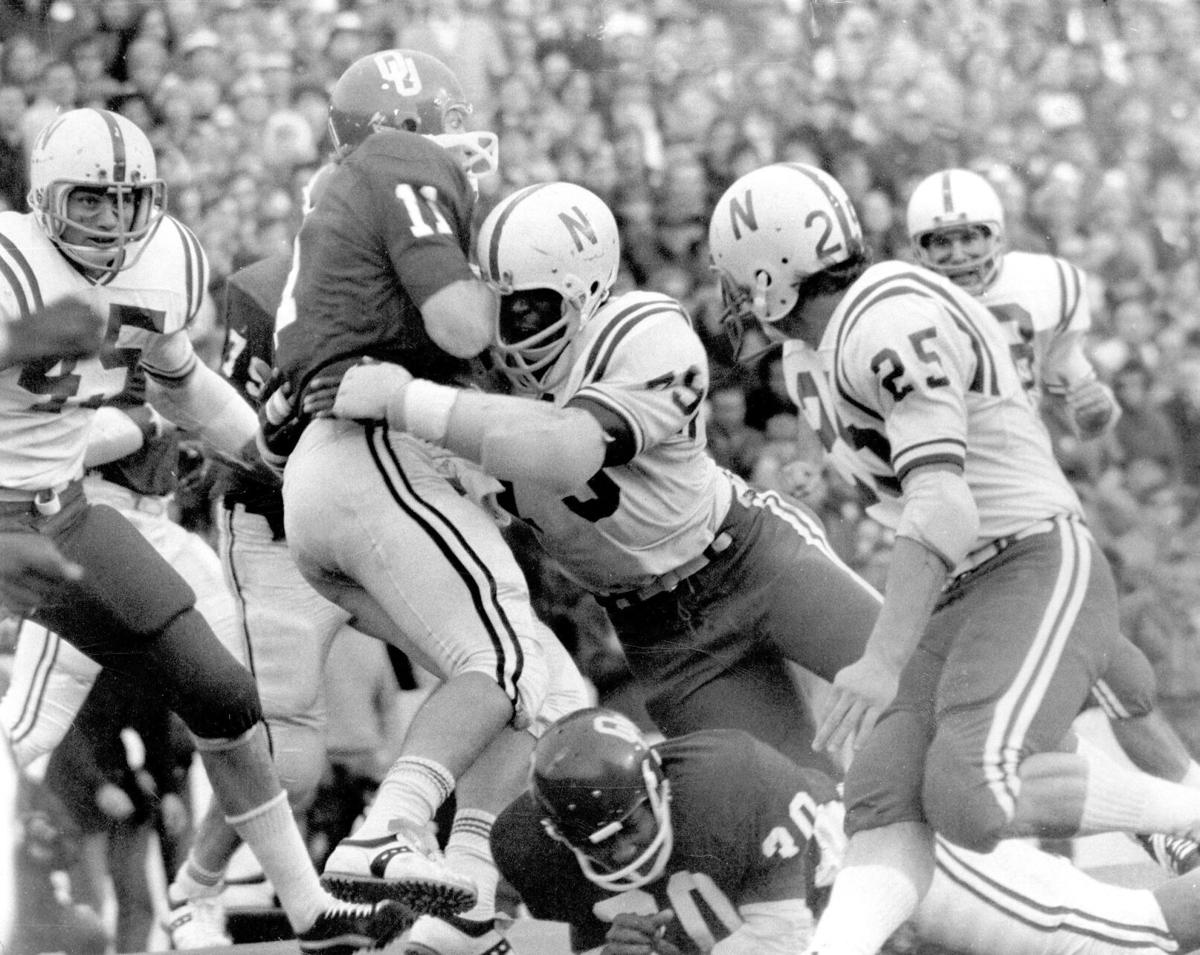 Nebraska’s Rich Glover (79) brings down Oklahoma quarterback Jack Mildren during the Game of the Century, on Nov. 25, 1971 in Norman. The Sooners and Cornhuskers will meet again this Saturday in Norman. 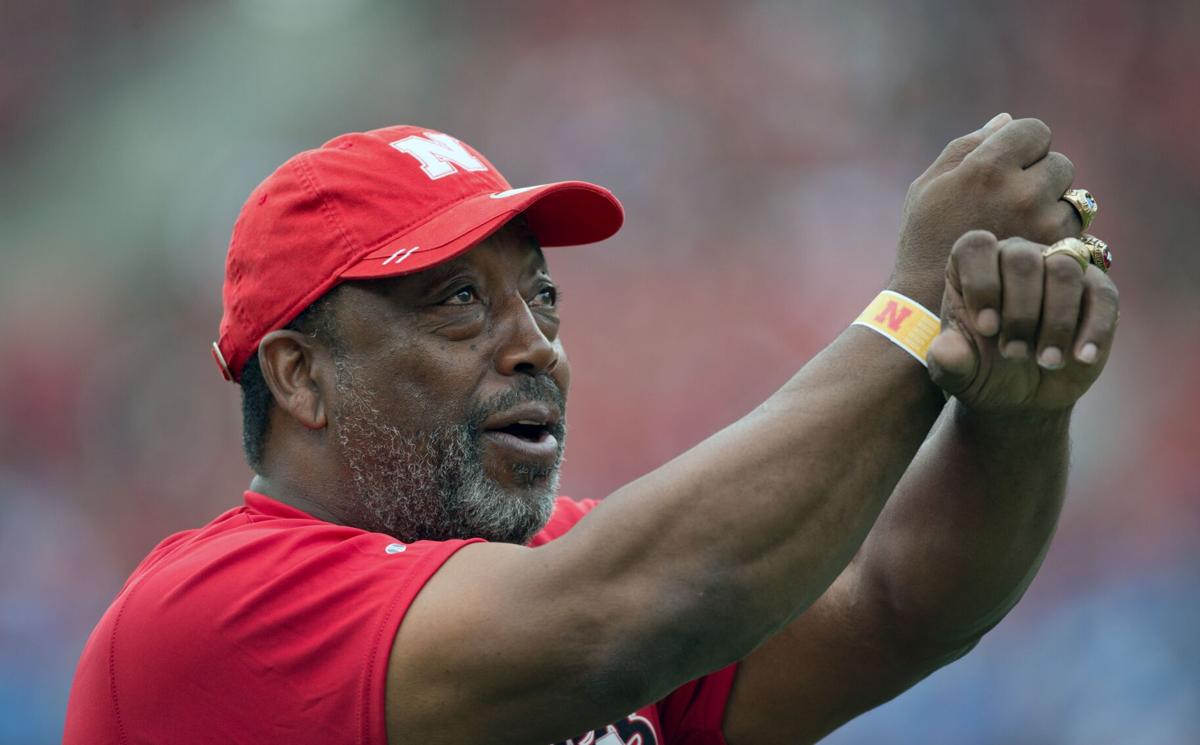 Former Nebraska football great Rich Glover acknowledges the crowd during a break in a game against UCLA on Sept. 14, 2013 in Lincoln, Neb. Glover will be in Norman on Saturday when the Cornhuskers face the Sooners.

Rich Glover is returning. An 800-mile drive from his home in Snellville, Georgia, to Owen Field in Norman.

If that sounds like a long way to come for a football game, in this case Saturday’s tussle between Oklahoma vs. Nebraska, this is more about 50 years of history than three hours in the present.

“I want to see how it is going back into the snake pit,” Glover says, “and renewing it in my mind.”

Masterpieces should be savored. Glover presented his Thanksgiving Day 1971, when he grabbed hold of the “Game of the Century” and didn’t unclench until his Huskers had triumphed.

The archives claim Glover made 22 tackles from his nose guard position. Nope. That isn’t right. That isn’t enough. Just watch the game on YouTube.

Watch Glover and you will see all of those Sooners, because all of them run smack into him. Then they go straight down. It is astonishing.

Fourth series, down goes Pruitt again and there goes the ball, the result of Glover’s paw poking at it for one of OU’s three fumbles.

“The game came down to those damn turnovers,” he says. “And we should have had Pruitt make something happen.”

I don’t believe Glover felt like allowing anything to happen. Or anyone.

He plugged the middle and erased OU’s fullbacks — his prime directive from Nebraska defensive coordinator Monte Kiffin — then started scraping off Brahaney, Jones and guard Darryl Emmert and running wide to hunt Mildren, the option-keeping quarterback.

“Glover wasn’t a massive guy,” Switzer says. “He was a runner. So quick. A great player. He had a hell of a game. He had to.”

The stakes dictated as much.

“Look what we were playing for,” Glover says. “The Big Eight championship, the Orange Bowl, the national championship, the best players in college football, Heisman guys, Lombardi guys... Things like that were all involved in that game.”

“As we were coming out to warm up before the game, they decided to run across us to go back into their locker room,” Glover recalls of OU antics. “Instead of waiting for us to come out, they bombarded us. ‘Wait a minute. They just disrespected us.’

“I had to take a picture with Tom Brahaney on the field before the game, a head shot. I just told him, ‘You don’t know what you’re in for today. I’m fired up.’”

Whatever the motivation, the finished product was defensive art. Seriously, watch the replay.

Last series of the second quarter, out goes the ball. Another OU fumble, this one by reserve fullback Tim Welch. Glover recovers.

Second play of the third quarter, down goes Crosswhite. Again.

“I don’t recall ever seeing a middle guard that so dominates an offensive team as Glover,” Wilkinson marvels.

On and on it goes, right through OU’s final play. Mildren drops back to his 7-yard line. Glover rushes angrily.

“The ball is knocked down by guess who,” play-by-play man Chris Schenkel narrates.

“We just knew we had to win that game,” Glover says. “It was a big one for coach (Bob) Devaney. It was a big game for all of us.”

Fifty years later, a few days before he hits that 800-mile road, Glover looks forward to reliving it this weekend.

He sees Brahaney and Switzer at College Football Hall of Fame functions, says he is friendly with both. He anticipates seeing them and other dignitaries invited to Norman for the anniversary celebration.

The stories should be fun. Maybe the game will be close. He hopes so.

At any rate, this is more about the past than the present. This is about appreciating excellence. Kinney, Mildren, Rodgers, Pruitt, Jerry Tagge, Jon Harrison. No. 1 vs. No. 2. A treasured piece of college football history.

Glover knew it the day it went down.

“This is the most exciting game I’ve ever played in,” he told ABC-TV on the field postgame.

He savors it still.

Masterpieces do awe us. The Sooners and Huskers played in one 50 years ago.

Rich Glover, he played one.

Throwback Tulsa: OU hosts Nebraska in 'Game of the Century' in 1971

Nebraska at No. 3 OU

Nebraska’s Rich Glover (79) brings down Oklahoma quarterback Jack Mildren during the Game of the Century, on Nov. 25, 1971 in Norman. The Sooners and Cornhuskers will meet again this Saturday in Norman.

Former Nebraska football great Rich Glover acknowledges the crowd during a break in a game against UCLA on Sept. 14, 2013 in Lincoln, Neb. Glover will be in Norman on Saturday when the Cornhuskers face the Sooners.