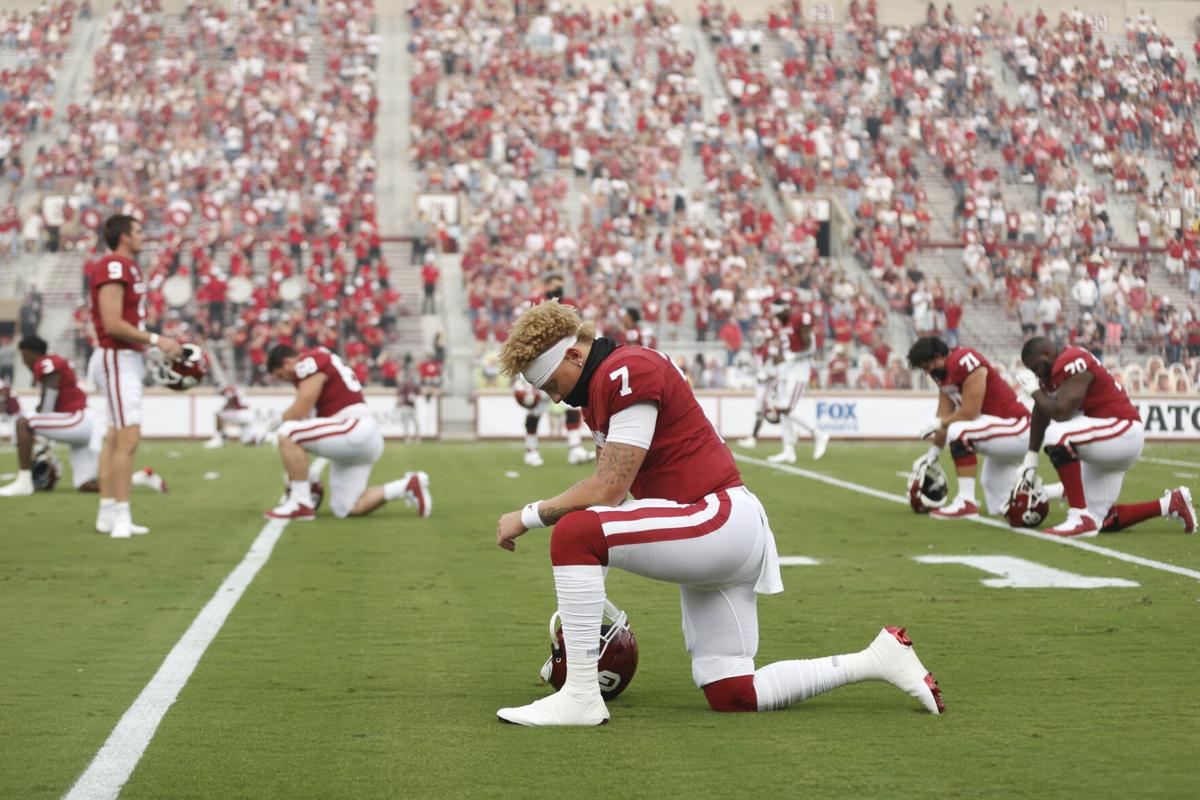 Oklahoma quarterback Spencer Rattler kneels while teammates run past before the Sooners’ game Sept. 12 against Missouri State at Memorial Stadium in Norman. 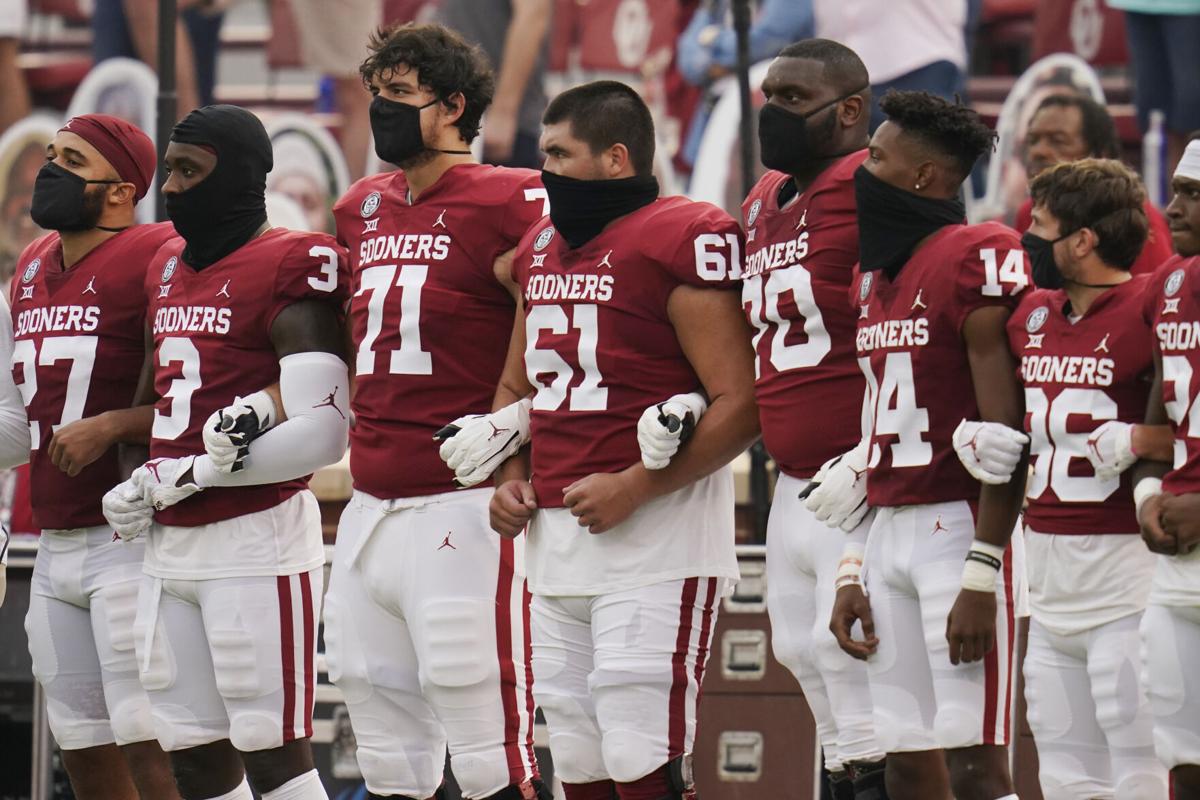 Oklahoma players join together to show unity before their season-opener Sept. 12 against Missouri State. 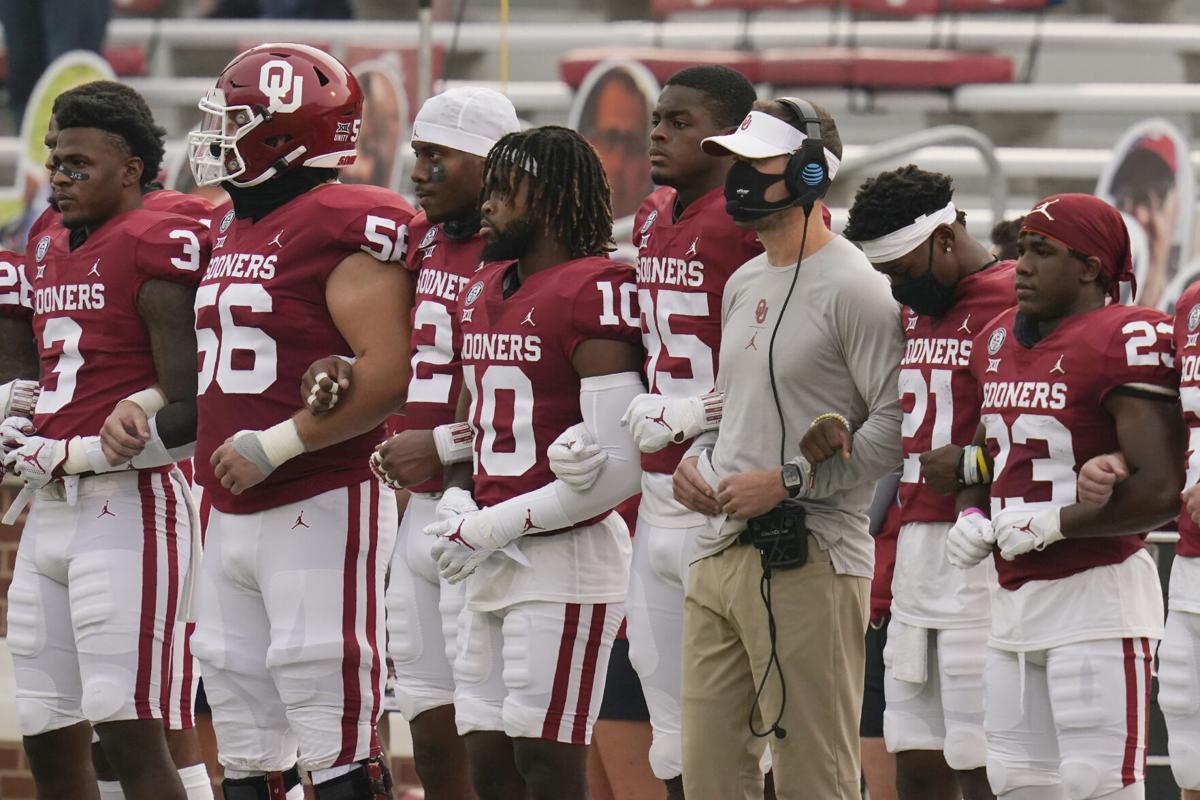 Here is a timeline of hope.

On Sept. 9, the week of OU’s season opener against Missouri State, I recalled Thomas’ message and asked him about it.

“I felt that way after everything we’ve been seeing about social injustice going on for African Americans,” the Memorial High School alum said. “Doc Rivers said it best: ‘We love a country that doesn’t love us back.’

The very next night, some among the select fans attending the Kansas City Chiefs’ NFL opener against Houston booed the Chiefs as they locked arms several minutes before kickoff in recognition of a Black Lives Matter movement video that played, then jeered Chiefs and Texans who came together during a pregame showing of unity.

On Sept. 12, the Sooners came together. They locked arms along their sideline just before kickoff as the stadium video board showed an announcement from OU players supporting racial justice.

The video ended. Several fans at Owen Field cheered. Others applauded respectfully. Nobody that I could hear carried on like Arrowhead Stadium 48 hours previously.

Nobody, and this is more important, the Sooners could hear, either.

“We’ve seen what’s been going on throughout this summer with social injustice, so we took it upon ourselves to show that we stand for unity,” Thomas said in postgame. “We stand for everything that is right. So for the crowd to be along with that, and for the crowd to accept what we were doing, it was like a confidence booster.

“Like, OK, we’re making a step in the right direction.”

This was a step toward something that should have been accomplished long ago but hasn’t because when the country isn’t in turmoil we narrow our focus simplistically. We view sports as athletes playing games. That’s about it. The players aren’t human beings so much as pawns of fans’ pleasures.

OU’s pregame moment was a step toward those fans recognizing athletes, whether in Norman, Stillwater or anywhere else, as fully formed human beings capable of concerns far more important than blitzing the A-gap on third-and-9.

“I know a lot of people see me as Chuba Hubbard the football player and they see stuff on social media,” Chuba Hubbard the person said during a recent Oklahoma State Zoom session with reporters. “But a lot of people don’t actually know who I am. I’m someone that ... I’m a caring person. I care a lot about my teammates. I care a lot about people I don’t even know. I’m always trying to be for the greater good.”

Hubbard gave Oklahoma State fans a peek at his dimensions in the offseason when he pushed back against his head coach and a county district attorney over what he viewed as insensitive actions, Mike Gundy’s wearing a One America News Network T-shirt in the first case, David Prater’s perceived mistreatment of social justice demonstrators in the second.

The vast majority of OSU’s base recognized Hubbard’s right and willingness to speak out, even if some disagreed with him in either case. This, too, was progress.

The problem was, and remains, the minority who either can’t or won’t understand that 20-year-old football players see well beyond their face masks. They are young men of substance beyond their abilities to earn athletic scholarships.

Kolby Harvell-Peel understands. Last week, the OSU safety spoke about his music as excitedly as he did the Cowboys’ season opener against Tulsa.

“It’s what I talk about on Twitter,” Harvell-Peel said. “We’re more than just athletes.”

Aug. 10, Harvell-Peel tweeted: “We are human beings ...” while also supporting a tweet from OU wide receiver Jadon Haselwood that read: “It’s funny we have the power now and fans agree to us trying to play through a PANDEMIC (which no one is excused from) but when student athletes speak on how we should be paid more they tell us to shutup and take a free education.”

The point isn’t for fans, now trickling back to college football since games have returned, to agree with everything the players say. Just stop with the “shutup.” See the players as people. Respect them as such.

Understand that the likes of Hubbard, Harvell-Peel, Thomas and Haselwood deserve that respect, and support, for things other than helping the Cowboys and Sooners win games.

OU cornerback Tre Brown put it this way the week of the Sooners’ opener: “We’ve got lives outside of our jerseys.”

“I feel like what people need to do better is understand. Try to understand. That’d be the easiest thing to do for someone who’s not in my shoes.”

Three nights later at Owen Field, we saw some understanding. Some progress. Some hope.

“It felt good, especially seeing across the world that not every situation like this has been smooth sailing,” OU linebacker DaShaun White noticed. “Whatever our fans did, start cheering, I even heard guys say, ‘This is how it’s supposed to be.’”

Riley trades OU for USC, and now Joe Castiglione and whoever he hires next have hellacious jobs to do.

Who appears to be following Riley to USC? Plus a sign displays some thoughts of Sooner Nation on OU's campus.

Riley's decision to leave OU for USC shows SEC isn't for everybody. What Sooners' athletic director must do is convince replacement candidates it's for them.

It was the first public words by the school since releasing a statement confirming Lincoln Riley’s departure to USC.

OU ended with 441 yards — the most allowed by the Cowboys this season — but struggled after halftime.

What kind of coach is Oklahoma looking for?

“The type of coach we’re looking for is like Coach Stoops or Lincoln Riley. That’s the kind of coaches we hire in our program,” athletic director Joe Castiglione said.

Cincinnati coach Luke Fickell was asked by the Tulsa World if rumors linking him to OU is a distraction; and recruits are currently decommiting to the OU program.

Oklahoma quarterback Spencer Rattler kneels while teammates run past before the Sooners’ game Sept. 12 against Missouri State at Memorial Stadium in Norman.

Oklahoma players join together to show unity before their season-opener Sept. 12 against Missouri State.