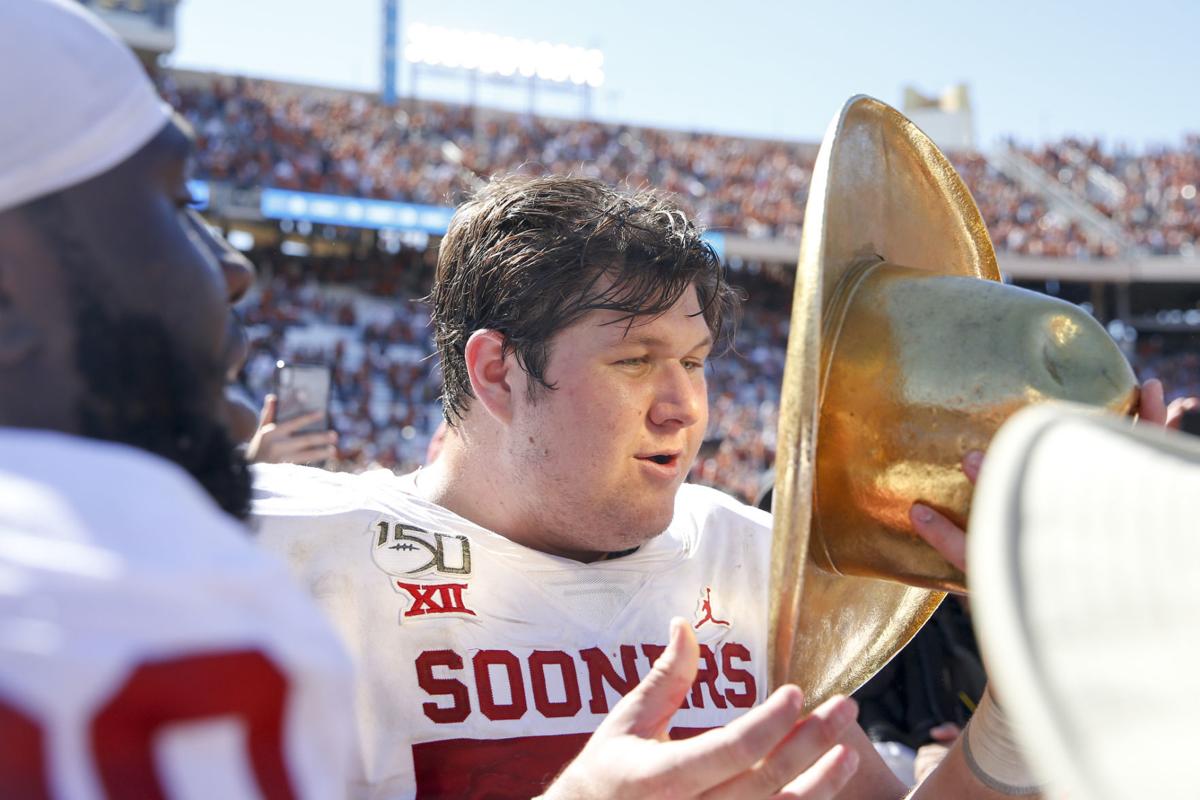 Oklahoma center Creed Humphrey (center) is the fifth member of the Sooners' 2018 offensive line to be taken in the NFL draft. 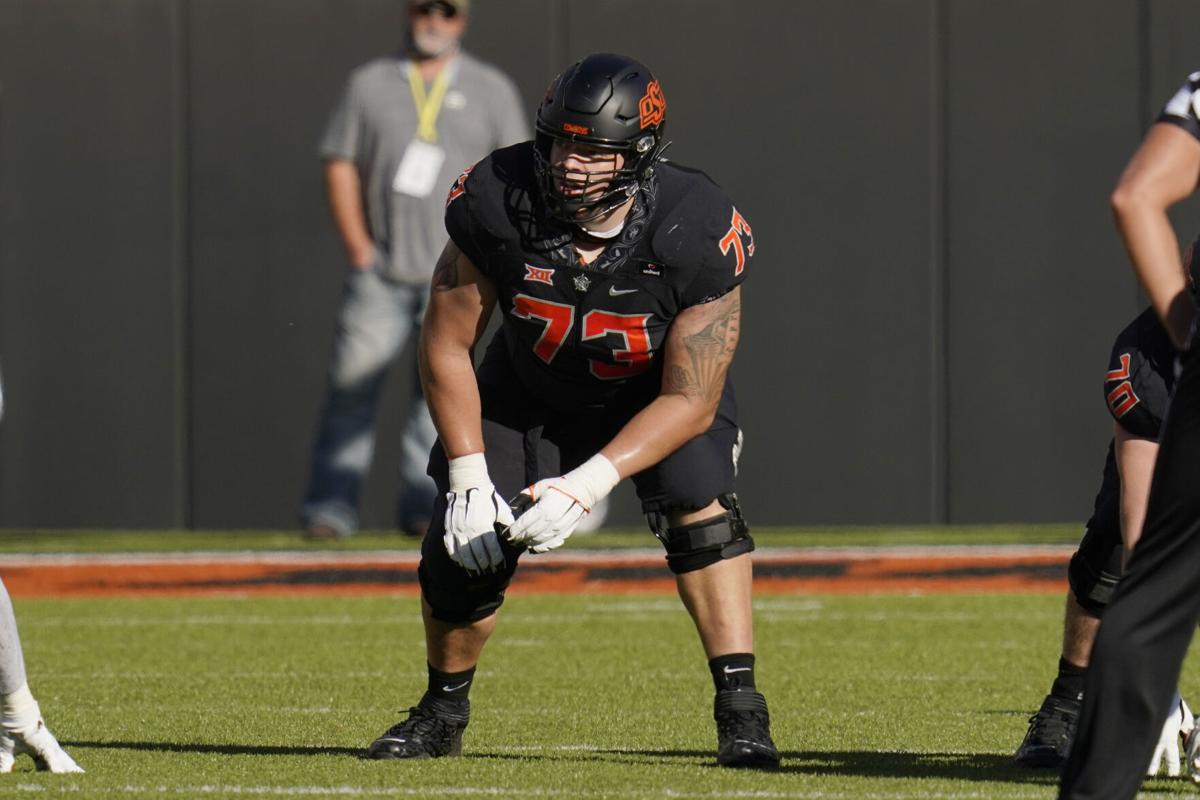 Oklahoma State offensive lineman Teven Jenkins was drafted by the Chicago Bears in the second round of the NFL draft on Friday.

Oklahoma’s Creed Humphrey was in his hometown when he learned that the Kansas City Chiefs selected him in the second round of the 2021 NFL draft. The center was the No. 63 overall pick and the first OU player selected in this year’s cycle.

During his introductory news conference, Humphrey was asked about growing up “country strong” in Shawnee.

“It’s something I’ve always played with,” Humphrey said. “It’s something that’s helped me win a lot of matchups. I’m definitely excited to come in and start competing and start helping this team get better.”

Oklahoma State’s Teven Jenkins is headed to Chicago after the offensive tackle was taken with the No. 39 overall pick in the second round. He is the first OSU offensive lineman to be drafted since Russell Okung was drafted No. 6 overall by the Seattle Seahawks in 2010.

OU’s Ronnie Perkins, an edge rusher, was selected by the New England Patriots in the third round. He was taken with the No. 96 pick overall.

Between 2007 and 2019, Oklahoma’s defense only had three players chosen in the first three rounds.

With Perkins’ pick by the Patriots, Oklahoma has now had three defensive picks inside the first three rounds over the past two seasons.

Perkins was dominant for the Sooners despite only playing six games. He finished with seven tackles for loss, including 5.5 sacks. His playmaking ability strengthened the OU defense down the stretch.

The biggest question entering the draft wasn’t what Perkins could do on the field. It was his situation off the field. He missed the 2019 season’s Peach Bowl after testing positive for marijuana. He was suspended by the NCAA for the College Football Playoff contest as well as the first five games of the 2020 campaign.

“Ronnie was a leader and impact player in our program for the last couple years. He’s really developed into an outstanding edge player,” OU coach Lincoln Riley said. “He’s equally good in pass rush as he is in defending the run game. He plays with an edge and an attitude that really takes a guy who’s talented and transforms him into becoming an even better player. I think he’ll certainly be a guy who will create a lot of problems on the edge at the next level for the Patriots.”

Humphrey’s selection was huge news in Shawnee, with mayor Ed Bolt one of the offensive lineman’s biggest fans.

“Creed checks all the boxes for an NFL team. He’s so big, so agile, intelligent and a hard worker. He absolutely can’t miss. It’s like drafting Michael Jordan or Larry Bird. It’s money in the bank,” Bolt said. “He’s proven that down at OU with the way he’s performed there. An NFL team will know they will get their money’s worth. He’s like death and taxes. He’s as reliable as they come.”

While many high draft picks displayed designer suits and had big home parties during Thursday’s first-round, Humphrey tweeted a picture of him wearing a hat featuring the late rodeo star Lane Frost in front of trays of wings.

Humbleness isn’t a recent trait. It followed him from Shawnee High School.

Humphrey is Shawnee’s first NFL draft pick since 1993. Cornerback Darrien Gordon attended Stanford and was a first-round pick by the San Diego Chargers. He was a two-time Super Bowl champion while playing for the Denver Broncos.

“Creed was certainly one of our leaders the last couple of years. He stuck out early in his career, became the starting center and developed into a really good all-around player and a good leader,” Riley said. “He’s certainly one of the more talented offensive linemen we’ve had come through our program. I think he’ll have a long and very positive career in the NFL.”

Humphrey’s selection also allows a final grade for the winners of the 2018 Joe Moore Award, which is presented to the nation’s top offensive line.

Humphrey is the eighth OU offensive lineman drafted under line coach Bill Bedenbaugh over the past seven seasons.

Humphrey is the 17th center to be drafted in OU history and the first at the position to be selected since 2006 when Chris Chester was taken in the second round by Baltimore.

The three-day draft concludes on Saturday when rounds 4-7 will be announced.

Should there be concern around the Yankees?

Should there be concern around the Yankees?

Oklahoma center Creed Humphrey (center) is the fifth member of the Sooners' 2018 offensive line to be taken in the NFL draft.

Oklahoma State offensive lineman Teven Jenkins was drafted by the Chicago Bears in the second round of the NFL draft on Friday.