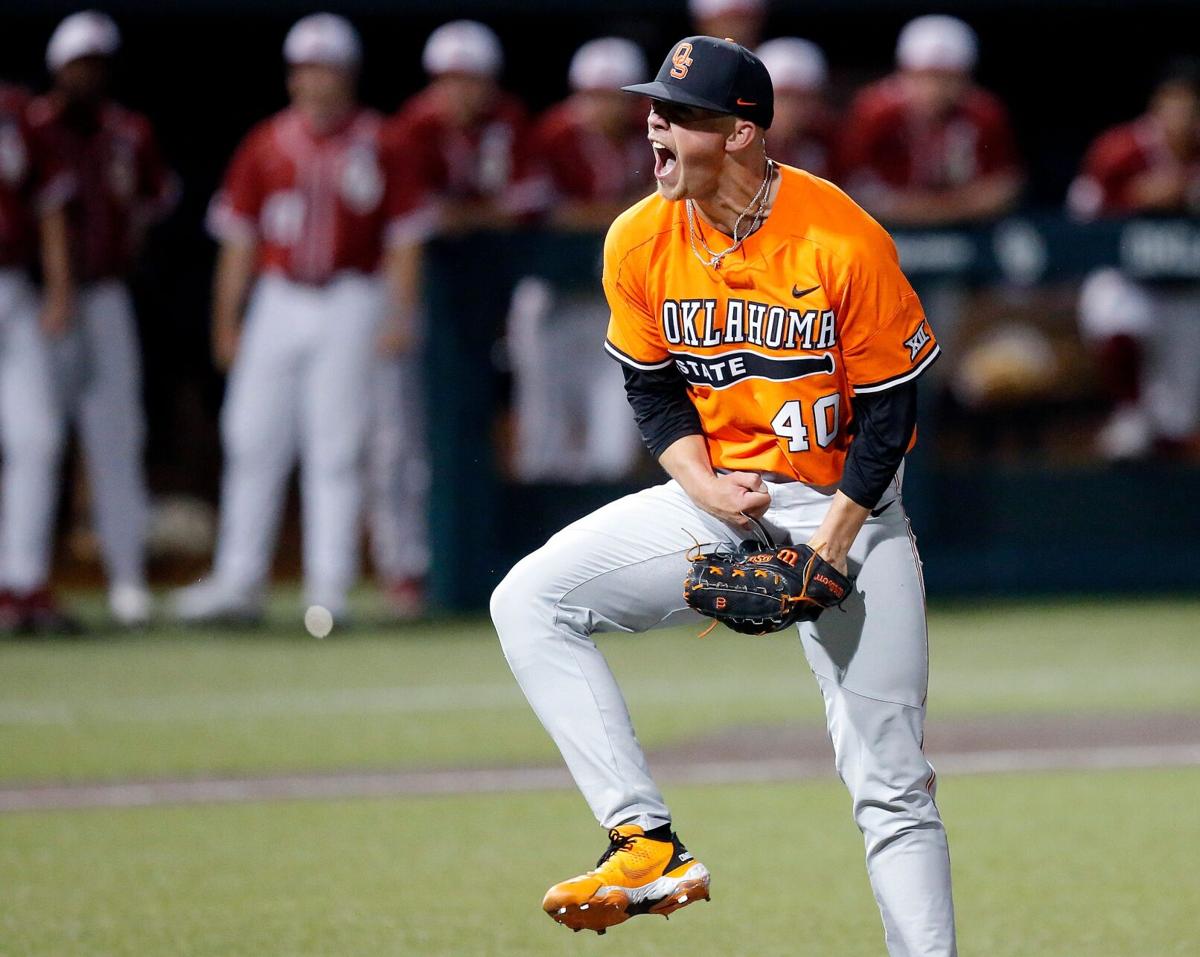 Oklahoma State’s Kale Davis celebrates the last out of the Cowboys’ Bedlam baseball win against Oklahoma on Sunday at L. Dale Mitchell Park in Norman. 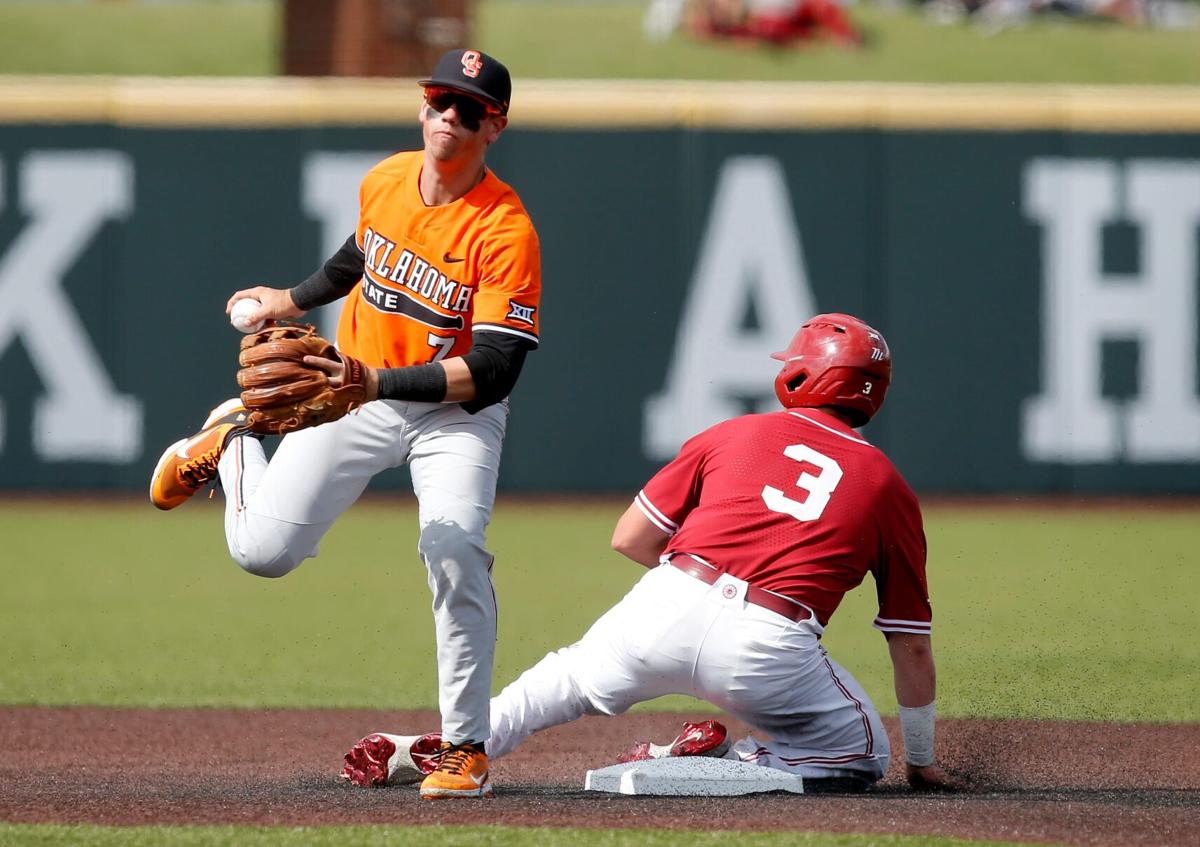 OU's Jimmy Crooks (right) and the Sooners had a 4-1 lead in the second inning and a 7-5 lead in the ninth, but Max Hewitt (left) and the OSU Cowboys rallied for an 8-7, 12-inning victory on Sunday in Norman.

NORMAN – When I parked at the Lloyd Noble Center, located about three football fields south of OU’s L. Dale Mitchell ballpark, my truck was positioned near a black sedan scarred by at least a hundred hailstone dents.

Last week, the Norman community was gashed by a violent and very expensive storm that dented or destroyed countless vehicles. The people who do roof and siding repair will be flooded with work over the next few months.

While the outcome of a ballgame won’t undo storm damage, Norman residents needed a pick-me-up of sorts.

On Friday and Saturday, they got it from an unexpected source — from an OU baseball program that before the weekend was 20-19 overall, 4-8 in the Big 12 and had an official NCAA RPI ranking of 95th.

In a Bedlam series that would count in the conference standings, the Sooners had a beautiful Sunday opportunity: a chance to score a three-game conference sweep of an Oklahoma State club that had been 16th in the RPI.

On Friday, at OSU’s phenomenal new O’Brate Stadium, the Sooners won 16-2 as OU’s Tyler Hardman had twice as many runs batted in (six) as OSU had base hits. Not since 2014 had the Sooners won a baseball game in Stillwater.

On Saturday in Norman, the Sooners won 6-2 as Jason Ruffcorn recorded 10 strikeouts during an extended relief appearance.

On Sunday, as L. Dale Mitchell Park attendance was limited but all tickets were sold and several hundred fans watched from blankets beyond the outfield wall, OU was on the brink of a special outcome.

In the second inning, as Conor McKenna lofted a wind-aided, three-run home run, OU had rolled to a 4-1 advantage. There was a ninth-inning Sooner lead of 7-5 — and then there was an infield error that led to Oklahoma State’s two-run rally and extra innings.

At the end of a four-hour, 42-minute Bedlam clash that was riveting but too messy to be remembered as a classic, Oklahoma State danced out of here with an 8-7, 12-inning triumph.

For OSU in the 12th, the third of Carson McCusker’s three hits was followed by a Cabe Cabbiness single. With two out, Cowboy catcher Brock Mathis blooped a single to center and McCusker scored the go-ahead run.

As a day game became a night game, right-hander Kale Davis was OSU’s sixth pitcher. Heroic in long relief, he sacked the Sooners with a 1-2-3 final inning.

This was big for Oklahoma State not only because Josh Holliday’s team dodged the embarrassment of a Bedlam sweep, but because these Cowboys really needed a slump-busting performance.

Maybe OSU takes fresh momentum to Kansas next weekend, and maybe OSU sustains momentum beyond that.

For OU, there has to be at least some value in take two of three from OSU. This is a Sooner team that gave up 32 runs in a pair of losses to Arizona, and gave up 15 runs in a home loss to Arkansas State.

It’s a reasonable question: On a more consistent basis, why can’t OU baseball be like it was on Friday and Saturday?

Most OU programs contend annually or at least occasionally for national championships, and yet by Sooner standards, OU baseball has been mostly average for a long time. There are winning records, but not much in the way of postseason success.

There does remain one more Bedlam game this season — a May 11 nonconference reunion at Tulsa’s ONEOK Field.

When the Skip Johnson-coached Sooners see Oklahoma State uniforms across the diamond in downtown Tulsa, they’ll be reminded of the grand opportunity that slipped away here on Sunday.

If not for the infield error mentioned in the ninth paragraph, Norman probably would have been a happy town on Sunday night. OU probably would have gotten to the finish line with its first Bedlam sweep since 2000 – a season during which many of these participants weren’t even born.

Guerin-teed it was quite a week: OU football will be fine, but can we say the say the same for two former Sooners?

The Norman Police Department confirmed to the Tulsa World that they had applied for arrest warrants for Trejan Bridges and Seth McGowan in regard to an April 15 incident.

Bill Haisten: Will we get a normal football season? ‘I think it’s realistic,’ Dart says

Bruce Dart's message: “If you want to be safe and get back to normal as quickly as possible, get vaccinated."

Oklahoma outlasted Oklahoma State in a sloppy game inside a capacity-filled Cowgirl Stadium.

After two tense, marvelous games, Sooners and Cowgirls will play one more for the Big 12 championship... as they should

ONEOK Field can now hold about 65% capacity, which equals to a little more than 5,000 fans for Tuesday's Bedlam contest.

There are a number of former Sooners, Cowboys across pro rosters, making upcoming fall Sundays as intriguing as they have ever been

Oklahoma's recent draft success insulates Riley some while recruiting, but you can bet prospects he's after hear about Big 12's draft failures

Obialo’s playing career began with a one-year stop at Oklahoma State. After three successful seasons at Marshall, he joined the Sooners as a graduate transfer in 2020.

The Sooners are 42-2 this softball season, including a 16-1 conference record.

Oklahoma State’s Kale Davis celebrates the last out of the Cowboys’ Bedlam baseball win against Oklahoma on Sunday at L. Dale Mitchell Park in Norman.

OU's Jimmy Crooks (right) and the Sooners had a 4-1 lead in the second inning and a 7-5 lead in the ninth, but Max Hewitt (left) and the OSU Cowboys rallied for an 8-7, 12-inning victory on Sunday in Norman.