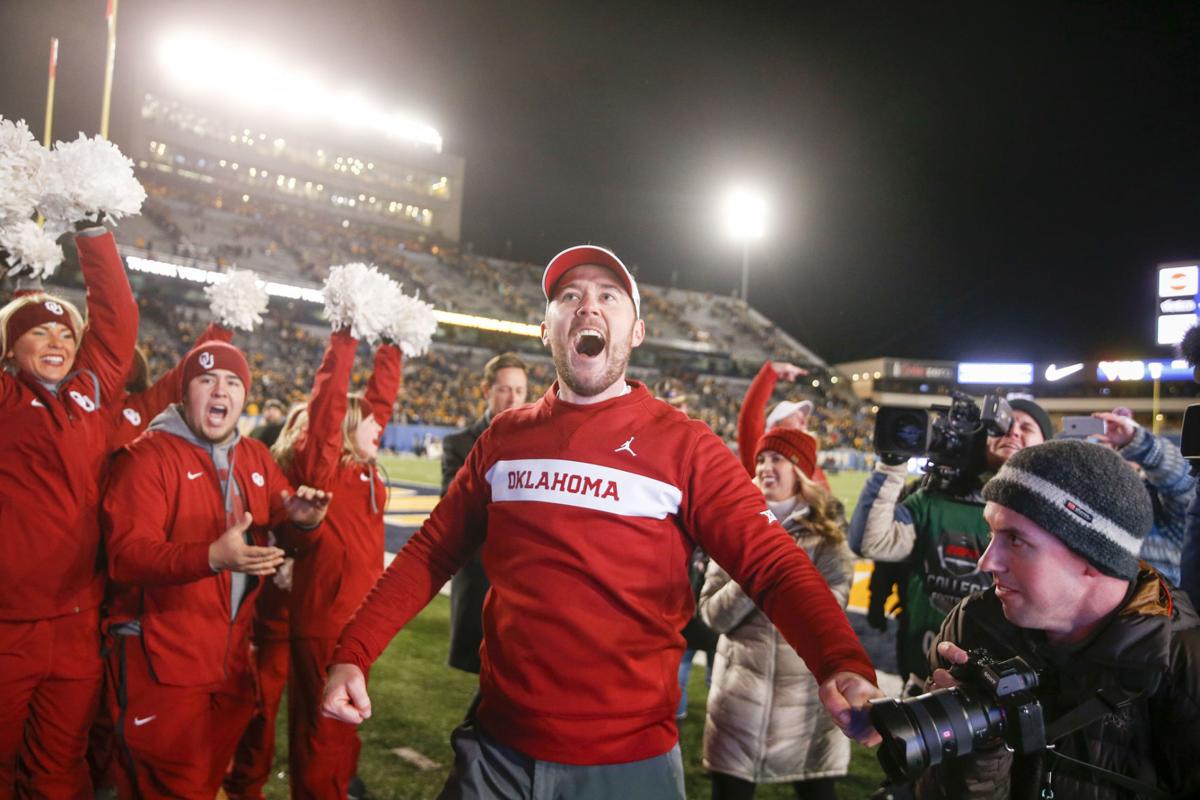 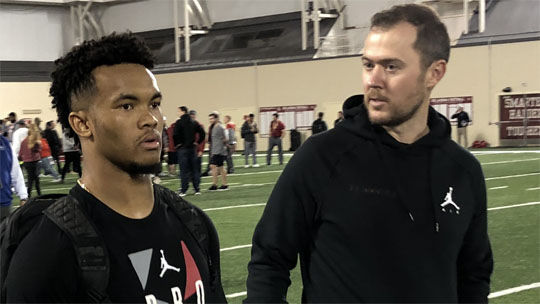 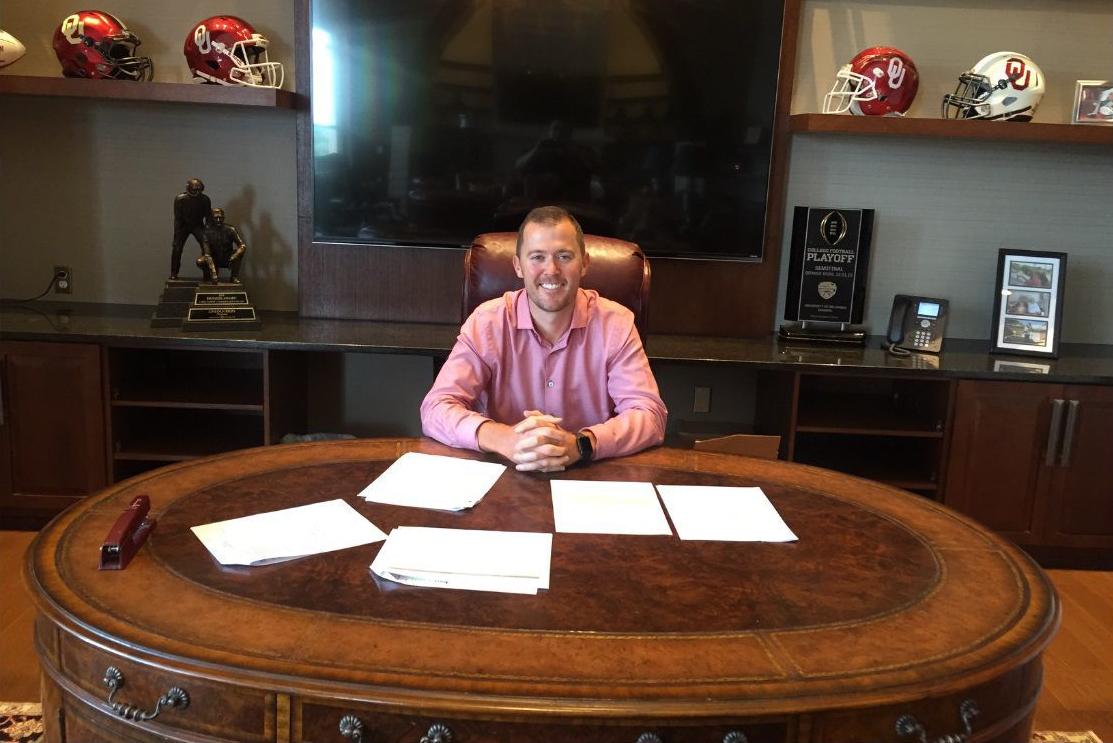 Lincoln Riley poses for a photo from his office in 2017. ERIC BAILEY/Tulsa World

Lincoln Riley poses for a photo from his office in 2017. ERIC BAILEY/Tulsa World

NORMAN — For a Friday interview, I was in Lincoln Riley’s office for the first time.

It’s a beautiful, spacious room in which you could very impressively host a recruit or have lunch with the type of donor who helps sustain the University of Oklahoma football machine.

“You know,” I said, “you could actually live in this office.”

Riley’s response: “I kinda do live in this office.”

Related: Room 3116 is the program’s epicenter. There is an open-door policy for OU’s players. Need to discuss something? Walk on in.

In April, Riley did get out of the office for a few days. He was in Tennessee to witness exactly what he had witnessed one year earlier: the No. 1 selection overall of a Sooner quarterback in the NFL draft.

While Kyler Murray was the star of that Nashville weekend, Riley got a lot of national face time. By extension, it was a big weekend for the OU brand.

During an appearance on the NFL Network’s “Good Morning Football” show, Riley was interviewed by Peter Schrager and former NFL wide receiver Nate Burleson (a rising star in the TV business).

Schrager: “We’ve got 60 seconds on the clock. Lincoln Riley, make your pitch as to why Nate Burleson should come and be the next great Oklahoma wide receiver.”

Riley placed his hand on Burleson’s shoulder and said, “Nate, have you watched the last two drafts?”

Riley’s foundation is a combination of offensive football expertise and personality. Within a span of only five years, Riley graduated from having been East Carolina’s $275,000-a-year offensive coordinator to OU’s third-year head man at a 2019 salary of $6 million.

He seems to be an exceedingly pleasant, normal guy. He occupies a position of power, yet doesn’t appear to be on a power trip. He seems mostly unchanged by his circumstances, and his circumstances have been extraordinary.

With the Sooners, Riley coached two transfer quarterbacks — Baker Mayfield and Kyler Murray — and came close to running the table on the best possible results. Each QB won the Heisman Trophy while driving OU to the Big 12 title and the College Football Playoff.

Now, there is yet another transfer quarterback – former Alabama starter Jalen Hurts, currently rated on Las Vegas boards as the No. 3 favorite for the 2019 Heisman.

If it was immeasurably improbable to get back-to-back Heisman performances from transfer quarterbacks, how crazy would it be for Hurts to become a third consecutive Heisman Sooner?

If OU gets a Heisman performance from a quarterback who was demoted at Alabama, an NFL team might literally hand a blank check and complete organizational control to Riley. If Kliff Kingsbury thrives with Murray and the Arizona Cardinals, the NFL view of Riley would skyrocket to the ultimate level.

No one knows where Riley might be in five years, but this is where he was last week: in a quarterbacks meeting that included Spencer Rattler. The celebrated recruit from Phoenix has gotten settled in Norman.

Instead of coaching a quarterback who started at Texas Tech (Mayfield), Texas A&M (Murray) or Alabama (Hurts), Riley gets a five-star prospect at the starting line of his college career.

“Spencer and I have a great relationship,” Riley said. “I recruited him longer than any other player I ever recruited. It started before I was the head coach – when I could get out and recruit a lot more.

For Rattler, 3½ years is about 20 percent of his life so far.

“Yeah,” Riley replied. “Think about that.”

OU has three quarterbacks – Hurts, Tanner Mordecai and Rattler – who are at completely different places in their football lives. When Hurts was a freshman with the Crimson Tide, Rattler was a 10th-grader.

Is there a specific instruction plan for each QB? Or is the approach universal? As injuries are the ultimate situation-changer, each Sooner quarterback has to be ready to win a game.

“It’s definitely more specific,” Riley explained. “There is general information that they all need, but they’re all different types of guys. Coaching Kyler Murray was different than coaching Baker. They all learn and process things differently.”

As it pertains to quarterback health, Riley has been incredibly fortunate. At East Carolina, he had record-setting QB Shane Carden for three seasons. At OU, Riley had Mayfield for three seasons, with Murray on deck as a 69 percent passer and 1,001-yard rusher.

Even before learning the Riley system, and only a few days after he graduated from high school, Rattler probably believes he is the best quarterback on the Oklahoma roster. That bundle of belief and ability is why Riley recruited him for 3½ years.

That’s the challenge now for Riley – to manage the expectations of a superstar recruit who has been the most important player on every team he’s been a part of.

“When you recruit a guy, you’re evaluating character, also,” Riley said. “You want a guy who believes he’s the best guy, but you also want a guy who’s a team guy and a reasonable guy. Guys who lack reason are the ones who after one week pack up and transfer.”

After transferring to OU, Mayfield sat for a year. Murray waited two years before he was the man.

“It’s been a great example not just for our quarterbacks, but for all of the guys in our program,” Riley said. “If a guy feels entitled in some way, he can look at two Heisman Trophy winners who had to wait their turn.

“You’re not entitled to anything. You have to earn it.”

As OU’s coordinator and head coach, Riley forged a culture that would be attractive to a 28-start transfer (Hurts), to the nation’s highest-rated high school quarterback (Rattler) and to some of the more dynamic receivers, running backs and offensive linemen in college football.

Riley didn’t get that beautiful office, $6 million and Rattler’s letter-of-intent signature because he’s a nice guy. Riley got it because he earned it.

Get your All-World Awards tickets for the June 22 event celebrating high school athletics at allworldawards.com.

Photo gallery: Here are the 2018-19 fall and winter sports finalists for the third annual All-World Awards in June

Lincoln Riley on Tiger Woods: "I was 13 (when Woods won the 1997 Masters), and I remember watching every shot of it.”