Bill Haisten: As the MAC makes a difficult decision, it now feels inevitable – no fall football
Share this
Return to homepage × 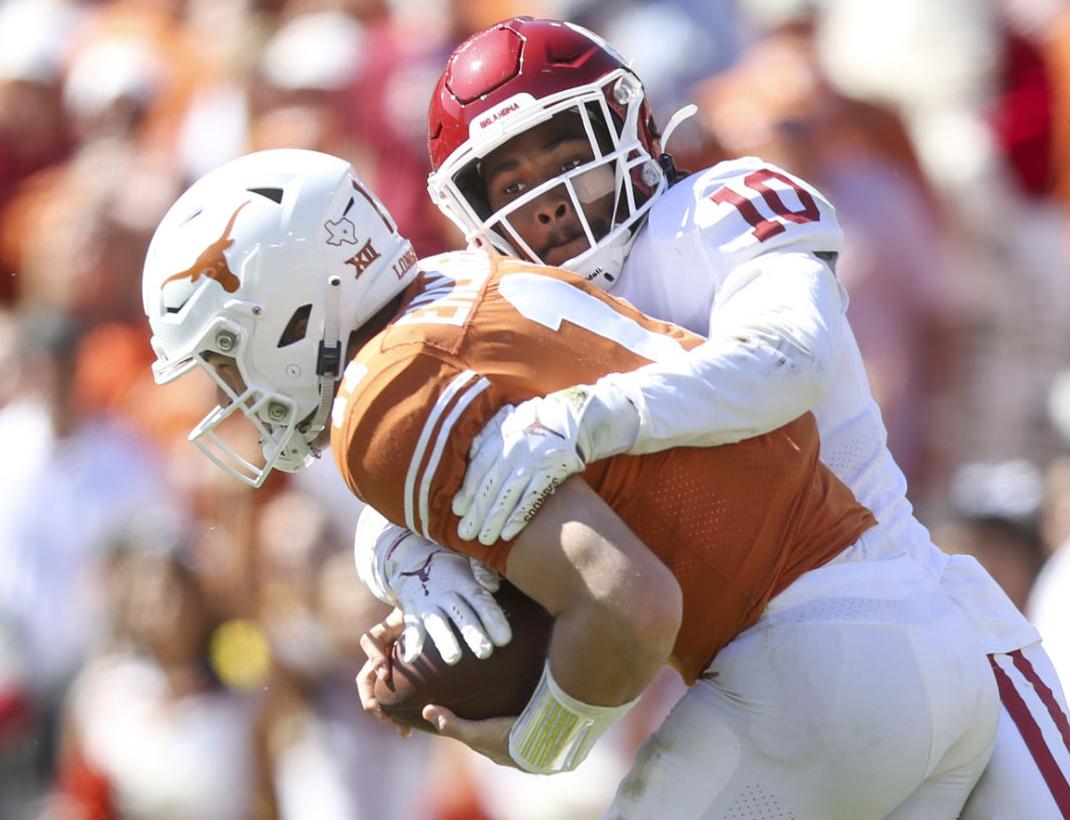 OU’s Pat Fields sacks Texas’ Sam Ehlinger during last year’s Red River Showdown. If officials decide against having a fall season, there would be no October game between the Sooners and Longhorns. IAN MAULE/Tulsa World file 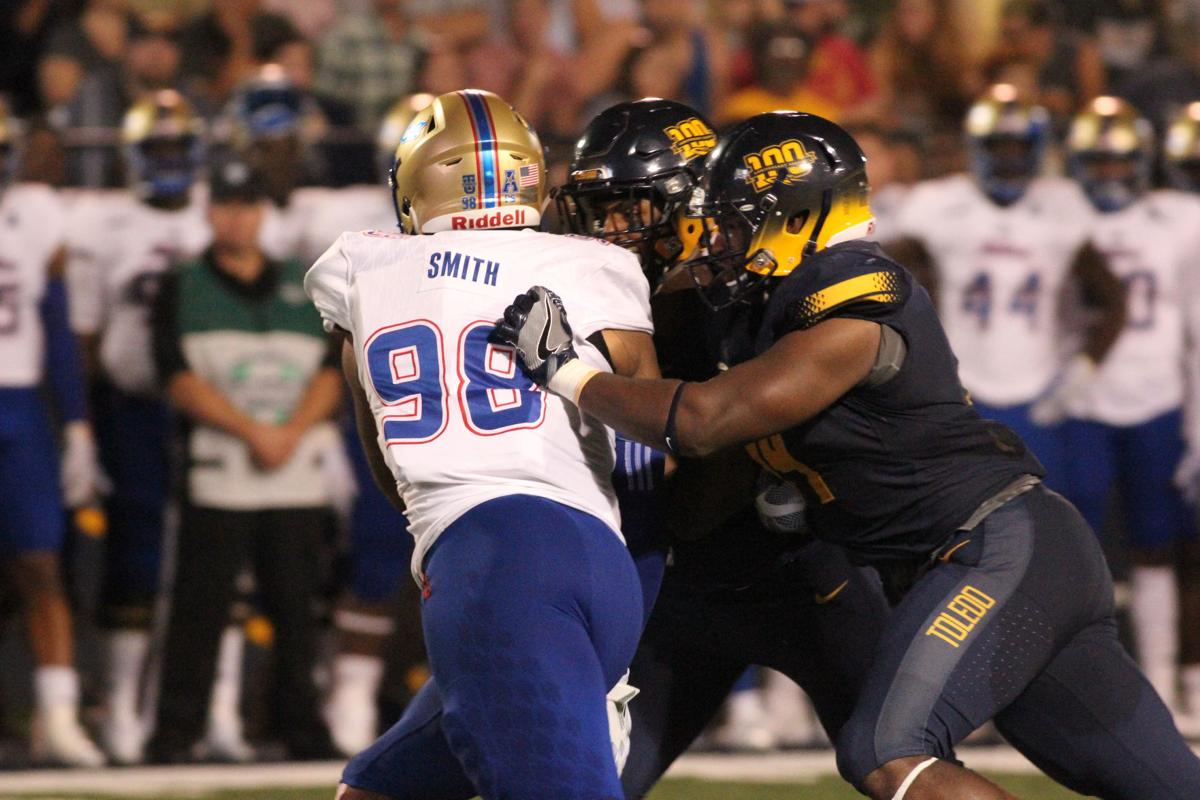 Tulsa defensive end Jeremy Smith goes around a pair of Toledo blockers in a 2017 game in Toledo, Ohio. Toledo was supposed to open the season Sept. 5 at Tulsa, but on Saturday its conference postponed all fall sports to the spring. Eric Upchurch/for the Tulsa World, file

As the Mid-American Conference announced on Saturday that it won’t have fall football, the tone of college football expectations and speculation has completely changed.

On social media, more response centered on the Power Five conferences than on the MAC. As in, will the MAC decision compel the Big 12, SEC and other major conferences to reconsider their plans to play in a few weeks?

One quote from MAC Commissioner Joe Steinbrecher explains his league’s decision and makes a resounding statement — to me, anyway — that we won’t have big-time college football until after Christmas.

“Clearly, we are charting a conservative path,” Steinbrecher said, “and it is one that has been recommended by our medical advisory group.”

From every administrator at every school, we’ve heard this for months: With regard to football, everything we do must be approved by health officials.

Now, as college teams are practicing for a season that for some would begin in three weeks, we’ve arrived at the deadline for the most difficult decisions.

Is there a health official in this country who would testify that it’s perfectly safe to play football? Of course not.

Regardless of the revenue implications, no Power Five commissioner or president is going to say, “Yeah, it’s risky, but we’ll roll the dice, play some games, hope for the best and collect that television money.”

It’s a safe presumption that Big 12 decision-makers networked on Saturday and will again on Sunday and Monday, and I’m guessing that by Wednesday there is the sickening announcement that the Big 12 season is postponed until January.

Big 12 media day was to have occurred last week, but it was canceled. Typically, for the Sunday that follows Big 12 media day, Guerin Emig and I collaborate for the Tulsa World on a big-picture look at the conference’s most prominent storylines.

Midweek, I proposed to Guerin that we could still piece together a Big 12 Sunday package of some sort, and that I would write a column on the Texas Longhorns.

In the Big 12 preseason poll, Oklahoma was favored to capture a sixth consecutive league title. Oklahoma State was picked second and Texas third. In the USA Today preseason coaches’ poll, OU is sixth, Texas is 14th and OSU 16th.

During the past 20 seasons, OU has 13 conference championships. Texas has two. Now, Longhorns coach Tom Herman has a veteran quarterback starter in Sam Ehlinger and a roster stacked with players who were members of highly regarded recruiting classes. In national recruiting rankings, Texas was No. 3 in 2018, No. 3 in 2019 and No. 8 this year.

I’m not writing this as a cheap shot against Texas, but to marvel at the mediocrity of a program that should consistently contend for a College Football Playoff berth. During the 2010-19 decade, Texas played 128 games. In 79 of those games, the Longhorns were not ranked in the Associated Press’ Top 25.

At a place like the University of Texas, being ranked is a pretty modest achievement. At a place like UT, actually, it really shouldn’t be considered an achievement at all. It should be a constant, and yet there were 79 games during which the Longhorns were unranked.

This is how a super heavyweight handles its business: During the 2010-19 decade, OU played 134 games. In only three of those games — the 2014 Texas Tech game, the 2014 bowl loss to Clemson and the 2016 conference opener at TCU — were the Sooners unranked.

In 41 of OU’s 42 games since Lincoln Riley became the head coach, the Sooners have been in the AP Top 10.

In 2010, Texas was ranked No. 5 during the preseason. In the final poll, the Longhorns were unranked, while the 10-win Tulsa Golden Hurricane was 24th.

In 2013, Texas was not in the final AP poll, but Duke and Vanderbilt were.

In the 2015 preseason poll, as TCU was No. 2 and Baylor No. 4, the state of Texas was beautifully represented near the top of the rankings. With an athletic department budget that might double TCU and Baylor’s combined, UT wasn’t ranked.

OU-Texas always is eventful. This year, it would have centered on a fascinating Ehlinger-Spencer Rattler duel. As Texas is desperate to chip away at OU’s Big 12 dynasty, it would have been a Cotton Bowl Saturday of high stakes and high drama. It would have been an important event for Texas, for OU and for the Big 12.

It might have been the type of game that would draw 12 million television viewers instead of the 7.3 million who watched last year’s OU victory over the Longhorns.

I get the same breaking-news notifications that you do, so I’m always cognizant of the daily developments in college athletics. However, when I turned out the lights on Friday night, I was still of the belief that somehow, some way, we would have some semblance of a football season, and I still planned to write extensively on the Texas Longhorns for the Sunday World.

The MAC decision obliterated that belief and that plan.

I expect that the MAC cancellation of fall football will have a trickle-down effect on conversations in Dallas (home of the Big 12), in Birmingham, Alabama (home of the SEC), and in Providence, Rhode Island (home of the American Athletic Conference).

Ultimately, the fate of fall college football will hinge on this: Everything must be approved by health officials.

If that really is the case, then there probably won’t be an OU-Texas showdown in October. Stadiums in Stillwater, Norman and midtown Tulsa may remain empty until January — and possibly until the 2021 fall season.

The MAC placed the well-being of players and coaches above all other considerations. No other conference will want to be viewed as being less responsible than the MAC, so fans of the Longhorns, Sooners, Cowboys, Golden Hurricane and every other major-college team should brace for bad news.

As someone whose life clock is set to College Football Time, I just can’t believe this is happening.

OU’s Pat Fields sacks Texas’ Sam Ehlinger during last year’s Red River Showdown. If officials decide against having a fall season, there would be no October game between the Sooners and Longhorns. IAN MAULE/Tulsa World file

Tulsa defensive end Jeremy Smith goes around a pair of Toledo blockers in a 2017 game in Toledo, Ohio. Toledo was supposed to open the season Sept. 5 at Tulsa, but on Saturday its conference postponed all fall sports to the spring. Eric Upchurch/for the Tulsa World, file