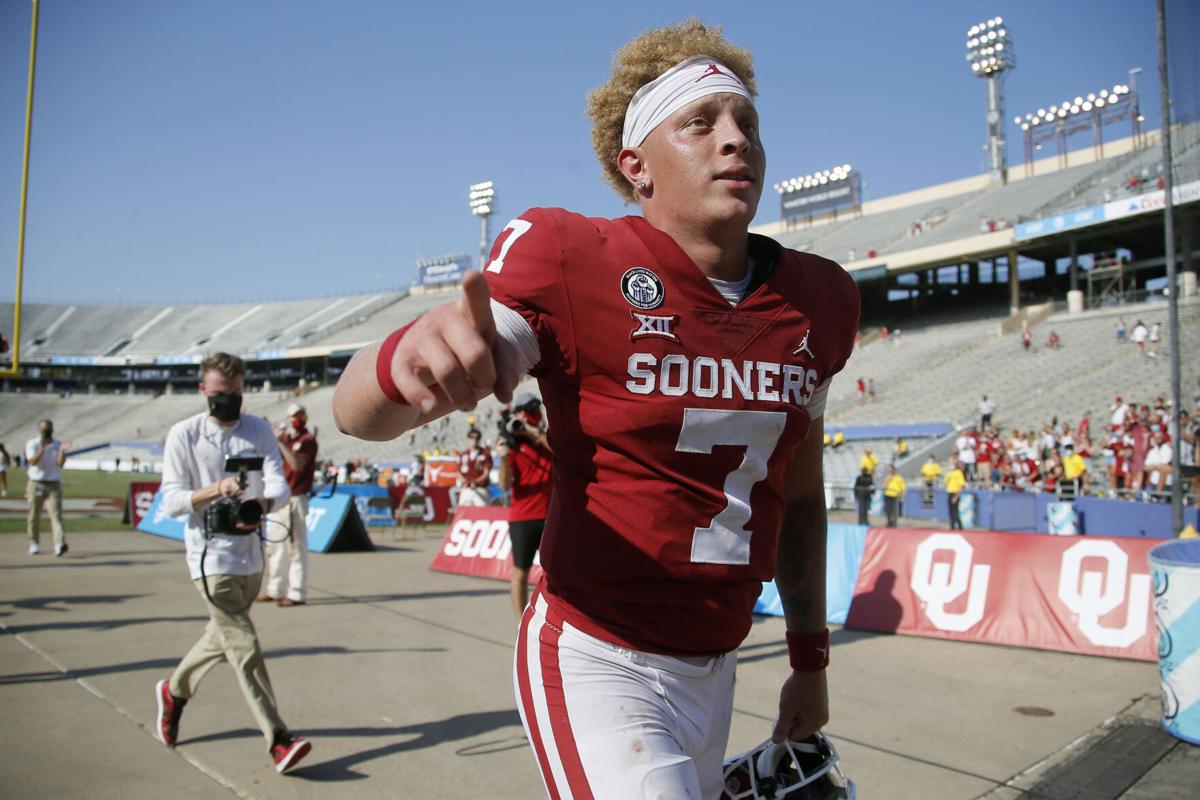 Capitalizing on NCAA legislation allowing college athletes to be paid for the use of their name, image and likeness, OU’s Spencer Rattler has aligned himself with two prominent agents and now has a Cameo video account. The price on a personalized Cameo video message from Rattler is $125.

During the recent ChampU BBQ event for OU football recruits, tomahawk ribeye steaks were provided by a Tulsa restaurant owner. Carved onto the bone of each steak: #OUDNA. 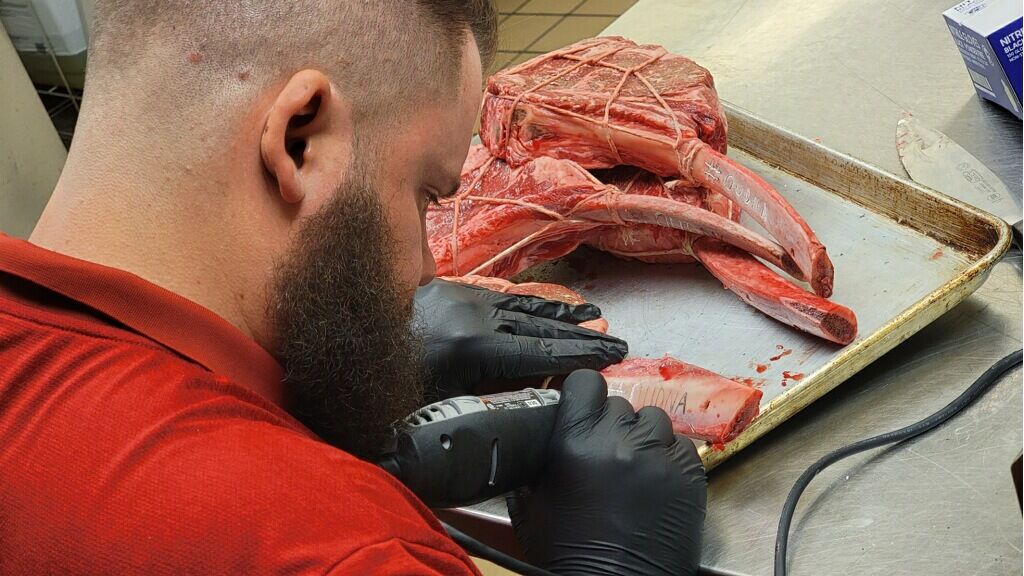 Tulsa restaurateur Travis Davidson doesn’t own the cars, but, as a friend of the OU program, he was responsible for persuading some of his restaurant patrons to provide their elite vehicles as ChampU BBQ photo props.

If you were on Twitter around that time, you probably saw high school recruits attired in OU uniforms and posing with some of Tulsa’s most prestigious cars. You also probably saw that former Sooner stars like Billy Sims, Kyler Murray, CeeDee Lamb, Sam Bradford and Adrian Peterson returned to Norman for the ChampU festival.

Brilliant food was served to official-visit recruits, along with their family members and guests. Davidson catered that food. There were 40 2½-pound Wagyu tomahawk ribeye steaks. A tomahawk ribeye is a beautiful, special-occasion cut of meat. It’s the type of steak you photograph before you put a knife on it.

During the Champ BBQ weekend, tomahawk ribeyes were smoked on Lincoln Riley’s driveway. Before the event, Davidson used a Dremel device to carve #OUDNA into the extended bone of each steak.

The 32-year-old Davidson very obviously is an OU booster. Soon, his involvement will extend to name-image-likeness relationships with Sooner football athletes. Now approved by the NCAA, Davidson has the ability to pay college athletes to represent his restaurants: Treys Bar & Grill in Bixby and Cardinal Club.

While Davidson might be the first Tulsa-area business figure to hold up his hand and say, “Yeah, I’m doing this,” he won’t be the only one.

“There is a lot of money in Tulsa,” Davidson said. “We’re two hours from Norman and an hour-and-a-half from Stillwater. Who’s to say the top University of Tulsa athletes can’t capitalize? You want me to believe Zaven Collins wouldn’t have garnered a lot of money last year?

Davidson says he “definitely” intends to have an NIL arrangement with at least two Sooner football athletes. He is focused on two specific Sooners, but doesn’t want to publicly mention names until the OU compliance office approves the contracts that would allow the athletes to be paid for endorsing or making appearances in Davidson’s establishments.

Bob Stoops and Marcus Dupree have been dinner guests at Cardinal Club. Former Sooners J.D. Runnels and Dom Franks were spotted while having lunch at Treys. So was OU offensive line coach Bill Bedenbaugh, and so was Baker Mayfield.

When Mayfield was at Treys during the summer of 2017 – a few months before he would win the Heisman Trophy – he wasn’t there to promote the restaurant or himself. He was just there to eat. It wasn’t an “appearance,” per se. Mayfield certainly was noticed, though.

Within a matter of days, at one or both of the Davidson restaurants, there could be advertised appearances by current members of the OU football team.

“Before any money can be exchanged,” Davidson explained, “we’re being told that everything has to be done at fair-market value, that there has to be a contract, and that the details of the contract must be presented to the university. After that the (university) compliance office has to approve of the contract.”

For an NIL participant like Davidson, there is the desire to become immediately involved and established as an attractive option for well-known athletes whose presence or association can provide a measurably beneficial impact.

At the same time, it’s wise to study the national big picture – to monitor the name-image-likeness market and see pricing become more defined.

“On all sides of this situation, everyone is learning as they go,” Davidson said. “Some of the young athletes will overestimate their (initial value) and say, ‘I want $5,000 for this or $10,000 for that.’ And then they’ll learn that their brand is worth a lot less money than they’re hoping for, so there will be some bruised egos in the beginning.

“The market will correct itself and the athletes will get a better understanding of what their value really is.”

With a message directed both at college athletes and recruits, OSU basketball coach Mike Boynton shared some wisdom on Twitter: “The NIL policies across the country COULD really be a game changer (for) you, but do yourselves a favor . . . READ THE FINE PRINT. (A) new lane has been created for you all to be misled and lied to about things that aren’t real.”

Among current college athletes, OU’s Spencer Rattler may command the most NIL money. His agents are Leigh Steinberg (who represented Troy Aikman and 11 additional Pro Football Hall of Fame members) and Chris Cabott (who represents Patrick Mahomes and was the primary negotiator of the 10-year Mahomes contract that ultimately could be worth $503 million).

From the Cameo website, personalized video messages may be purchased from a great variety of entertainment and sports personalities. The NCAA’s name-image-likeness legislation now allows college athletes to cash in on their notoriety.

For $50, you can order a video message from Iowa State running back Breece Hall or Texas QB Casey Thompson.

Opendorse is a Lincoln, Nebraska-based company that, according to its website, “provides technology to the athlete endorsement industry.” A year ago, as Rattler’s social-media reach is defined by 377,000 Instagram followers and 63,500 Twitter followers, Opendorse estimated that the OU quarterback could command more than $750,000 in name-image-likeness income.

Rattler tweeted this on Wednesday: “I will donate a part of any earnings I receive to help underserved people and underserved communities.”

The advent of NIL may have sneaked up on many people who either were oblivious or simply not fully informed about the impact.

It didn’t sneak up on Davidson or marketable athletes like Rattler. For months, college athletes have created personal logos and partnered with agencies that can help them maximize their income potential while still in college.

It is fairly stunning, however, to see the potential — that some of the more prominent college athletes could end up making more money in a year than the staff members who work as their position coaches.

'Fully committed' OU recruit Robert Spears-Jennings' family says it respects honesty and transparency; did they receive that from Roy Manning?

The Oklahoma assistant coach has also reportedly been recruiting for USC. Plus what contact did Alex Grinch have with the Broken Arrow star after the Lincoln Riley news broke?

Dan Lanning would be 'incredible fit and hire' for OU says Todd Graham, who introduced Georgia DC to college coaching

Said Todd Graham of Dan Lanning: “Dan was my right-hand man. He was as close of a confidant … I didn’t look at him as a GA. He’s one of the most gifted, talented, bright persons I’ve met."

Readers sound off some more over Sooners' next football coach, and the last one

Brent Venables was in Kansas on Tuesday ... or was he? Austin Stogner announces his transfer portal status and another recruit ditches the Sooners.

Readers have a lot to say about the OU football soap opera, so let's give them a forum

Guerin Emig: $33,000, a 'Chainsaw' and rooming with a Stoops: Seven short stories about Brent Venables

A quick dive into the old Venables file to help reacquaint us with Oklahoma's new head football coach.

Guerin Emig: Lincoln Riley is no weasel, he's just a big-time college football coach. And that makes him a shark.

OU fans have a right to be sore at their former football coach, but they also must realize he's as ambitious and arrogant as the rest of his profession

The name "Lincoln" exploded in the state between 2015 and 2020, coinciding with Riley’s time as coach. There have been 720 boys given that name during that span.

Brent Venables is former OU star's choice for next coach: 'He's a guy who understands the Sooners' tradition'

Brent Venables, the Clemson defensive coordinator and former OU assistant, has the backing of former players for the Sooners' next football coach.

Capitalizing on NCAA legislation allowing college athletes to be paid for the use of their name, image and likeness, OU’s Spencer Rattler has aligned himself with two prominent agents and now has a Cameo video account. The price on a personalized Cameo video message from Rattler is $125.

During the recent ChampU BBQ event for OU football recruits, tomahawk ribeye steaks were provided by a Tulsa restaurant owner. Carved onto the bone of each steak: #OUDNA. 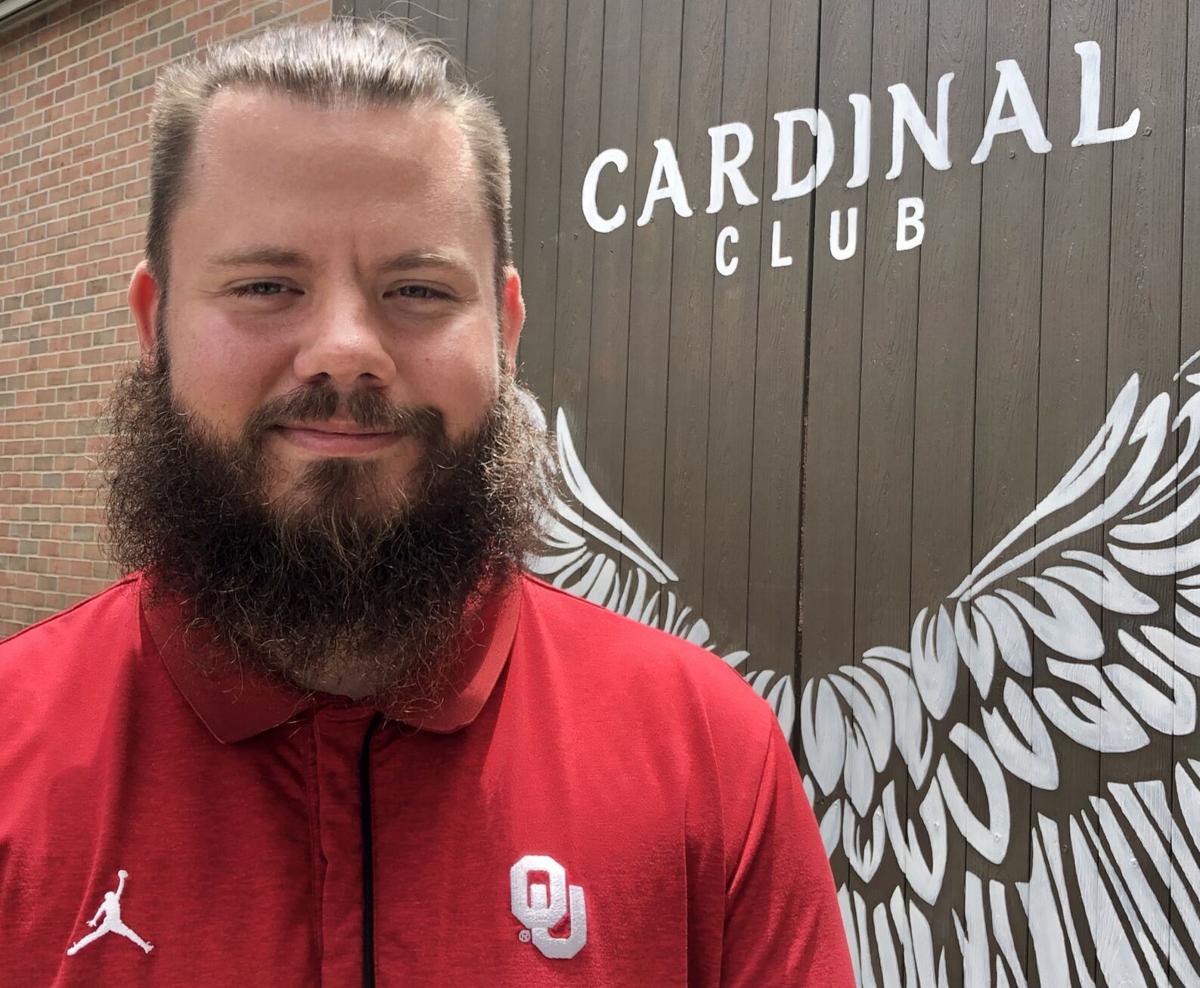