60,000 in Southern California to evacuate after blaze grows

Tulsa at No. 11 Oklahoma State: Cowboys survive Tulsa behind a solid defense and a freshman quarterback
Share this
{{featured_button_text}}
1 of 5 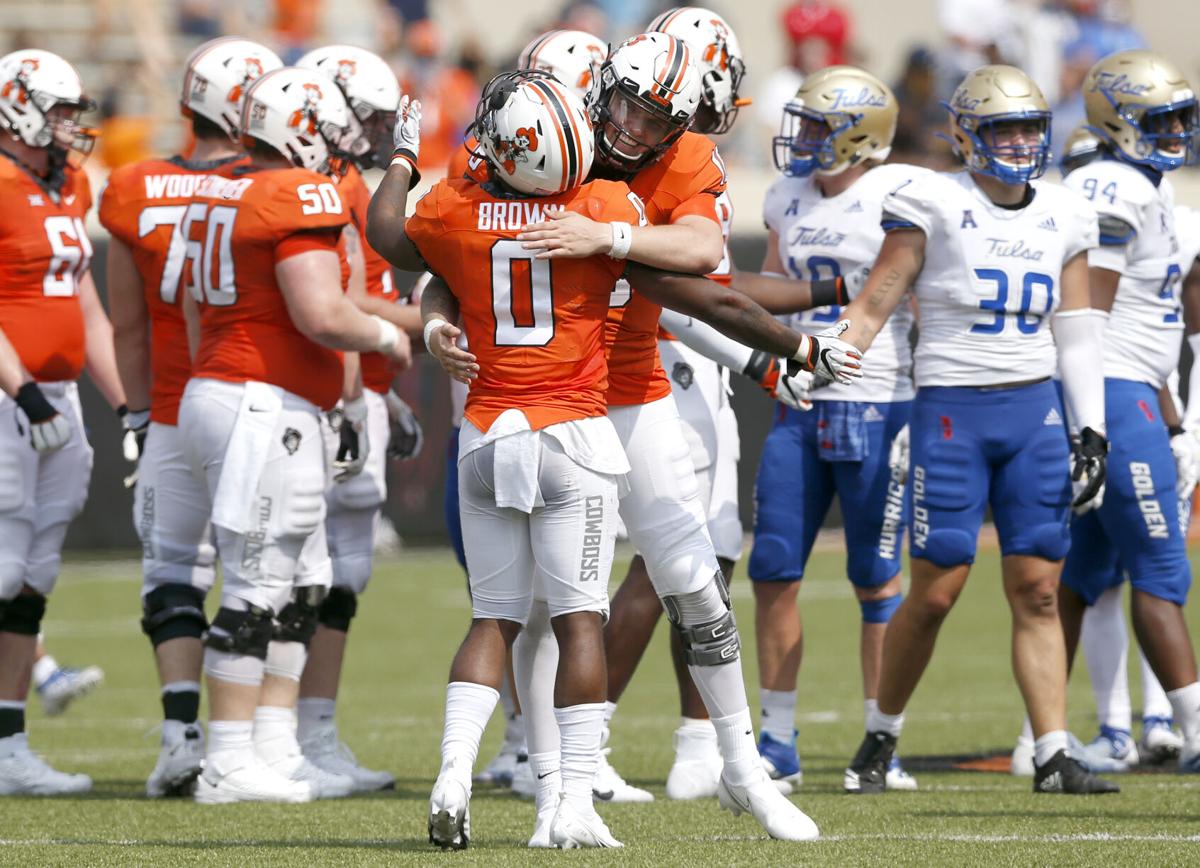 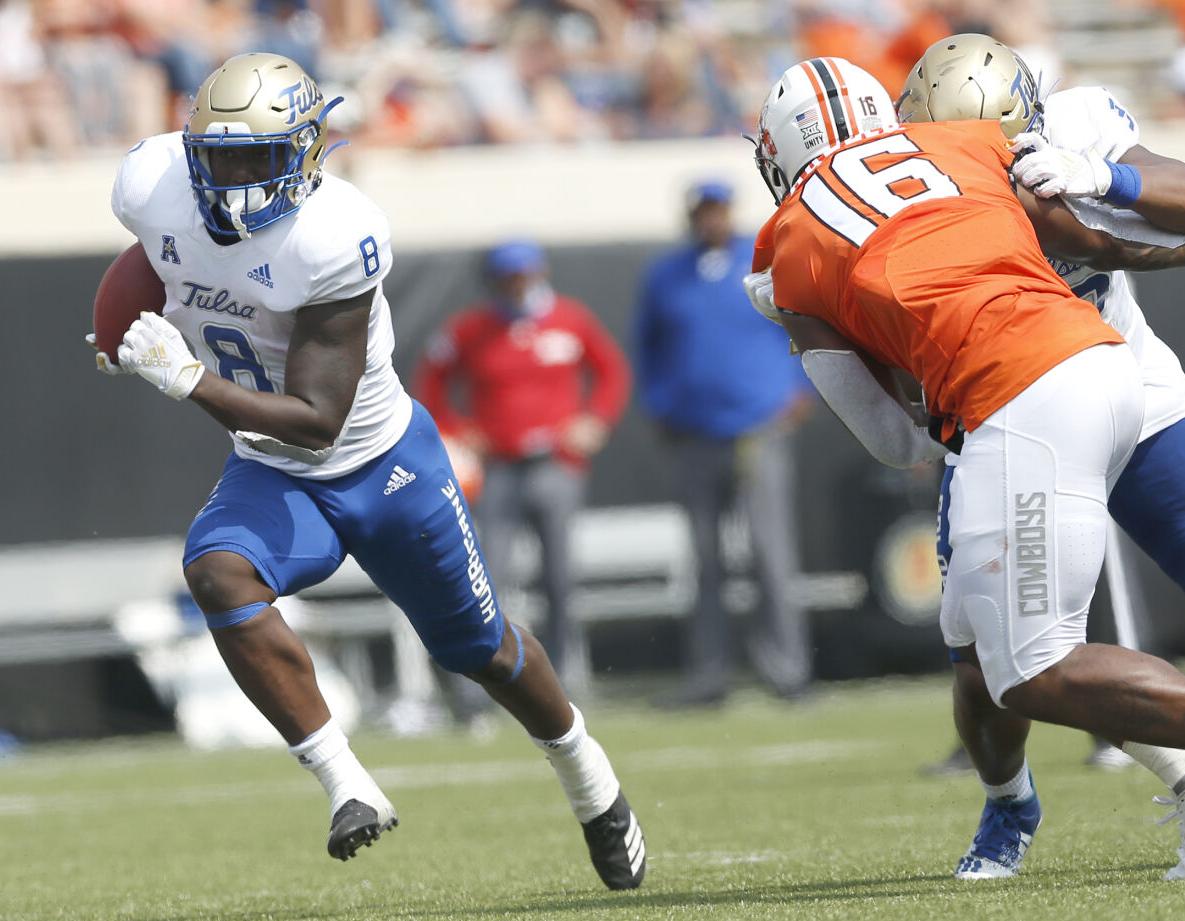 University of Tulsa running back Deneric Prince averages 5.9 yards per rush attempt. His production should be a significant factor during the Golden Hurricane's Saturday clash with eighth-ranked Cincinnati. JOHN CLANTON/Tulsa World 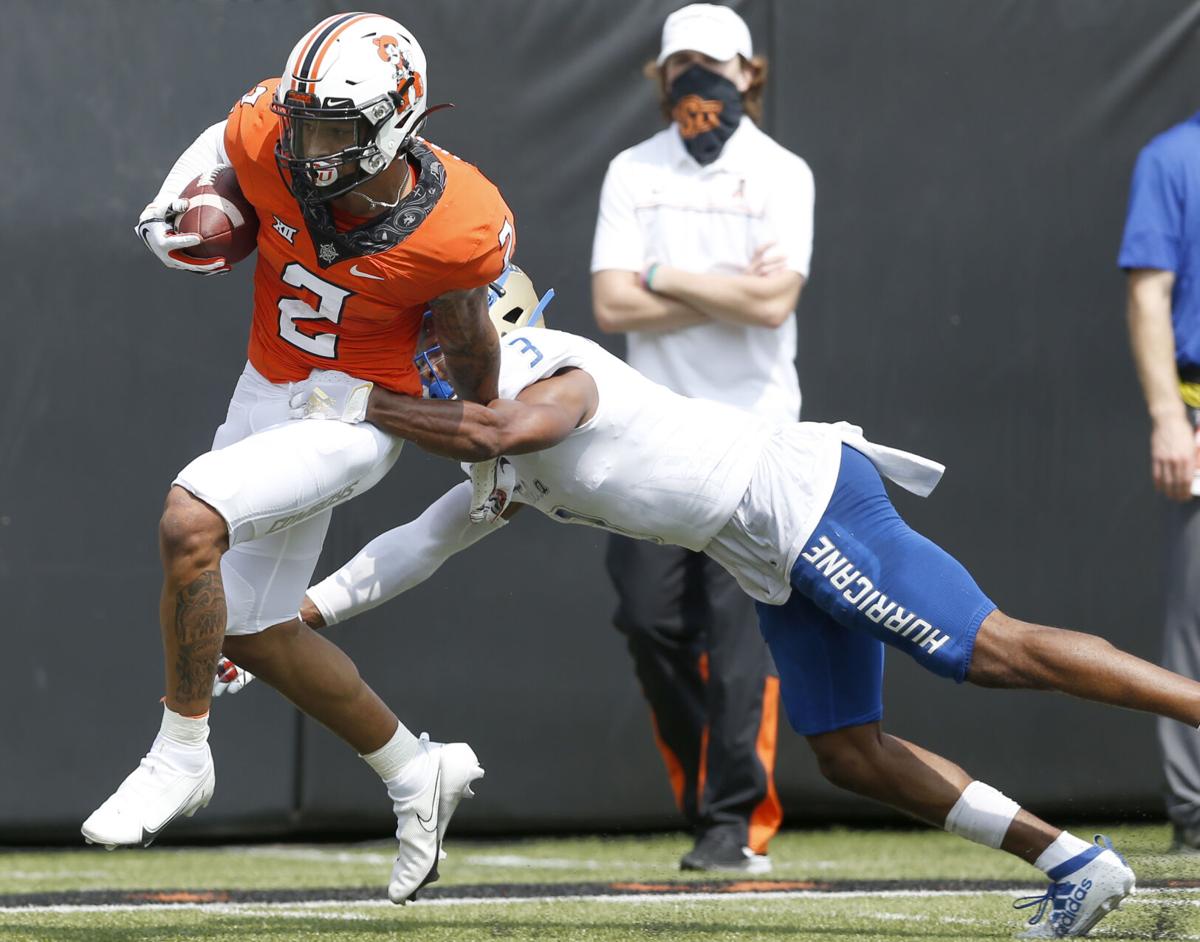 Oklahoma State receiver Tylan Wallace (left) takes the ball close to the end zone at the end of the third quarter before he is brought down by Tulsa’s Cristian Williams. 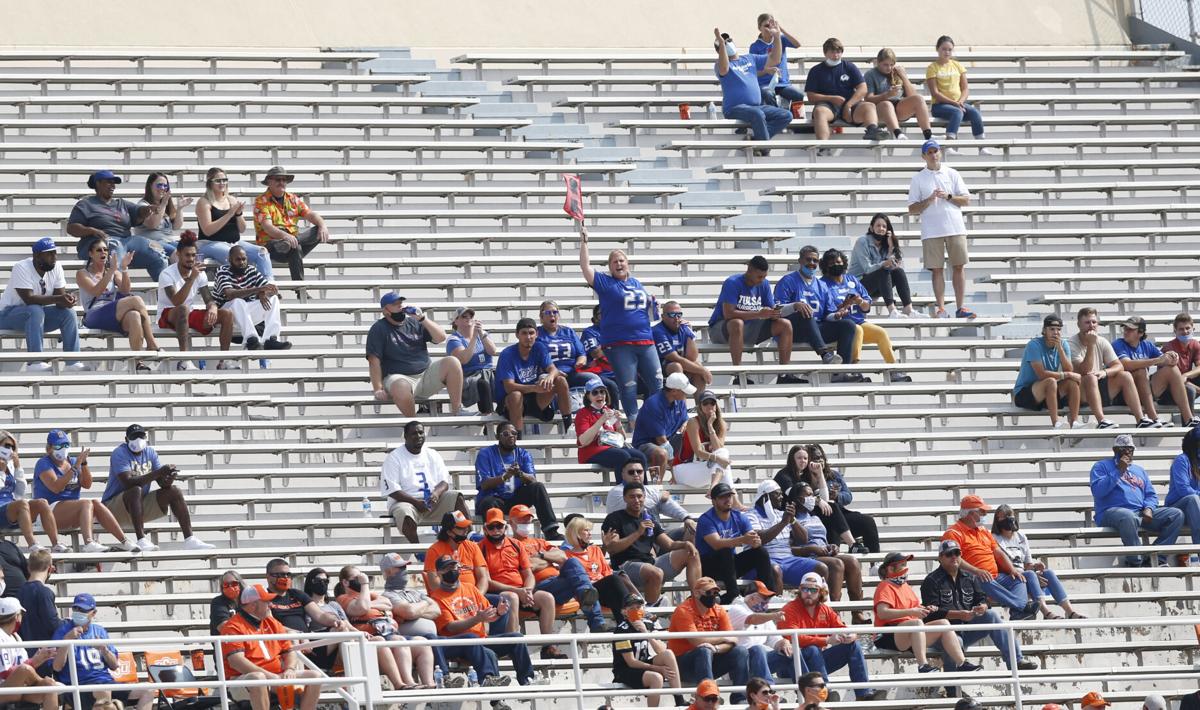 Tulsa fans cheer from the stands of mostly-empty Boone Pickens Stadium in Stillwater during the delayed season-opener in Stillwater. 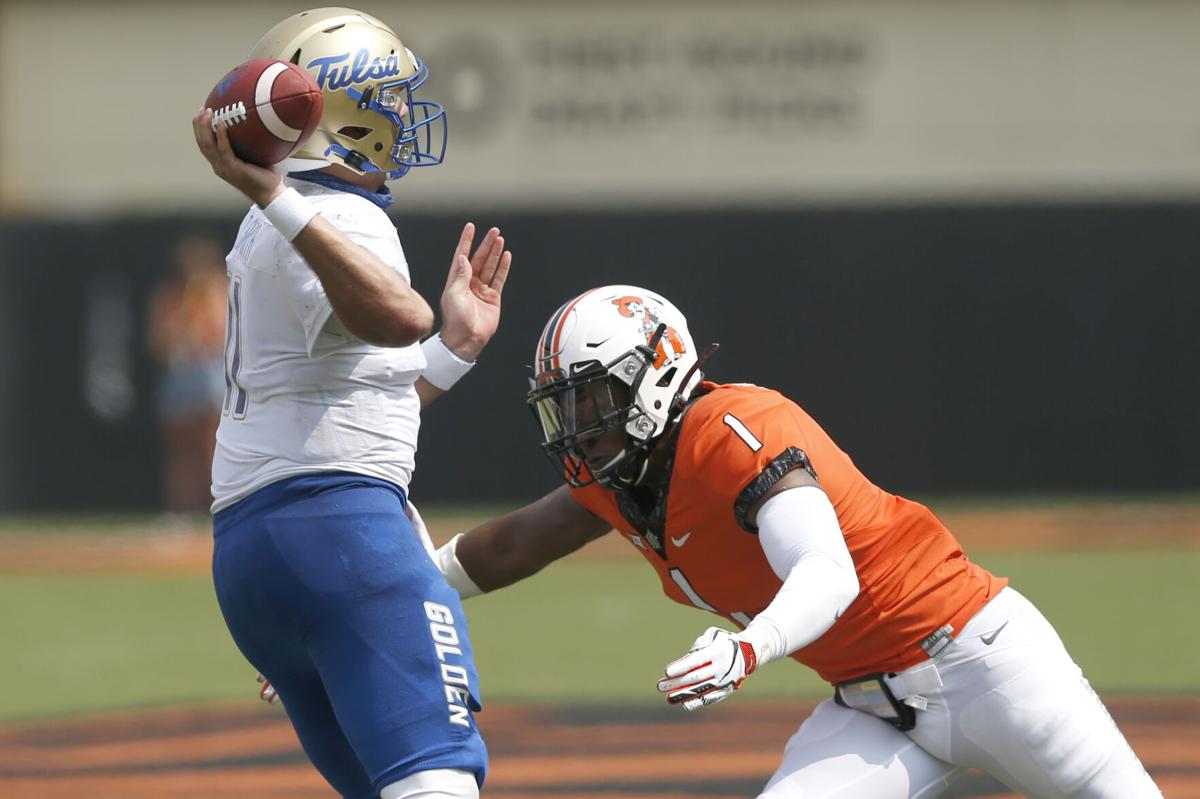 STILLWATER — The Oklahoma State defense entered this year with a load of confidence and didn’t disappoint.

Because of that, the Cowboys avoided a historic disappointment Saturday in their season opener.

Backup quarterback Ethan Bullock struggled to generate any offense and was eventually replaced by freshman Shane Illingworth in the third quarter. Illingworth helped generate enough offense to allow No. 11 OSU to survive with a 16-7 victory.

Illingworth was 4-of-5 for 74 passing yards, and the four-star prospect was the first true freshman to quarterback an OSU game in his first career game since Wes Lunt in 2012. The offense was stagnant until Illingworth took over. The Cowboys had five punts, a turnover on downs and an interception with Bullock leading the offense. He hit 8-of-13 passes for 41 yards and an interception.

“Bullock had a few things happen to him that weren’t really his fault,” Gundy said. “But it got to a point where we were just kind of stale, and I felt like we needed a change.”

Gundy made the change to Illingworth in the third quarter after Bullock’s interception. Illingworth completed two long plays to receiver Tylan Wallace on his first possession, a series that ended in a 3-yard touchdown run by Chuba Hubbard to give the Cowboys a 10-7 lead with 14:56 left.

Hubbard finished with 93 yards rushing and that TD. Wallace, who returned from a 2019 season-ending knee injury, caught four passes for 94 yards.

“You lose your quarterback after the first series of the game in your first game of the year and everybody is going, ‘Oh, crap, what the hell happened?’” first-year offensive coordinator Kasey Dunn said. “Those two guys stepped in and did a solid job. Hats off to Shane, he stepped in during a moment where we needed a couple of plays. He found the right couple of guys and got them the football. He got protection, settled up and did a nice job of standing in the pocket. ”

The Cowboys had 181 yards in the second half after being held to just 96 yards in the first two quarters. The Tulsa defensive line controlled the trenches for much of the game. The Golden Hurricane tallied six sacks and 15 tackles for loss. Linebacker Zaven Collins had three sacks before leaving in the third quarter. TU was also without its top running back, Shamari Brooks, who suffered a torn ACL in practice this week.

“Zaven, and our whole defense, they were flying around,” TU coach Philip Montgomery said. “Obviously, Zaven is a special player. We’ve got a lot of special players. Not having Yohance (Burnett) and definitely not having Zaven for the whole second half, it was a cramp deal, nothing major. He just had a bad string of them today. We’ve got two or three guys in that situation. Yohance is a special player for us, and he’s out for the year.”

The OSU offense didn’t have the usual explosive game Cowboys fans are used to, but the defense held down the fort by forcing TU to go 0-for-12 on third down. OSU won a game when scoring fewer than 20 points for the third time in the Gundy era.

The Cowboys took a 13-7 lead with 4:27 remaining, and the defense forced a fourth-and-24 on the following Tulsa drive. Linebacker Malcolm Rodriguez forced a turnover on downs with a sack at the Tulsa 2-yard line.

Watching a defense this productive take the field for OSU may be a surprise for some Cowboys fans, but safety Tre Sterling said that’s how the defense expects to play.

“We went out there every time no matter what yard line or down situation, expecting to go out there to get a stop regardless,” Sterling said. “That’s what great defenses do and I believe we’re a great defense.”

Guerin-teed it was quite a week: Cowboys' joyride continued against Iowa State

OSU is winning games and having fun, especially on the defensive side of the ball

The Cowboys have a lot of young talent but many of them lack experience playing at the collegiate level. That’s why bringing an experienced Ferron Flavors was so important for the Cowboys.

Iowa State at OSU: Everything you need to know in four downs

OSU football: Offensive lineman Jake Springfield went from an OSU walk-on to starting for the No. 6 team in the nation

Jake Springfield wasn’t highly recruited coming out of Flower Mound High School in Texas. Now, he is starting at left tackle for the No. 6 team in the country while helping pave the way for one of the most talented running backs in the country.

University of Tulsa running back Deneric Prince averages 5.9 yards per rush attempt. His production should be a significant factor during the Golden Hurricane's Saturday clash with eighth-ranked Cincinnati. JOHN CLANTON/Tulsa World

Oklahoma State receiver Tylan Wallace (left) takes the ball close to the end zone at the end of the third quarter before he is brought down by Tulsa’s Cristian Williams.

Tulsa fans cheer from the stands of mostly-empty Boone Pickens Stadium in Stillwater during the delayed season-opener in Stillwater.