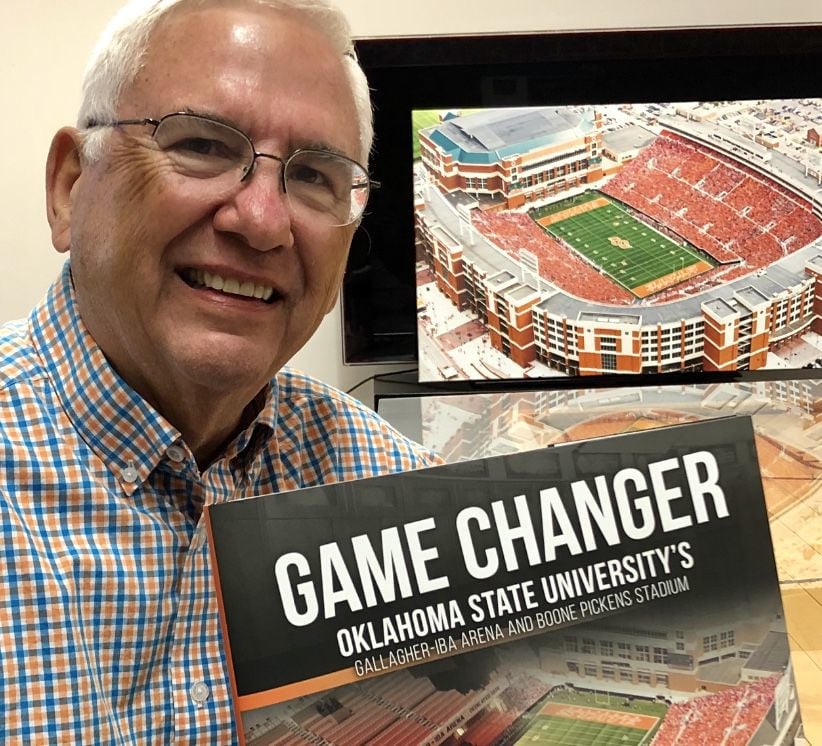 In 1995-2009, during the process that resulted in the extensive renovation of OSU’s Gallagher-Iba Arena and Boone Pickens Stadium, Tulsa architect Gary Sparks estimates he drove to Stillwater 2,000 times. The book has pictures that have never been seen by most OSU fans. BILL HAISTEN/Tulsa World 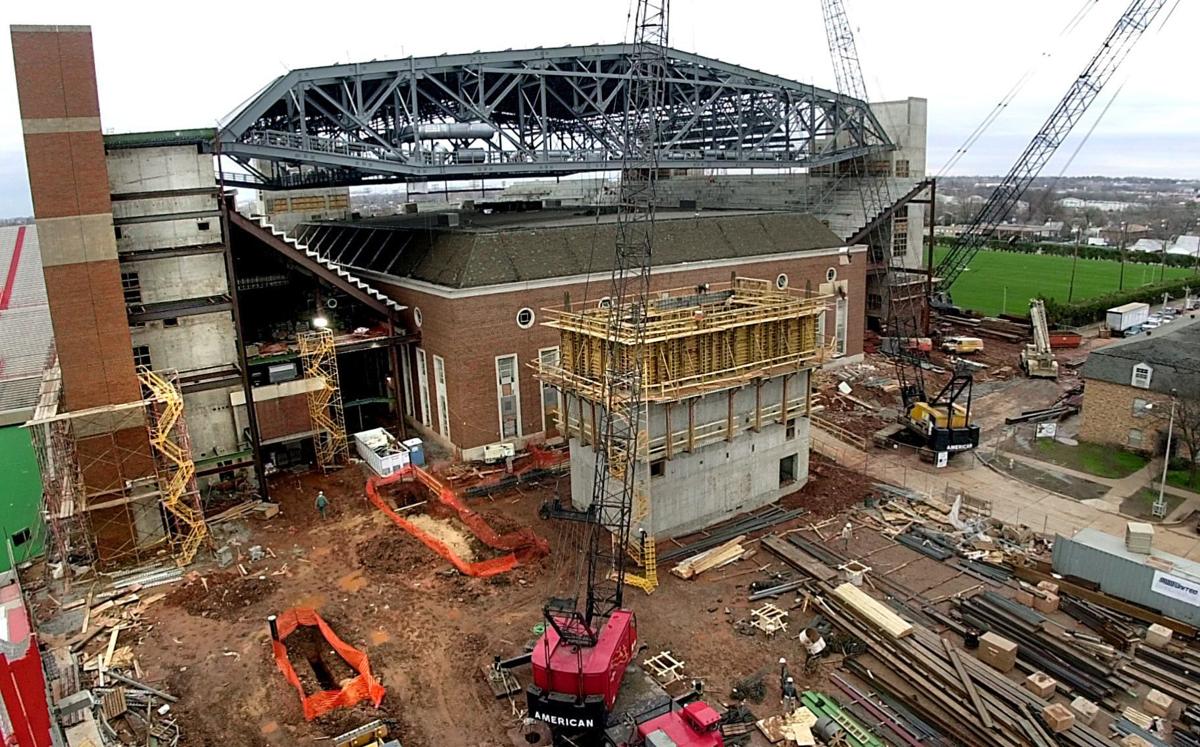 View of the construction on OSU’s Gallagher-Iba Arena prior to the last game in the old building in March 2000. Tulsa World file 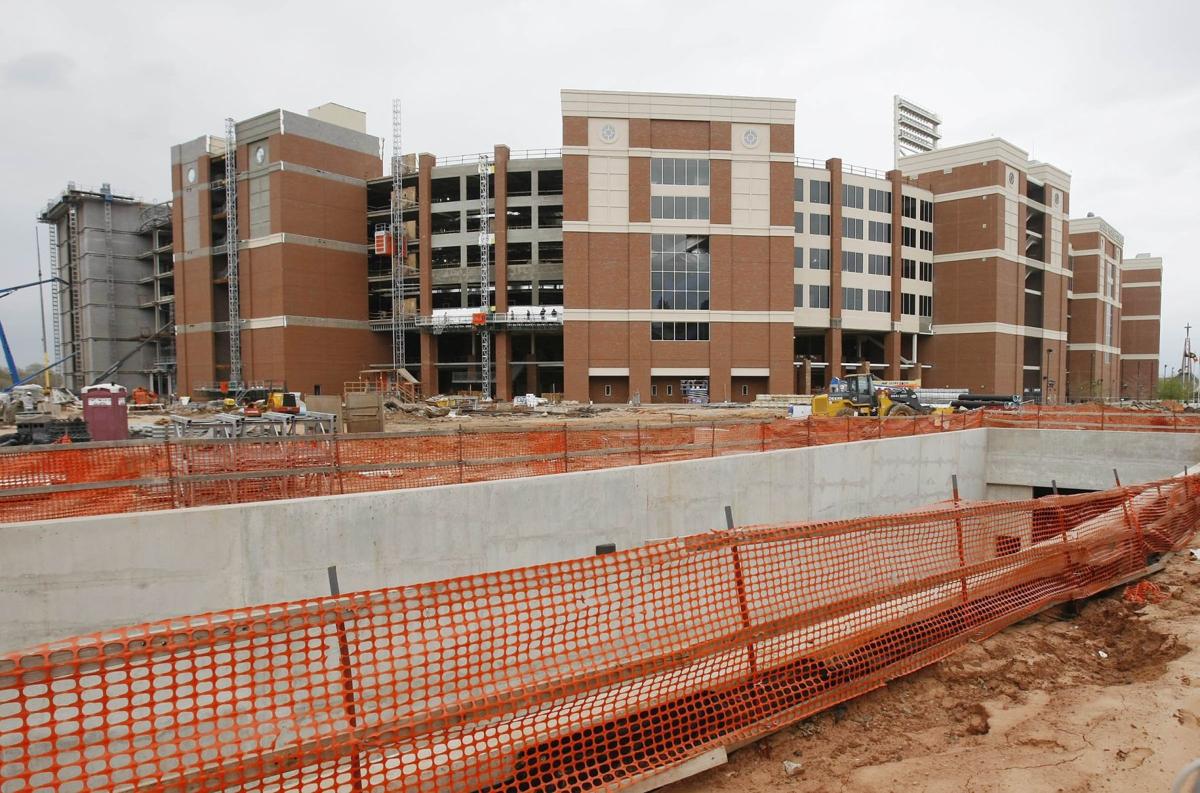 In 1995-2009, during the process that resulted in the extensive renovation of OSU’s Gallagher-Iba Arena and Boone Pickens Stadium, Tulsa architect Gary Sparks estimates he drove to Stillwater 2,000 times. The book has pictures that have never been seen by most OSU fans. BILL HAISTEN/Tulsa World

View of the construction on OSU’s Gallagher-Iba Arena prior to the last game in the old building in March 2000. Tulsa World file

As the Tulsa architect who had “The Big Idea” to build a new Gallagher-Iba Arena over the top of the old Gallagher-Iba Arena, and who followed with most of the design of the sensationally renovated Boone Pickens Stadium, Gary Sparks was at the center of a movement that forever changed OSU athletics.

Having had time to examine the scope of such massive projects, Sparks was motivated to write “Game Changer,” a 162-page coffee-table book that revisits every aspect of the Oklahoma State process.

“Not very many people know the real story,” Sparks says.

“It makes sense,” Brooks wrote, “that the heart and soul of the campus are Gallagher-Iba Arena and Boone Pickens Stadium.”

If not for the tenacity of Cowboy athletic director Mike Holder and the generosity of T. Boone Pickens, the scope of the $283 million stadium project would not have been nearly as grand.

Appalled by the condition of OSU’s facilities, Phillips was of the belief that OSU had no chance to remain relevant if there weren’t a dramatic upgrade of the arena, the stadium and other venues.

A 77-year-old native of North Carolina, Sparks attended high school in Alabama. In 1960, he moved to Sand Springs and worked with a crew that was involved in the development of Keystone Dam.

Sparks graduated from OSU in 1966 and established a Tulsa architecture firm in 1978. He and his wife, Jerri, have been married for more than 50 years.

In 1995, within days of Phillips having become the OSU athletic director, he was introduced to Sparks. Phillips, Sparks writes, “nearly had heart failure” when he saw that Barry Sanders’ Heisman Trophy was displayed in a corner of Gallagher-Iba that had very little fan traffic.

Within that corner were a drinking fountain, a fire extinguisher, two restrooms and the 1988 Heisman Trophy. Check the photo on page 34 of the book. You’ll understand why Phillips was mortified.

Within the old Gallagher-Iba was an inadequate wrestling room. It was so undersized, there wasn’t enough floor space for a regulation-sized mat.

Sparks remembers hearing a 1995 radio report indicating OSU and the city of Stillwater were considering a partnership on the construction of an off-campus arena.

“I nearly lost control of my car,” Sparks recalls. “What a horrible idea.”

That night in Tulsa, Sparks sketched what he had envisioned that very day. His “Big Idea”: “What if we expanded around the existing building and then we raise the roof?”

Phillips’ reaction to the concept: “I love it. Are you sure you can do it?”

While Sparks expressed confidence it could be executed, he knew there were challenges: “How are you going to build this thing (while not disrupting) the basketball teams and the wrestling team? You’re going to double the capacity while those teams aren’t missing (any games or matches)?

“You’re going to save the basketball court and preserve the integrity of the building? It was difficult for people to wrap their minds around it, but I knew we could do it.”

Phillips had a message for Sparks and for anyone else who would listen: “If we have good facilities, we can hire good coaches and recruit good players. We can win championships.

“Coaches will be more likely to stay. Ticket sales will improve. Fundraising will be better. But it has to start with facilities.”

“The problem was, at that time, there was no enthusiasm for football.” Sparks said. “In 1995, Eddie Sutton had just taken OSU to the Final Four in basketball, but we were really struggling in football.

“That’s why Terry Don chose to start with Gallagher-Iba. Once we could show people what could be done with the arena, it would be easier to sell them on the idea of a stadium project.”

In honor of their longtime friendship with OSU basketball coaching legend Henry Iba, Walt and Peggy Helmerich of Tulsa donated the lead gift of $2 million. The official groundbreaking ceremony occurred on Jan. 12, 1999.

The renovation was done, miraculously, without displacing the OSU basketball teams and wrestling team. Arena capacity increased from 6,381 to 13,611.

Among the book’s nuggets is this: While there’s not absolute certainty on the original construction cost (either $1.5 million or $400,000, according to the book), the OSU arena in 1938 was known as the 4-H Club and Student Activity Building. It was given a cool nickname: “Madison Square Garden of the Plains.”

Sparks’ book also makes reference to a certifiably crazy stadium idea from the early ’80s. In a desperate attempt to improve Lewis Field in an inexpensive manner, the university commissioned a Kansas company to design what would have been an air-filled structure, enveloping the stadium and providing shade.

If you can picture one of those bouncy-house things you see at a kid’s birthday party, then imagine something huge and comparable being tethered at the four corners of Lewis Field. On page 69 of the book are the original drawings.

“Game Changer” includes more than 150 photos, several of which provide reminders of how run-down and outdated Lewis Field and Gallagher-Iba Arena had become. There are several images of the stadium’s finished west-end interior. Most fans have never before seen these images.

“With the book, I wanted to recognize the people who were behind the scenes. There were a lot of them,” Sparks said. “I want their kids and grandkids to read this book and understand the magnitude of what we did at OSU.”

Get your All-World Awards tickets for the June 22 event celebrating high school athletics at allworldawards.com.

Photo gallery: Here are the 2018-19 fall and winter sports finalists for the third annual All-World Awards in June

Subject: The process that resulted in the extensive renovation of Oklahoma State’s Gallagher-Iba Arena and Boone Pickens Stadium.

Author: Tulsa architect Gary Sparks, who in 1995 teamed with then-OSU athletic director Terry Don Phillips to start the movement toward arena and stadium improvements. Sparks was a principal in the design of the arena and stadium.

Description/availablility: Coffee-table book. Hardcover (162 pages, $29.95). Available on Amazon, at the Full Circle bookstore in Oklahoma City, at the Hall of Fame Book Trader in bookstore Stillwater, and by calling by the Oklahoma Hall of Fame at 405-235-4458.