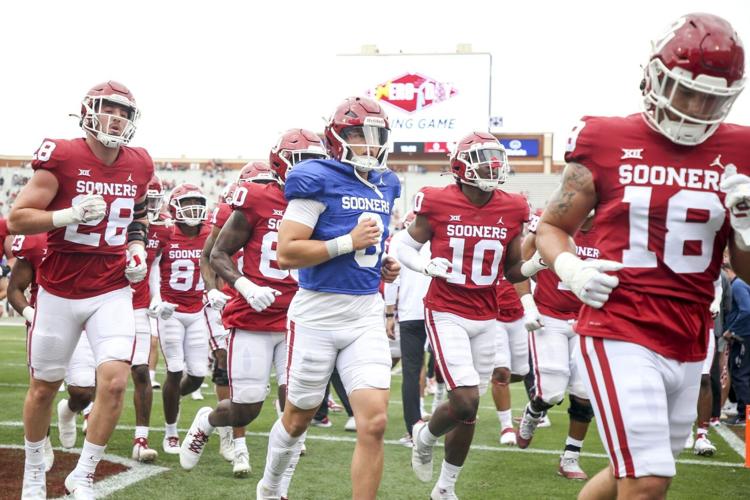 Oklahoma quarterback Dillon Gabriel (center) has established himself as an important leader for Brent Venables. 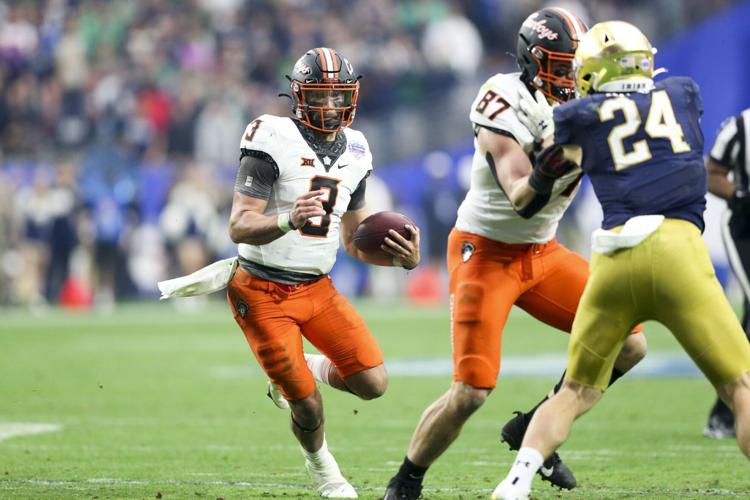 Oklahoma State quarterback Spencer Sanders and Oklahoma quarterback Dillon Gabriel are among 52 FBS players on the watch list for the 2022 Walter Camp Player of the Year Award, announced Friday by the Walter Camp Football Foundation.

Both quarterbacks are on the watch list for the Maxwell and Davey O'Brien awards in addition to Walter Camp, which is the nation's fourth-oldest individual college football accolade.

The returning All-Big 12 quarterback after leading the conference in total offense and total offense per game in 2021, Sanders has 24 wins as OSU's starter and needs eight more to tie Mason Rudolph for the most wins as a starting quarterback in school history.

His 6,911 career passing yards total ranks among the top 10 of all returning Power Five players and stands as the second-most in school history for any player entering his senior season.

Gabriel started 25 games in three seasons at UCF, throwing for 8,037 yards and 70 touchdowns while completing 60.7% of his passes. Despite missing the last 10 games of 2021 with an injury, his 70 touchdown passes rank third nationally during the past three years.

Guerin Emig: Progress between OSU defensive players and new coordinator Derek Mason as obvious as bond between Cowboys and the old one

“Some days you don’t want to get out of bed, and some days you’re very optimistic about the future and what you can do,” Ford said at OSU’s media day Saturday.

According to court documents, a warrant is out for Ferrari's arrest.

After being forced to grow up quickly, Oklahoma State’s up-and-coming receivers are primed to build on last year’s success.

Watch Now: After challenging spring, OSU offensive line is back to full strength

One of the biggest spring storylines was a severe lack of offensive line depth that led to the Cowboys not playing a traditional spring game.

It will likely take games to know what Mike Gundy has at running back and behind Spencer Sanders at quarterback, but preseason camp can help.

Bill Haisten: For Spencer Sanders, milestones and another OSU quest for at least 10 wins

In 2010-21, OSU had more seasons of at least 10 wins than Texas, Texas A&M, Texas Tech, Kansas State and Nebraska combined.

OSU wrestler AJ Ferrari accused of sexual assault, no longer on the team

A popular social-media figure who signed a name-image-likeness deal with the WWE, his undefeated sophomore season ended abruptly when he was seriously injured in a car crash in January.

The pursuit of another successful year begins Wednesday for Oklahoma State, which opens preseason practice following a memorable 2021 campaign.

Both quarterbacks also were on the Maxwell Ward watch list released Monday.

Oklahoma quarterback Dillon Gabriel (center) has established himself as an important leader for Brent Venables.