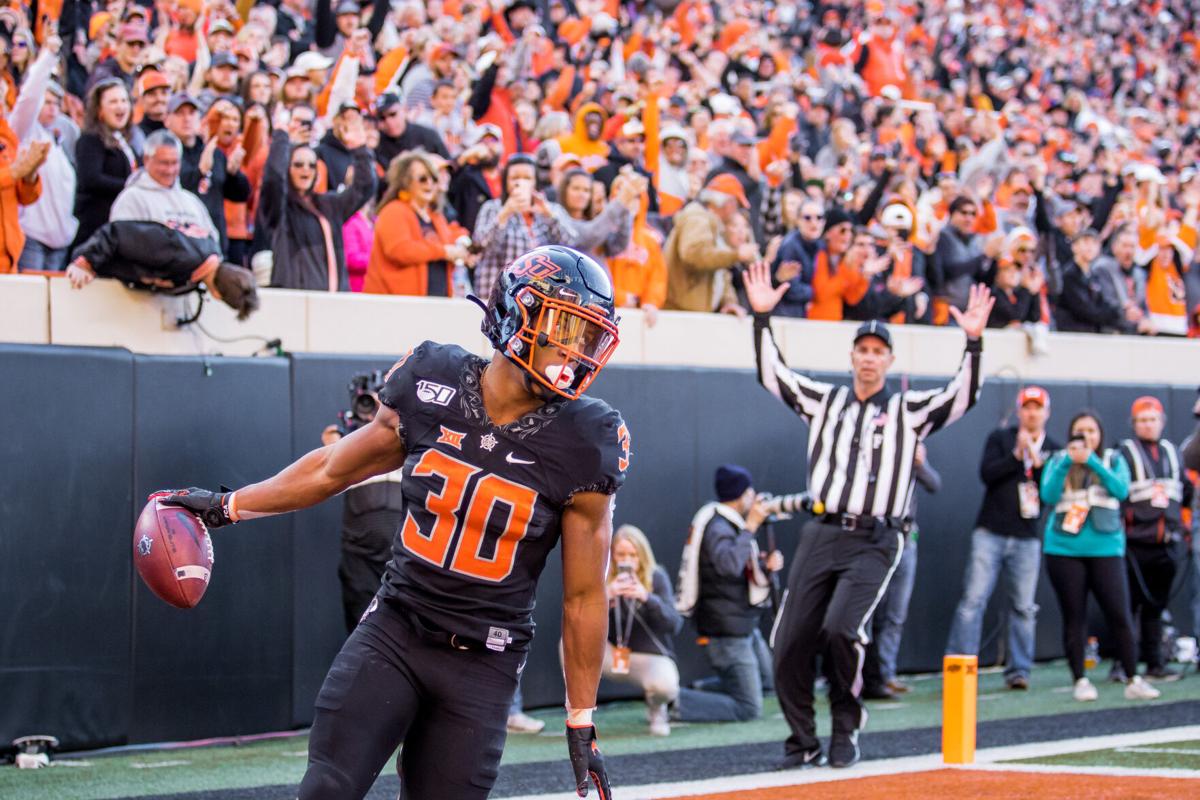 Chuba Hubbard celebrates a touchdown in a game against TCU on Nov. 2, 2019 at Boone Pickens Stadium in Stillwater. Hubbard was drafted by the Carolina Panthers on Saturday. 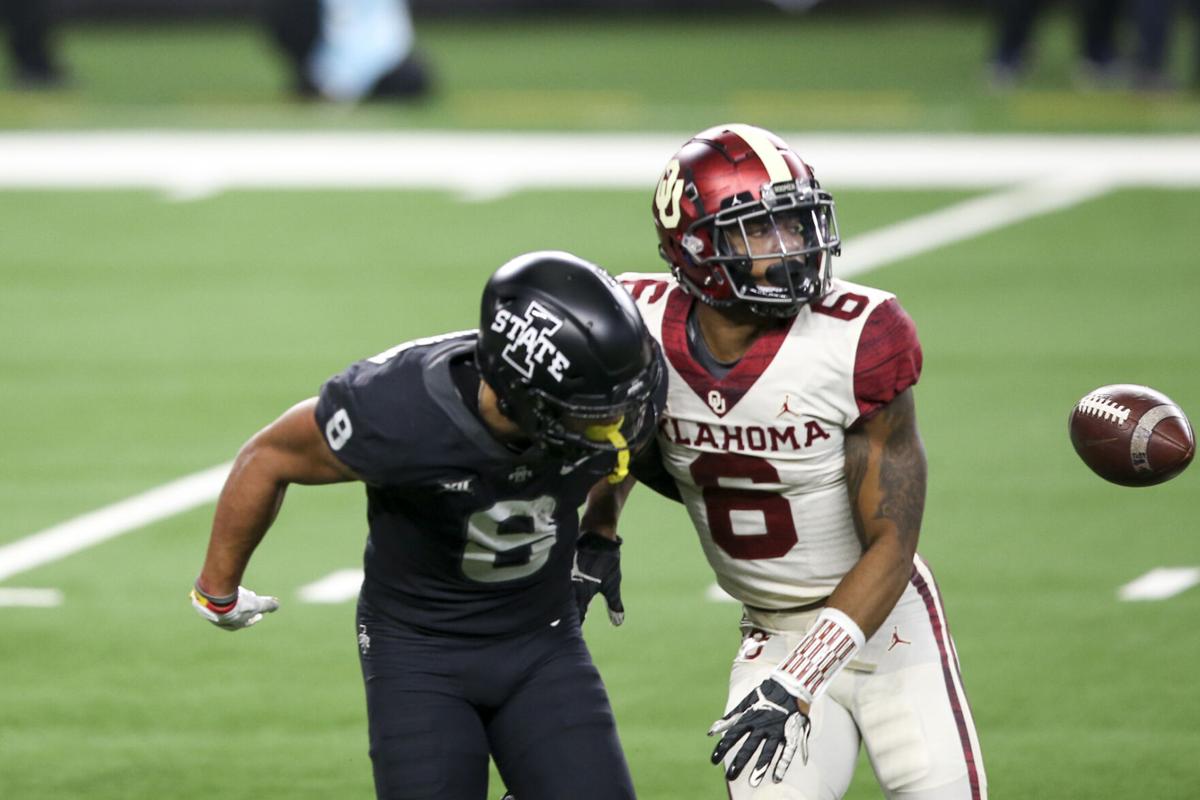 Oklahoma cornerback Tre Brown (right) knocks a pass away from Iowa State wide receiver Xavier Hutchinson during the Big 12 Championship game in Arlington, Texas on Dec. 19. Brown was drafted by the Seattle Seahawks on Saturday.

Carolina Panthers coach Matt Rhule received a text message from his wife Saturday, asking him to take former Oklahoma State running back Chuba Hubbard with the 126th overall pick in the fourth round of the 2021 NFL draft.

Ten minutes later, Rhule was on the phone informing Hubbard that he was being drafted. Hubbard was taken six picks behind Oklahoma running back Rhamondre Stevenson, who was chosen with the 120th pick by the New England Patriots.

Three of the four OSU players taken in this year’s draft were selected on Saturday. Three of the five OU players drafted were also picked Saturday. The highest-drafted area athlete taken this year was Tulsa linebacker Zaven Collins at No. 16 overall to the Arizona Cardinals in the first round on Thursday.

Rhule, who coached in the Big 12 for three years at Baylor, saw Hubbard’s talent up close.

Hubbard rushed for 171 yards and two touchdowns against Baylor in Rhule’s last year in Waco in 2019. Hubbard led the country with 2,094 rushing yards that season.

“You know I couldn’t sit there and watch you run wild on me all those years at Baylor and not take you when I had a chance,” Rhule told Hubbard over the phone in a video the Panthers released on Twitter.

Hubbard was viewed as one of the best backs in the country following his 2019 campaign, but injuries prevented him from executing a similar encore last year. He had 133 carries in seven games last season and finished with 625 rushing yards and five touchdowns.

The 2020 season didn’t help Hubbard’s draft stock, but Rhule said he knows he’s getting a quality running back and a former track star who clocked a 4.45 in the 40-yard run at the OSU Pro Day. Hubbard will join versatile running back Christian McCaffrey in the Panthers backfield and is going to a team that he has always enjoyed watching.

“I grew up a big Cam Newton fan, so I was always watching the Panthers,” Hubbard said in an introductory Zoom call with Panthers media. “When they went to the Super Bowl against the Broncos I was really hoping the Panthers were going to win, I’m not going to lie. I love the Panthers. I’m forever fortunate, forever blessed to be chosen by them. I’ve got a big chip on my shoulder. I promise they’re going to get the best out of me.”

Another former Cowboy who may have a chip on his shoulder is receiver Tylan Wallace, who saw 18 receivers go ahead of him before being drafted by the Baltimore Ravens with the 131st overall pick in the fourth round, five spots behind Hubbard. Wallace will be reunited with former OSU running back Justice Hill, who was drafted by the Ravens in 2019.

Wallace was a 2018 Biletnikoff Award finalist but missed the last five games of the 2019 season with a knee injury. Wallace returned for the 2020 season to record 59 receptions for 922 yards and six touchdowns in 10 games.

His 205 career receptions and 3,434 receiving yards are both ranked fifth in school history. His 26 career receiving touchdowns are No. 6 on the OSU all-time list. Wallace said during his introductory Zoom call with media that he is excited at the prospect of playing with Ravens quarterback Lamar Jackson.

“It’s still surreal to me that I’m going to be catching passes from him,” Wallace said. “He’s an inspiration to all the guys, especially young guys like me. So being able to go up there and being able to hang out with him and build that chemistry with him, I can’t wait for it.”

Oklahoma cornerback Tre Brown joined teammate Stevenson as fourth-round selections. Brown was drafted by the Seattle Seahawks at No. 137.

Stevenson will be joining his OU teammate Ronnie Perkins, who was New England’s third-round pick on Friday. An NCAA suspension limited Stevenson to just six games last season and he racked up 665 rushing yards with seven touchdowns in his limited action.

Brown is the first OU cornerback drafted since Zack Sanchez was taken in the 2016 draft. He will join former Bedlam rival Tre Flowers in the Seahawks cornerback room. Seattle drafted Flowers out of OSU in 2018.

Former OSU cornerback Rodarius Williams was taken by the New York Giants in the sixth round. The Giants are getting a lockdown defender who didn’t allow a single touchdown in 255 coverage snaps last season, according to PFF Stats. OU cornerback Tre Norwood was the last area athlete to be drafted. He was taken in the seventh round by the Pittsburgh Steelers.

The OSU football Twitter page confirmed the reports by congratulating all four players.

Calvin Bundage agreed to terms with the Pittsburgh Steelers. Bundage is listed as a linebacker but mostly played as an edge rusher in his final season with OSU.

Linebacker Amen Ogbongbemiga helped anchor an impressive defensive season for OSU and is headed to Los Angeles after agreeing to sign with the Chargers.

Dillon Stoner agreed to terms with the Las Vegas Raiders after a strong OSU career that ended with 191 career receptions, which is sixth in school history.

Defensive tackle Cameron Murray, who was a leader on the OSU defensive line, is headed to Arizona after agreeing to terms with the Cardinals.

After only one season with the Kansas Jayhawks, and after spending exactly a month in the transfer portal, Bryce Thompson announced his destination on Thursday.

Bill Haisten: At OSU, Bryce Thompson writes the next chapter of his basketball life

The updated scouting report on Bryce Thompson: After eight months as a Jayhawk, he seems to do everything with more strength and authority.

Bill Haisten: Maybe this stress-free Bedlam win can result in momentum for OSU

Maybe this Bedlam ballgame – the 333rd collision of the baseball Cowboys and Sooners – was the well-timed start of something good for Oklahoma State.

Home runs were flying out of the park like crazy, but it was a pair of defensive plays by OSU that helped seal the victory at Cowgirl Stadium — Oklahoma State’s first win over a top-ranked team at home.

OSU guard Avery Anderson III, who declared for the 2021 NBA Draft without an agent in April, is returning to Stillwater he announced on Sunday.

The Sooners used nine pitchers who walked a combined 11 batters and hit three. Two of OSU’s runs were scored via bases-loaded walks.

OSU softball was only the second team to beat the Oklahoma Sooners this season, but head coach Kenny Gajewski said his team wasn't satisfied with just beating OU once.

Sooners strike back, even Bedlam series with 6-4 win over Cowgirls

OSU brought the winning run to the plate in its final at-bat, but OU closed the door in a dramatic Bedlam duel.

Chuba Hubbard celebrates a touchdown in a game against TCU on Nov. 2, 2019 at Boone Pickens Stadium in Stillwater. Hubbard was drafted by the Carolina Panthers on Saturday.

Oklahoma cornerback Tre Brown (right) knocks a pass away from Iowa State wide receiver Xavier Hutchinson during the Big 12 Championship game in Arlington, Texas on Dec. 19. Brown was drafted by the Seattle Seahawks on Saturday.