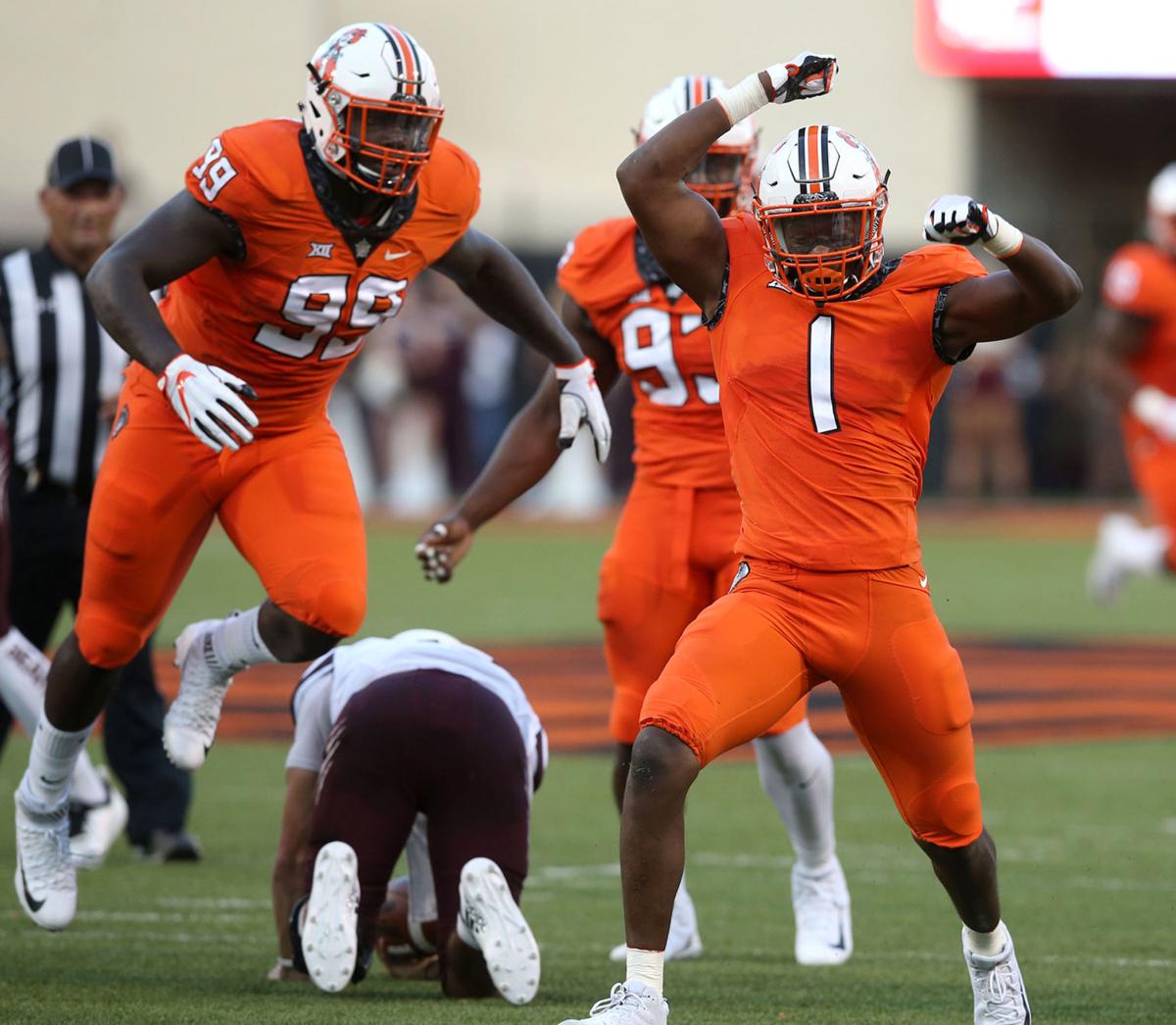 Oklahoma State’s Calvin Bundage (right), celebrating a sack in a 2018 game against Missouri State, missed all of last season with a back injury. 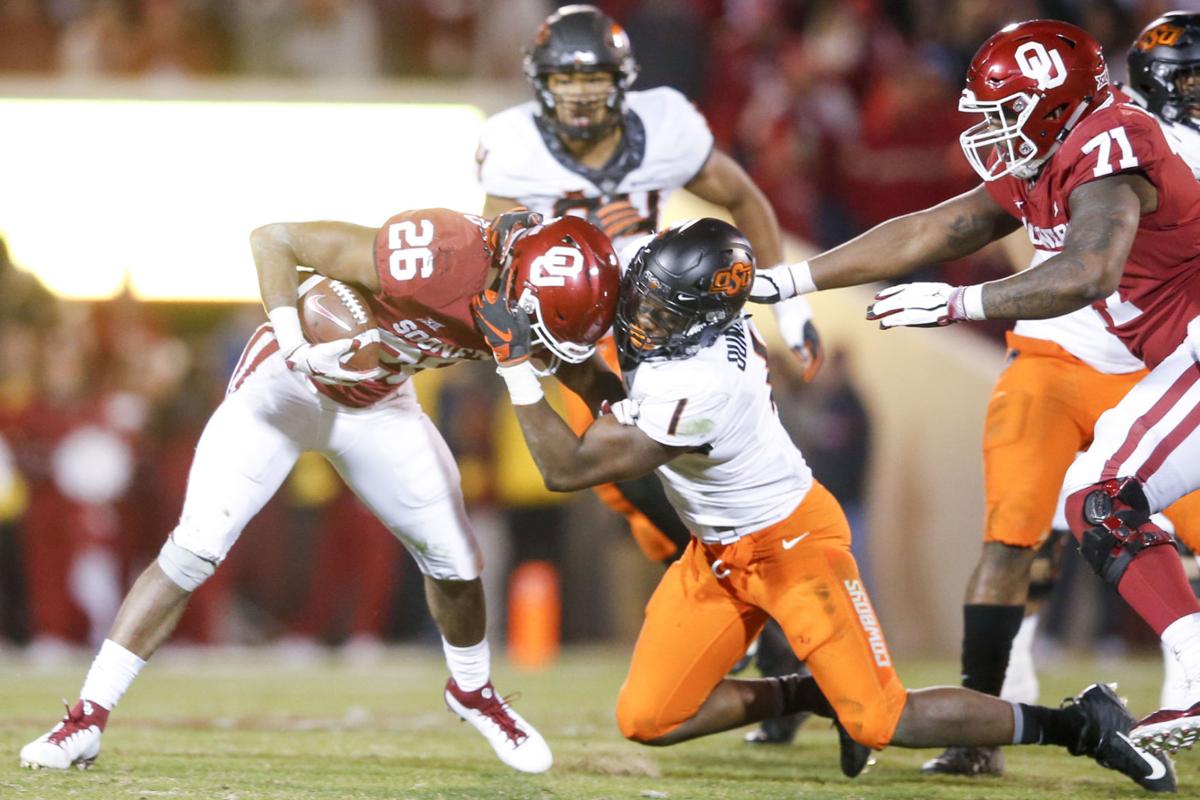 Bundage missed all of last season with a back injury and hasn’t played in a game since the 31-24 loss to TCU on Nov. 24, 2018. He will suit up for his first game in more than 660 days when the Cowboys host Tulsa for the season opener at 11 a.m. Saturday.

Bundage’s return wasn’t easy. He visited at least seven doctors over the past year, trying to get back on the field.

“... They said it was a big deal and you shouldn’t play football, but I went to a great doctor and he fixed it,” Bundage said. “People shy away from back surgery, but I guess mine turned out good.”

Bundage said he hasn’t felt this healthy in a long time. The 6-foot-1, 220-pound fifth-year senior said he feels just as healthy today as he did coming to Stillwater his freshman year.

“Before I even messed up my back, my back was messed up before that, so I never really played fully healthy,” Bundage said. “But I didn’t know I wasn’t healthy, so now it’s just a big difference.”

Multiple OSU players have attested to Bundage’s enthusiastic play during fall camp, but OSU coach Mike Gundy said there is always caution with a player returning from an injury as serious as his. Gundy was holding his breath until he saw Bundage make tackles in practice.

“I was hoping that he would be there tomorrow and kind of push through it and he’s done well,” Gundy said. “You’re always a little cautious just based on an injury to a player and hopefully it will hold up and he can play this season. It’s really kind of changed his life just getting back on the field.”

Now that he’s back in football shape, Bundage is out to prove he can still play at a high level.

“It feels good to just put everything at rest and just prove I’m the best,” Bundage said. “I feel like I came back better than last time, a better player this year.”

Malcolm Rodriguez and Amen Ogbongbemiga held it down for the linebacker group while Bundage was gone. Now that he’s back, Bundage said he has no idea what his role will be.

The Cowboys have a solid group of linebackers with Rodriguez, Ogbongbemiga, Bundage and Devin Harper. Gundy told media on Monday that because OSU plays two-deep on defense, Bundage will be able to get as much playing time as he wants. Gundy is just happy to see Bundage healthy again, he said.

“I was hoping that Calvin could come back and play for him moreso than the team,” Gundy said. “Just based on for a coach, it’s just tragic when you see a young man that can’t compete but he still wants to play the game. … I’m really excited for him. His attitude, his posture and demeanor over the last two months have been fabulous. He’s smiling again, so I’m just happy that he gets to get back on the field because he loves to play football.”

Breaking down the 2020 schedule

Broadcast schedule and how to get tickets

Here's a look the annual salaries of head coach Mike Gundy and his 10 assistants.

Breaking down the offense

Breaking down the defense

How much direction did coaches have during uncertain times? 'None. Zero. Nada.'

Guerin Emig: Many questions about the college football season, and no answers

In front of his Walmart co-workers, OSU walk-on Dee Mitchell gets scholarship from Mike Boynton

OSU football: Kolby Harvell-Peel is no longer headed to the 2021 NFL Draft and returning to Stillwater

Oklahoma State safety Kolby Harvell-Peel has withdrawn his name from the 2021 NFL Draft, he announced on Monday.

The new date is just two days before OSU is scheduled to play in Norman at 2 p.m. on Feb. 27. Both teams will end the regular season by playing each other twice in three days.

Oklahoma State men’s basketball is has been cleared to resume practice on Thursday, the Tulsa World confirmed.

"Seeing everybody outside and seeing the camera all in my face I realized what the moment was about and it was special from the moment it started," Mitchell said.

Oklahoma State’s Calvin Bundage (right), celebrating a sack in a 2018 game against Missouri State, missed all of last season with a back injury. 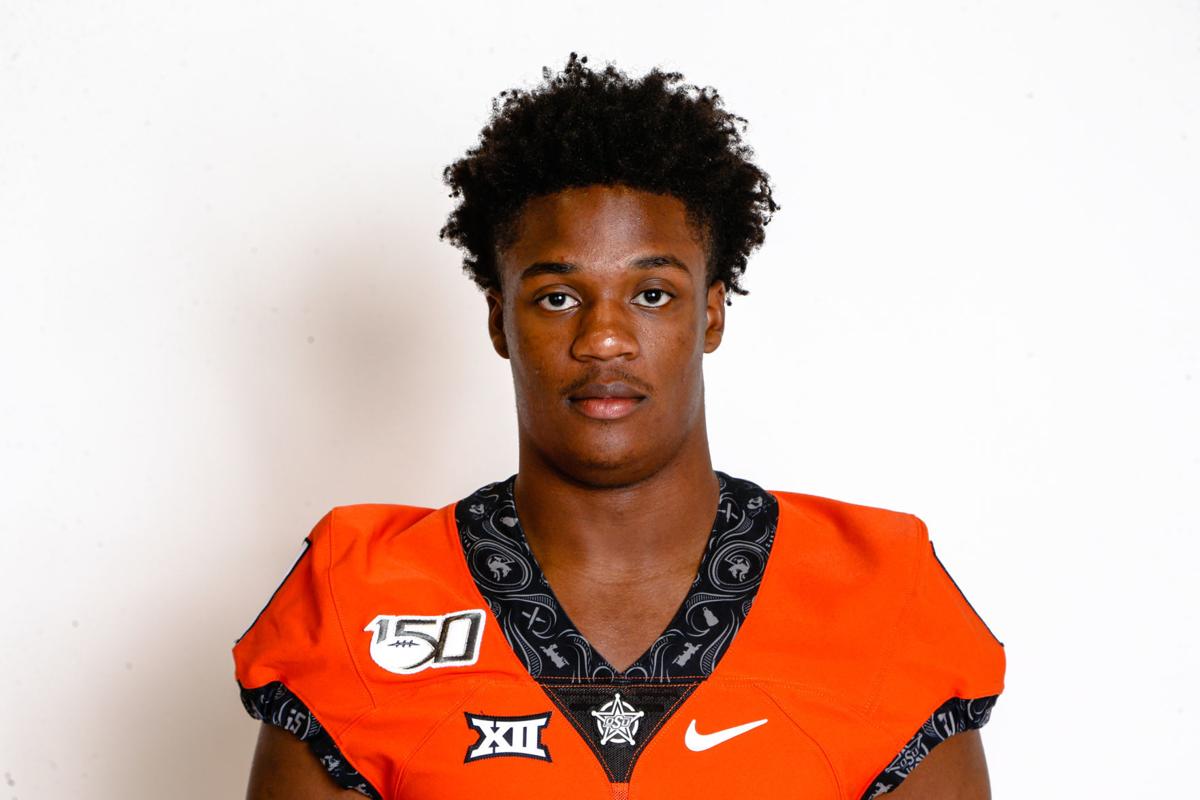