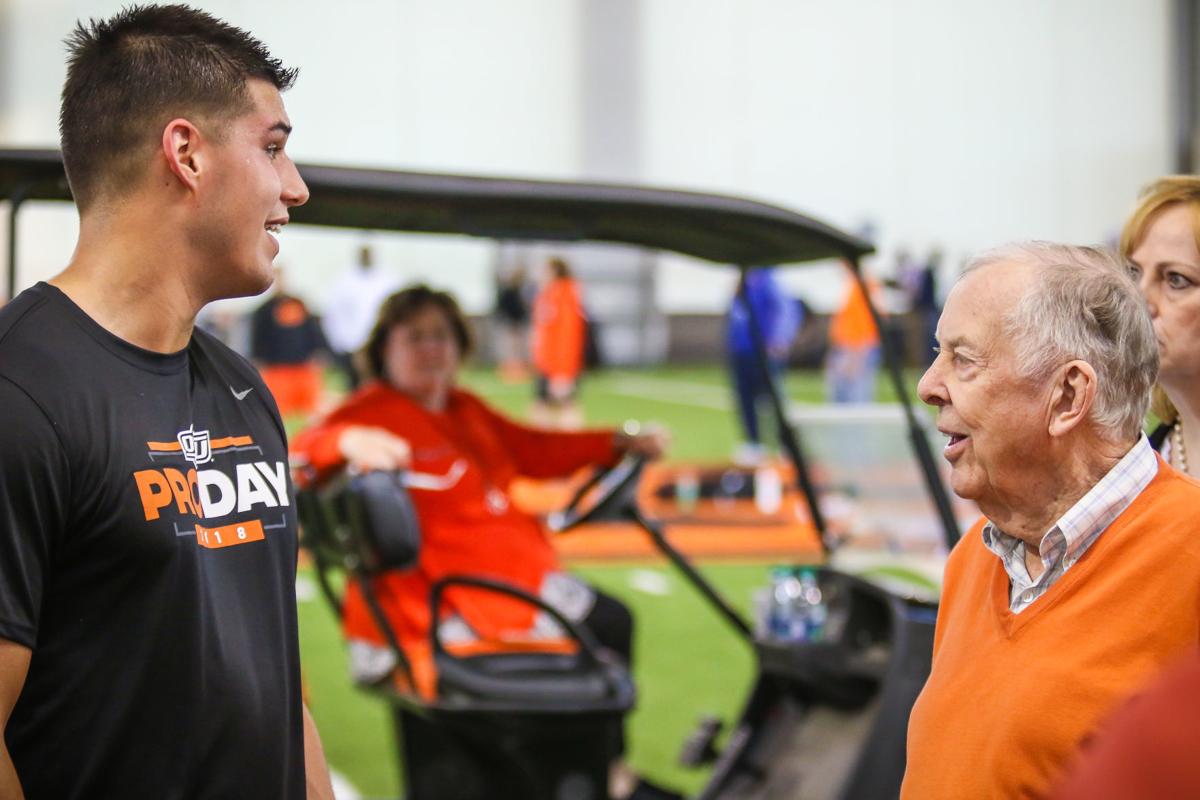 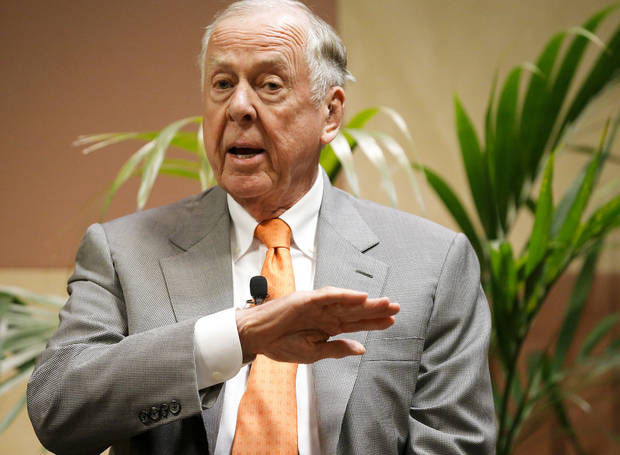 T. Boone Pickens talks at his birthday bash during the Southern Republican Leadership Conference at the Cox Convention Center in Oklahoma City, Okla. on Friday, May 22, 2015. CHRIS LANDSBERGER/The Oklahoman

The Oklahoma State family lost a big piece of its program when T. Boone Pickens died Wednesday at 91.

Pickens, a 1951 Oklahoma A&M graduate, earned just over $1 billion through oil and gas investments, and he wasn’t shy about sharing.

“You’d be hard-pressed to find anyone who has had a greater impact on a university than Mr. Pickens has had at Oklahoma State,” football coach Mike Gundy said in a statement released by the school. “He’ll be missed, but his legacy here will live on for a long time to come.”

Pickens also established countless relationships with players over the years. Pickens was close enough to former OSU quarterback Mason Rudolph to receive a personal invitation to his pro day in 2018, and Pickens made sure to be in attendance. Former quarterback Brandon Weeden also had a close relationship with Pickens.

“I was very fortunate to have a friendship with such a great man,” Weeden said. “Mr. Pickens was not only a pioneer, but he was someone who influenced everyone he came in contact with. He was a true competitor in everything he did.

“His contributions are a big reason why Oklahoma State is what it is today. I want to send my thoughts and prayers to his family.”

The Cowboys went 23-3 in Weeden’s two seasons as a starter. OSU earned its only Big 12 Conference championship in 2011. Many former OSU players from past decades credit much of OSU’s recent success to Pickens.

Former OSU tight end Don Echols, who played from 1977-79 and still lives in Stillwater, said Pickens was the ice breaker for other alumni to start pouring money into OSU sports.

Echols’ former teammate, offensive lineman Reggie Richardson, echoed that sentiment by saying it was Pickens’ donations that helped OSU get quality recruits because of the facility improvements.

“If it wasn’t for his lovely donations and recruiting, come on, man, there wouldn’t be no Oklahoma State,” Richardson said.

A piece of Pickens’ legacy will always be about him helping the Cowboys win on the field, but he went out of his way to treat players like family.

Richardson reminisced in a phone interview Wednesday about the first time he met Pickens. He and former quarterback Harold Bailey were introduced to Pickens in his suite during a game. Pickens recognized them from their playing days and welcomed them to partake in whatever they liked.

Richardson appreciated Pickens’ approachability and said he “was like one of the fellas.” Richardson continued to see Pickens at OSU football games from the early 2000s until about a year ago.

“It was very exciting,” Bailey said about the first time he met Pickens. “He treated me like I was actually one of the group. I was thinking somebody that’s worth millions of dollars and here I am just an ex-student and ex-athlete that just came back, and I was introduced to him. He treated me just like I was a regular person. I was impressed by him and his wife.”

The efforts Pickens put forth to create a bond with the older players didn’t go unnoticed.

“He reiterated it was a family type of atmosphere,” Bailey said. “He wanted the old players to be engaged so we as a group could be like a family, and we can teach the young guys that this is what OSU is all about. It’s just not all about football or basketball or baseball. It’s all about being a family and being a close-knit organization.”

Pickens is no longer with the OSU family in person, but he will continue to live in the Cowboys community in spirit and attitude.

“The greatest Cowboy of them all has taken his last ride,” said Mike Holder, the Oklahoma State athletic director, “It will never be the same again. We could never thank him enough for all that he did for our university.

“He gave us everything he had and all that he asked in return was that we play by the rules and dream big. He was living proof that anything is possible if you’re wearing orange. Great ride Cowboy, great ride!”

Pickens poured close to $600 million back into OSU’s academics and athletics. His $165 million donation to the athletic department is the largest single athletics donation in history. His generosity helped turn the OSU facilities into what they are today, including the 55,509 capacity Boone Pickens Stadium.

Oklahoma State junior basketball player Dee Mitchell is no longer a walk-on after OSU surprised him with a scholarship.

Guerin Emig: Pleasure of sports dimmed by plundering of facts in real world

T. Boone Pickens talks at his birthday bash during the Southern Republican Leadership Conference at the Cox Convention Center in Oklahoma City, Okla. on Friday, May 22, 2015. CHRIS LANDSBERGER/The Oklahoman