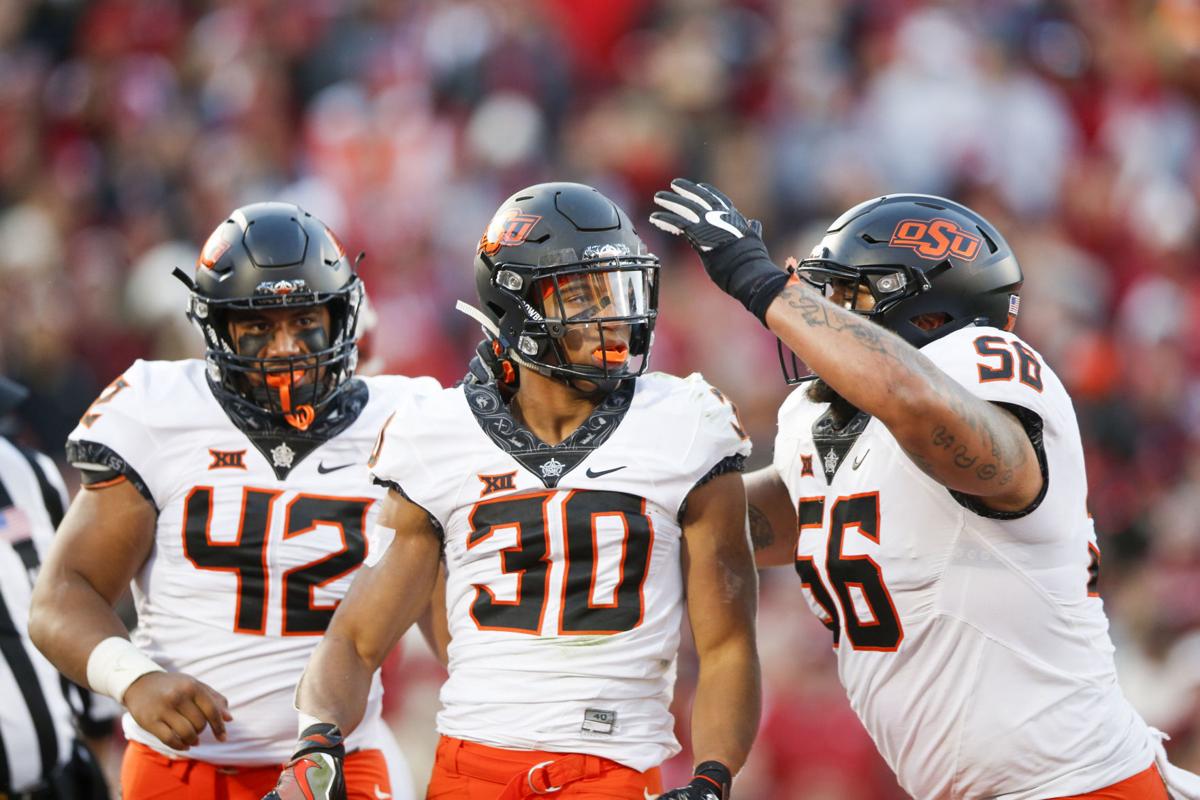 Chuba Hubbard (center) and his Oklahoma State teammates will need to ramp up their production to keep up with Oklahoma on Saturday night. Ian Maule/Tulsa World 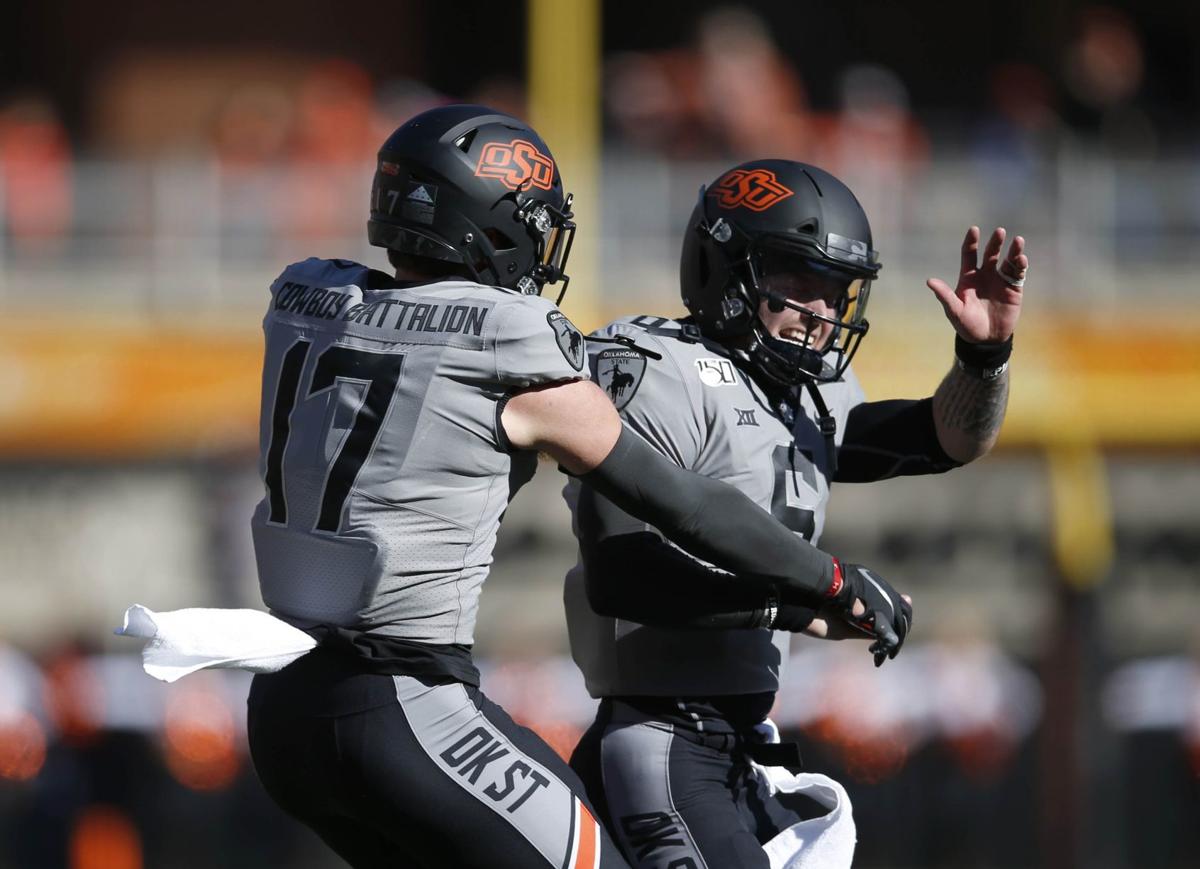 Because of injuries to two key Oklahoma State playmakers, Dillon Stoner (left) has slid over to Tylan Wallace’s outside receiver position and quarterback Dru Brown (right) has stepped in for Spencer Sanders. MATT BARNARD/Tulsa World 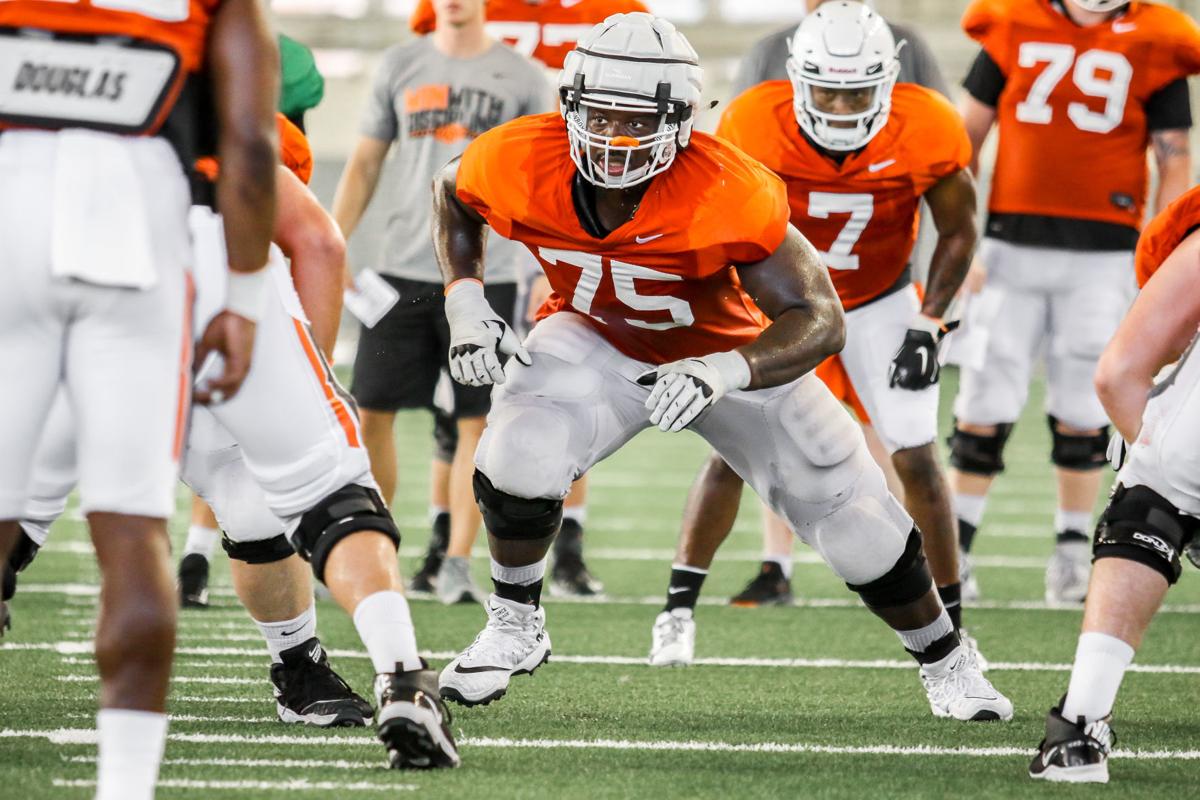 Because of injuries, guard Marcus Keyes was the only Oklahoma State offensive lineman who started at his regular position on Sept. 28 against Kansas State. Devin Lawrence Wilber/for the Tulsa World, file

Chuba Hubbard (center) and his Oklahoma State teammates will need to ramp up their production to keep up with Oklahoma on Saturday night. Ian Maule/Tulsa World

Because of injuries to two key Oklahoma State playmakers, Dillon Stoner (left) has slid over to Tylan Wallace’s outside receiver position and quarterback Dru Brown (right) has stepped in for Spencer Sanders. MATT BARNARD/Tulsa World

Because of injuries, guard Marcus Keyes was the only Oklahoma State offensive lineman who started at his regular position on Sept. 28 against Kansas State. Devin Lawrence Wilber/for the Tulsa World, file

Oklahoma State offensive coordinator Sean Gleeson and offensive line coach Charlie Dickey have had to deal with some major injuries in their first season coaching for the Cowboys.

Injuries along the line have caused Dickey to shuffle positions on numerous occasions, but the O-line has continued to open holes for running back Chuba Hubbard, who has emerged as a Heisman Trophy candidate.

The offensive line is back in full health heading into the Bedlam game against Oklahoma at 7 p.m. Saturday at Boone Pickens Stadium. However, the offense will be without last year’s Biletnikoff Award finalist, receiver Tylan Wallace (knee surgery) and dual-threat redshirt freshman quarterback Spencer Sanders (thumb surgery).

Wallace suffered a season-ending knee injury during practice three days before the ninth game of the season against TCU and Sanders injured his thumb against Kansas four games later. The Cowboys have stayed the course, no matter the situation.

“One person goes down, the next man’s up,” Hubbard said. “So we don’t need to change anything. We don’t need to do anything like that — we just keep our foot on the gas.”

The Cowboys kept their foot on the gas when Hubbard rushed for a career-high 296 yards against Kansas State, despite injuries to offensive linemen Dylan Galloway and Teven Jenkins. Dickey was forced to play musical chairs that day, as Marcus Keyes was the only starter who played the same position as the week before. The new-look offensive line helped OSU post a 26-13 win over the Wildcats.

Wallace had caught 40% of Sanders’s completions at the time of his injury, with 53 catches for 903 yards and eight touchdowns in eight games. The Cowboys had less than three full days to prepare for his absence, and Dillon Stoner was moved to Wallace’s outside receiver position from the slot. Stoner caught three passes for 93 yards and scored his first two TDs of the season to help the Cowboys defeat TCU 34-27.

Stoner has caught 16 passes for 305 yards and five TDs in the three games following Wallace’s injury. He had a combined 232 receiving yards and no touchdowns in the first eight games.

Most teams have their share of injuries throughout a football season, but the Cowboys have had more than most. They have lost two of their top three playmakers on offense, have had to shuffle the offensive line on occasion and have had multiple injuries on defense, including linebacker Calvin Bundage, who hasn’t played all season.

The coaching staff fixed its linebacker problem by moving safety Malcolm Rodriguez to linebacker. He leads the Cowboys with 83 tackles.

Overall, OSU has done a solid job filling in the missing pieces.

“That’s a huge testament to our coaches,” Stoner said. “And also a big-time testament to the guys and always staying positive, ready for whatever is coming at us. You’re never going to have the perfect season. You’re always going to have guys hurt, but we were able to just keep our head down and keep going.”

Brown isn’t as mobile as Sanders, but his 196 yards and two TDs at West Virginia last week were enough to extend the Cowboys’ winning streak to four games with a 20-13 victory over the Mountaineers. Three of the past four wins have been without Wallace, and the Cowboys didn’t have Wallace or Sanders in last week’s win.

“That’s a credit to the staff here,” Gleeson said. “And then obviously when those guys go in and perform the way that they do, I just think it speaks to them as human beings, as well.

“I think we’ve got an incredible development culture. I think our strength and conditioning staff, and the way that coach (Mike) Gundy has trusted his assistants to really develop guys is a great benefit to this program. And then on top of it, our guys go in and they do the job. We as coaches aren’t playing, so it feels good to see them go out there and fill in and do a good job.”

The Cowboys have defeated TCU, Kansas and West Virginia in their past three games. None of them has the firepower of Oklahoma, which boasts the No. 1 offense in FBS. OSU managed a season-low 285 total yards in its win last week and will need more production to keep up with the Sooners. Wallace’s absence leaves a hole; he had 10 catches for 220 yards and two TDs last season in the Cowboys’ 48-47 loss in Bedlam.

Highlights from OSU's win over Kansas