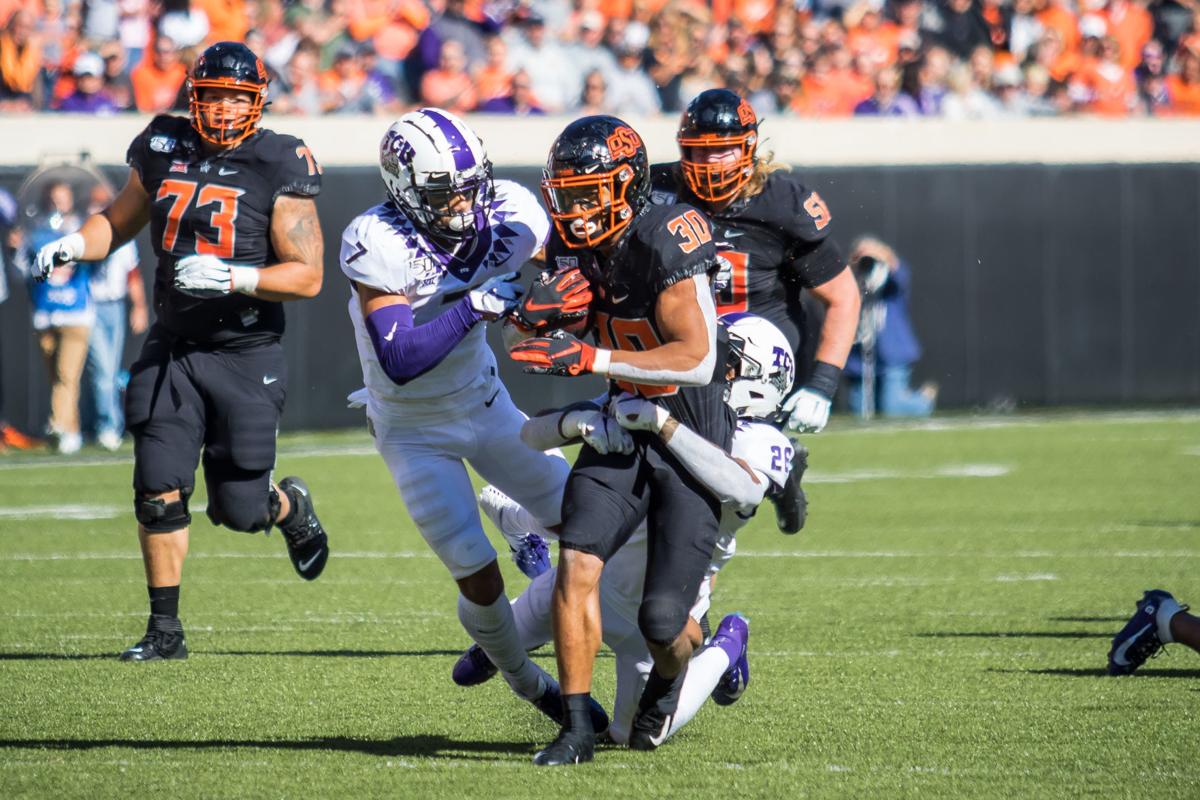 Dragging TCU defenders on a run on Nov. 2, Oklahoma State running back Chuba Hubbard — a former track standout — shows off his combination of speed and strength. Devin Lawrence Wilber/for the Tulsa World, file 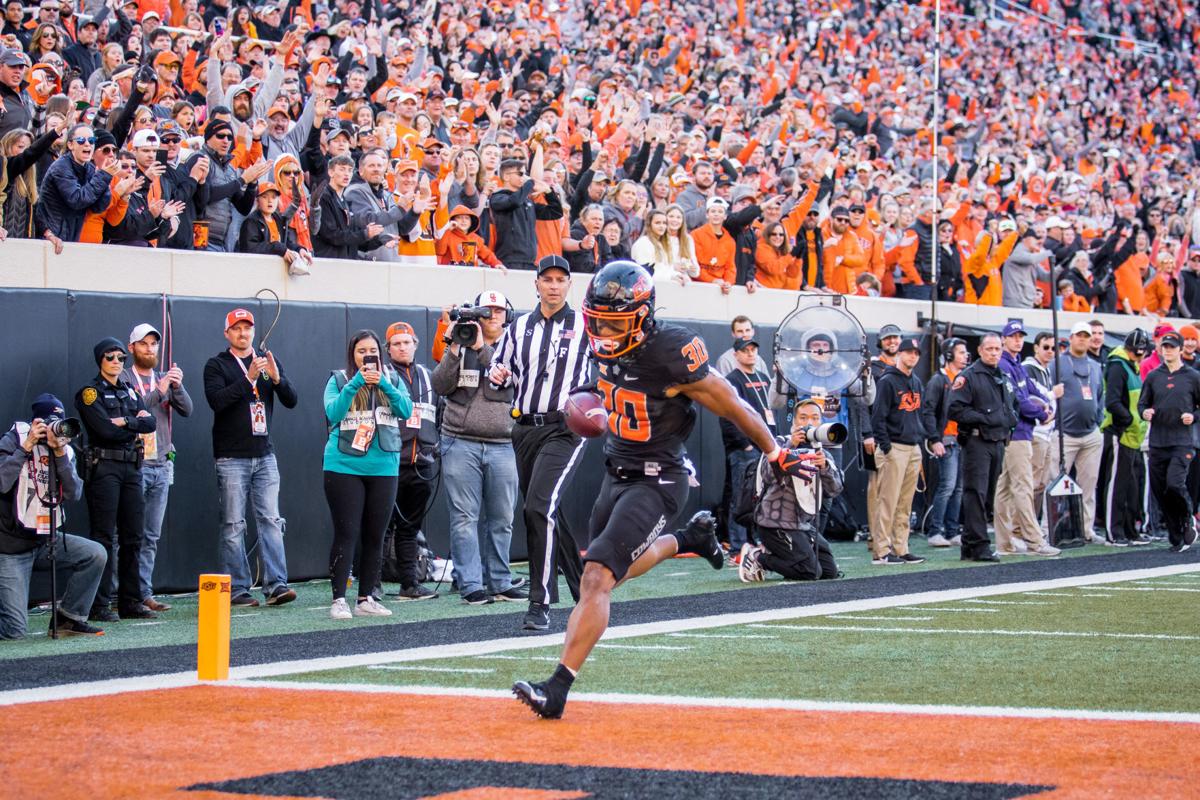 Chuba Hubbard, a track standout in his native Canada before coming to Oklahoma State to play football, crosses the goal line for his second touchdown of the day against TCU on Nov. 2. Devin Lawrence Wilber/for the Tulsa World, file 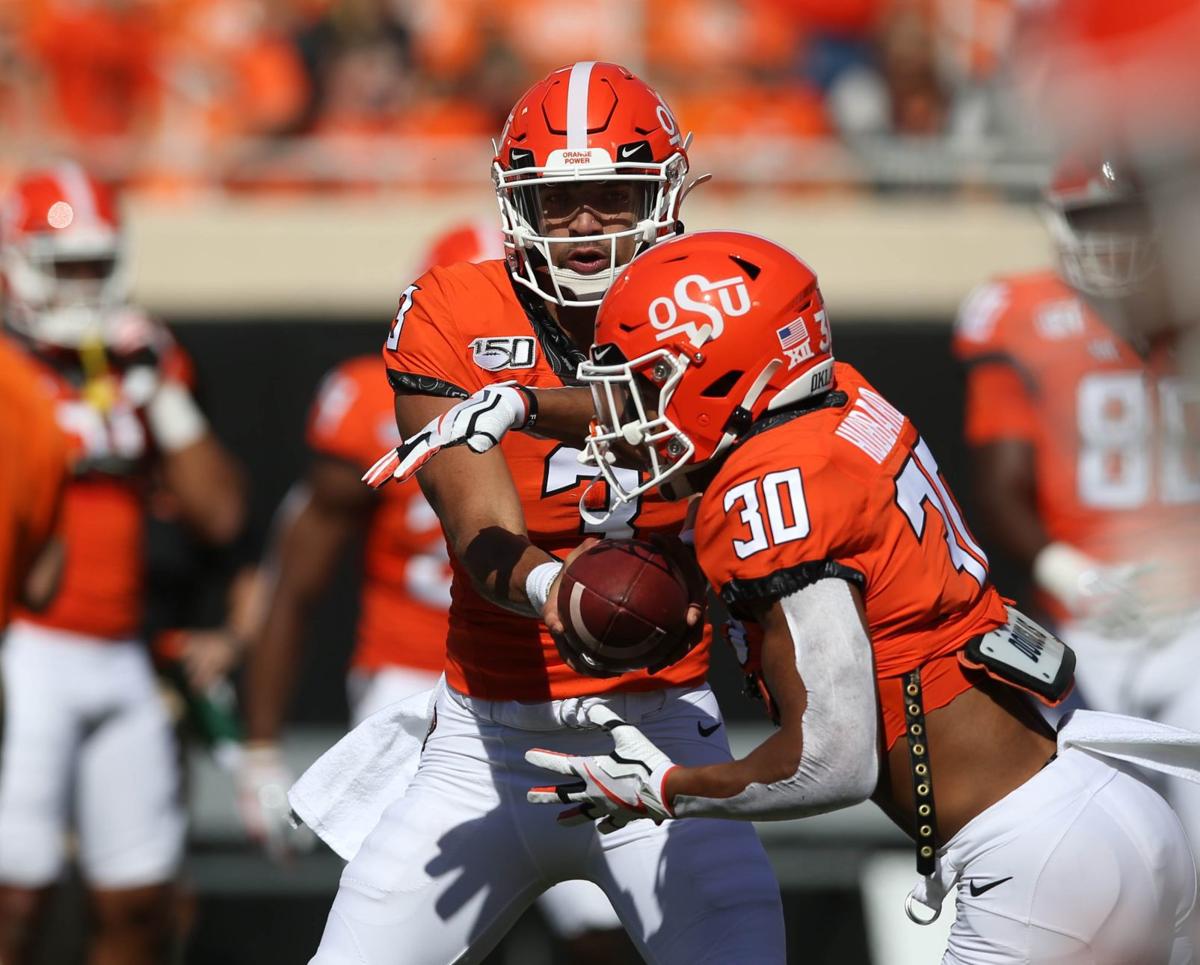 After Oklahoma State running back Chuba Hubbard scored on the fourth-longest rushing play in OSU history, a 92-yard sprint to the end zone against TCU, OSU track and field sprints coach Giles McDonnell received a text from his friend.

“Man, that guy looks like he runs some track.”

Hubbard is known primarily for his spectacular play on the football field, but track was his first love. The 6-foot-1, 207-pound sophomore from Alberta, Canada, started running track when he was about 6 years old.

“My mom wasn’t having it,” Hubbard said about football. “But one day she gave in and then, yeah, I just gave it a go.”

About a decade after the first time he played the sport, Hubbard has become college football’s leading rusher with 1,832 yards to put him in the race for the Heisman Trophy as the nation’s top collegiate player, as well as the Doak Walker Award, given to the best running back. Hubbard looks to be on his way to a bright future in the NFL, but his path wasn’t always headed toward football.

“At one point in my life. I thought track was going to be everything for me,” Hubbard said. “I was getting pretty good at it, but you never know what can happen. I always kept football there, I always kept track there.”

Hubbard said he made the switch to football as his dominant sport when he left Canada for Oklahoma State.

“It wasn’t like track was over,” Hubbard said. “I was just like football took up so much time on a football scholarship. I still do track here, but football was kind of like my main thing, so I just took it as that.

“Like I said, track is still in my back pocket, so depending on what happens I’ll probably be in it next year, so we’ll see.”

Hubbard plays football with the perfect mix of speed and power. He can beat most defenders in a foot race, which is why he leads the country with 17 runs of 20 yards or more, including five games of at least one run of over 50 yards. He also leads the nation with 1,152 yards after contact.

“He’s very powerful,” OSU coach Mike Gundy said. “He’s highly intelligent and he has the ability to make a move five yards away from a guy and he knows how that moves ties in with his speed to where that guy can’t tackle him.”

Gundy gives a lot of credit to strength and condition coach Rob Glass for helping develop Hubbard’s football ability, but Hubbard’s track and field development also plays a significant role in his accomplishments on the field.

According to Andy Ryland, USA Football Senior Manager of Education and Training, track workouts help improve the power and acceleration needed for a football running back.

“Especially a guy like we’re talking about who specializes in the sprints, the start is so important,” Ryland said. “So having good acceleration mechanics — which is something you would learn from high-quality track coaches — allow you to accelerate with the greatest efficiency, the greatest speed, the greatest power. And obviously, this is coupled with the weight room work and maturity and all those other things.”

USA Football is the sport’s national governing body and a member of the U.S. Olympic & Paralympic Committee. Playing multiple sports is a core pillar of USA Football’s Football Development Model, which claims to be the first long-term athlete development model in the sport’s history. Ryland said playing multiple sports as a young athlete helps further the athlete’s development.

Both sports have some similar workouts. Hubbard said the sled work the Cowboys do in the offseason is similar to the sled work done in track. The sled pulls are when an athlete runs while pulling a sled with a set weight on it. McDonnell calls it resistance training. Resistance training helps with power and acceleration.

“You can come to almost any track and field practice and you’re going to see some type of resistance-type training, so like sled pulls,” McDonnell said. “We’ll do sled pulls for like 20, 30, 40 meters, and the weight is just determined by the athlete’s ability in terms of what kind of strength level they have, their body size and stuff like that.”

One of Hubbard’s strengths on the football field is how quickly he can burst through the hole and reach the secondary of the defense. Ryland said the stop-and-start nature of football makes it more of an acceleration-based game. He said the true track workout gives athletes exposure to maximum velocity training, which is when an athlete reaches their top speed.

Hubbard’s 285 carries is second in the nation behind AJ Dillon’s 286 for Boston College. Hubbard’s 33 touches in the 20-13 victory at West Virginia last week was his fifth game this year with more than 32 touches. The max velocity training in track has also helped with handling the workload, according to what Ryland described as the relative speed affect.

“The faster we are the less the average play is in terms of my effort,” Ryland said. “And then obviously the max speed is going to, one, help us create power as we can accelerate and create force into contact.”

“A slow athlete has to work at 70% speed to keep up with the offensive line and find the hole,” Ryland said. “A faster athlete is only operating at 60% intensity. But when they do see that hole and go to accelerate, there’s a little more gas there. ... When it is time to put the hammer down, that’s when we see guys have that extra gear because there is still room left for them to accelerate to get to that top speed.”

Hubbard has been a consistent playmaker for OSU and riding Hubbard is the Cowboys’ best chance of beating Oklahoma in the Bedlam game at 7 p.m. Saturday.

His two-sport background has prepared him for the moment. The second game of the season against McNeese State was Hubbard’s only game of the year in which he didn’t reach 100 yards. He gained 44 yards on just eight carries, but he’ll get significantly more touches against the Sooners.

1. Hubbard is the youngest of four children.

Hubbard has two brothers and a sister. His family is a big part of why he came to Oklahoma State.

“I just want to make them proud and to be able to take care of them at the end of the day, “Hubbard said. “So that’s part of all of this.”

2. Hubbard looked up to Adrian Peterson growing up

When Hubbard was asked which football player he looked up to growing up his response was “I guess I shouldn’t say this but Adrian Peterson.” Peterson played for Oklahoma from 2004-06 and currently plays for the Washington Redskins. Peterson was viewed as one of the best running backs in the league during his prime.

“That was my guy,” Hubbard said. “Just seeing him, he’s like a workhorse, explosive. I remember I used to watch his highlights before every game.”

When Hubbard first started playing football at 9 his first position was wide receiver.

“I just kind of did like receiver reveres and then they put me at running back my second year,” Hubbard said. “Then I just stayed with it.”

Hubbard isn’t a big coffee guy, but he enjoys going to Tim Horton’s for its donut holes, which are called tid bits in Canada.

“Tim Hortons’ is a place where you go it’s a line for days,” Hubbard said. “I don’t really get coffee from there but I go there to get something to eat.”

Hubbard has been wearing No. 30 since he first started playing football at 9. He worn No. 30 ever since.

“I said I might as well stay true to it,” Hubbard said. “I was going to switch it maybe this year, but everybody knows me from 30.”

6. Hubbard and OSU teammate Amen Ogbongbemiga used to be on separate sides of their high school football rivalry

Hubbard and OSU teammate Amen Ogbongbemiga are getting ready to battle in the Bedlam rivalry against OU, but they’ve had their share of rivalry games against each other in high school. Hubbard played for Bev Facey high school and Ogbongbemiga played for Notre Dame High school.

“Amen, we met up quite a few times in the playoffs so that kind of became a rivalry with him,” Hubbard said. “… We were still cool. I mean obviously when we were playing it was head to head but after the game we would talk. We became cool and really good friends.”

7. Hubbard is a fan of the NCAA football video game

“Oh, yeah, I always used to play with Oregon and all that,” Hubbard said. “That was a fun game. I think everybody that loved football played that game at least once. I know my friend still has it. Sometimes I go back home to play it.”

9. Who got Hubbard to run track?

Track was Hubbard’s first love and his best friend Simon got him to join the track team in the first grade. Simon’s mom was the track coach

10. Who got Hubbard to play football?

Hubbard said another friend of his kept begging him to come out for the football team. His mother wouldn’t allow it until she finally said yes when he was around 9 years old. Now, he is college football’s leading rusher with 1,832 yards.

A home-and-home relationship with Alabama stands as the most prestigious piece of nonconference football scheduling in Cowboy program history.

OSU football agrees to a home-and-home series with Alabama

The Cowboys have agreed to a home-and-home series with Alabama starting in 2028.

“I think the biggest thing is just the way that our team grew so much closer towards the end,” Sydney Pennington said.

Guerin-teed it was quite a week: Hiring Kenny Gajewski to coach OSU softball among Mike Holder's wisest decisions

The Cowgirls' 2021 season has ended, but their emotional, thoughtful manager is far from finished

The Women's College World Series semifinal between the Oklahoma Sooners and James Madison begins at 3 p.m. Monday on ESPN, but was originally scheduled for Sunday night.

Dragging TCU defenders on a run on Nov. 2, Oklahoma State running back Chuba Hubbard — a former track standout — shows off his combination of speed and strength. Devin Lawrence Wilber/for the Tulsa World, file

Chuba Hubbard, a track standout in his native Canada before coming to Oklahoma State to play football, crosses the goal line for his second touchdown of the day against TCU on Nov. 2. Devin Lawrence Wilber/for the Tulsa World, file