Subscribe
Read Today's E-Edition
Share This
OSU at the midpoint: A look at how each position group has fared in the first half of the season
0 Comments
Share this

Oklahoma State is halfway through a regular season that began with five wins and remains on track for a successful year despite a double-overtime loss to TCU on Saturday.

Here’s an assessment of how each position group has played through six games:

After losing two starters who combined for almost 100 starts and dealing with a lack of depth in the spring, the Cowboys regrouped in the preseason and started to jell. The result has been mostly positive, with OSU giving up 1.33 sacks per game and producing 300 passing yards per game. Center Preston Wilson, a key figure in the offense, has been dealing with an injury the past two games and has been replaced by Joe Michalski and Eli Russ.

Spencer Sanders continues to be a magician in the Cowboy offense, ranking fourth nationally in points responsible for per game and 10th in total offense per game. Despite dealing with a shoulder issue last week, he rushed for two early touchdowns and threw for 245 yards. Wear and tear on Sanders, who doesn’t shy away from contact, is a concern. At backup is Gunnar Gundy, who threw his first college pass against Arkansas-Pine Bluff last month and finished with 128 passing yards and two touchdowns.

The most glaring weakness has been the run game, which struggled against TCU and played a pivotal role in the offense becoming stagnant in the fourth quarter. No. 1 back Dominic Richardson is the top option because of his experience, but his style is more physical than elusive. Underclassmen Jaden Nixon and Ollie Gordon, who have a combined 30 carries, will likely start to get additional opportunities in the second half of the season.

Despite having a long list of weapons, OSU has only four receivers with more than five catches through six games. The most frequent target has been Brennan Presley inside, and Braydon Johnson leads the team with 398 receiving yards but is recovering from injury. Bryson Green is having a breakout season with a team-high four touchdowns, and John Paul Richardson remains extremely clutch. Jaden Bray, who was primed to build off an impressive freshman campaign, has been sidelined all but one game with an injury.

While the numbers aren’t as high as last season, the Cowboys are still a force up front because of an overwhelming amount of depth and talent. Tyler Lacy, Brock Martin, Collin Oliver and Ben Kopenski have recorded three sacks apiece and Trace Ford leads the team with five pass breakups. On the interior, Brendon Evers and Sione Asi have held their own against some of the best offensive linemen in the country to allow the defense to deliver big plays.

Replacing Malcolm Rodriguez and Devin Harper was a daunting task, but OSU filled their void with Mason Cobb, who took on a much bigger role, and Xavier Benson, a former Texas Tech starter. The pair has been solid in the first half of the season while combining for 48 tackles. Cobb in particular has been a playmaker, totaling 7.5 tackles for lost yardage, two sacks, six quarterback hurries and an interception.

At another position that lost both starters, veterans Korie Black and Jabbar Muhammad seamlessly transitioned into starting roles and have quietly performed well in the early going despite being frequently targeted by some of the top passing teams in the Big 12. Depth is a concern at corner, where injuries led to reserves not on the depth chart playing against Texas Tech two weeks ago.

Led by veteran Jason Taylor II, who ranks 11th nationally with 5.6 solo tackles per game, the safeties are progressing as the season wears on. Thomas Harper, who had a key fourth-quarter interception at Baylor, is settling into his role as a starter, while Sean Michael Flanagan and Kendal Daniels are splitting time at the other spot. Daniels is a high-ceiling player who recorded an interception in the opener and is tied for sixth among freshmen nationally with five tackles per game.

OSU has excelled on special teams, which has played a crucial role in several of its wins. Punter Tom Hutton, the oldest FBS player at 32 years old, has been invaluable with his ability to pin teams deep, ranking second in FBS with 58% of his punts downed inside the 20. Tanner Brown hasn’t missed in a dozen field-goal attempts this season including a career-long 52-yarder against TCU in the second overtime.

S Kendal Daniels: The up-and-comer from Beggs has shown flashes of potential early in his career and will be expected to make more big plays as he gets more experience.

RB/KR Jaden Nixon: A redshirt freshman, Nixon has the speed to be an impact player on offense after showing his ability on special teams, scoring on a 98-yard kick return at Baylor.

WR Braylin Presley: The younger brother of Brennan Presley made his first appearance on OSU’s depth chart this week but has been a contributor on special teams in his first season, downing a punt at the 2-yard line against Baylor to set up a safety on the next play.

After trailing for most of the game, No. 11 Oklahoma State scored the final 17 points to edge out 20th-ranked Texas 41-34 on Saturday night. 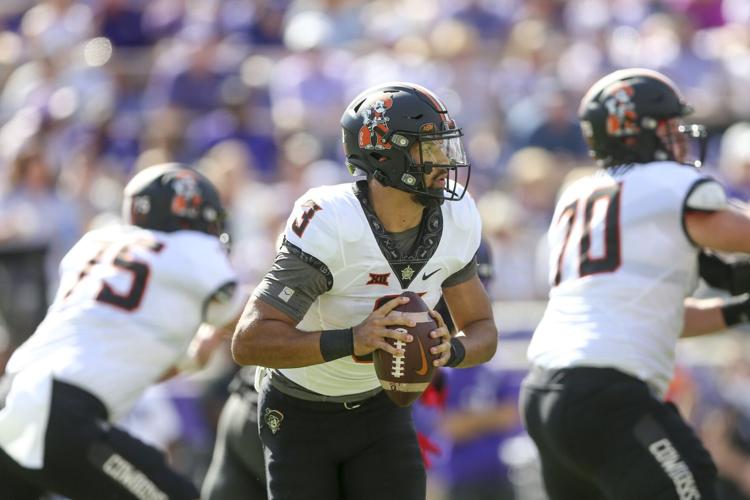 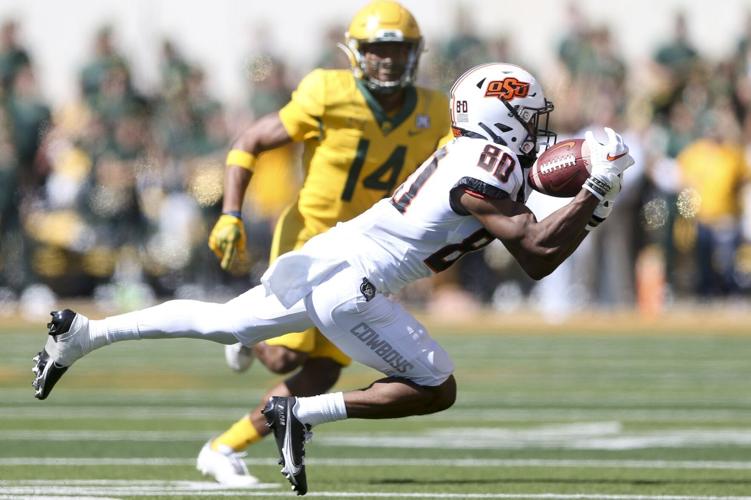 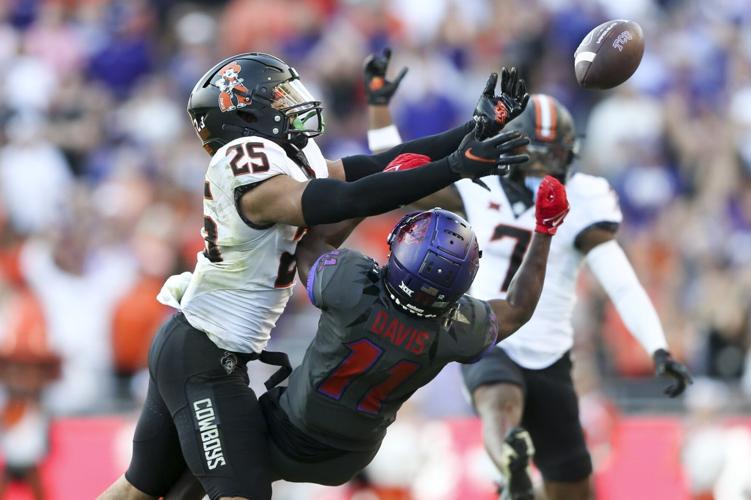 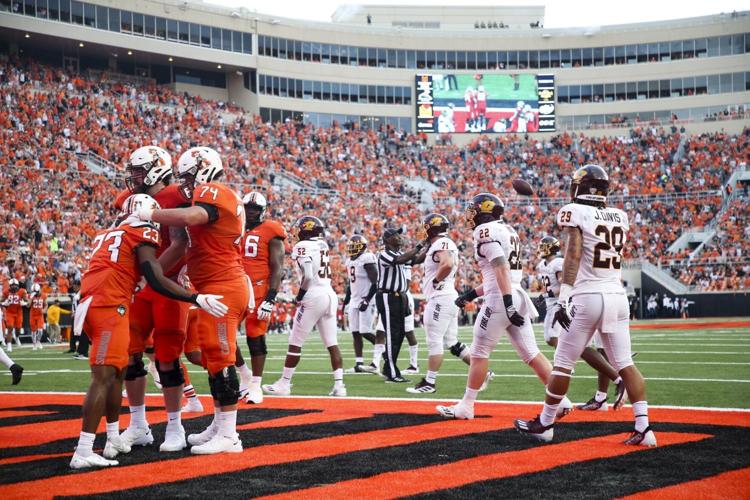 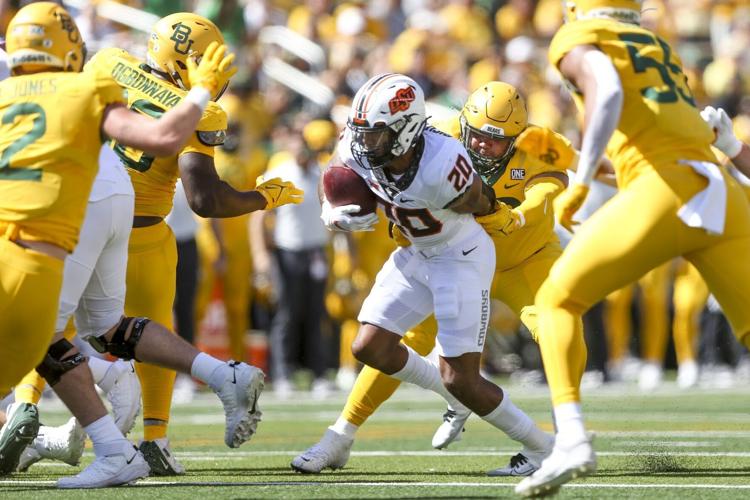 No. 1 back Dominic Richardson is the top option because of his experience, but his style is more physical than elusive. 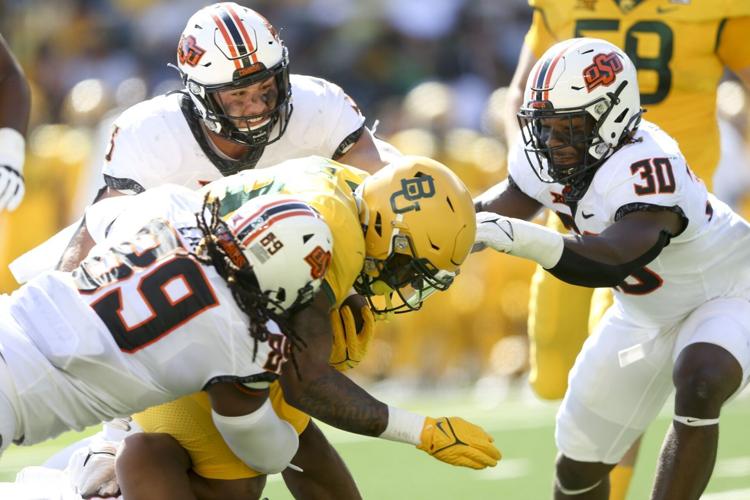 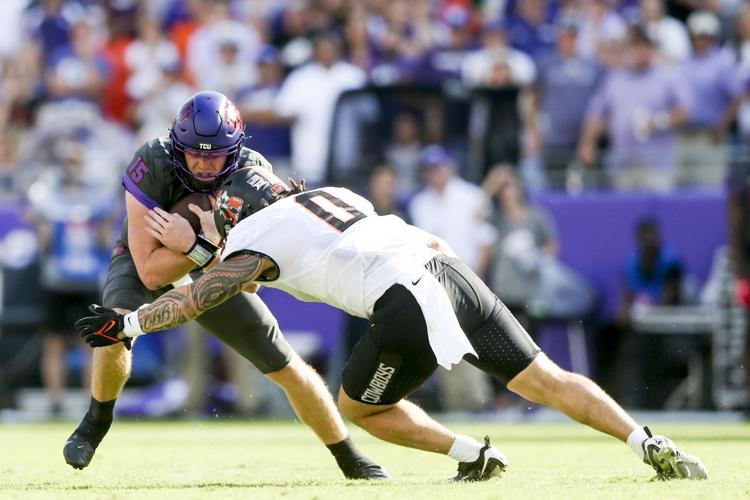 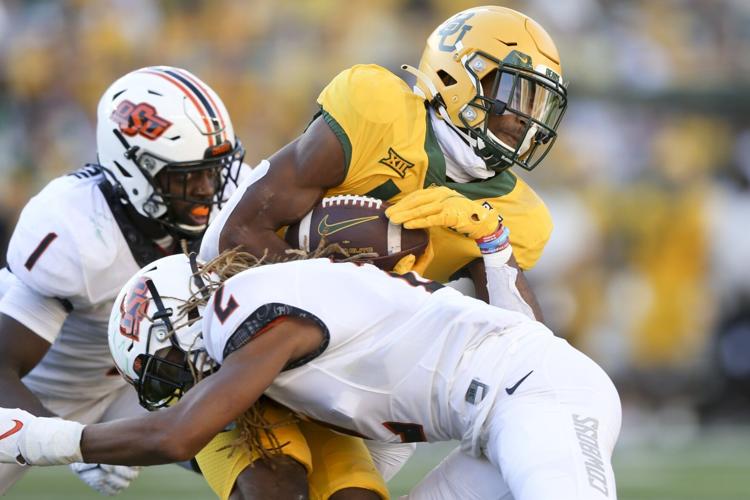 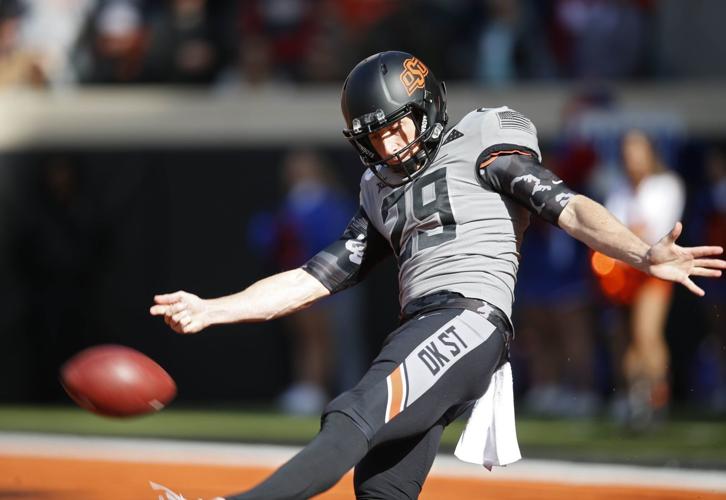 Punter Tom Hutton, the oldest FBS player at 32 years old, has been invaluable with his ability to pin teams deep, ranking second in FBS with 58% of his punts downed inside the 20. 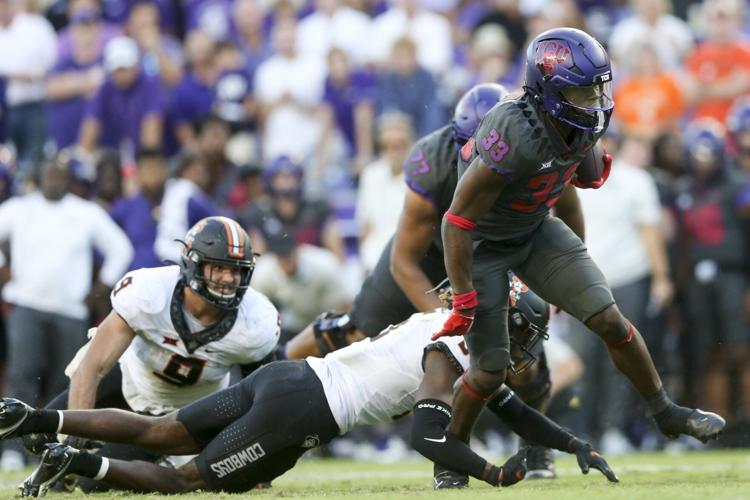 Oklahoma State safety Kendal Daniels (5) attempts to tackle TCU running back Kendre Miller (33) during the second overtime in Fort Worth.