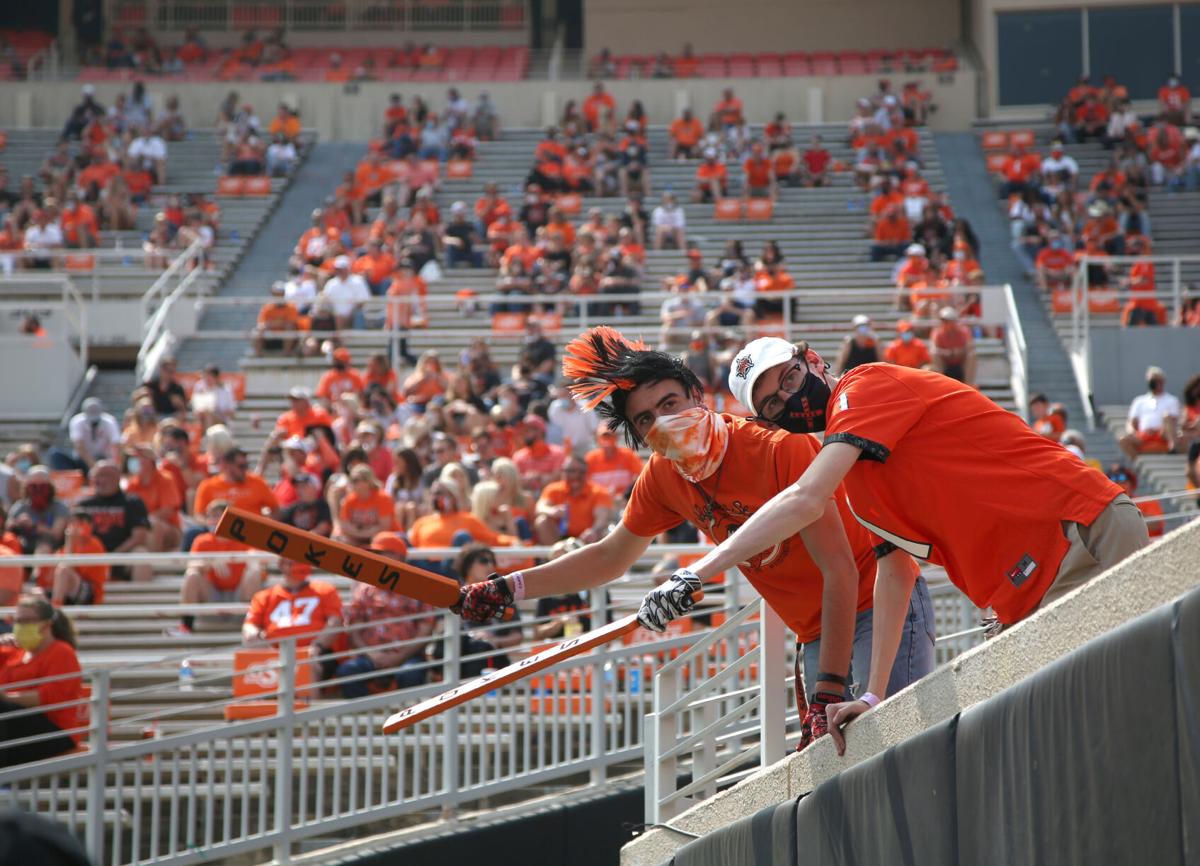 Oklahoma State students Carson Allen (left) of Sheridan, Arkansas, and Zane Wyatt of Owasso cheer for the Cowboys during the first game of the season against the University of Tulsa in Stillwater on Saturday. Attendance was limited to 14,668 because of COVID-19. 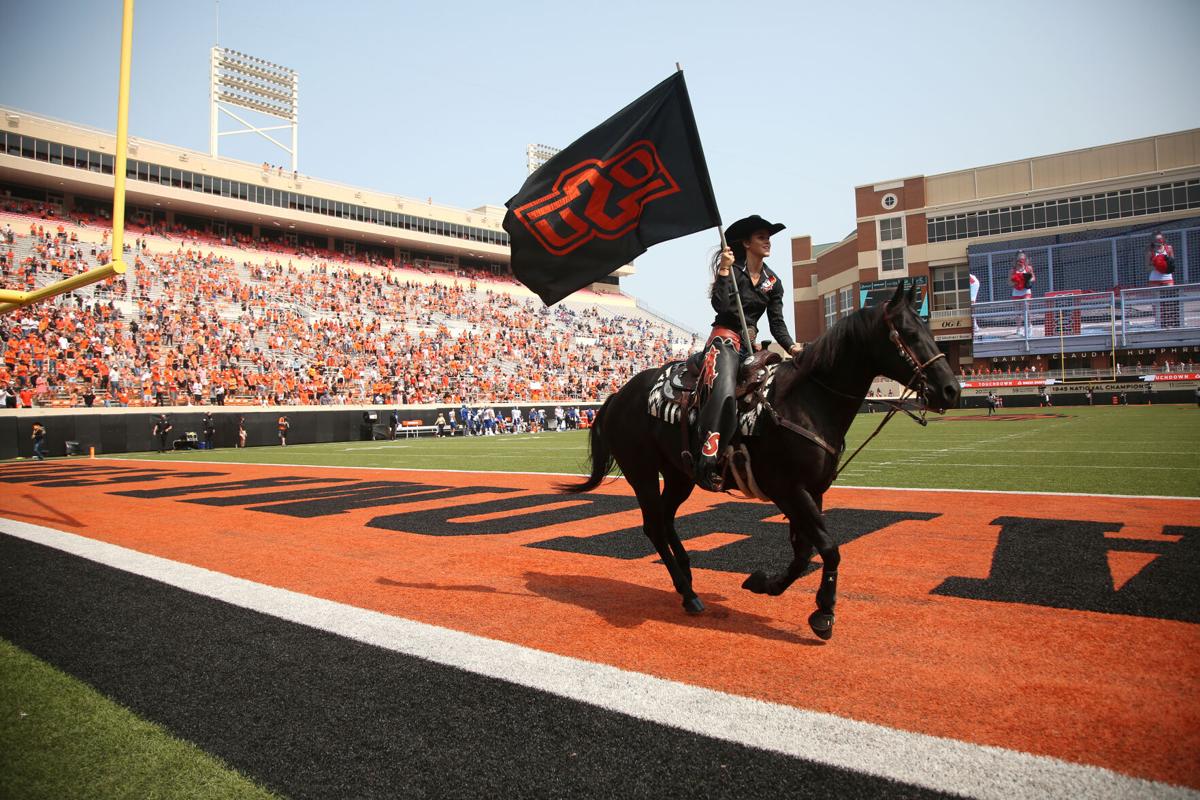 OSU student Harley Huff of Evansville, Indiana, guides Bullet across the field after the Cowboy’s only touchdown during the second half of the Oklahoma State season opener against Tulsa at Boone Pickens Stadium on Saturday. Oklahoma State won the game 16-7. 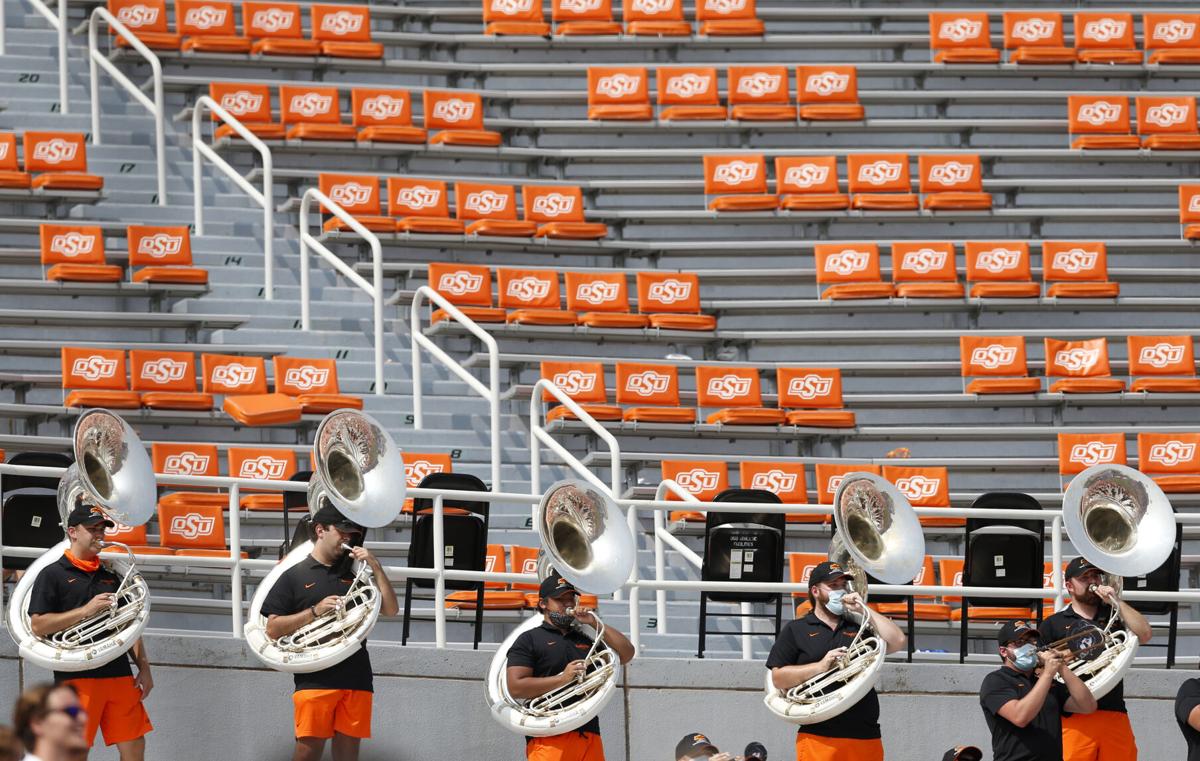 The Tuba section of the Oklahoma State band plays in front of empty seats as a result of COVID-19 precautions during the first game of the season at Boone Pickens Stadium in Stillwater on Saturday. Oklahoma State won the game 16-7.

Typically before games, thousands of orange-clad fans gather in anticipation. Because of COVID-19, tailgating is prohibited on the OSU campus this season.

Saturday was not a normal game day. For the meeting between OSU and the University of Tulsa that resulted in a 16-7 win for the Cowboys, fans were required to wear masks and practice social distancing.

OSU pumped sound into the 55,000-seat stadium between plays, and the marching band performed from the stands instead of taking the field. Despite having fewer fans, the noise level remained high.

“I thought the crowd was fantastic,” Cowboy coach Mike Gundy said. “A couple of penalties that Tulsa got on the offensive line — I believe it was because of the sound.

“(The fans) were really loud. I mentioned it to the team: The limited number of fans who were able to come to the game — they were awesome. We’re very appreciative of it. There were times that they actually got loud in the stadium.”

The game occurred a week later than originally scheduled at the request of TU, which paused preseason practice for nine days because of positive COVID-19 test results. Among the players who wouldn’t have been able to participate if the game were last week was Hurricane quarterback Zach Smith, who recently returned from a 14-day quarantine.

“It was nice to get back out there and play football,” Gundy said. “I’d like to give Tulsa credit for their game plan and what they brought into the stadium today. I thought they did a really nice job.”

Payne County, which includes Stillwater, has reached almost 2,000 cases of COVID-19 and four people have died from the virus, according to the Oklahoma State Health Department.

A look at what's on TV this weekend.

Oklahoma State students Carson Allen (left) of Sheridan, Arkansas, and Zane Wyatt of Owasso cheer for the Cowboys during the first game of the season against the University of Tulsa in Stillwater on Saturday. Attendance was limited to 14,668 because of COVID-19.

OSU student Harley Huff of Evansville, Indiana, guides Bullet across the field after the Cowboy’s only touchdown during the second half of the Oklahoma State season opener against Tulsa at Boone Pickens Stadium on Saturday. Oklahoma State won the game 16-7.

The Tuba section of the Oklahoma State band plays in front of empty seats as a result of COVID-19 precautions during the first game of the season at Boone Pickens Stadium in Stillwater on Saturday. Oklahoma State won the game 16-7.