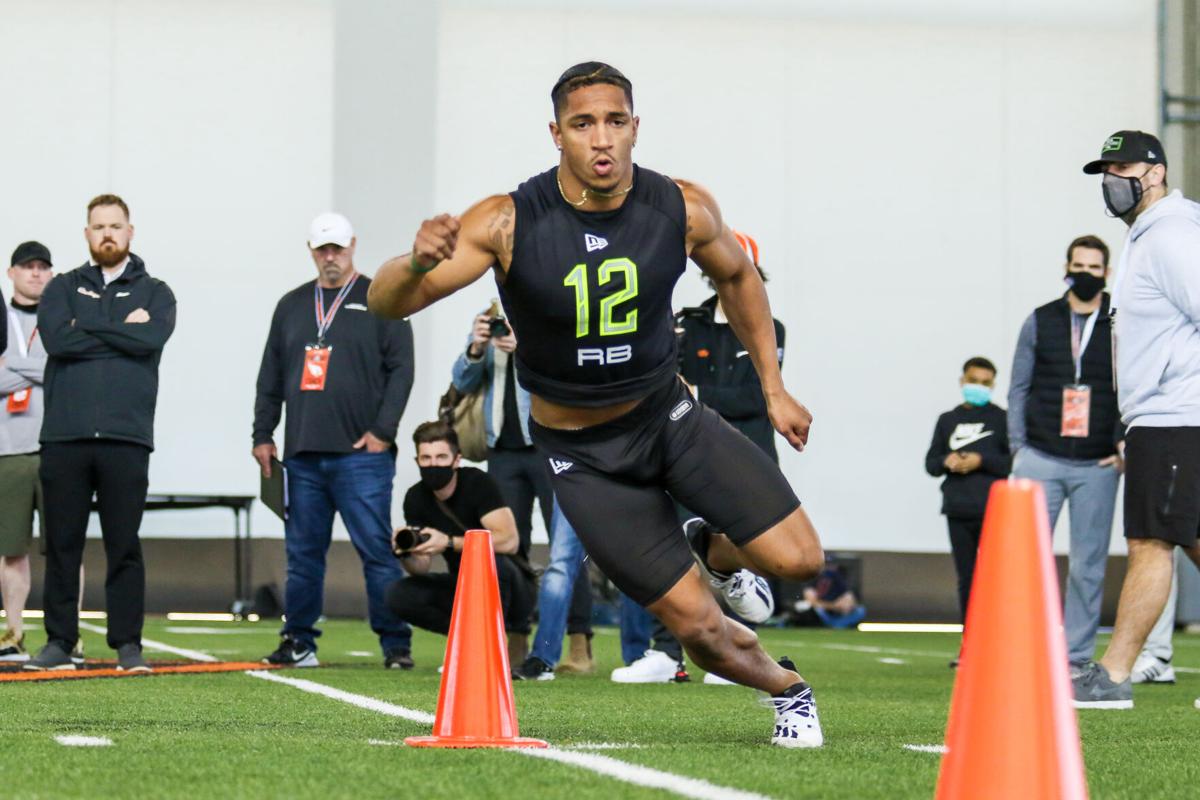 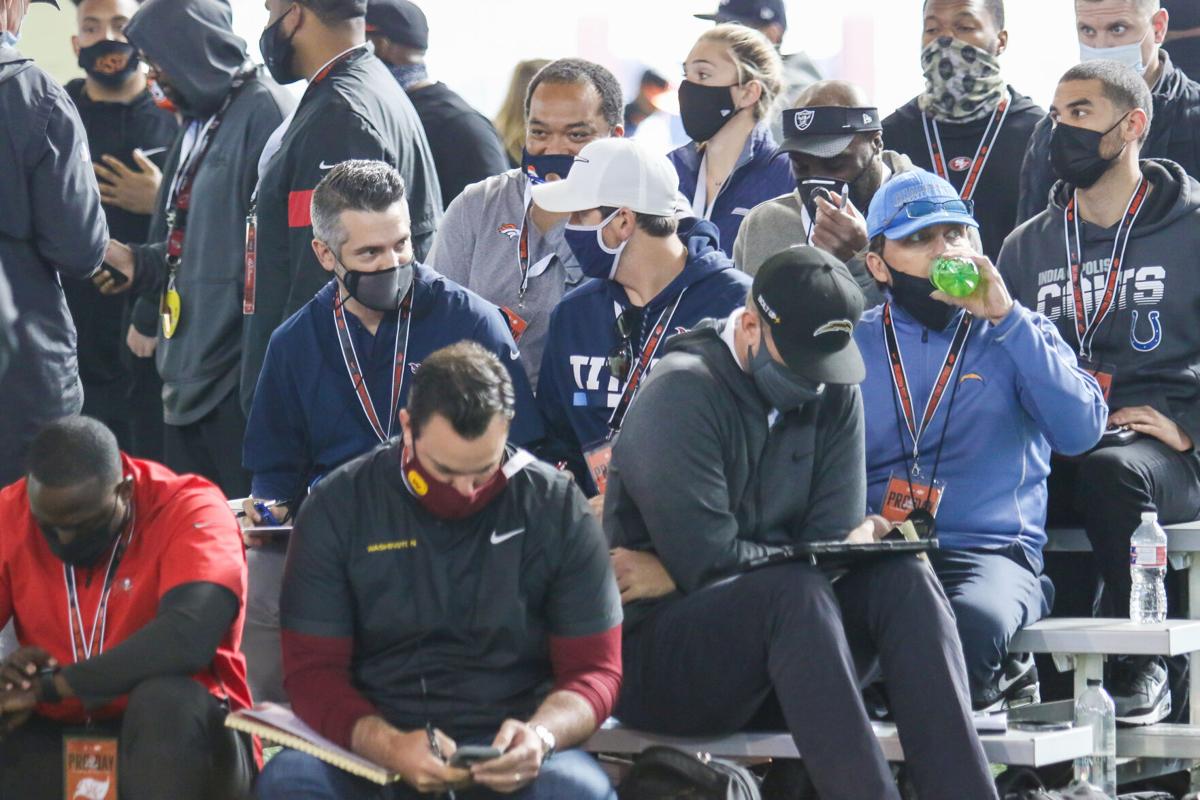 There is no in-person NFL Combine this year, which makes this year’s pro days even more important for college athletes.

Oklahoma State held its pro day Thursday morning, and head coach Mike Gundy said the pro day setting allows for NFL scouts to get a closer look at the players. All 32 NFL teams were represented to watch OSU athletes work out.

“With all of the NFL teams in attendance today, we had approximately 12 young men that were working out,” Gundy said. “And I would agree that they’re going to get a much better look than if it was in a combine setting.”

Offensive tackle Teven Jenkins is the highest-rated NFL prospect for OSU. Several mock drafts have the 6-foot-6, 320-pound lineman going in the first round of the 2021 draft.

Jenkins bench-pressed 36 reps of 225 pounds, which would have ranked third overall in the 2020 NFL Combine. He ran the 40-yard dash in 4.96 seconds and completed the L-drill in 7.72 seconds. Those marks were personal bests for Jenkins. He also posted a 4.66 in the 20-yard shuttle and a 32.5 inch vertical.

Jenkins had talks with his coaching staff coming into the 2020 season about getting more mean and aggressive on the field. He said he took that personally.

“Coming into this year, it’s definitely paid off for myself because of what I’ve done on the field and through my film,” Jenkins said. “It’s a big part of where I am in this draft because I do believe I’m the best finisher in this draft and that does set me apart from any other O-lineman.”

Hubbard said he felt good Thursday. He led the nation with 2,094 rushing yards in 2019 but battled through injuries in the 2020 season and didn’t play much in the second half of the year. Hubbard said his main focus on pro day was showing that he was healthy again.

“I was coming off two surgeries,” Hubbard said. “After that 2019 season coming into the 2020 season I kind of had some lingering issues there. And then also I had a high ankle sprain, so just to show that I’m back healthy.”

“I think I’m one of the top running backs, if not the top. Obviously this last year, people could say I had a down year. A lot of people don’t know I was coming off a lot of surgeries. There were a lot of things going on with my body and my health, but the biggest thing for me at the end of the day was just helping my team win. I know when it’s all said and done I have faith in God that it’ll work out. Wherever I get drafted, first round, seventh round, undrafted free agent, whatever happens, I just need a shot. I’ll be ready for it.”

Pro day is a chance for players to impress NFL scouts in certain areas. Linebacker Amen Ogbongbemiga felt he did that.

Ogbongbemiga clocked a 4.26 in the shuttle and benched 24 reps of 225 pounds. Defensive tackle Cameron Murray had a solid day, bench-pressing 27 reps, which was a top-10 performance for defensive linemen in the 2020 combine. He also posted a 31.5 inch vertical and ran a 4.89 time in the 40-yard dash.

Ogbongbemiga said one of his main focuses was to perform well in the drills.

Cornerback Rodarius Williams, who finished his OSU career with a strong performance last season, posted the best L-drill at 6.91 seconds and the best shuttle time of 4.12 seconds. He also notched a 36.5 inch vertical.

Williams was one of multiple OSU players who were invited to the combine, but said having to show it all in the pro day instead is all about adapting.

“In the beginning of the season when COVID hit, you had to learn how to adapt real fast,” Williams said. “You never know what’s going to be thrown at you. So it’s our job to adapt real fast and perform the best as we can.”

The NFL draft is set to start April 29 in Cleveland.

Checking the inbox for readers' comments, and responding to their responses

If the five-star guard from Booker T. Washington needs to feel comfortable again, he should know Mike Boynton and the Boone twins would likely take care of that

Guerin-teed it was quite a week: The Cowboy I love seeing back at spring practice? Josh Sills

“Let them see the players, see some new guys, see the names they’re familiar with,” Gundy said. “Provide them with a real football game."

Oklahoma State basketball received its first commitment for the 2021 class in the form of Syracuse transfer Woody Newton.

“He’s progressing,” Gundy said. “Seeing things that we want them to see at that position like Taylor (Cornelius) and like Mason (Rudolph) did. He’s starting to see those things. We should have seen it last year but we didn’t have spring. We’re starting to see it now. He’s having a good spring practice.”

OSU conditioning levels are back to standard this offseason

“These guys are in really good physical condition now,” head coach Mike Gundy said. “Compared to when we got in August last year there wasn’t very many guys in shape so it was really scary as a coach. You don’t know when to push them."

Guerin Emig: Chuba Hubbard's final gesture as an OSU running back reinforces his impact on the Cowboy culture

Hubbard's day of philanthropy to benefit Tulsa homeless underscores his desire to make things better, dating back to last summer's episode with his coach.

Next up for OSU are the Oral Roberts Golden Eagles, which the Cowboys will host 6 p.m. Tuesday.