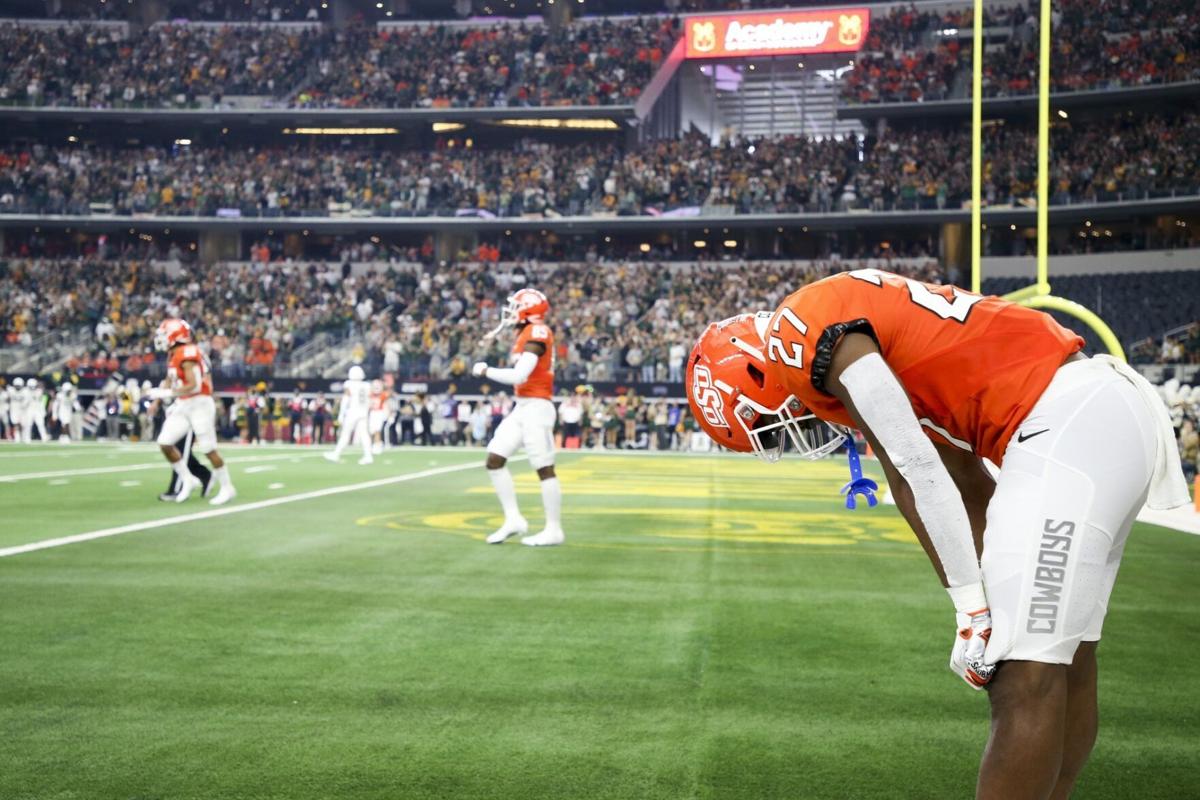 Oklahoma State running back Dezmon Jackson reacts after his team failed to score on a third down during the Big 12 Championship game against Baylor on Saturday. 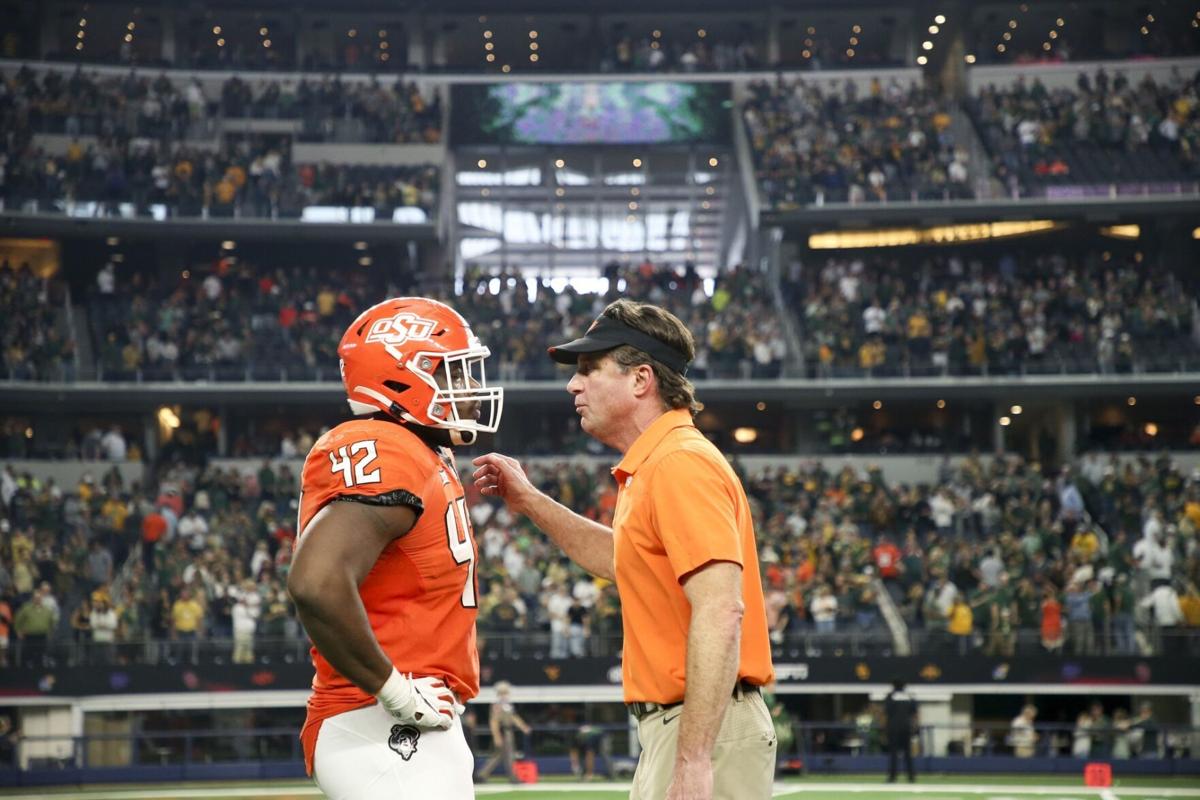 ARLINGTON, Texas — Dezmon Jackson’s dive to the end zone fell short by the length of one of Pistol Pete’s bullets Saturday. Oklahoma State lost the Big 12 Championship to Baylor 21-16, and Cowboy football became a study in regret, anguish and pride.

“We should have won that game,” distraught OSU offensive coordinator Kasey Dunn said.

That the Cowboys did not, that they absorbed their second loss of the season and let their first league championship since 2011 and their first College Football Playoff berth slip away as a result? Here came the regret.

Baylor didn’t come close to scoring a point in the second half. The Bears committed bad penalties and mishandled a bad turnover. They took their 21-6 halftime lead and practically set it on fire.

And OSU could not take advantage.

The Cowboys ran three plays from Baylor’s 1-yard line midway through the fourth quarter before settling for a field goal instead of a touchdown.

Was that a product of Baylor rising up or OSU falling down?

“Could be both,” Cowboys head coach Mike Gundy said. “We have to look as coaches and see: How was our scheme? And then you have to give them credit.”

“It lands squarely on me,” Dunn said, noting that six of those seven ill-fated goal-line plays were runs, and that Baylor, with the sixth-ranked run defense in college football, is stacked up front. “In hindsight, I should have put a little more trust in our receivers and quarterback to hook that thing up.”

Trusting OSU quarterback Spencer Sanders meant trusting a player who threw four interceptions Saturday. The Cowboys had their hands full whether they ran or threw against Baylor’s salty defense.

You have days like that, unfortunately. You could more easily rationalize that, and a lot of other things, if this game was in September.

But man oh man ... Dec. 4? In a Big 12 Championship? In a game that could have taken OSU to heights never before scaled?

It was painful to watch.

Baylor safety Jairon McVea tackled Jackson on the fateful fourth-and-goal. The Bears took over on their 1-yard line and burned the final 24 seconds with a quarterback sneak. And up and down OSU’s sideline, disbelieving Cowboys stood, sat and stared.

This was the anguish.

“I don’t know what to tell you,” linebacker Devin Harper said.

He didn’t have to say a word.

Before Harper spoke, his teammates walked an AT&T Stadium corridor toward their team bus with cement legs. It looked like someone had just told them they couldn’t play football again.

Gundy congratulated Baylor coach Dave Aranda in the middle of the field after the final gun, then went back to his sideline to get his devastated players to join him in the locker room.

“Guys are hurting in there,” Gundy said toward the beginning of his postgame press conference.

Toward the end, he turned his focus from what his 11-2 team did not do in this particular game to all that the Cowboys did in the months leading up to it.

“They’re too young to understand. They’ll figure it out. They’re just kids,” Gundy said. “I understand. For what our guys accomplished and the situation they put themselves in, I see it real clear.”

Actually, there were Cowboys who squinted through their pain and saw what their coach did.

“Not the outcome we wanted,” OSU wide receiver Tay Martin said, “but overall, I’m blessed to still have those guys.”

“It was tough sledding for us today,” Sills said, “but beyond proud of the way we fought.”

Pride kicked in before the Cowboys boarded their bus, deservedly, since no OSU football team ever made greater strides over the course of a season.

Even short of a championship, I seriously doubt any OSU team ever took its fans on a more thrilling ride along the way.

It won’t be the Cotton or Orange, the two College Football Playoff bowls.

The Cowboys won’t be wearing Big 12 championship rings wherever they go.

Many of them will still be hurting over what could or should have been.

“Everybody poured their hearts out,” Harper said Saturday before heading home.

Regret and anguish won’t be the only feelings around OSU football moving through December. The Cowboys will feel better, a little at a time, as they go.

As they absolutely should.

Cowboys' once robust running back room thin headed into 2022 season

Without Jaylen Warren, Dezmon Jackson and LD Brown, the Cowboys are set to lean on Dominic Richardson, Jaden Nixon and their freshman on the ground next fall.

Whether the Cowboys find solutions from within or through the transfer portal, Oklahoma State has problems to solve in the secondary, on the offensive line and at running back in 2022.

'This is not about me': OSU's Miller credits teammates for College Football HOF induction

Terry Miller, the second all-time leading rusher in Oklahoma State history, cast the spotlight on his former teammates on the day he the College Football Hall of Fame announced him as a member of its class of 2022.

'This is not about me': OSU's Miller credits teammates for College Football HOF induction

Terry Miller, the second all-time leading rusher in Oklahoma State history, cast the spotlight on his former teammates on the day he the College Football Hall of Fame announced him as a member of its class of 2022.

Oklahoma State forward Tyreek Smith explained the connection with Mike Boynton that brought him to the Stillwater before facing his former team, Texas Tech, on Thursday.

'The show goes on': OSU DT Brendon Evers to return for a fifth season in 2022

'He’s got it all': Cowboys have a versatile running back in Beggs' CJ Brown

Oklahoma State's early enrollee did at all as Beggs' star running back. In 2022, early opportunities lie ahead for the Cowboys' four-star freshman.

Oklahoma State's first road trip of Big 12 play in 2022 features a challenging trio of opponents beginning with the Mountaineers Tuesday ahead of visitors to No. 19 Texas Tech and top-ranked Baylor, all in the span of five days.

Cowboys head to Waco for another stiff road test at No. 1 Baylor

Miller, the second-leading rusher in program history and the runner-up for the 1977 Heisman Trophy, will become the seventh Cowboy enshrined in the College Football Hall of Fame on Dec. 6.

Oklahoma State running back Dezmon Jackson reacts after his team failed to score on a third down during the Big 12 Championship game against Baylor on Saturday.