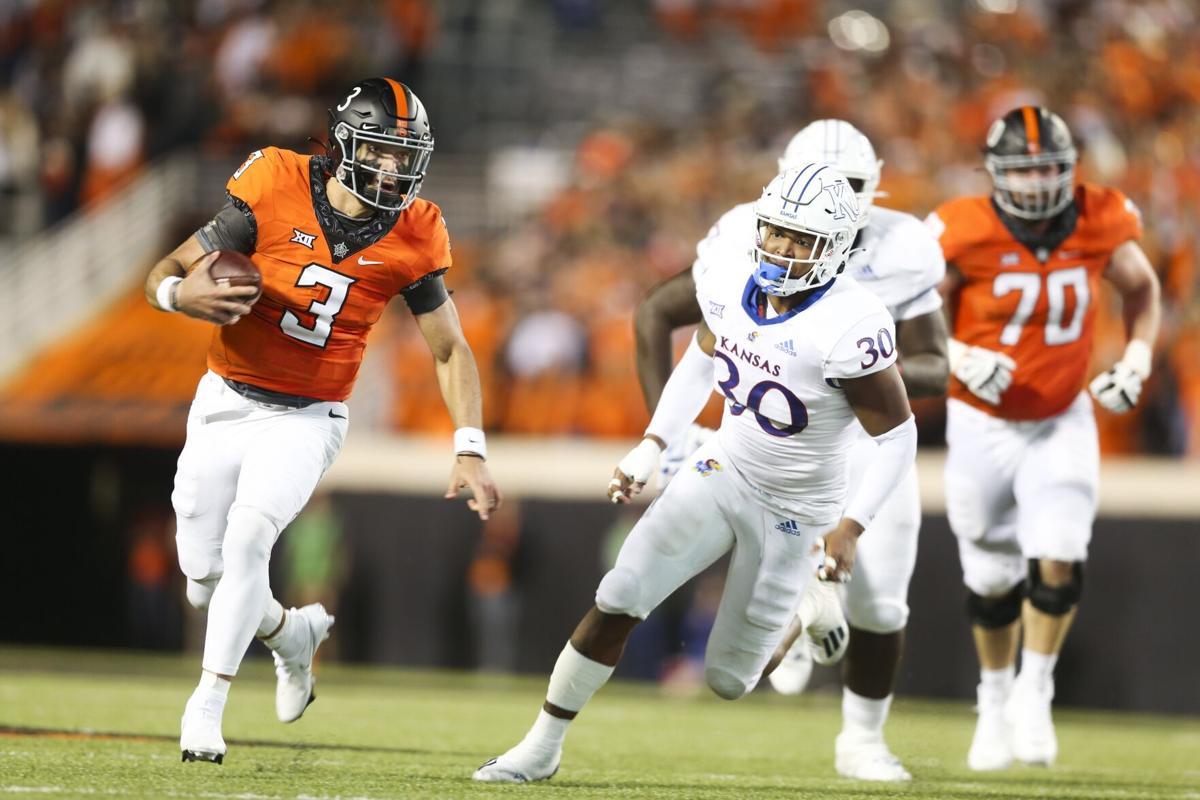 Spencer Sanders (left) and the Oklahoma State Cowboys have a shot at making this year’s four-team College Football Playoff, but would obviously fare better in an 8- or 12-team format.

STILLWATER — I have a thousand logical reasons why the College Football Playoff should expand as soon as possible, and one selfish one: an expanded CFP puts Oklahoma State in control of its destiny.

Put eight or 12 teams in a bracket, have OSU beat TCU, Texas Tech and Oklahoma to close out the regular season, then have the Cowboys beat OU again in the Big 12 championship, and the Pokes are assured their first playoff berth.

Using the 12-team format proposed by a CFP management committee group last June, the 12-1 Pokes could get a first-round bye to the quarterfinals as a top-4 seed, or a first-round playoff game in Stillwater as a 5-through-8-seed.

Either way, they’re in. Undoubtedly. Their No. 11 position in last week’s initial CFP ranking is a footnote.

Under the current, moldy four-team format, the Cowboys are likely in if they win out from here, but there is some doubt.

It is absurd that there would be.

And that makes it absurd that the 12-team expansion proposal wasn’t rubber stamped last summer so it could take effect by the 2024 season, the earliest the CFP claims the format can change.

Now, apparently, the conference commissioners in the CFP management committee and the university presidents in the CFP board of managers, the movers and shakers on expansion, are suspicious of each other due to the realignment wave triggered by OU’s and Texas’ relocation to the SEC.

Now there are 12-team and 8-team expansion factions along conference lines.

Now there are media partner concerns and corresponding financial considerations.

There are other considerations. OSU coach Mike Gundy raised one Monday.

“When you go to 12, you’re now treading into academic calendars, dead week, finals week, bowl games,” he said, “how many regular season games you have, potentially a number of games that could push right up there with an NFL schedule. And we still are working with amateur athletes. So I’m not sure that’s the answer.”

I don’t know, Mike. We’re talking about an expansion eight teams and two rounds deeper. I see more physical strain for select teams — we should allow the players the ultimate say there — but it shouldn’t tax FBS’ ample academic support staff too hard.

Also, the 12-team proposal incorporates bowls into the quarterfinal and semifinal rounds. That actually puts more annual emphasis on all of the New Year’s Six bowls, as opposed to the current format where the Rose, Orange, Sugar, Fiesta, Cotton and Peach rotate hosting the CFP semifinals every three years.

Here’s where I land, Coach, based on current events:

I have seen enough college football this year to know that your team, should it go 12-1, beat OU twice and win a Big 12 championship, should not have to worry about making the playoff.

I know that your defense, the best college football unit I’ve seen outside of Georgia’s defense, should not have to worry whether it has done enough to deserve a playoff shot, assuming that defense stakes your team to a 12-1 record.

I know I am a sucker for fantastic stories in my neighborhood. An OSU football season where you finally reach the Big 12 championship game, you finally conquer OU to get there and win it, you finally arrive at peace with your administration and your old pal Barry Sanders finally is immortalized outside your stadium?

That’s too fantastic a story to end anywhere but the playoff.

“The eight-team (playoff) that I mentioned five or six years ago,” Gundy said, “I still think is the best concept for everybody in college football.”

Eight is better than four, but 12 is better than eight. Twelve includes the six highest-ranked conference champions (so long, Group of 5 snub), rewards 1-through-4 seeds with byes, puts 5-through-12 first rounders on campus, and grants bowl partners the quarterfinals and semifinals.

An eight-team 2021 playoff includes a 12-1 OSU squad, but a 12-teamer strengthens the Cowboys’ position.

“Since they’ve had these conversations (last June) we’ve had other areas that are drastically changing college football with the NIL (name, image and likeness) and the transfer portal and all these different things,” Gundy said. “There is a considerable amount of information to consider. And I think that this could be a very pivotal time for college football. We have a good product right now, a really good product, that’s driving the television market. People love college football.

“So I’m a little concerned about whether we need to really fix something that’s not broken.”

Oh, we need to fix it. We were on track to fixing it five months ago.

We need the commissioners and presidents who can decide to fix it to get back on track and hammer out an agreement that busts the four-team mold.

This year’s OSU football team can’t reap the benefits of that change.

But the Cowboys can justify that change, provided they keep winning.

The No. 10 Oklahoma State Cowboys (9-1) routed TCU on Saturday night. See all of our coverage here:

Spencer Sanders (left) and the Oklahoma State Cowboys have a shot at making this year’s four-team College Football Playoff, but would obviously fare better in an 8- or 12-team format.